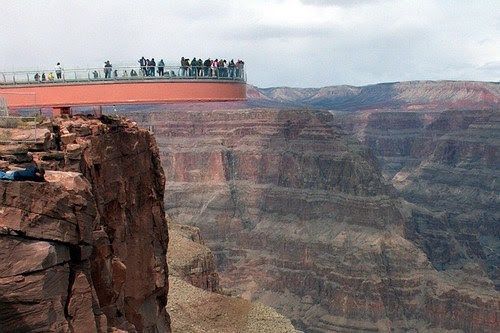 The Grand Canyon Skywalk is a transparent horseshoe-shaped cantilever bridge and tourist attraction in Arizona near the Colorado River on the edge of a side canyon in the Grand Canyon West area of the main canyon.
This steel and glass walkway extends 70 feet (21 meters) over the lip of the Grand Canyon, almost one mile above the valley floor. The 90 tons of glass were imported from Germany. The Skywalk, which is bolted to the canyon?s rim, can support the weight of 70 747 passenger jets.

9. The View from The Shard ? England 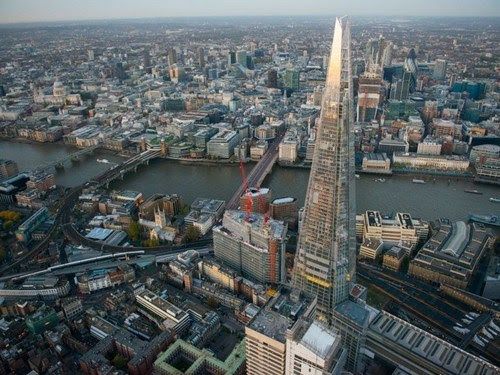 London?s highest and best view. The Shard is the tallest building in Western Europe and The View From The Shard is located on floors 68, 69 and 72.
The best panoramas are from floor 72, at a height of 800 feet (244 meters).
This open-air observation deck offers 360-degree views of the city.
Visitors can also look up into the ?shards? of glass that form the top of the skyscraper.

This lookout platform provides mind-blowing views of the surrounding mountains and Aurlandfjord. A must do if you?re not afraid of heights.The glass panel at the end of this walkway gives visitors the impression they could simply fall off the end.
Commissioned by the Norwegian Highway Department as part of a project to improve the appearance of the country?s tourist routes, the lookout allows visitors to look straight down into the Aurlandsfjord, 2,000 feet (609 meters) below. 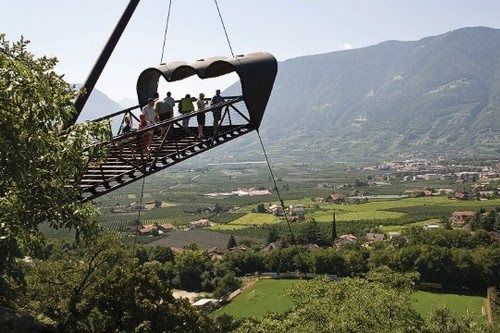 The best views of Italy?s Merano region are from this binocular-shaped viewing platform, high above the gardens? huge oak forest.
The viewing platform is just one of several within the gardens, which were recently named Italy?s most beautiful gardens.
The platform is suspended over the Gardens of Trauttmansdorff and was designed by architect Matteo Thun in 2005. 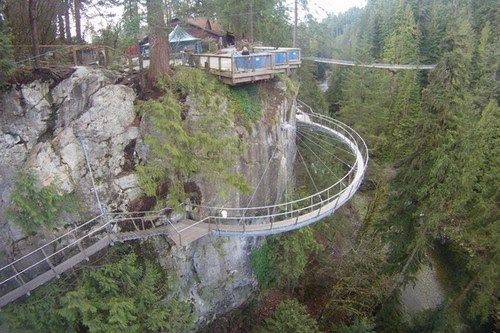 The Cliffwalk is a 700-feet (213 meter) walkway attached to a granite cliff face above the Capilano River in British Columbia, Canada. The highest point is 300 feet (90 meters) above the river.
To attach the Cliffwalk, 16 anchor points were drilled 19 feet (six meters) into the rock face using 1,825 bolts, and 40 tons of steel were used.
The Cliffwalk also features two glass panels that have an anti-skid finish and were shipped over from Austria. 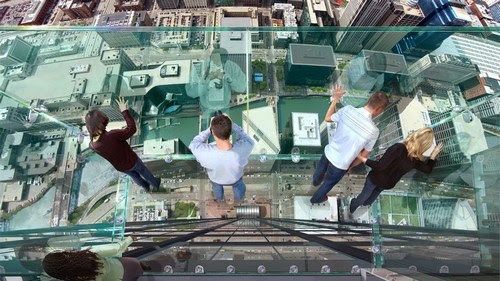 At 1,353 feet and 110 stories above the streets of downtown Chicago, The Ledge at Willis Tower?s Skydeck will transform any visitor?s?or local?s for that matter?experience with the Windy City. The four boxes that make up The Ledge experience in Willis Tower, are made from half-ton panels of glass. The walls consist of three layers, each half an inch thick.
Visitors who step into one of the boxes can see for 50 miles across four states. Six million people have ventured into the boxes since 2009, 500 people have proposed in them and visitors can now even get married in them. The boxes retract into the building when the windows need cleaning. 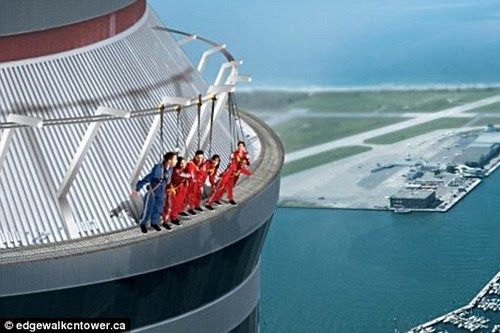 EdgeWalk is CN Tower?s most thrilling attraction in its history, and the first of its kind in North America. Located on the roof of the CN Tower?s restaurant at a height of 1,168 feet (356 meters), it is the world?s highest full circle hands-free walk.The EdgeWalk allows visitors to slip into climbing harnesses and walk around the edge of Canada?s tallest structure.
There?s also a glass floor 1,122 feet (342 meters) above ground level, and although the glass is only 2.5 inches thick, it?s reportedly strong enough to hold 14 hippos ? if they could fit in the elevator. CN Tower also has glass-floored observation deck and outdoor SkyTerrace. 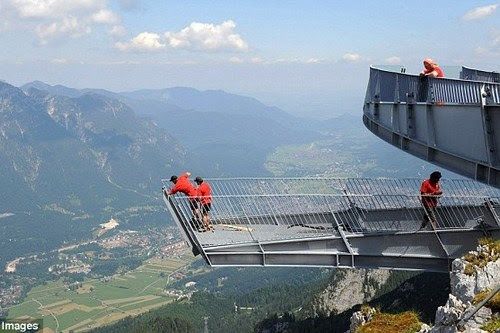 At the base of Alpspitze peak, visitors will find the AlpspiX Viewing Platform hovering 13 meters (42 feet) over an empty void in the shape of an ?X? with two protruding platforms.
The towering structure is situated in the Garmisch-Partenkirchen region of the country and provides panoramic views of surrounding Hoellental and Garmisch.
Visitors brave enough to walk to the end of the glass-walled platforms can look 3,281 feet (1,000 meters) down into the valley. The platform remains open in winter, when the grid flooring allows snow and ice to pass through. 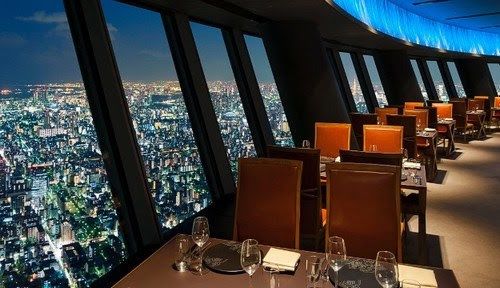 The Tokyo Skytree is the world?s tallest tower, third-tallest structure, with a height of 2,080 feet (634 meters), and has Japan?s two tallest observation decks: the lower one is located at 1,148 feet (350 meters) and has a section of glass flooring. The upper one, which has floor-to-ceiling windows and 360-degree-views of the city, has a height of 1476 feet (450 meters). On a clear day, Mount Fuji can be seen from the observation decks. 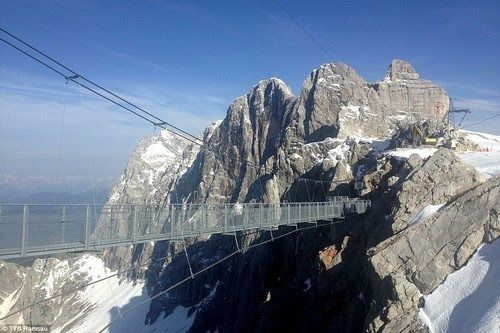 Situated near the town of Schladming. The 100m long suspension bridge offers spectacular views of the Alps, but at such dizzying heights only the bravest are likely to test their mettle.
Visitors to Dachstein?s Stairway to Nothingness must first cross Austria?s highest bridge, with a 1,300ft drop to the bottom of the mountains. They then face 14 steps that descend from the cliff face and which are surrounded by glass walls.
The entire structure took six months to build and was created by an engineering firm specializing in high-altitude construction.The bridge that leads to the steps is the highest in Austria.