They have traveled the world for the chance to ride the monster waves that roll into a California bay some winters – and the world’s best surfers weren’t left disappointed on Friday.
Forecasters had predicted that weather and swell conditions could create wave faces of more than 40ft, giving competitors just 48 hours’ notice that the contest was on.
The Half Moon Bay event, near San Francisco, is famed for its monster waves, and conditions are so perilous that only 24 world-renowned surfers were invited to take part.

Swell: Peter Mell, who won last year’s event, catches a wave in the first round of the Mavericks Invitational surf competition 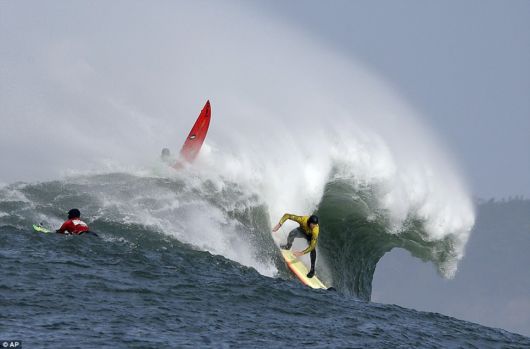 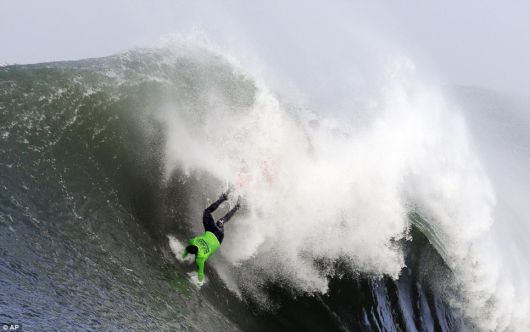 Wipe out: Ben Wilkinson plunges into the wall of water after losing his footing in the third heat

Heading out: A surfer paddles back out of the bay at the Mavericks contest From 8am the small band of pros have been competing in six-man groups, as judges marked them on the quality of the wave, difficulty of the drop and overall performance.
The surfers wait for their perfect wave about half a mile from shore, and have spare boards tied up near by. On the beach, crowds of spectators line up to watch and enjoy the festival that takes place around the competition.

Because the contest is held only when the famed monster breaks are expected to roll in, no one is sure from year-to-year when the next event will be held, and surfers have just 48 hours’ notice.
Despite being only open to the most experienced surfers, two pros have died at the bay, including the legendary Mark Foo from Hawaii, who drowned there in 1994.
Jamie Sterling, who traveled from Hawaii to take part in Friday’s event, told SF Gate: ‘You can’t compare this place to Hawaii. It’s got cold water, giant sharks, giant waves and giant rocks. It’s like nothing else.’ 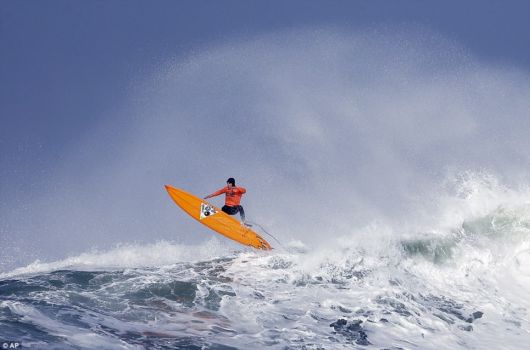 Pro: Tyler Fox flies out of a wave in the second heat of the Mavericks 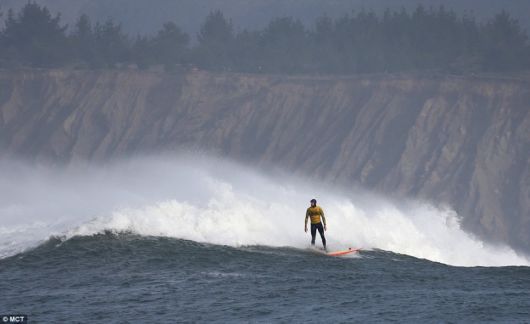 Exhilarating: Ryan Seelbach looks over his shoulder as the wave he just surfed comes to an end 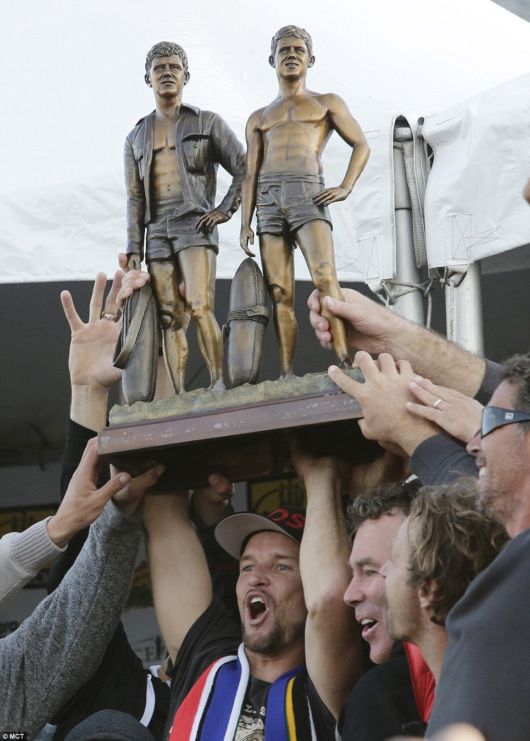 Champ: Grant Baker holds the trophy over his head after winning the perilous competition 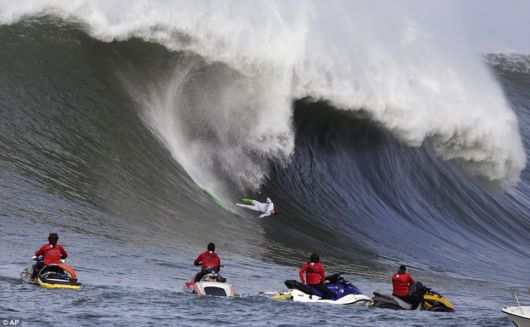 Fall: Nic Lamb takes a tumble after taking on one of the monster waves Perfect timing: A group of surfers wait for the right wave as the contest got underway just after 8am The Mavericks Invitational began as a contest in 1999, and Friday was the ninth time it was held.
But the monster waves were first ridden by dare-devil surfer Jeff Clark, who studied the ocean off the bay when he was 17, and had enough courage to try to master it.
It was 15 years before anyone else was brave enough to join Clark on the Mavericks, which he named after his dog, according to the Santa Cruz Sentinel.
The massive waves are created by a combination of winter storms racing in across the Pacific, and a steep ramp on the sea floor, which suddenly drops to create the perfect surf launch pad.
This year the trophy went to Grant Baker. The 40-year-old from South Africa is considered one of the world’s best big wave surfers, and had won the Mavericks contest before, in 2006. 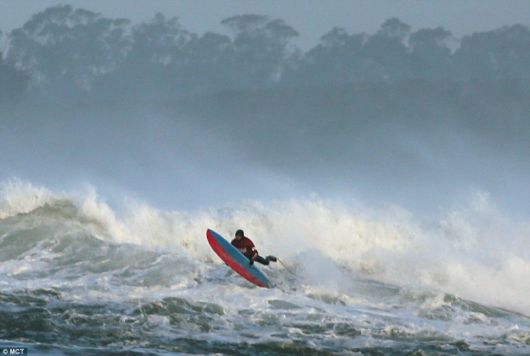 Rough: Jamie Sterling kicks out after riding a wave in the churning sea 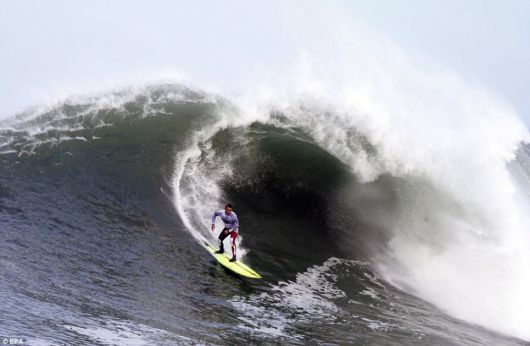 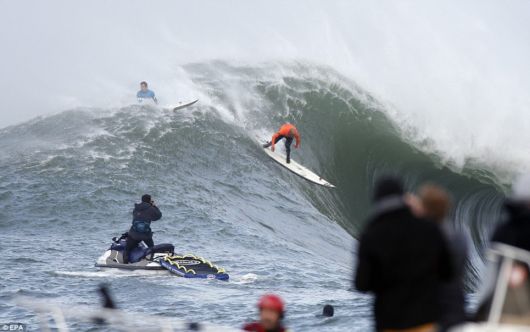 Brave: Shane Dorian takes on one of the massive waves at Half Moon Bay 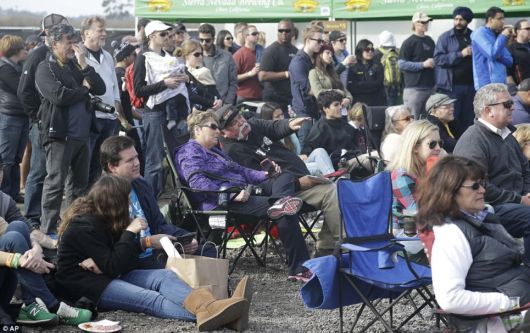 Safe on dry land: Spectators line the beach to watch the professionals in action 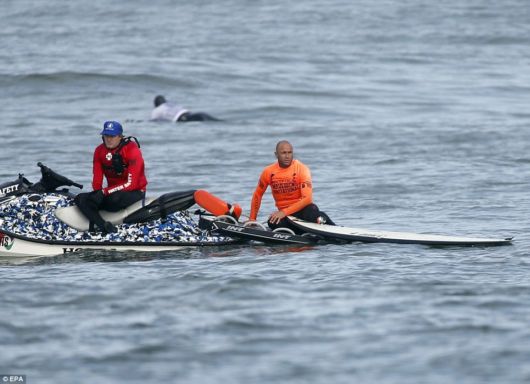 Waiting game: Shane Dorian watches the competition as he waits for his turn to ride 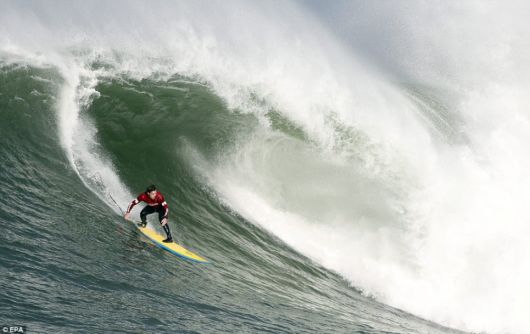 Awe inspiring: Colin Dwyer cruises down a wave as it curls and crashes around him

Dramatic: Tyler Fox is reflected in the wave beneath him as he surfs on Friday 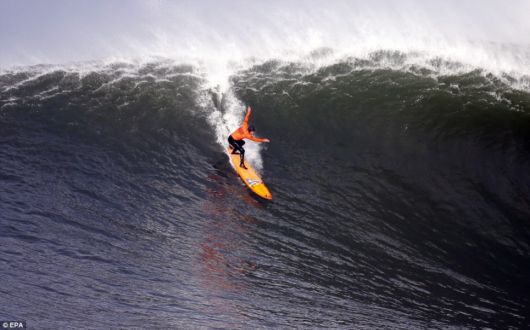 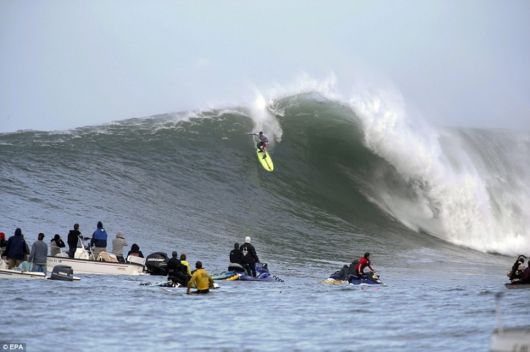 Dare devil: Anthony Tashnick looks at ease as he masters the Half Moon Bay conditions 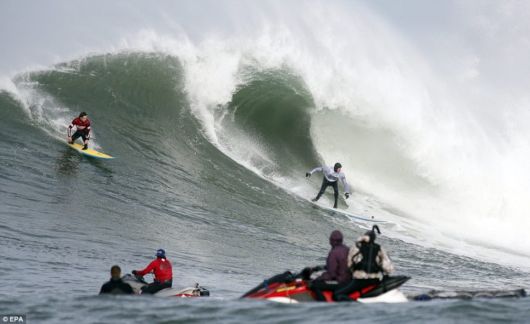 Race: Colin Dwyer, left, and Grant Washburn, ride the same wave in an early round of the contest