On top of the world: Daring photographer scales sky-high buildings to take stomach-churning shots of the Earth below

Meet the real-life sky walker – the photographer who risks his life scaling sky-high buildings to take incredible photos of the world below.

He began climbing onto the roofs of houses to capture spectacular views from the air, before deciding to go to even greater heights.

Together with his fearless friends and models, he has sneaked past guards at some of Moscow’s tallest structures – to produce incredible yet stomach-churning images. 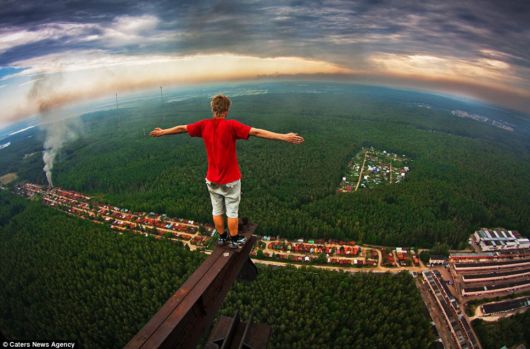 Scared of heights? Russian student Marat Dupri doesn’t seem to be, as he photographs amazing views from sky-high structures around Moscow

The incredible photos show the teens walking in the sky, as they perch hundreds of feet in the air on pylons, or walking on the edge of a high building with NO safety harnesses.

Marat said: ?When I am on the roof I have a feeling that the whole world is by my feet.

?All my problems and trouble are left somewhere down. The height exhilarates me. I am enjoying with my home town views. It gives me energy and fills with enthusiasm to make new and great shots.

?I had always been interested in photography and a couple of years ago, I bought my first proper camera.

?I wanted to try and get the most spectacular pictures I could – pictures like no-one else had taken before.

?I began by taking pictures from my own roof, but soon I wanted to get bigger and better pictures. 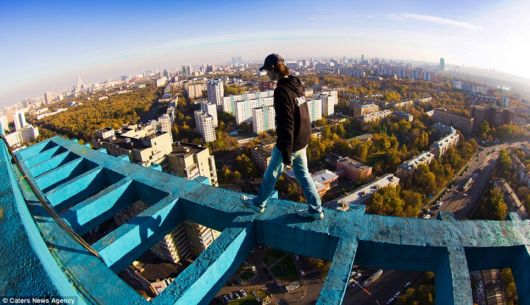 Quick learner: Dupri only bought his Canon camera 18 months ago but seems to be getting into the swing of using it and finding artistic inspiration

Quick learner: Dupri only bought his Canon camera 18 months ago but seems to be getting into the swing of using it and finding artistic inspiration

?So I went with my friend to the top of a 33 storey building. It was about 120 metres high and we went right out to the edge and I started taking pictures.

?It was such a thrill, we couldn’t wait to do it again.

?I’ve taken a lot of the photos by sneaking past guards and getting access to structures illegally.

?But I think the risks are worth it to take such amazing pictures.?

Marat’s incredible pictures show several of his friends balancing on the very edge of beams hundreds of feet above the ground.

They are not attached to any safety harnesses and could plummet to earth at any time. 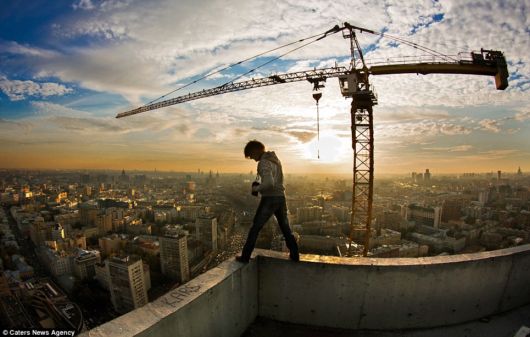 Desperate measures: Dupri says he has sneaked past guards to get access to structures illegally, but says it was worth every risk

One photo shows the teens scaling one of Russia’s seven Soviet skyscrapers, using a ladder to scale the side of the building.

And another shows his friend perched at the side of a monument to Peter I, 215 metres in the air.

The teens even took photos on the top of the Moscow tower – one of the highest buildings in Europe.

Marat added: ?The building is 300 metres up in the air and it was really difficult to take photos because of the wind. I had to bend right over and just take a picture straight down.

?That was the most dangerous photo I have taken, it was pretty scary.

?I’ve also taken pictures from a 270 metre high radio mast that was still in use.

?I got a huge adrenalin rush from taking the pictures, but I had a severe headache for several days after – I think it was from radiation.

?It was worth it to get such amazing photos though.? 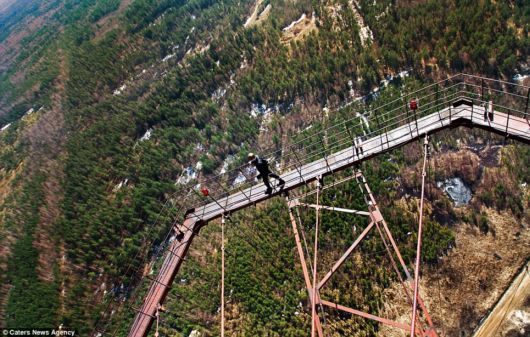 Higher and higher: The student says ‘I began by taking pictures from my own roof, but soon I wanted to get bigger and better pictures’