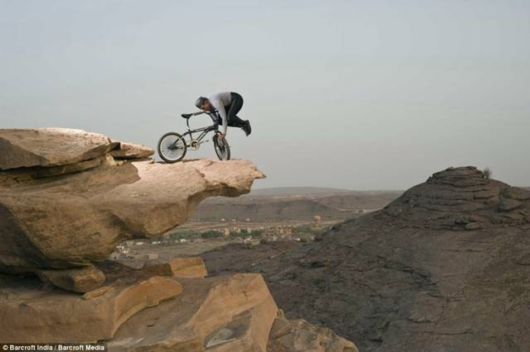 Yoga master: Khiv Raj Gurjar thinks nothing of executing a few complex poses atop a rocky outcrop at dawn each morning

Expertly balanced 300ft up a rock face, Khiv Raj Gurjar is the world’s finest exponent of Extreme Yoga. Using only a BMX bike for support, 61-year-old Khiv takes the ancient art of meditation to new levels as he performs complex forms of yoga merely inches from the sheer drop. Travelling to the top of the rocky outcrop near to his home of Jodhpur in the Indian state of Rajasthan, Khiv begins his exercises at dawn, so as to avoid the raging desert heat. 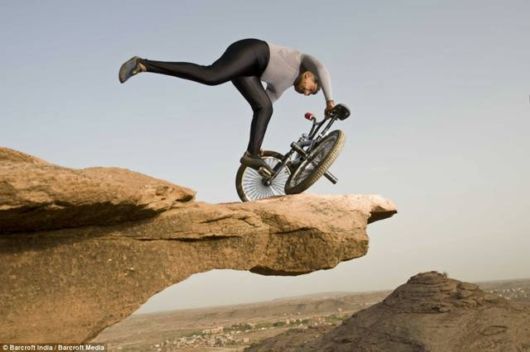 Balancing act: The 61-year-old has studied yoga since the age of 13.

A student of yoga since the age of 13 and a keen sportsman, Khiv has combined his other great love, cycling, to create his new and extreme form.

‘From my childhood I was passionate to do things which are extraordinary and look very dangerous,’ says Khiv.

‘As I grew into my twenties I found combining yoga and cycling stunts would be something very unconventional, but also deeply challenging.’

Presently able to perform up to 36 individual yoga poses on his bike, adventure enthusiast Khiv does his yoga exercises for one hour every day.

‘I practise and exercise every day of the year,’ explains the yoga master.

‘This is enough time for me as I have been doing this since my childhood and I am very good at it.’

Khiv feels that his yoga, which takes him up clock towers in crowded bazaars and to the top of ancient forts is not only soul enriching, but exciting too. 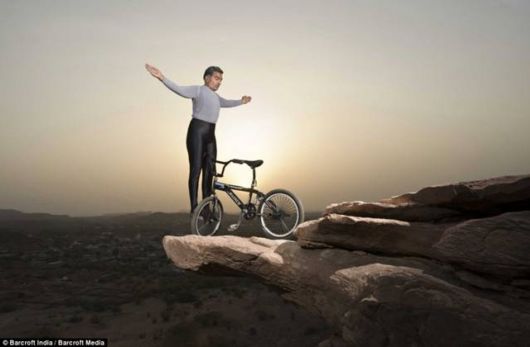 Dawn rising: Khiv prefers to exercise at the start of the day, so as to make sure he avoids the raging desert heat.

‘For me, it is like when children get excited about something that they do not have any reason for,’ explains Khiv.

‘That is the case with me. I am crazy about performing it. And as it is dangerous so much the better.’

A natural athlete, Khiv has represented his country at a national level as a cyclist and even competed in his country’s national football league.

‘I like adventures and I actively search for those that can suffice my appetite,’ Khiv says.

‘In addition to my yoga and cycling I do acrobatics, bodybuilding, football, mountaineering, trekking, rock climbing.’

Very much active for a man of his age, Khiv has no plans to retire to a quiet garden to a more sedate form of yoga.

‘I perform for my personal satisfaction and I always want to be best,’ says Khiv.

‘Whatever sport I played or exercise I did, I did it for my self. But my passion brought me to the top. 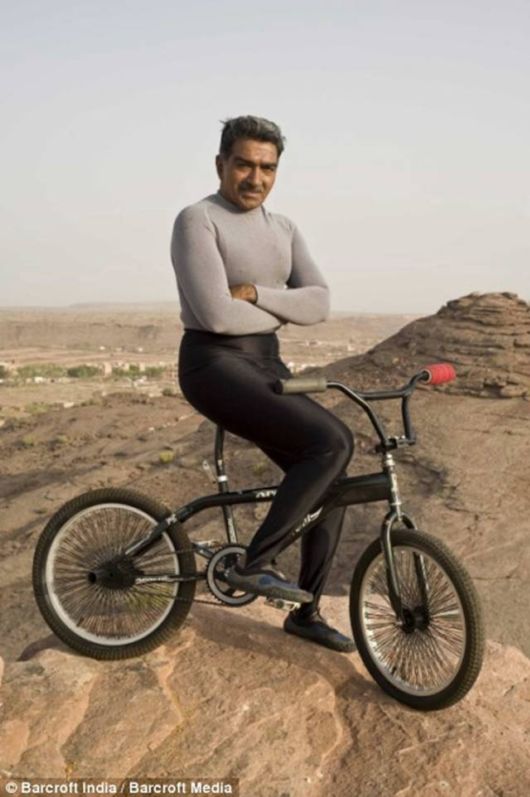 Perfectionist: Khiv says he performs for his own personal satisfaction and is driven by his urge to be the best.

In a country not known for a history of extreme sports, Khiv and his inspiration stand out.

‘I have never liked cricket. There is no question of playing, I haven’t ever watched it, even on TV,’ he says.

‘My hero is Pele. He was poor but achieved great things with his natural talent.’

It is not just Khiv who has dedicated his life to keeping his body a temple.

‘My wife Kamla never worries about my desire to push myself to the limit,’ says Khiv.

‘She works in the gym I run and was fully aware of my passions before we got married. In fact she gives me all the moral support that I need.’

It is no surprise then that Kamla and Khiv’s son Harish is also heavily involved in fitness.

‘My son has followed his father’s example to be a fit and healthy man,’ says a proud Khiv.

‘He has become a personal trainer to the stars, such as Bill Gates and Daniel Craig.’

Having been perfecting his extreme yoga for almost 50 years, Khiv has travelled the world to demonstrate his skills.

‘I have been to Australia, the UK and Thailand, taking my trusted BMX with me,’ he says.

‘I have plans to develop my art, but I am keeping these plans close to my chest. 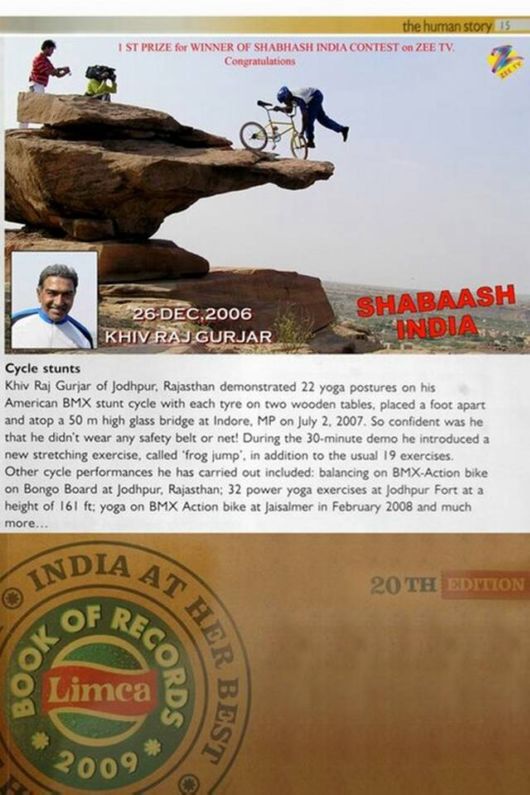 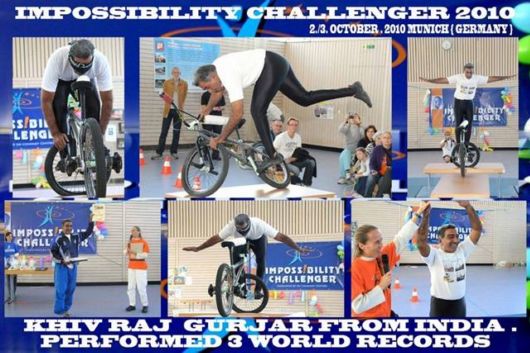 During the Impossibility Challenger on the weekend of 2nd and 3rd October 2010 in Dachau near Munich eleven participants from seven countries set 4 Guinness World Records, 11 world records and 4 personal records on the grounds of the sports club ASV.

Yoga asanas are relaxing and improve your health. But doing 41 yoga poses and stretching exercises in 5 minutes 19 seconds and 31 poses in 4 minutes 5 seconds balancing on a BMX Bike without touching the ground is a challenge. 58-year-old Khiv Raj Gurjar traveled from Jodhpur in India all the way to Germany to accomplish these feats. Khiv Raj Gurjar, who studied yoga since the age of 13 and meditates regularly, balanced also for 11 minutes 18 seconds on a BMX Bike without contact with the ground. His three world records were part of the 17th edition of the Impossibility Challenger organised by the Sri Chinmoy Centres. 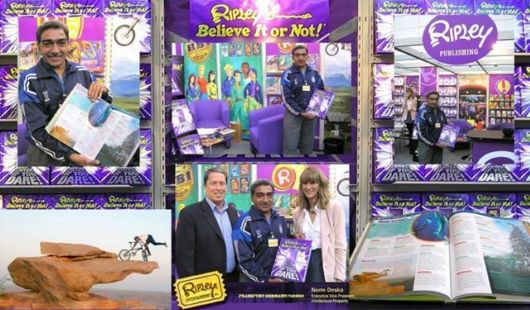 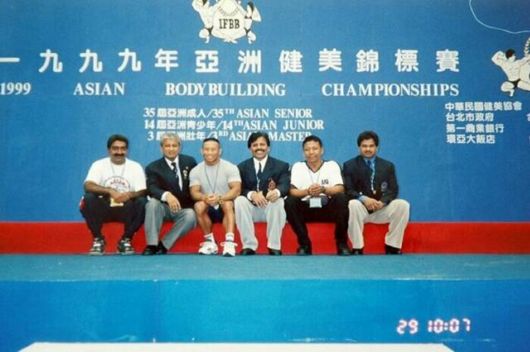 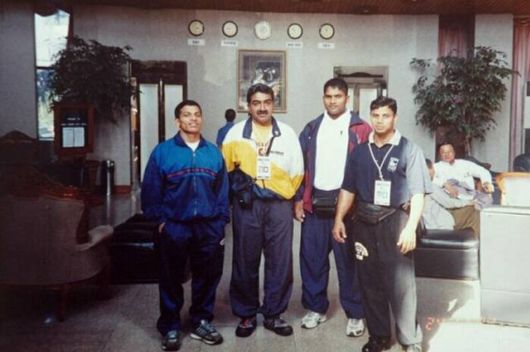 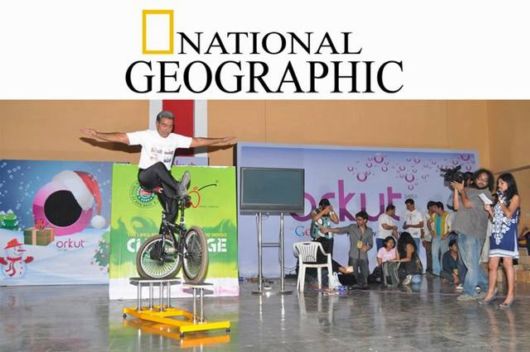 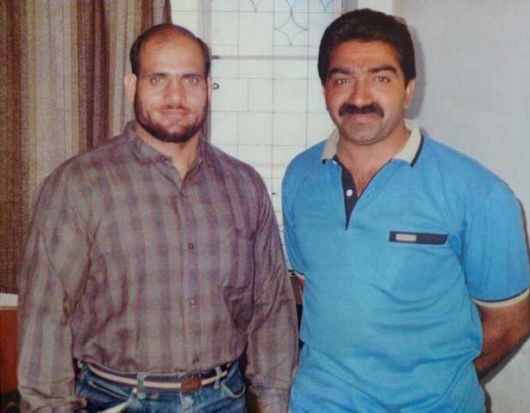 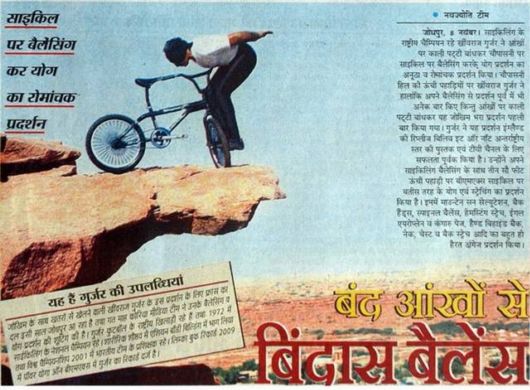 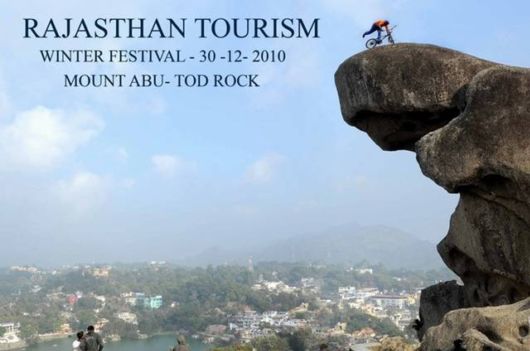