How’s that for balance?

Faith Dickey, 23, completes stunt with seconds to spare before tunnel

Walking along a tightrope would be terrifying enough for most people.

Add two speeding trucks at either end of the cable and the feat suddenly seems more like an impossible scene from a Hollywood blockbuster.

But for one young woman it provided the perfect adrenaline-inducing stunt to show off her impressive highlining skills.

American slackliner Faith Dickey, 23, became the first person to perform such a death-defying exploit on an unopened stretch of a new motorway in Croatia, with no oncoming traffic. 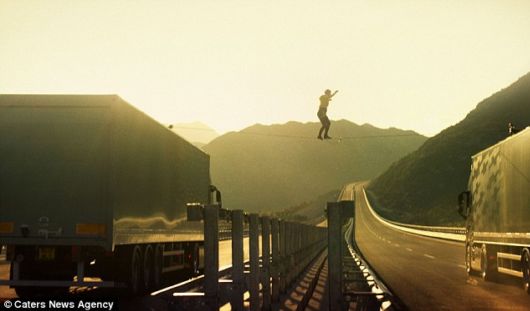 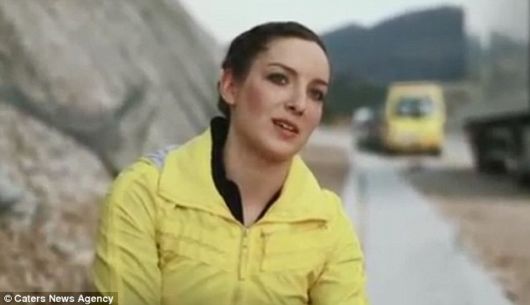 Relieved: Having survived the dramatic stunt, Miss Dickey said that this particular one was the most terrifying that she had even done

After fastening the tightrope between the two trucks, Miss Dickey limbers up and crosses the wire while both vehicles are still.

But the feat suddenly becomes much harder as they speed along the fresh tarmac with the central barrier of the road separating them.

Miss Dickey makes her first attempt and just a few feet in wobbles and falls, narrowly clinging on to the wire and hauling herself back up. 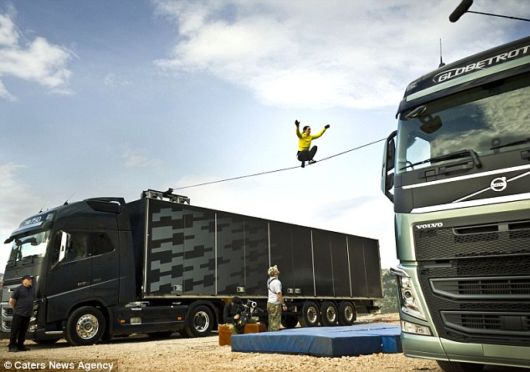 Limbering up: Miss Dickey practices the dramatic stunt while the two wagons are parked up and a crash mat is below her 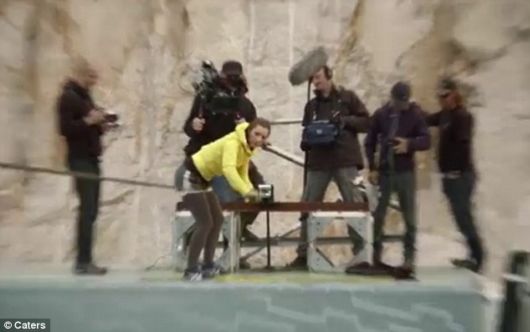 Film crews who have worked on blockbusters such as James Bond, Harry Potter and Pirates of the Caribbean, prepare to capture the crossing 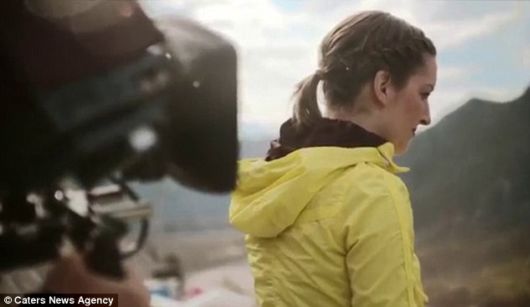 Nerves: Miss Dickey – a world record holder in highlining – psyches herself up as she prepares for the most difficult stunt of her career 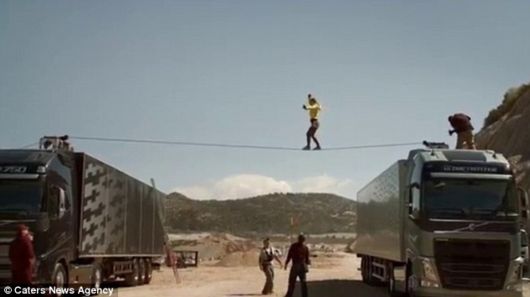 The stunt woman makes good progress on stationary practice runs, signalling that she’s ready to attempt the same crossing while the wagons are rolling

With the wind speed battering her, and legs shaking vigorously, she continues her precarious walk between the two wagons.

In a dramatic finish with seconds to spare, she leaps onto the wagon before it speeds through a tunnel.

Miss Dickey, who is the world record holder for highlining, said that the stunt was one of the most terrifying she has done. 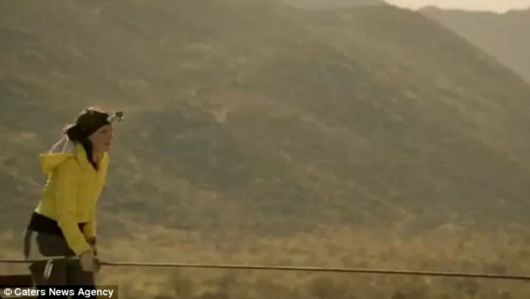 Cautious: As the trucks pull off, Miss Dickey checks everything is in place before she makes her first tentative steps across the rope 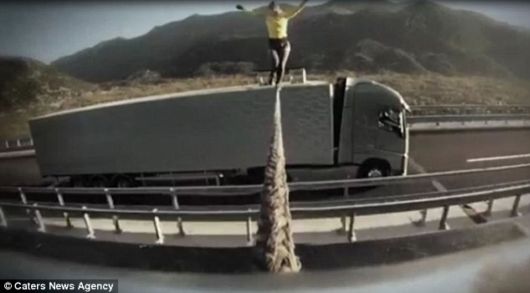 Progress: The stunt appears to be going well, with the daredevil holding up well despite the wind battering her and shaking the rope 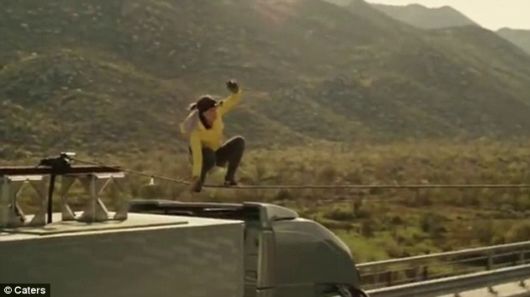 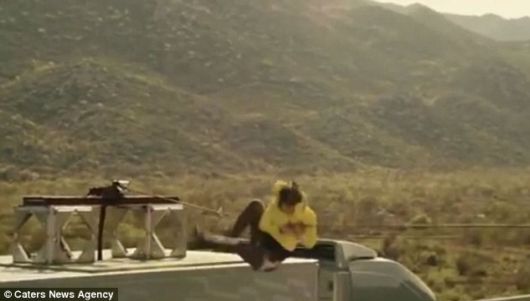 Disaster: One wrong foot placement and Miss Dickey slips, only just managing to hold on to the rope to prevent her from dangling upside down by a safety catch on her ankle 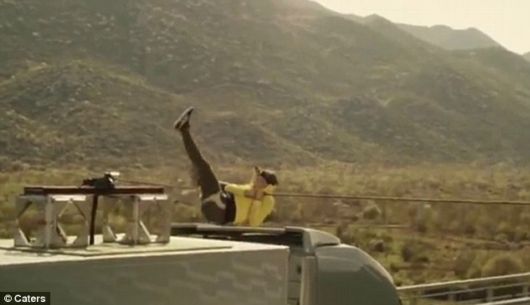 Near miss: With her legs in the air, Miss Dickey swings on the cable desperately trying to keep alive her adrenaline-inducing crossing

She added: ‘I’m used to heights, long lines and lines that sway in the wind. But those lines are firmly anchored to cliff-faces.

‘Walking a line attached to two moving points is something quite different.’

Peter Pedrero, who normally works with stunts in films such as James Bond, Harry Potter and Pirates of the Caribbean, worked with Faith to create the stunt.

He said: ‘And here was I thinking that every imaginable stunt had already been done. The fact is that nobody has ever before walked a line between two moving trucks. 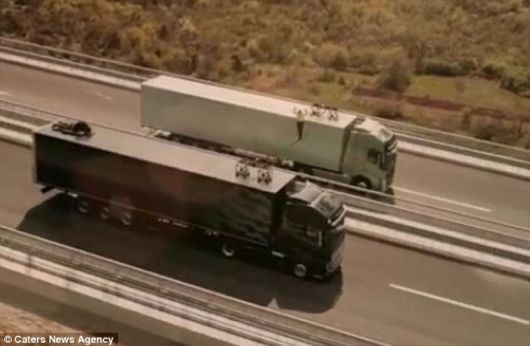 Having regained some stability, the balancing expert is able to continue the exploit with the trucks speeding along the unopened motorway in Croatia 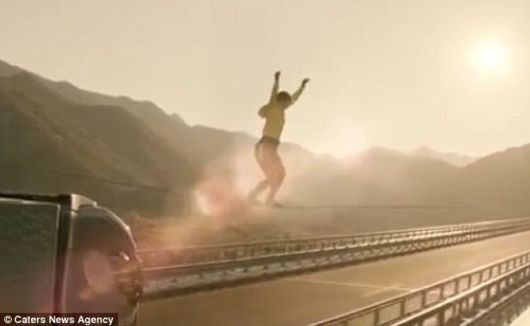 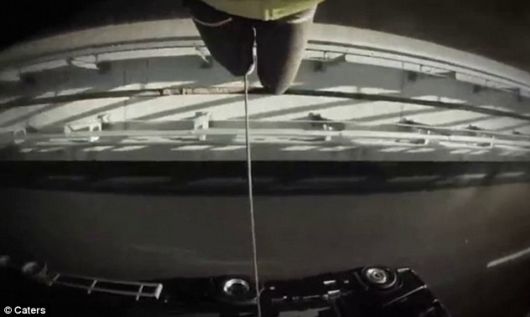 Don’t look down! A shot from Miss Dickey’s helmet camera shows the view she will have had of the road below, which had no traffic on it at the time of the feat 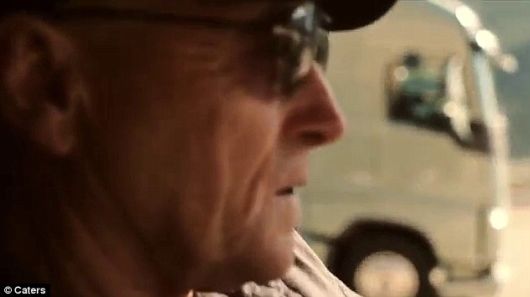 Tension: The experienced truckers are pictures of concentration as they use their own steady hands and feet to keep their vehicles at a consistent speed

‘It felt like an enormous challenge, and it’s challenges that get me going.

‘Stunts are not for the reckless. Safety always comes first. You have to prepare for the worst possible scenario at all times, and plan for how to deal with it.

The feat was recorded in a dramatic video against the orange hue of the sun. 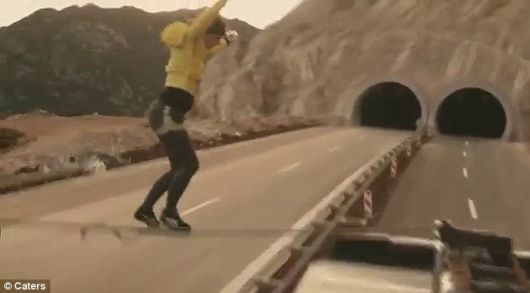 Miss Dickey is almost across the wire as the wagons approach a tunnel. If she doesn’t make it across she will be killed and if the vehicles begin to slow she will lose her balance and fall anyway 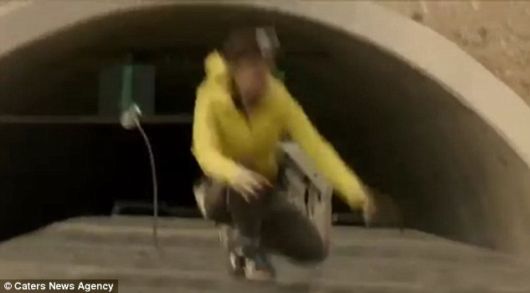 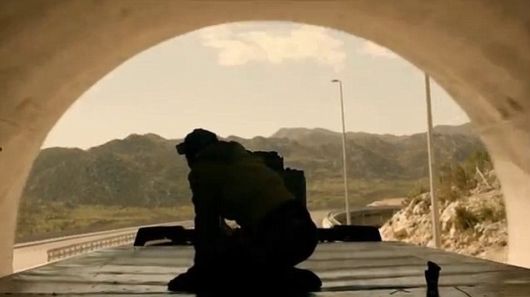 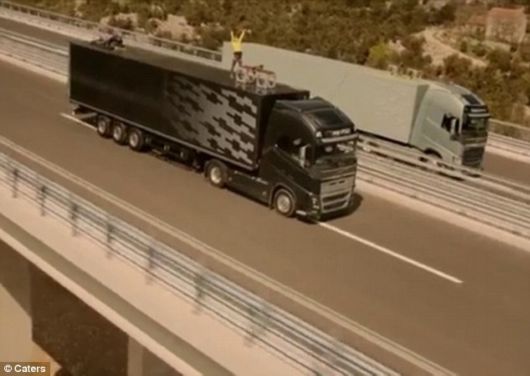 We made it! Miss Dickey raises her hands in celebration after completing the dramatic stunt

Video Director Henry Alex Rubin said: ‘My favorite kind of shoot is when someone tells me something is impossible to film. When I hear no, it makes me want to move mountains.

‘Faith Dickey is the same way. Tell her ‘no’ and it will fuel her. She humbled and amazed myself and the entire crew with her courage.

‘This stunt started off as a way to test the precision of Volvos massive 16-wheeled trucks and ended up being just as much a testament to guts and courage.