What a MARVEL! The blue and red lizard with a striking resemblance to comic book superhero Spider-Man

One has to wonder whether this lizard’s spider-senses are tingling. For the reptile bears more than a passing resemblance to the Marvel comic superhero Spiderman.

The lizard’s amazing red and blue markings are strikingly similar to the suit worn by the crime-fighting, web-weaving daredevil.

And – as the reptile was captured crawling around on his rock – he appeared to strike an identical pose to Spidey’s favoured crouching pose. 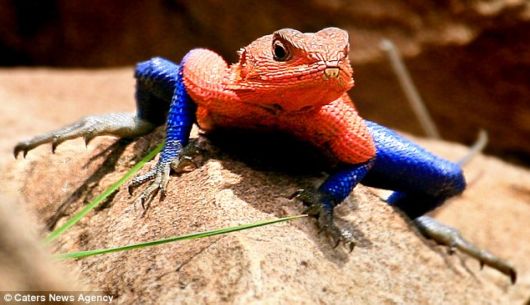 The lizard is a Mwanza Flat Headed Agama, which are native to Africa and usually live in groups with one dominant male – usually the most colourful.

Rich Nunn from Nostalgia and Comics in Birmingham said the resemblance was uncanny.

He said: ‘This is the only animal I have ever seen with colouring so unbelievably similar. It’s especially like Spiderman in the chest, arms and legs.

‘His colourings are extremely bright making him look like he’s dressed in a suit – crawling around on the rock. 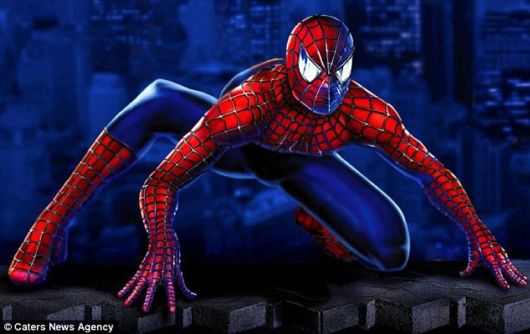 ‘I’m sure there are loads of comic fans who would want a lizard like this one because it looks so much like their hero.’

The colourful creature was captured on camera by photographer Cassio Lopes on a trip to the Masai Mara National Park in Kenya with his wife Alessandra.

The 38-year-old, from Sao Paulo, Brazil, said: ‘We were on a photography workshop and on one afternoon we were parked for a couple of hours near Rongai river.

‘It was dry at that time of the year and we’d been told a female leopard had been seen in the morning roaming around so we decided to spend some time there looking for it. 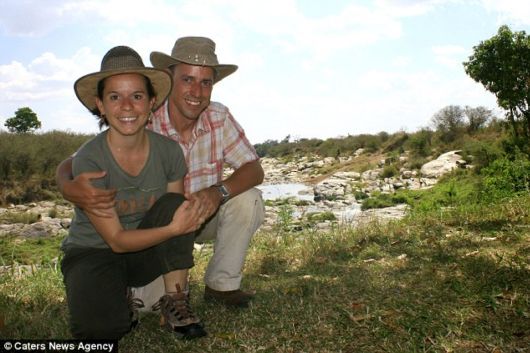 Lucky shot: The image of the lizard was captured by photographer Cassio Lopes (right) while he was on holiday in Kenya with his wife Alessandra (left)