A British photographer’s adorable images of puppies, ducklings and even kittens in hammocks will brighten up any rainy day.

Master of cuteness Mark Taylor’s images are in demand all over the world for the purr-fect way they capture a softer side to ourbest-loved animals.

His photographs are a legacy from his late mother Jane Burton who pioneered the style so familiar on calendars in offices and mathsteacher classrooms everywhere. 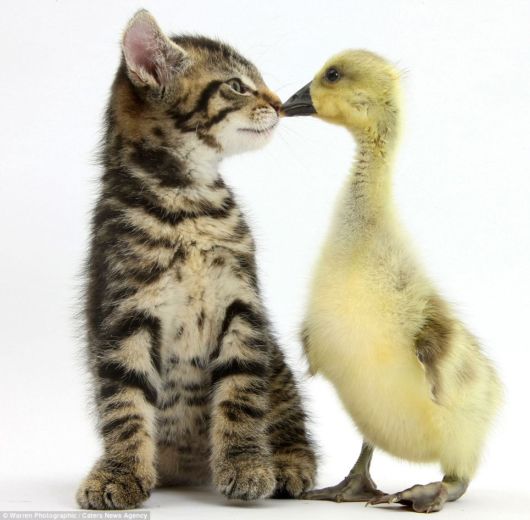 Fosset the kitten with a yellow gosling: Photographer Mark Taylor is famous around the world for his cute shots of animals in unusual poses 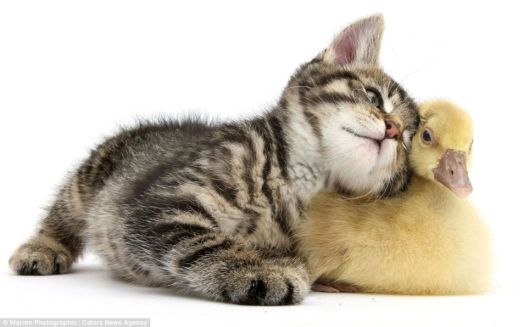 Fosset cuddles up to his gosling friend: Mr Taylor’s photographs are a legacy from his late mother Jane Burton who pioneered the style 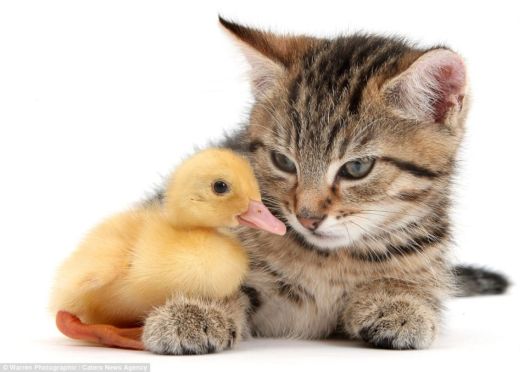 Stanley the kitten with a duckling: Despite the menacing look in Stanley’s eyes, Mr Taylor has never had any incidents where one subject ate another Using a simple clean white background and some unusual animal pairings Mr Taylor’s style has seen him make the cover of prestigious wildlife magazine National Geographic.

In this set of heart-warming images Mr Taylor shows why he’s one of the best in his field tapping into that desire in us all to seesomething fluffy.

From ducklings with puppies, to dogs with kittens and even rabbits Mark captures them all on camera as if they were the best andfriends.

And thankfully so far he’s had no case of any of them eating each other. 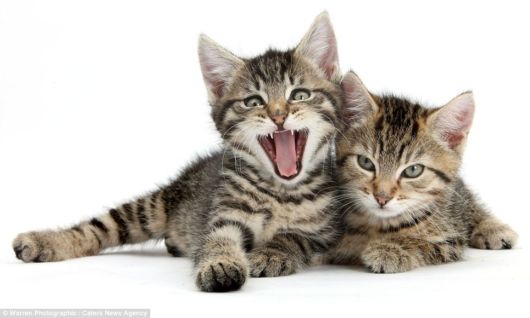 Hear me roar: Kittens Stanley and Fosset have a cuddle 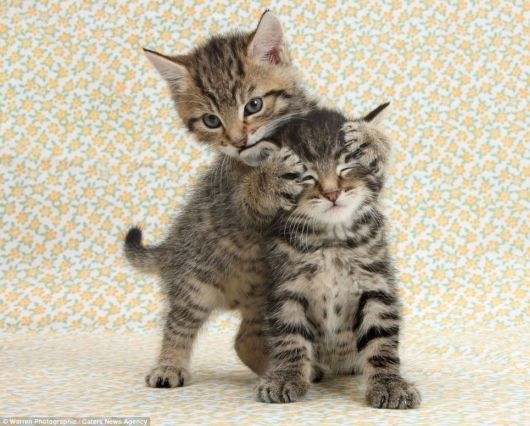 Guess who! Stanley holds his paws over Fosset’s face as they play 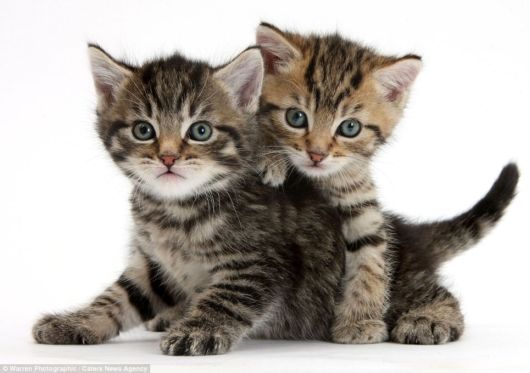 King of the castle: Stanley climbs on top of Fosset 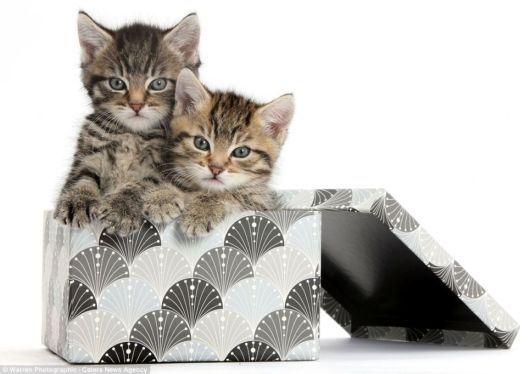 Not just for Christmas: Stanley and Fosset pose inside a gift box 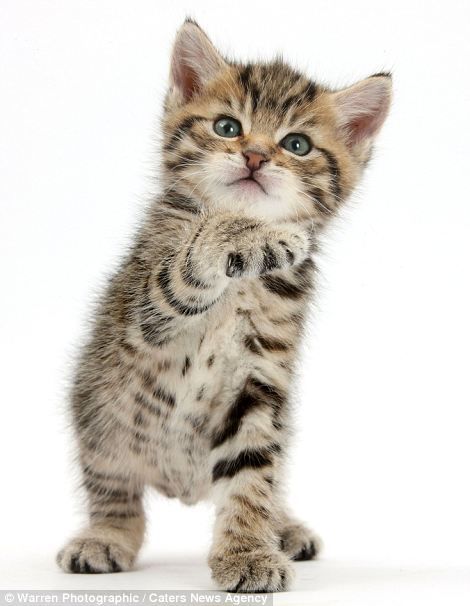 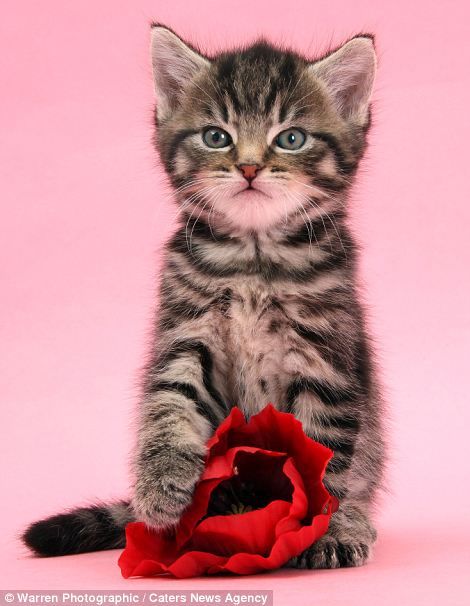 Touch on that: Stanley offers his paw for a fist bump. Right, he poses with a bright red flower

Oh you! Stanley gestures towards the camera as he lies in a hammock

time of the cat nap: stanley and fosset enjoy a snooze 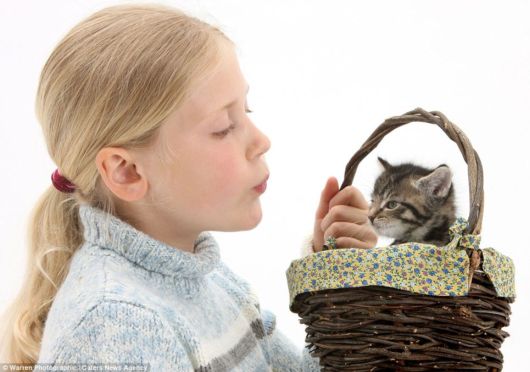 Keeping it in the family: Mr Taylor’s daughter Siena, pictured with Stanley, helps to pose the animals for her father’s photo shoots Mr Taylor, 47, creates his images all at his home studio Warren Photographic, in Guildford, Surrey.

His father Kim is a world-renowned wildlife photographer. His mother Jane, who died in 2007 after a brave battle against cancer, was oneof the first to use a unique style now so well adopted by her son.

Mr Taylor, a father of one, said: ‘There have been a few close shaves when we have put the different animals together, but we often introduce the animals to a rabbit in a cage first to gauge the reaction.

‘If the dog starts licking its lips we know it might not work out well, and for example it’s best not to put a Jack Russell next to a rabbit.

‘I have helpers in the studio and some of the animals extras we have here, for example we have six rabbits, but others we have to bring in.

‘The key to the photograph is making sure the animals are not doing anything they don’t want to do because I think you can tell if they are not enjoying themselves.
‘My mother was a pioneer if you like of this idea of using the clean white backgrounds and I like to think I am carrying on her legacy.’ 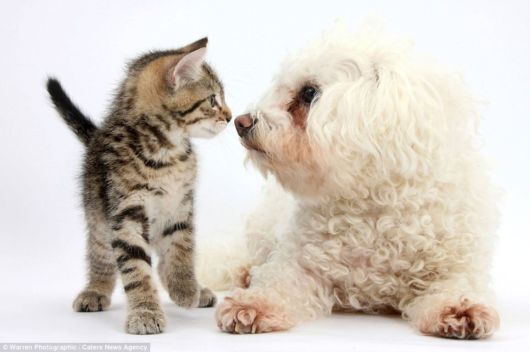 You wanna start something? Stanley goes nose to nose with a Bichon Fris 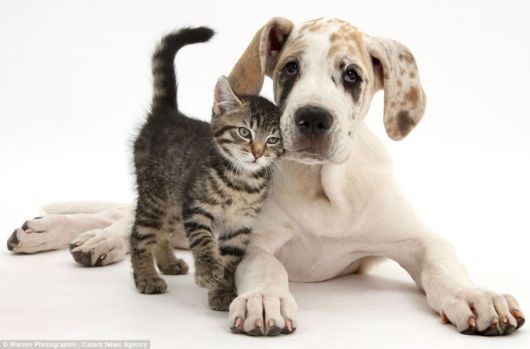 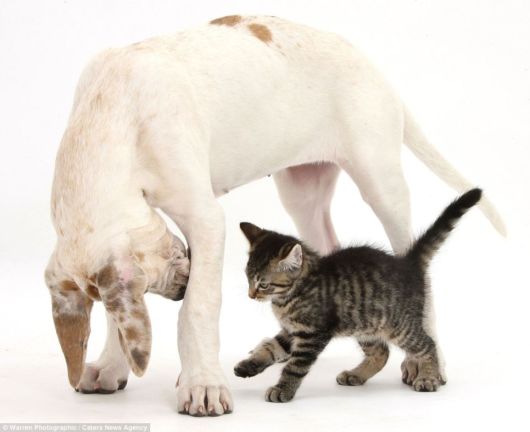 Where u go? Stanley and Tia have a play Keeping it in the family Mr Taylor’s daughter Siena, 10, is also on hand to pose up with the animals in the pictures.

Mr Taylor, who uses a Cannon 1DS Mark III camera, said that he felt his photographs were so popular because they tap into an desire in us all to relate to animals.

He said: ‘I think the fascinating aspect of this type of photography is that it taps into something in us all that sees ourselves and humanemotions in our pets and other animals.’