With the development of new materials and 3D printing techniques it?s not only humans that are benefiting. When an animal sadly loses it?s limbs either through an accident or due to genetic reasons it can be incredibly debilitating and lead to the animal living a troubled life.

Luckily for them there are plenty of amazing people out there that go that extra mile to make sure they have the best life possible. Here are 10 animals who?s lives have been completely changed thanks to prosthetics. 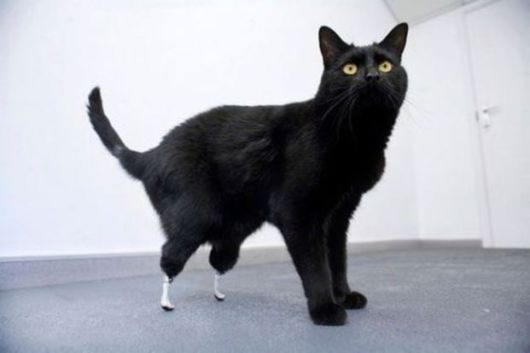 This is two-year-old oscar who got himself some new back legs after he lost his own in an accident with a combine harvester. With the help of the University College London and Veterinarian Noel Fitzpatrick they managed to help Oscar get back to his normal life. 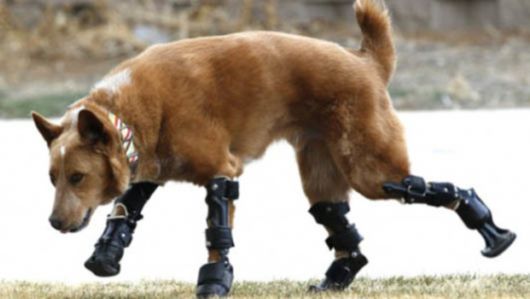 Nakio was abandoned as a puppy during a freezing winter. Found in a basement full of freezing water his tail and four legs could not be saved from frostbite. His new owner, Christie Pace raised enough money to get Nakio a brand new set of back legs from Orthopets. Nakio still had trouble getting around so Orthopets lovingly paid for two front ones as well. Now Nakio is like every other dog. 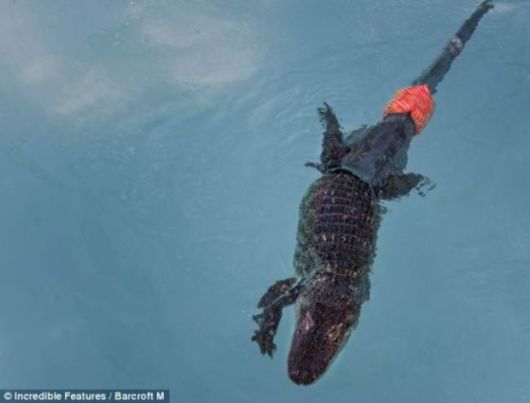 Mr. Stubbs was discovered without a tail, likely due to a fight with another alligator, which meant that he had a lot of difficulty swimming. The Herpetological Society in Phoenix, Arizona changed all that with a new tail made of latex and silicon. They had to teach him at first and he even needed a water wing to help him but now he can swim without it. 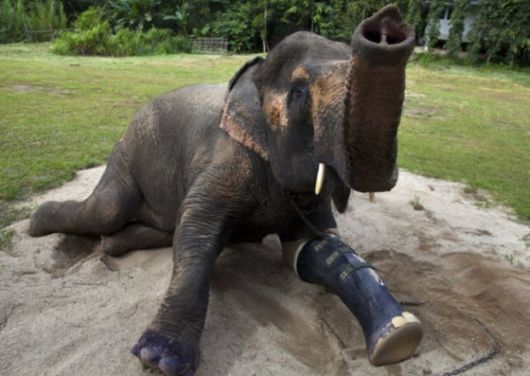 In 1999 whilst she was wandering through a forest Motala stepped on a landmine that was left behind from the Burmese-Thai war. She tragically lost her leg. In 2009 the technology was finally available for the fifty-year-old elephant to become the first in the world to have a permanent prosthetic limb fitted.
5. Molly the Pony 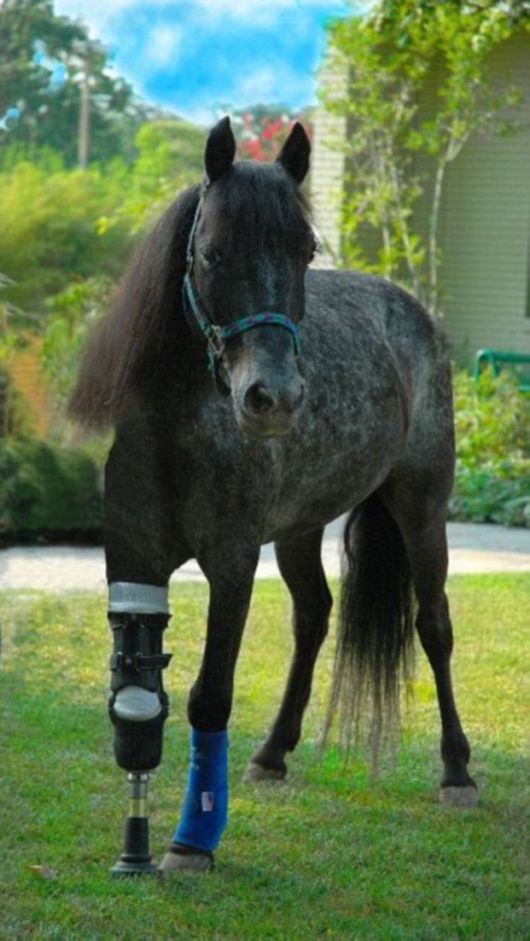 Molly was attacked by a dog and her injuries were so bad that vets thought she wouldn?t survive. Her front leg had become infected so badly that it was thought the only way to stop her suffering was to put her to sleep. Surgeon Rustin Moore believed Molly had it in her to fight the loss of her leg and learn to walk again and that is exactly what she did. With the help of a prosthetic leg she has become a symbol of hope for New Orleans which is where she lives. 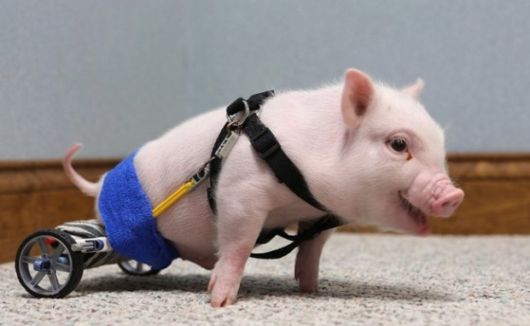 Not only does this adorable pig have the best name in the world, he also has the wheels to match it. Chris P. Bacon gets around with his own set of wheels made from K?nex by his owner Len Lucero. This video of Chris P using his wheelchair made him an internet sensation and now he can be found visiting children?s hospitals to bring happiness and motivation. 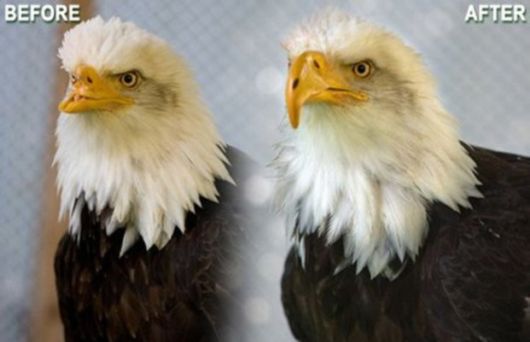 Tragically Beauty was shot by poachers and almost died. The top half of her beak was missing which left her unable to eat and drink by herself. Rescuer Jane Fink Cantwell teamed up with Kinetic Engineering Group to 3D print another beak for her. Thanks to the wonders of technology she is now back to normal. 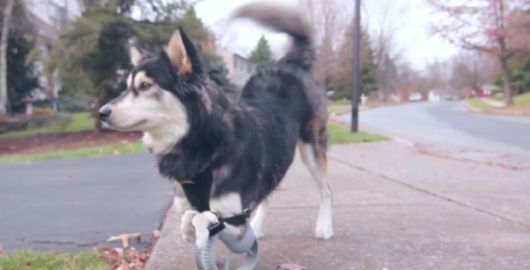 Derby the dog was sadly born without properly functioning front legs. There are wheeled options out there to help disabled dogs move around by themselves but Derby?s owners knew that this loving dog deserved more so they decided to get some special help. The result is a set of custom designed 3D printed prosthetic front legs that allow Derby to run, play and be like every other dog. See more here. 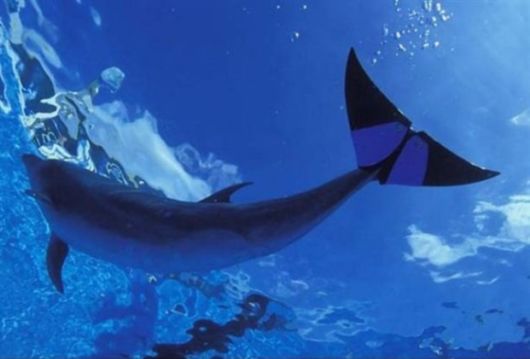 Fuji sadly developed a strange disease that meant a large section of her tail had to be removed. She could still swim after but nowhere near as well as other dolphins. At thirty-four-years-old she still had plenty of life in her so vets enlisted the help of Bridgestone Corp and they made a tail using the same material you find on Formula One tyres. 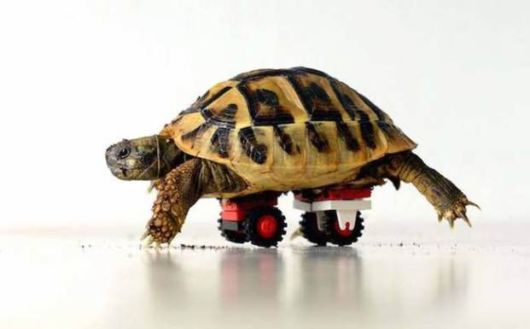 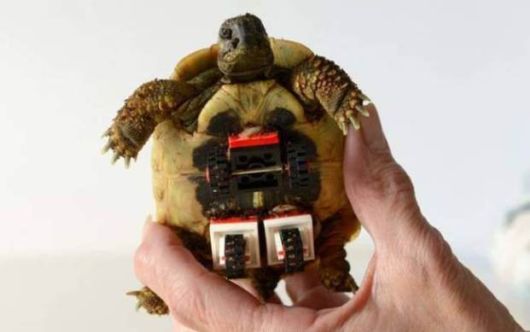 Meet Blade the tortoise, who before now had a lot of trouble getting around. He wasn?t just tortoise slow, he pretty much didn?t even move which is why his owner Iris Peste decided to take Blade to see Dr. Carsten Plischke to find out what was wrong with him. They found out the problem and came up with one of the coolest ways ever to help him move again. They gave him LEGO wheels. Once Blade gets strong enough he can help only move without them.