There are some incredible and unusual animals in the world, but unfortunately many of them are in serious danger of being lost forever. Over 33% of all species are considered vulnerable or endangered, with many falling foul of modern practices hunting, deforestation and pollution, which has led to habitat loss and declining numbers. The chances are that you haven’t ever seen a lot of the animals on this list, and there is a danger that the opportunity to see them may not exist in the future. I am sure you will agree that each one of them would be a sad loss to the world. 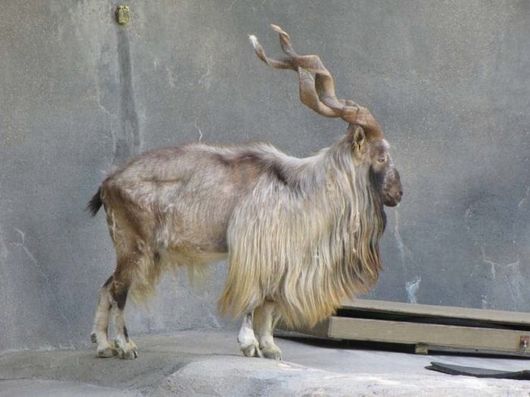 You could be forgiven for thinking that the markhor is an invention from the imagination of C.S. Lewis or J.R.R. Tolkien, but they’re real and they are the national animal of Pakistan. Unfortunately, their lofty status has not saved them from near extinction, as their unique appearance and beautiful, corkscrew horns have made them a prized target for trophy hunters. There are believed to be no more than 2,500 left in existence.
2. The Irrawaddy Dolphin 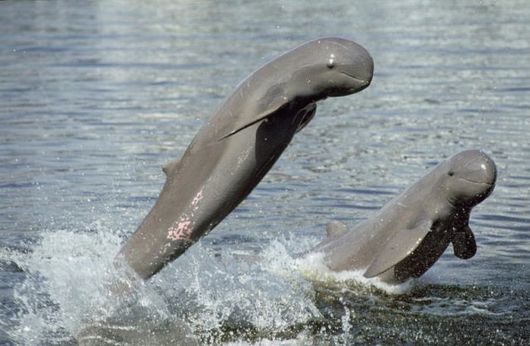 Humans cherish dolphins for their intelligence and playful nature, and the wonderfully named irrawaddy dolphin is one of the unique examples of this much-loved species. Found in the oceans surrounding southern Asia, they sport a unique domed forehead and flat face, which makes them look they are permanently smiling. But these odd creatures are fast disappearing, largely due to overfishing. At one point, less than 100 were believed to be in existence and there are now conservation efforts in motion to try and ensure we don’t lost these wonderful creatures forever. 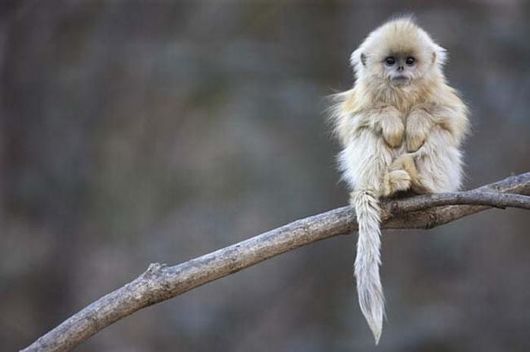 These cute little primates are called langur chatos and are found in the highlands of Asia. They have tiny faces, button noses and short forearms – all features that encouraged famous naturalist David Attenborough to describe them as ‘elves’. However, deforestation has destroyed their habitat and they are now considered ‘critically endangered’.
4. Okapi 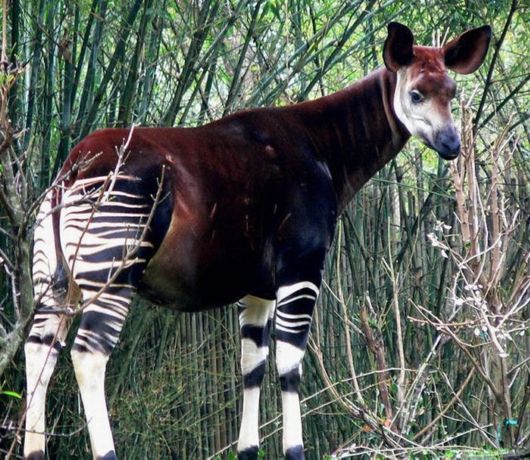 This bizarre animal looks another fantasy world creation, but can be found in the Democratic Republic of Congo. With their striped legs, extended neck and large ears, they are often described as a hybrid of a zebra and a giraffe. Indeed, when British explorers discovered this odd creature back in the 1800s, nobody believed them when they described the creature upon their return home. Threats from logging and hunting have placed Okapis on the endangered list, although efforts to protect them in designated national parks are proving successful thus far.
5. Axolotl 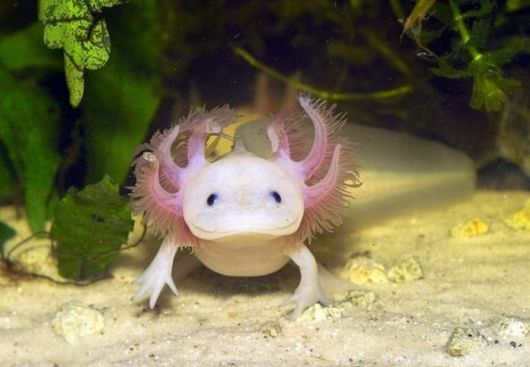 This strangely charming amphibian is also known as the ‘Mexican Salamander’ and makes its home in lakes across Central America, especially Lake Xochimilco in Mexico City. Sadly, by 2010, water pollution and contamination had wiped out nearly all wild Axolotls, and a study in 2013 found no evidence of any surviving examples in their natural habitat.
6. The Coconut Crab 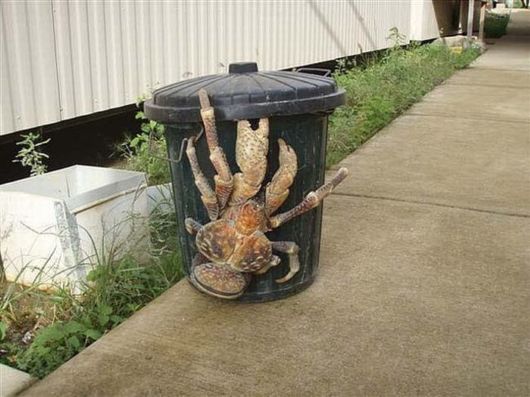 Coconut crabs get their fun name from their tendency to crack coconuts open with their huge claws. Although they look the figment of a terrible nightmare, these humongous arthropods are largely harmless to humans. Human beings, however, are not harmless to them and they are considered a delicacy in some cultures, with efforts now being made to protect their dwindling numbers from the threat of extinction.
7. The Dugong 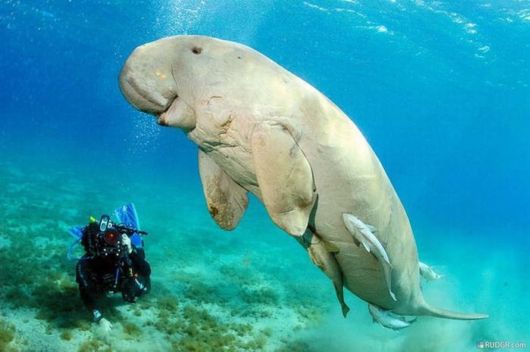 The dugong is the only living representative of the once diverse family of sea creatures known as dugongidae, and its closest relative steller’s sea cow was hunted to extinction in the 18th Century. Often compared to cows due to their lumbering, friendly charm, the dugong is found in Pacific Ocean off the east coast of Africa. They are coveted for their meat and oil, and are now classified as ‘vulnerable’.
8. Tree Kangaroo 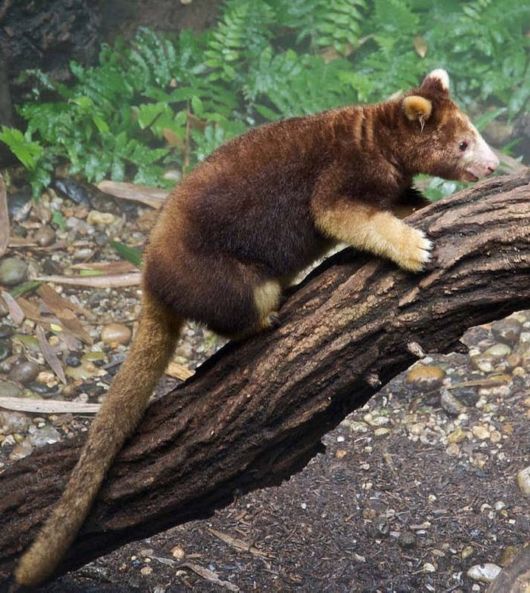 Tree kangaroos are rainforest dwellers found in New Guinea and Queensland, Australia. They are the only marsupials that climb, and they make their homes high in the forest. This has left them vulnerable to the deforestation. Hunting has also had an impact on their numbers, which have decreased significantly over recent decades.
9. Bearded Vulture 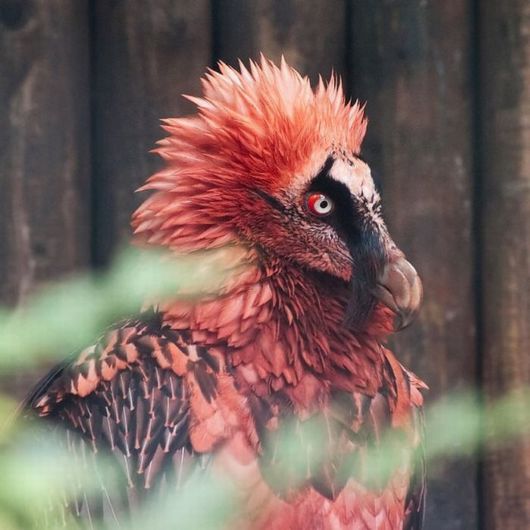 Bearded vultures are indigenous to the Himalayas and other mountainous regions of Europe, Africa and Asia. They were almost eliminated over the course of the last century due to fears over the threat they posed to farm animals and children. Numbers have began to recover, partly thanks to conservation efforts which have seen them reintroduced to areas the Pyrenees in Spain, although no more than 10,000 pairs are believed to exist in the wild and they are still classified as threatened by the World Wildlife Fund.
10. Olm 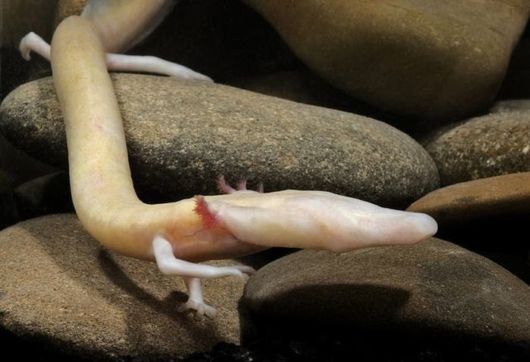 The olm is one of the few amphibians in the world that is completely aquatic. They eat, breed and sleep underwater, inhabiting the caves of central and southeastern Europe and live their whole lives in darkness. Their unique habitat preferences mean that they have never developed eyes, and rely solely on their heightened senses of smell and hearing. This utterly unique creature is now classified as threatened due to water pollution.
11. Quokka 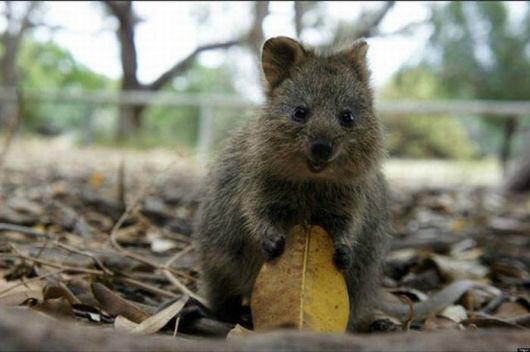 Quokkas are often considered to be the friendliest animals on the planet, and their small upturned mouths give the impression that they are always smiling. These tiny marsupials found only in Australia, have an inquisitive nature and no fear of humans. They tend to approach anyone or anything in an attempt to make a new friend and it is this unassuming personality which has led to declining numbers on the mainland, where they have frequently fallen foul to introduced predators dingos, foxes and even domestic cats and dogs. They are now classified as ‘vulnerable’, although better numbers exist on uninhabited islands.
12. Proboscis Monkey 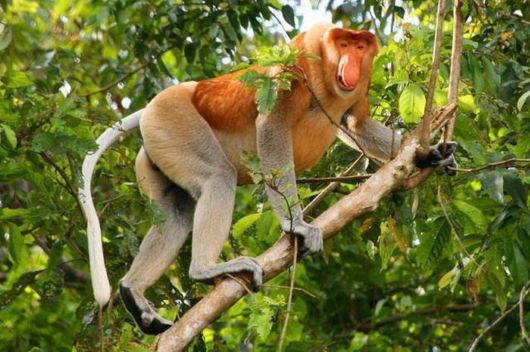 The strange proboscis monkey boasts a huge, hanging nose and is only found on the island of Borneo in southern Asia. As well as the distinctive nose, they have a huge belly, which led to their nickname the ‘dutch monkey’ because local tribes said that Dutch immigrants arriving from Europe in centuries gone by, had the same protruding gut! Deforestation is the all-too-common threat to these bizarre primates, and numbers have decreased by more than 50% in less than half a century.
13. Saiga Antelope 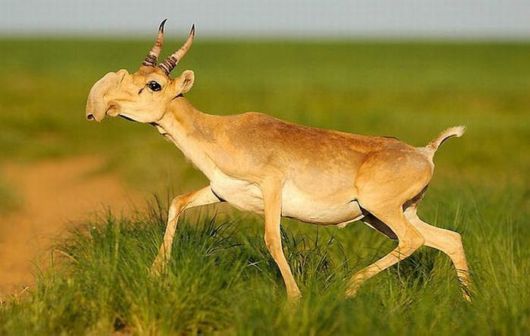 The odd, alien- saiga antelope is found in western China and parts of Mongolia and is another creature with an unmistakeable nose, which flexes and contracts to help filter out the dust of their natural habitat. Unfortunately, the animal is now critically endangered due to hunting and habitat loss, with only a few thousand examples believed to remain in the wild.
14. Kakapo 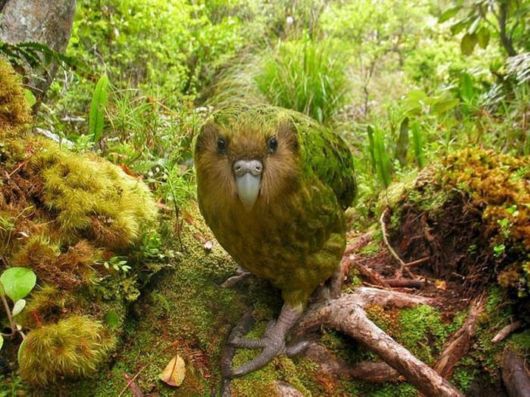 New Zealand’s location has given rise to many odd flightless birds, including the iconic kiwi and the extinct giant moa. Joining these avian oddities is the kakapo, the world’s only flightless parrot. When people began to arrive in the region, they brought animals with them, and cats, dogs and foxes found an easy target in these strangely rotund, lumbering birds, which has driven them to near extinction. They are no longer found at all on the mainland, with fewer than 130 believed to exist on outlying, uninhabited islands.
15. Gooty Spider 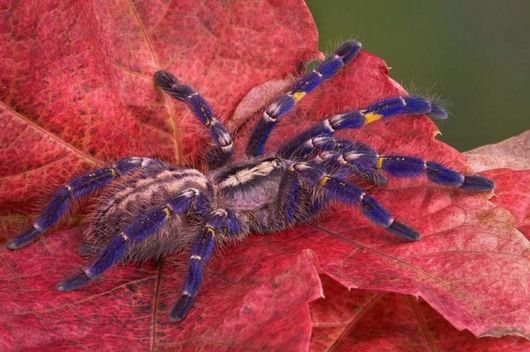 The gooty spider is found only in selected forests of India and indeed their natural habitat covers only 60 square miles. Their beautiful color has made them a favorite target for the pet trade, leading to a decrease in the number of mating pairs in the wild, a problem exacerbated by logging and deforestation. These unique arachnids are now on the critically endangered list.
16. Gharial 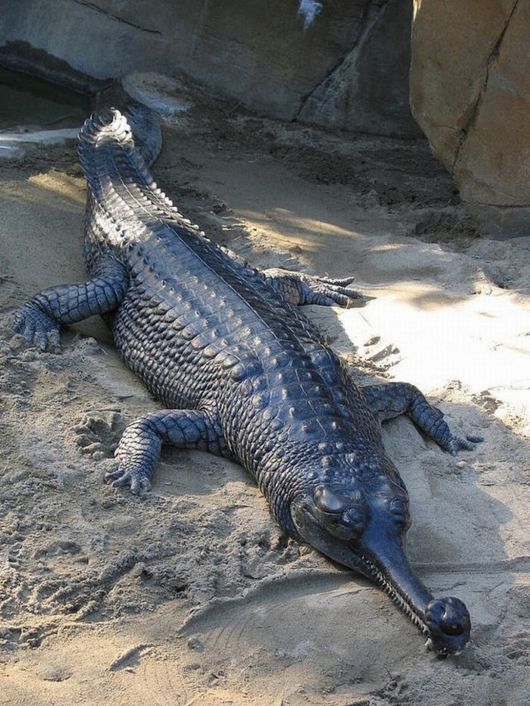 The utterly bizarre gharial crocodile is found in the Indian subcontinent where is uses its long, narrow, water resistant snout to hunt fish. Their jaws are too delicate to pose a threat to larger animals, including humans, but overfishing and water pollution have impacted their living population, which dropped from 10,000 in 1946, to fewer than 235 in 2006, a decline of 95% over just three generations.
17. Horton Plains Slender Loris 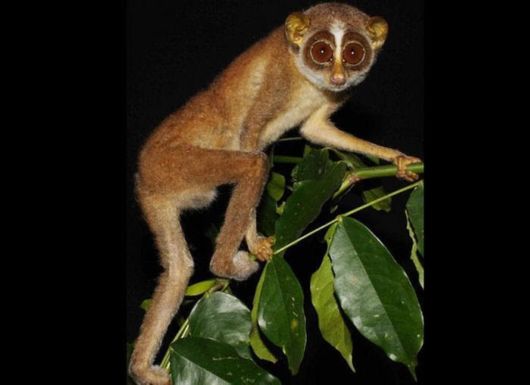 These small primates are found only in the highlands of Sri Lanka (they are named after the Horton Plains National Park in the same country) and are known for their shy nature and huge eyes, which gives them excellent night vision – a pretty useful tool for a nocturnal creature. Some cultures believe that their flesh can cure leprosy, while other body parts can protect people from witchcraft, which has had an effect on its numbers as has loss of habitat. These beautiful animals were not seen at all between 1939 and 2002 and sightings continue to be eractic. Sadly, they remain close to extinction.
18. The Hooded Seal 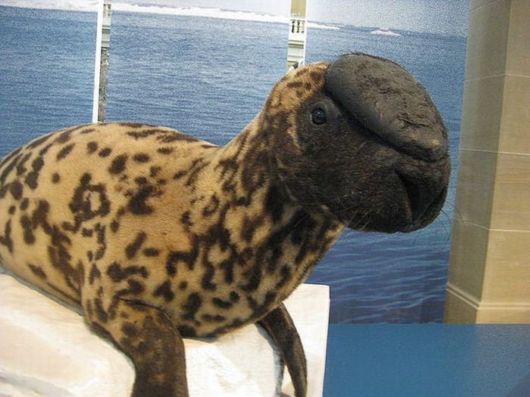 Hooded seals display a beautiful printed coat and unique nasal cavity, which sits on top of their head, deflating and inflating as they swim. The cavity is also used to attract mates, with particularly impressive displays considered to be signs of good health and vitality. They are one of the biggest species of seals and grow up to 8 feet long. They are also greatly coveted by hunters – leading to declining numbers in the wild and they are now considered vulnerable to extinction.