Giant Mutant Cows of Belgium
This enormous Belgian cow got its huge size and muscle mass from
natural mutation of the gene or sometimes called double muscling,
which results in accelerated lean muscle growth. 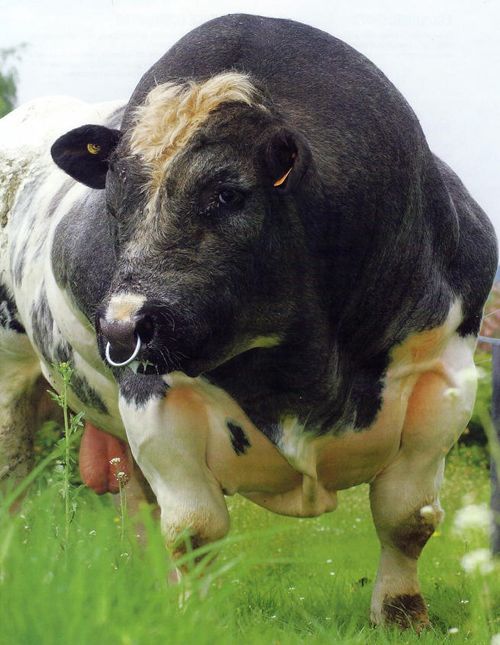 Worlds Biggest Dog
Hercules, an English Mastiff is currently known as the biggest dog in the
Guinness Book of World Records, weighing in at 294 lbs (133 kg). 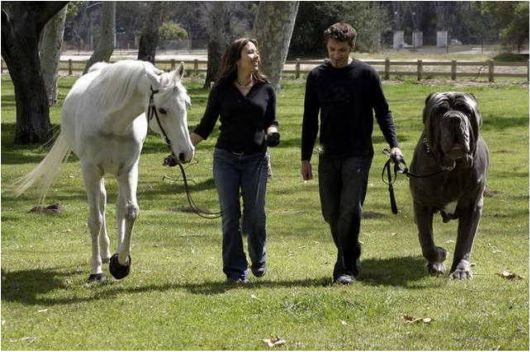 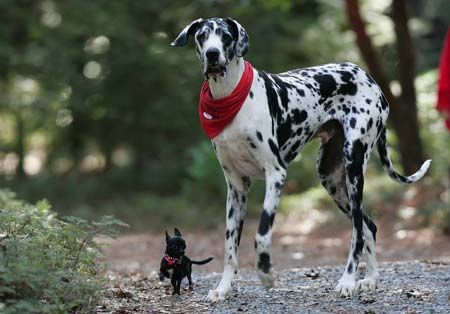 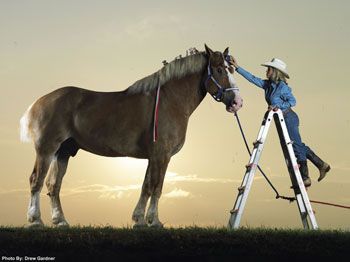 World Longest Goldfish
The worlds longest goldfish (Carassius auratus) is owned by Joris
Gijsbers in Hapert, The Netherlands. The fish is measured 18.7 in (47.4 cm) from snout to tail-fin end. 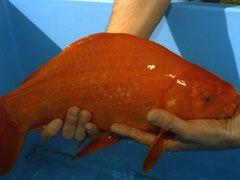 Biggest Freshwater Fish Ever Caught
The official world record for the biggest freshwater fish ever caught is the
Giant Mekong catfish. This huge catfish was caught in Thailand in May
2005 and is measures in at 9 feet (2.7 m) long, weighed 646 lbs (293 kg),
and is 5 times bigger than the ?world record? catfish caught in North
America. 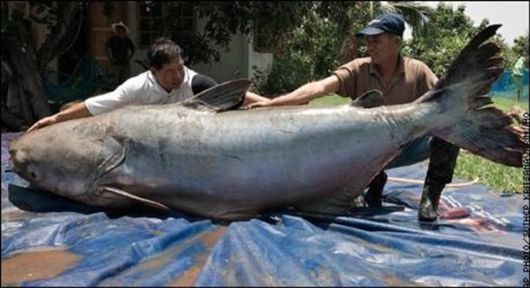 Worlds Largest Rabbit
Try pulling a rabbit as large as this out of a hat. This gigantic rabbit
weighs 17 lbs (7.7 kg), has ears measuring at 8.2 in (21 cm), and is
almost 3.2 feet (1 m) tall. Herman could easily be the worlds biggest
rabbit, but Guinness World Records have stopped accepting entries
because of fears people were over-feeding their pets. 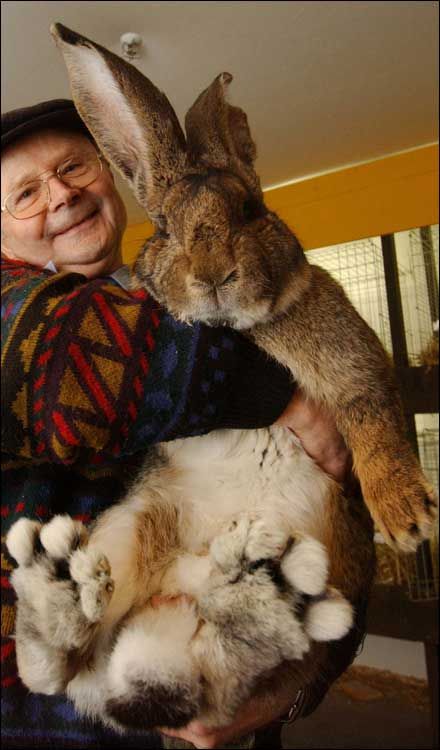 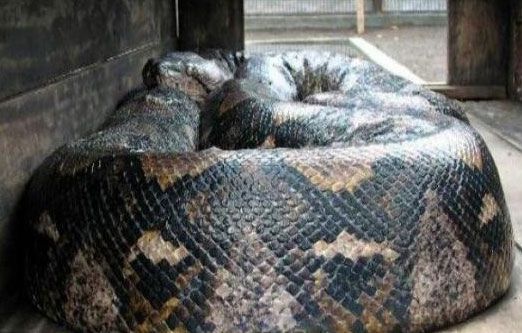 Largest Wildcat in the World
The largest wild cat in the world is a liger, also known as a hybrid cross
between a male lion and a female tiger. Similar to the English Mastiff, this
huge liger is also named Hercules and is recognized by the Guiness Book
of World Records as the largest cat on Earth, weighing in at 900 lbs (408
kg). 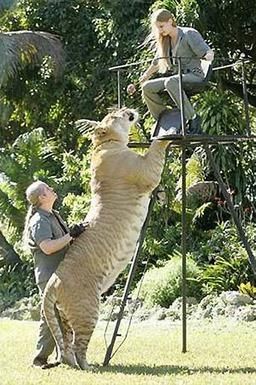 Biggest Housecat in the World
Believe it or not this image was not a result of photoshopped. 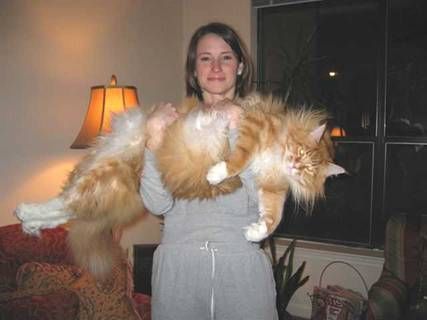 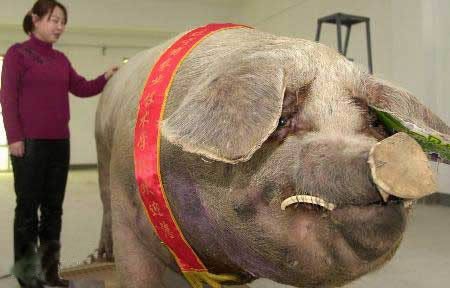 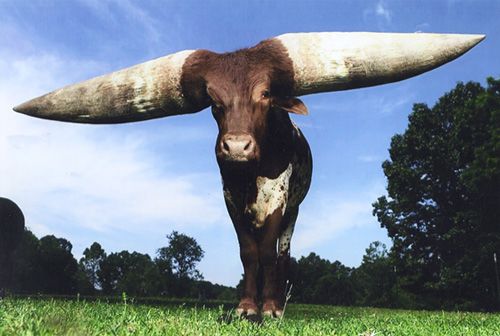 Biggest Lobster Ever Caught
A group of scientists has found what may be the worlds largest lobster
ever captured. Current measurement is 19 inches (50 cm) long. 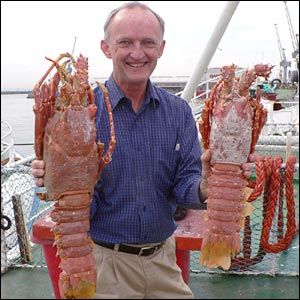 Largest Crab
According to wikipedia, the coconut crab, Birgus latro, is the largest
land-living arthropod in the world. The coconut crab has body length of
up to 16 in (40 cm), weight 9 lbs (4.1 kg), and a leg span of more than 3
ft (91 cm), with males generally being larger than females. 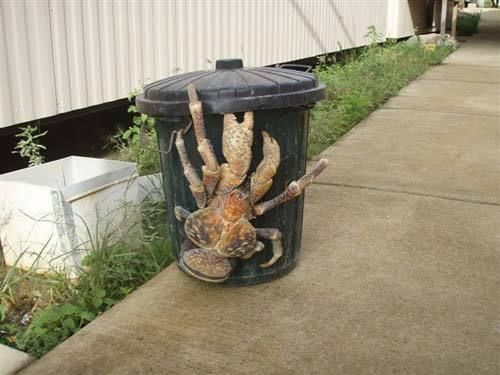 Here is a collection of the worlds biggest animals, from dogs to horses to cows, enjoy! 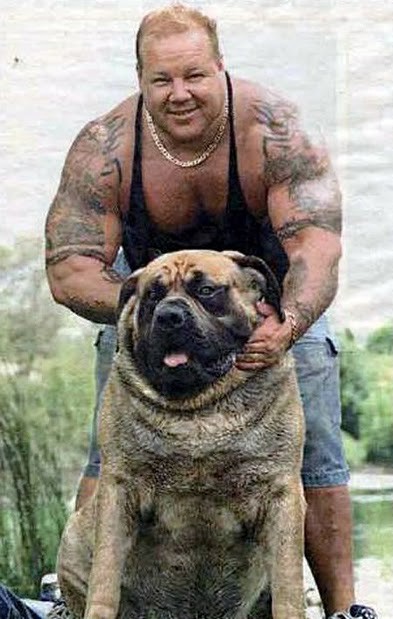 Say hello to this gargantuan specimen named Hercules, purportedly the Guinness Record holder for World’s Biggest Dog. Hercules is an English Mastiff and has a 38 inch neck and weighs 282 pounds.

With "paws the size of softballs", the three-year-old monster is far larger and heavier than his breed’s standard 200lb. limit. Hercules owner Mr. Flynn says that Hercules weight is natural and not induced by a bizarre diet: "I fed him normal food and he just grew, and grew, and grew?.

Radar, a Belgian draught horse, is the World?s Tallest Living Horse. This huge horse, at 6ft 71/2in from hoof to shoulder, is from Mount Pleasant, Texas. At 2,400lb, he has a giant appetite to match, putting away 20 gallons of water a day and 18lb of grain. 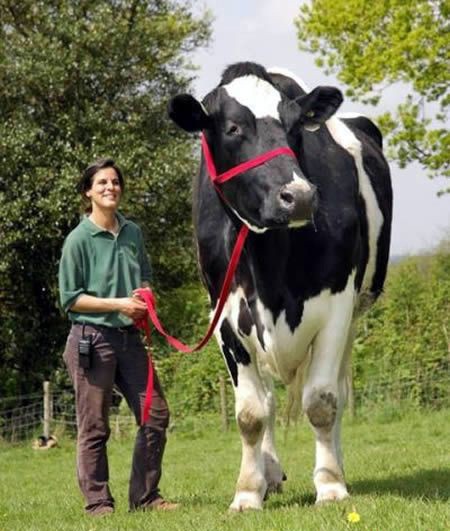 As big as a small elephant, Big Cow Chilli and he’s described as a gentle giant. Chilli the giant bullock stands at 6ft 6ins and weighs well over a ton. Despite his grand stature, Chilli only grazes on grass during the day and enjoys the occasional swede as a treat. 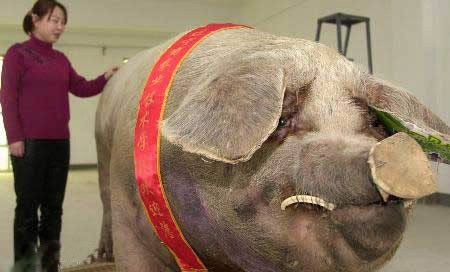 The Liaoning Provincial Agricultural Museum is appealing to the Guinness Book of Records to recognise a 900 kg (1984 pounds) pig which died on February 5 as the biggest pig ever. When the pig died it was 2.5 metres long, had a waistline of 2.23 metres and a tusk of 14.4 centimetres long. According to XU Changjin, a farmer of Wafangdian city, the pig was only 5 years old. He kept his pig in a good built sty and gave it quality food all its life. 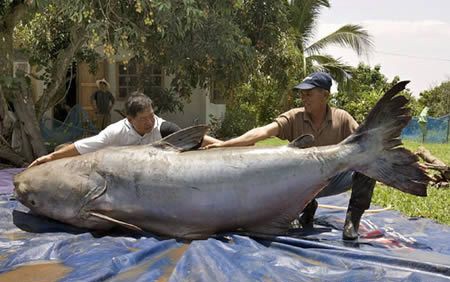 At 646LB this Mekong Giant Catfish is the largest freshwater fish in the world. With nearly nine feet long (2.7 meters) and as big as a grizzly bear, this huge catfish caught in northern Thailand may be the largest freshwater fish ever recorded. Although there are many claims and rumours about the world?s largest freshwater specimens, especially from misguided anglers. However, in the eyes of scientist’s the Mekong Giant Catfish has taken pole position with the recorded capture of this huge 646LB specimen by local fishermen in 2005. Many anglers over look the fact that some larger fish that can be caught in the worlds rivers, such as Sturgeon, migrate between river and sea, and therefore not considered to be freshwater species in the true sense of the word.

Hercules might be the biggest dog in the world, but the tallest according to the Guinness World Records is Gibson, a Harlequin Great Dane, who is 42.2 inches. The 170-pound Dane is more than 7 feet tall, taller than most NBA basketball players.

Jungle Island in Miami is home to a liger (a hybrid cross between a male lion and a female tiger) named Hercules, the largest non-obese liger. The liger is recognized by the Guiness Book of World Records as the largest cat on Earth, weighing in at 900 lbs. 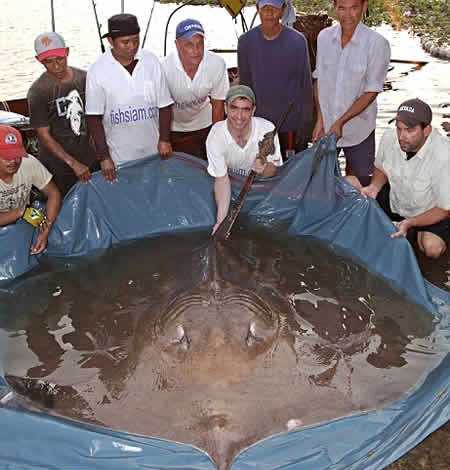 It took 90 minutes to land, 13 men to heave it out of the water… and weighed 55 stone when they finally got it to the scales. So it’s little wonder that when Ian Welch first hooked the record stingray, it almost pulled him into the river. The angler, from Aldershot, Hampshire, was fishing in Thailand when he landed the ray, which is the biggest freshwater fish to be caught with a rod, with over 7ft long and wide, with a tail of 10ft. 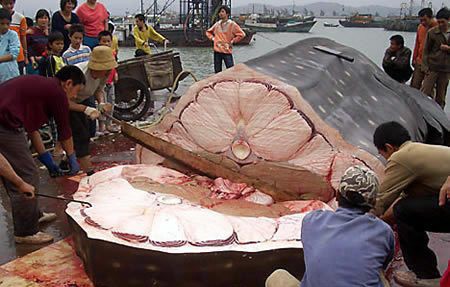 More likely to eat than be eaten, this giant whale shark was caught off the coast of China by hardcore fishermen who managed to harness the ten-metre, eight-tonne whopper. Whale sharks are the world’s largest living fish, it is estimated that they can reach an 18 metre length. They live in warm water along the coast and open seas and spend most of their time near the surface.