Two women were given the nature close-up of their lives when a wild bull elephant approached their veranda as they sat out in the sun.And quick-thinking photographer Marsel van Oosten made the most of the rare situation by capturing a holiday snap to remember.He was staying at the Lower Zambezi National Park in Zambia with his wife, Daniella Sibbing, when the African elephant came to introduce himself.As Daniella and lodge owner Lana De Villiers sit motionless, for fear of being trampled, the 43-year-old aimed his camera and took the breath-taking shot of the beast. 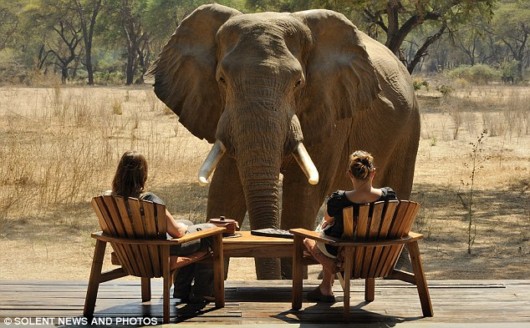 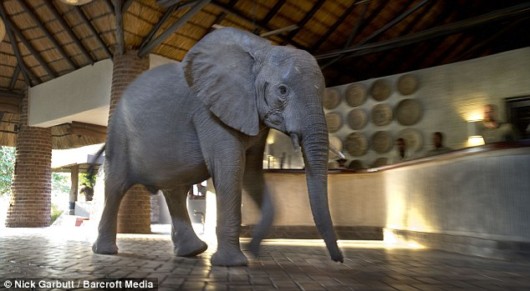 Big reception: The herd come marching though the Elephant Hotel reception – as they do every year, on the hunt for food 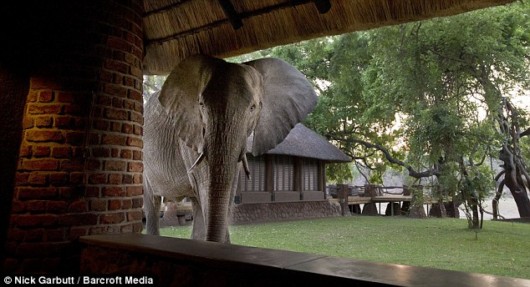 Welcome: An African elephant wanders through the Elephant Hotel in Zambia, as a herd do every October, as it’s a traditional route.He added: ‘I was reorganising my camera bag and cleaning my gear because it can be very dusty at times.’When I saw the elephants approaching, I initially didn’t see much of a photo opportunity as the light was getting quite harsh.’But when this one elephant started to get closer and closer I quickly took my camera and positioned myself behind the women, hoping for the elephant to walk into the frame.’When it was only a metre away, it looked up to check out the situation and that was when I took this shot.