Thomas Kokta travelled from his home in Washington state to capture the polar bear family in Manitoba, Canada
Less than 500 people are thought to have seen tiny cubs emerging from their den for the first time
Mr Kokta captured rare sight, photographing polar bear triplets in the wild
Females often give birth to more than one cub but twins are far more common than triplets

It is sight rarely enjoyed… tiny polar bear cubs emerging from their den for the first to play in the snow.
But wildlife photographer Thomas Kokta was in the right place at the right time, on hand to capture the rare moment, as three young cubs ventured out into the snow-covered plains of Canada, their mother in tow.
It is thought less than 500 people have been lucky enough to witness baby polar bears as they emerge from their dens in the wild. 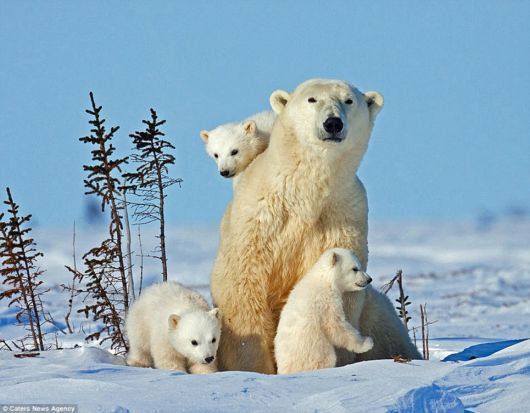 Wildlife photographer Thomas Kokta travelled from his home in Washington state to Manitoba, Canada to capture these stunning images of a polar bear and her three cubs 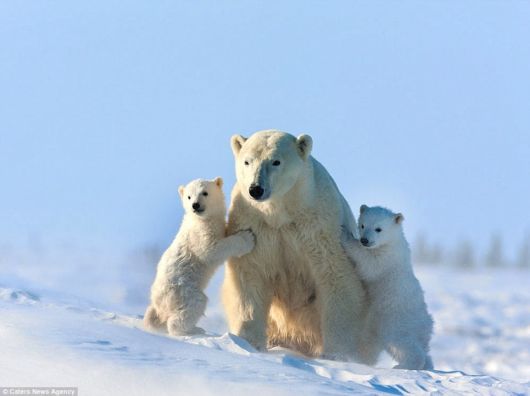 Waiting on the snowy plains, where temperatures range from -15C to -50C, Mr Kokta was delighted when he spotted the rare sight of a mother emerging from her den, her tiny new cubs in tow 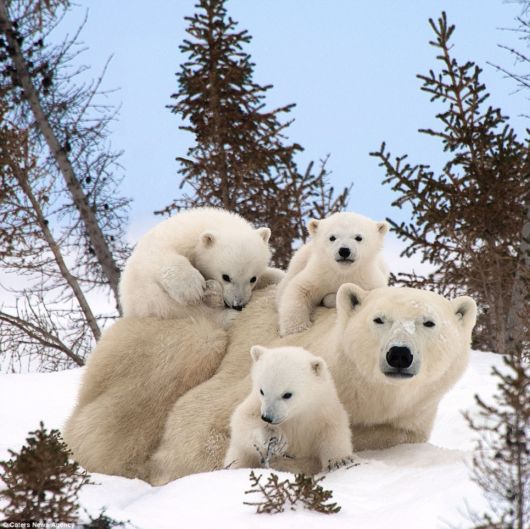 He is believed to be one of around 500 people who have seen polar bear cubs venturing out of their homes for the first time, first hand Mr Kokta, who hails from Issaquah in Washington state, has been taking photos of polar bear families for the last few years, carefully learning their first moves.
And his latest shoot in Manitoba, Canada proved a first for the experienced photographer, as he captured the extremely rare phenomenon of a mother bear who had given birth to surviving triplets.

While polar bears in the wild frequently give birth to more than one cub, triplets are rare.
With three young cubs battling for their mother’s milk, it is common for the stronger youngsters to push the runt aside, leaving the smallest to starve to death in the early months.
But Mr Kokta said the family he spotted appeared playful and healthy, as they posed for a family portrait-style shot with two of the cubs clambering on to their mother’s back. 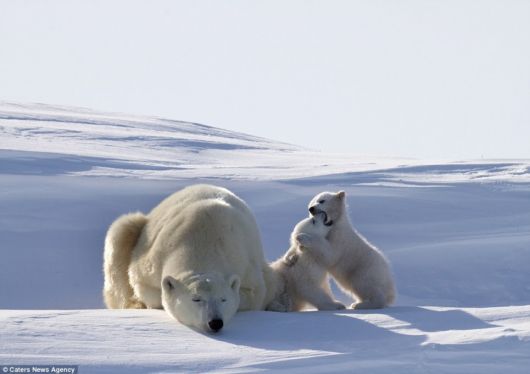 And despite his vast experience, Mr Kokta’s latest shoot proved a surprising first for the photographer, as he witnessed surviving triplets in the wild for the first time 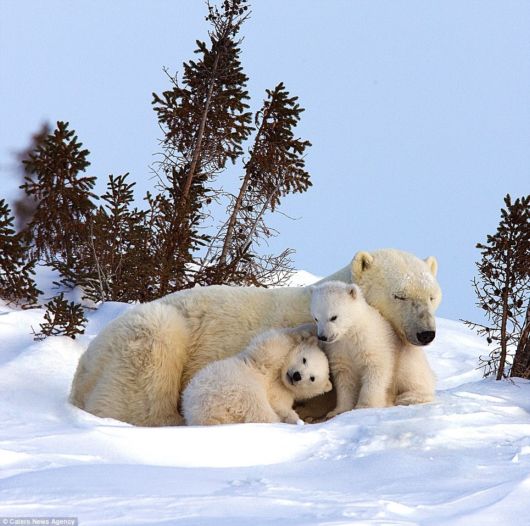 While it is common for females to give birth to twin cubs in the wild, it is rare for triplets to survive. Competing for their mother’s milk it is often the case that the stronger two cubs push the runt aside, leaving the smallest left to starve 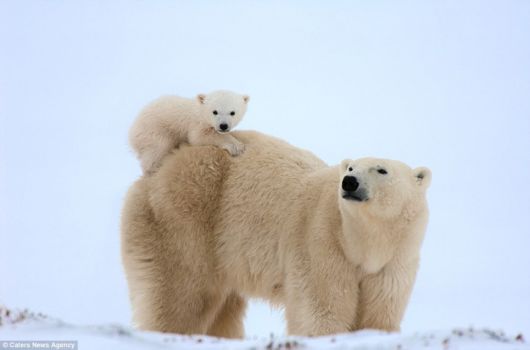 But as Mr Kokta’s images reveal, this family of polar bears appeared healthy and playful as the young cubs clambered over their mother and play fought with one another While admitting he loves shooting the animal, capturing shots of polar bears comes with its challenges, not least the icy temperatures, plummeting to between -15C and -50C.
And he added much of his travel tracking the bears has to be undertaken on foot, it being almost impossible for vehicles to get close without disturbing the animals.
And in his quest to capture images of baby polar bears, Mr Kokta said he routinely faces the hurdle of their sleep patterns, with youngsters needing to sleep for long periods of time leaving him waiting around in the cold, putting himself at risk of frostbite.
He said: ‘I now have thousands of pictures of polar bears as I have spent more than six months photographing them.
‘I’ve been fortunate enough to see triplets, babies climb trees and I have many, many pictures of the cubs pulling goofy poses.
‘People always seem to think the baby pictures are cute, but it is hard to relate to how much effort goes into shooting these shots – it’s cold, remote and there is a lot of waiting around.’ 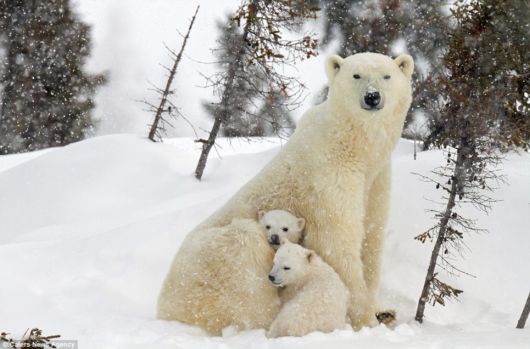 Mr Kokta said: ‘People always seem to think the baby pictures are cute, but it is hard to relate to how much effort goes into shooting these shots – it’s cold, remote and there is a lot of waiting around’ 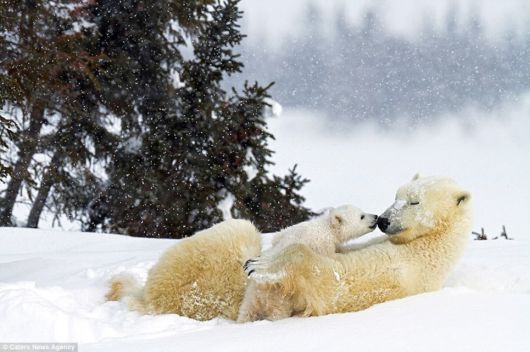 Capturing shots like this of a young cub seemingly planting a kiss on its mother’s nose can be particularly challenging as photographers battle icy temperatures and are forced to travel on foot, as vehicles tend to scare the animals away