The little lions in winter: Pair of rare snow-white cubs spring a surprise on keepers at wild life park

These snow-white lions in winter were born in a Caesarian procedure at a German wild animal park after the pregnancy of their mother went unnoticed.

Twins Niza and Nero are off the critical list after 15 days in intensive care following their birth at the Serengeti Park near Hanover. 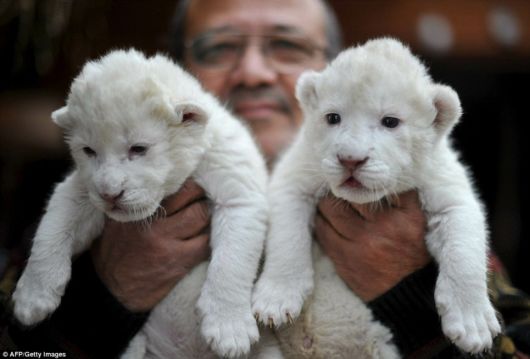 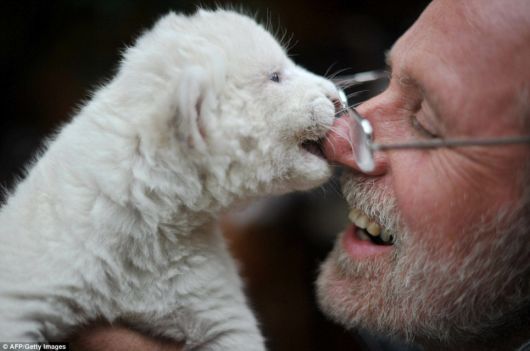 Nero takes a bites in the nose of veterinarian Michael Booer. They were near death after they were born, but were nursed back to health over the last two weeks

Park veterinary surgeon Dr Michael Boeer said; ‘We thought that she had only been playing with the lion. We never cottoned on to the fact that she had actually mated.’

On November 30 a white lion baby was found lying beside Brouks on her straw. It died 48 hours later.

‘Brouks lay apathetically in the corner. I suspected that she might still have babies inside her,’ added Dr Boeers.

The big cat was carefully sedated and sent with a police blue flashing-light escort to the Veterinary University in Hanover. ‘We had no time to lose,´’ said Dr Boeers. 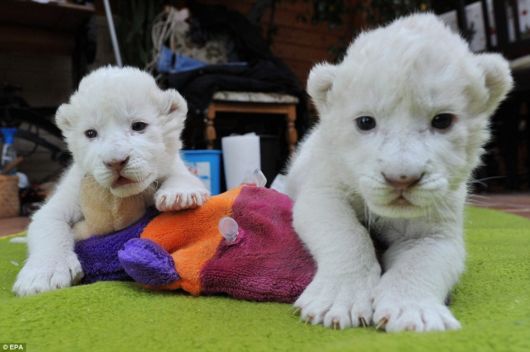 They will be cared for by humans for about four months. Their mum Brouks was ‘out of it’ at their birth and doesn’t’ realize she is a mother 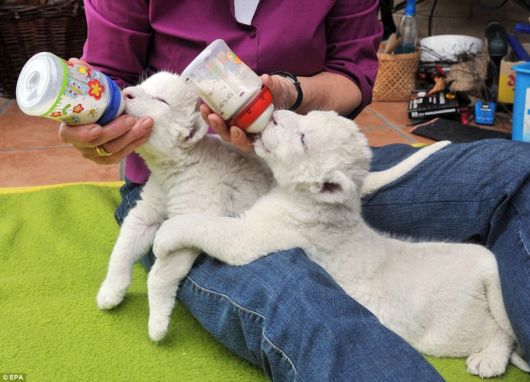 They are fed a special formula 10 times a day

There professor Ingo Nolte led a six-man team to successfully bring the lion cubs into the world. They were delivered after a seven-hour operation.

Dr Boeers went on; ‘They were nearly dead. But we nursed them carefully and they made it.’

Professor Nolte said; ‘A lion looks like a cat but its womb has a completely different form. The skin is so thick that we could cut it only with difficulty using a normal scalpel.’

Regina Hamza, 52, has become the nanny to the lion babies. Ten times a day she bottle feeds them a special milk formula to get their strength up.

As for mother Brouks, she was ‘so out of it’ according to Nolte, she doesn`t even know she is a mother.

Over the coming days and weeks, the cubs will be introduced to her and it is hoped she will accept them. 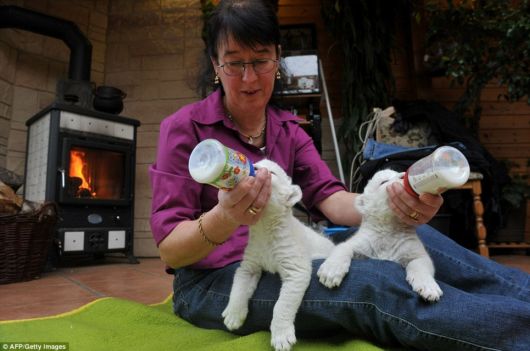 Here they are bottle-fed by Regina Hamza. They will continue to be bottle fed until they can be acclimatized to the lions’ family 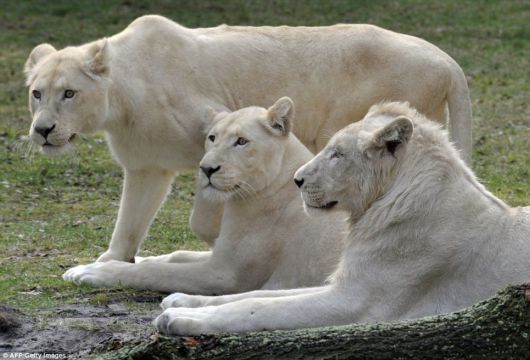