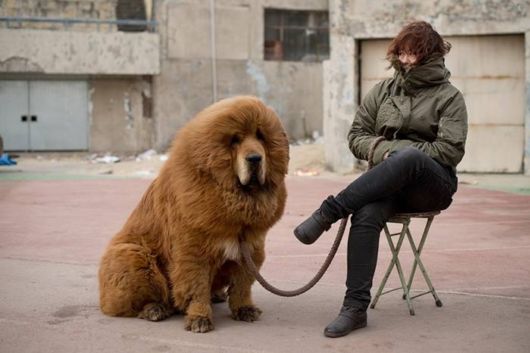 BAODING, China ? Drooping eyes barely visible behind a mountain of glossy black fur, an enormous dog snoozes on stage in an industrial Chinese city. Its asking price: close to a million US dollars. "This is the greatest dog in China," breeder Yao Yi said, as he stroked a year-old Tibetan Mastiff, up for sale on Saturday for five million Chinese yuan ($800,000), at a dog show in Baoding, a few hours drive from Beijing. Massive and sometimes ferocious, with round manes lending them a passing resemblance to lions, Tibetan Mastiffs have become a prized status-symbol among China’s wealthy, with rich buyers across the country sending prices skyrocketing. One red Mastiff named "Big Splash", reportedly sold for 10 million yuan ($1.5 million) in 2011, in the most expensive dog-sale then recorded. "Check out her paws, they’re enormous," Yao said, as his dog salivated onto a wooden stage in a dilapidated sports stadium where breeders gathered from across northern China to show off their purebred canines. 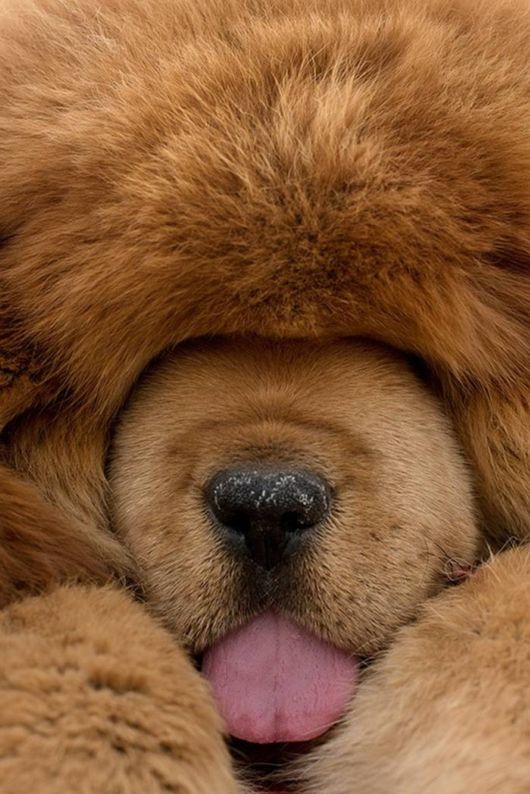 "Her parents are from Tibet, so she’s not used to hot weather," Yao added.

Owners say the mastiffs, descendents of dogs used for hunting by nomadic tribes in central Asia and Tibet, are fiercely loyal and protective.

"It takes over a month to drive back from Tibetan areas with the dogs," said Wang Fei, a Beijing-based mastiff breeder who collects white-coloured puppies from Western China in the back of a truck.
Most of the puppies are unable to adjust to low altitudes and die during the journey, he added. "The success rate is not very high."

The risks of travel lead other breeders to raise dogs closer to their clients in China’s wealthy eastern provinces.

"I take dogs to Tibet for breeding, but they give birth near Beijing," said Zhang Ming, who joined vendors at the mastiff-dedicated expo, where dozens of dogs paced around in white cages or peeked out from the back of cars. 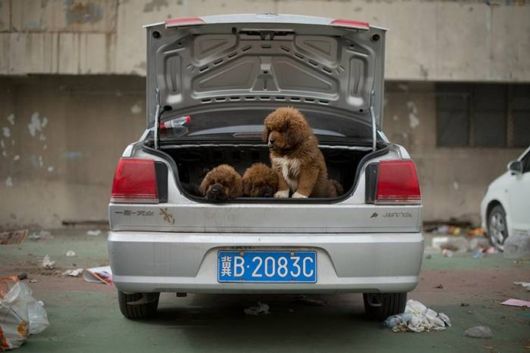 Zhang’s wealthiest clients include the owners of coal-mines which dot the landscape of northern China, he said.

"Now almost everyone has a car, so people need a new way of showing their wealth," he said, adding that not all of his clients pay in cash.

"One buyer paid for a dog with a 30,000 yuan Omega watch and a car, just for a small dog," he said, whipping out his smartphone to show a record of the transaction.

The sperm of pure-bred mastiffs can also be worth a fortune. "I would charge 50,000 yuan to sell his sperm," Zhang said of his favourite dog, named "Moonlight Fairytale", on sale for 200,000 yuan and weighing 155 kilogrammes (340 pounds).

The booming market has attracted a fair share of fraudsters, with some passing off crossbred dogs for pedigrees, using artificial hair extensions made with dog fur, the China Daily reported.

Intensive breeding has led to dangerous numbers of inbred mastiffs, while some vendors inject glucose into dog’s legs to make them appear stronger, the Global Times daily reported. 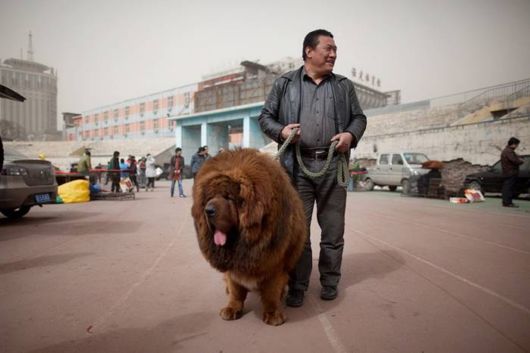 Out of control Tibetan mastiffs have also carried out attacks across China, with one dog wounding nine people in a frenzied attack in Beijing in 2012, said the Global Times.

Local newspapers reported in December that a 62-year-old man in central China’s Henan province died after being attacked by a Tibetan Mastiff owned by a local government official.

Regulations in Beijing and other major Chinese cities ban residents from keeping large dogs in downtown areas, but rules are sometimes flouted.

"It’s like the one child policy," Zhang said, referring to rules limiting the number of children families can have, which can be circumvented by paying fines to authorities. "If you really need to break the rules, you can do."
Vendors at the dog show haggled with locals over prices for cheaper crossbred mastiffs, but Zhang sets his sights on the higher-end of the market.

"There are a lot of people buying dogs worth around million yuan," he said. 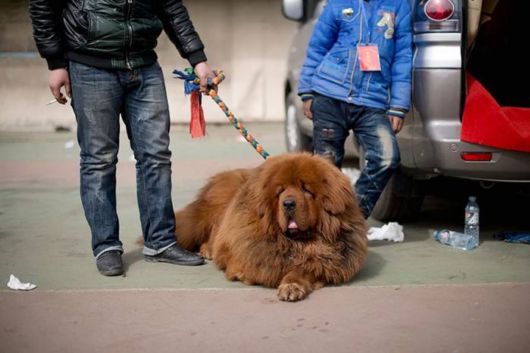 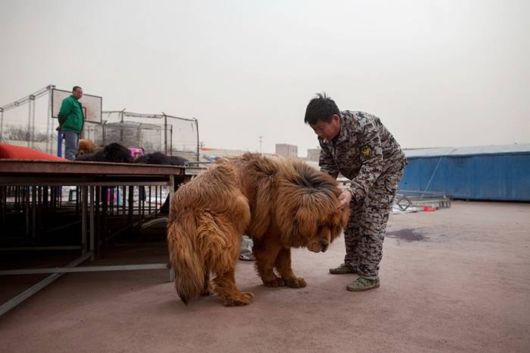 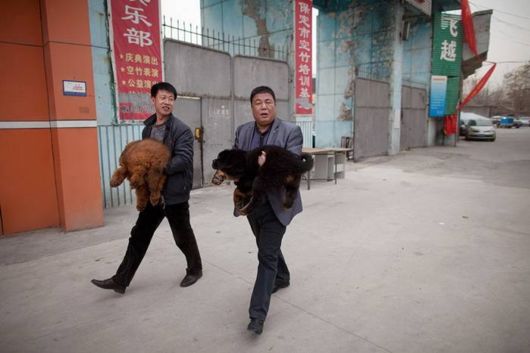 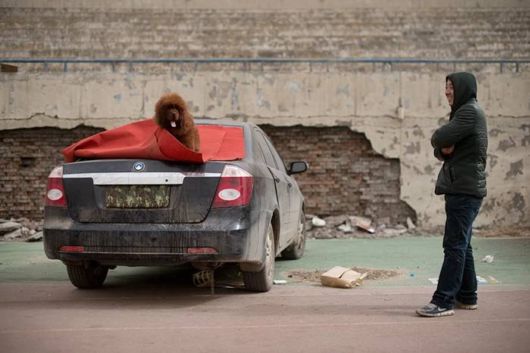 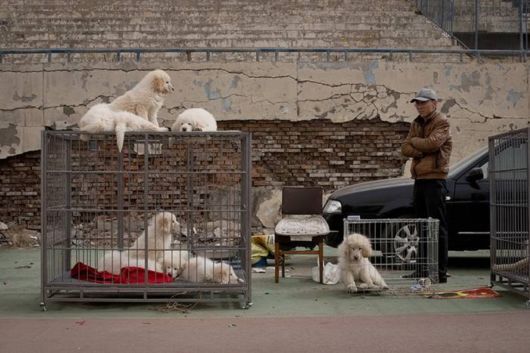 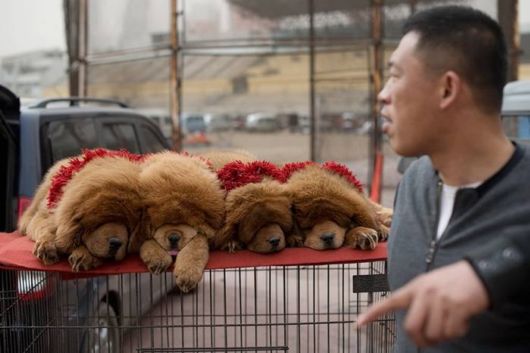 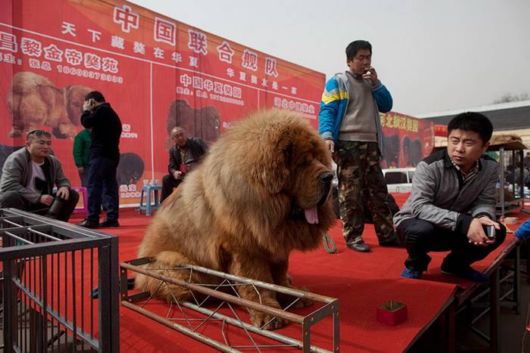 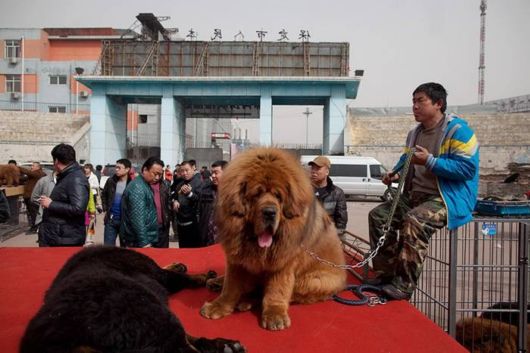 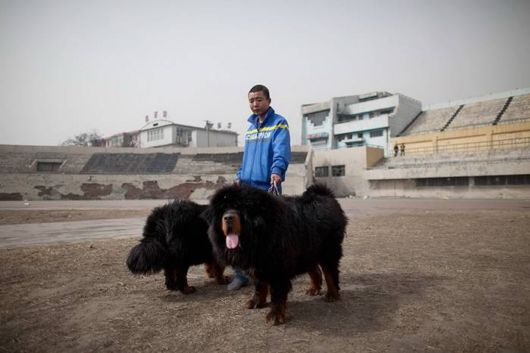