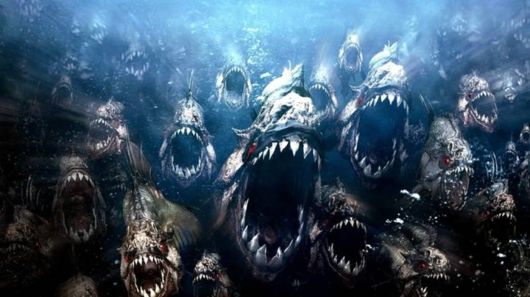 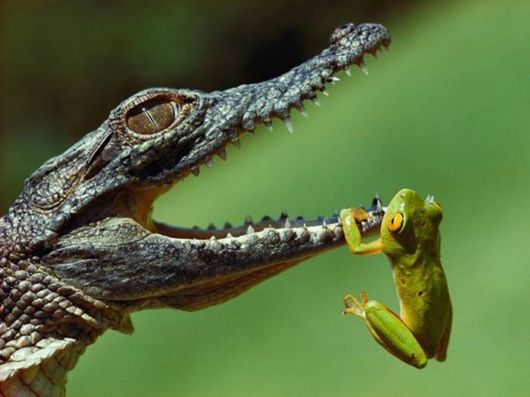 Photograph by Jonathan Blair, National Geographic
A year-old Nile crocodile attempts to snap up a frog in the St. Lucia Estuary in South Africa (from the National Geographic book Visions of Earth). Also known as the common crocodile, these large reptiles are distributed across much of Africa, and they have earned their reputation as among the most ferocious, deadly animals on the planet.

Male crocs typically measure from 11.5 to 16 feet long (3.5 to 5 meters), but they have been known to exceed 18 feet (5.5 meters) in length. Individual crocodiles attack anything the same size or smaller than them. They are occasionally known to hunt in packs, in which they can take down animals as large as hippos and rhinos. Nile crocodiles occasionaly prey on human beings, with estimates ranging from several hundred to several thousand deaths a year.

The ancient Egyptians feared and revered Nile crocodiles and worked them into their mystic religions. In modern times, the big animals were heavily hunted for their leather, although recent protections have helped stabilize the population at an estimated 250,000 to 500,000. 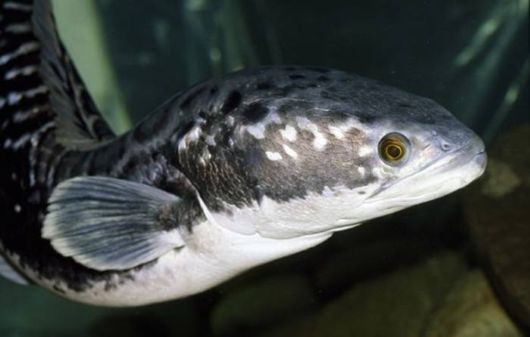 Photograph by Jason Edwards, National Geographic
Snakeheads are often feared in the West, where populations of the aggressive fish have occasionally taken root as invasive species. After a fisherman found a Northern snakehead (Channa argus) in a pond in Maryland, it caused a media sensation. Biologists warned that the large freshwater fish could readily become established in North America, where it could wreak havoc on native ecosystems.

The voracious top-level predators can reach a length of three feet (one meter). They prey on invertebrates, frogs, and smaller fish, though they are known to attack anything moving when they are breeding.

Snakeheads can breathe air and can survive out of water for up to four days. They can survive much longer periods of drought by burrowing into the mud. Several species of the fish are native to much of Asia, where they are commonly caught and are prized for the dinner table. They are also frequently kept as aquarium fish and are noted for their aggressive behavior. 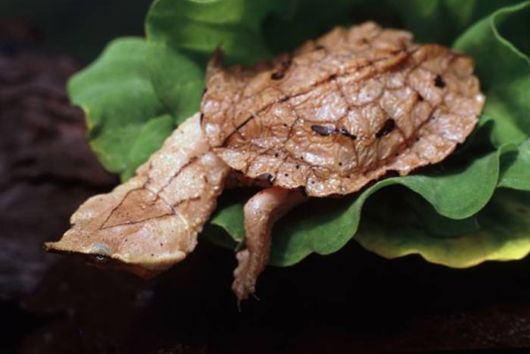 Photograph by Alessandro Mancini, Alamy
A mata mata (Chelus fimbriatus) is a freshwater turtle that inhabits the Amazon and Orinoco basins in South America. The bizarre turtles are entirely aquatic, although they prefer shallow, stagnant water, where they can easily reach their head out of water to breathe.

The mata mata can grow quite large, up to 33 pounds (15 kilograms). They feed on invertebrates and fish and aren’t dangerous to people, despite their appearance.

Mata mata are fairly sensitive to water quality, both in captivity and in the wild, so they can be harmed by pollutants. 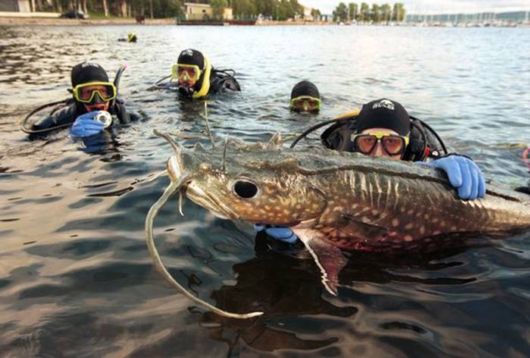 Photograph by John Robertson, Alamy
Divers work with a model European catfish in the Great Lake at Ostersund in Sweden. Large catfish live in many rivers throughout the world, where they are important scavengers.

The largest on record is the Mekong giant catfish, which has reached recorded sizes up to 10.5 feet (3.2 meters) and 660 pounds (300 kilograms). Once distributed across several countries in Southeast Asia, the Mekong giant catfish is now critically endangered, thanks to habitat disruption. Not much is known about the world’s biggest freshwater fish, although conservation efforts are underway.

Big catfish are rarely considered dangerous to people. The Mekong species can live to be more than 60 years old. 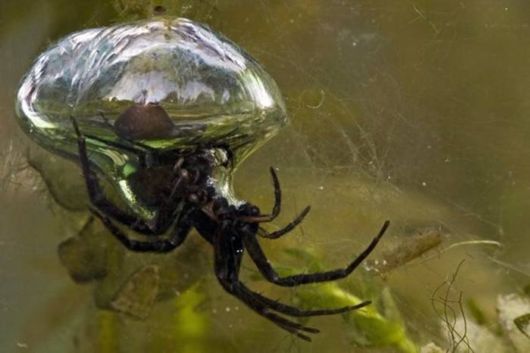 Photograph by Gerhard Schulz, Getty Images
The diving bell spider (Argyroneta aquatica) is the only known spider in the world that lives entirely underwater. Like other arachnids, it must breathe air, but it provides its own supply by forming a bubble, which it holds by hairs on its legs and abdomen. The spiders must occasionally return to the surface to replenish their air supply, although some gas exchange happens across the surface of their bubbles, so they don’t have to come up very often.

The diving bell spider is found in northern and central Europe and parts of northern Asia. Unusual for spiders, the males are bigger than the females, perhaps because the males are more active hunters.

The spiders can inflict a painful bite that is often accompanied by feverish symptoms. Those who are afraid of spiders may be disturbed to know they may not be safe from them, even in the water. 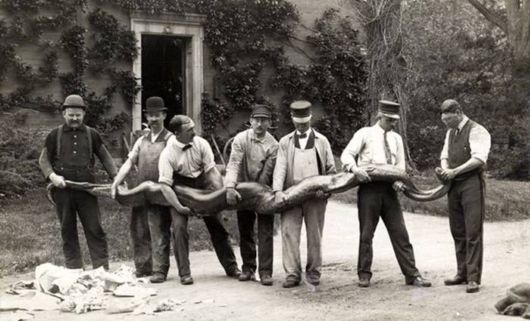 Photograph by Elwin R. Sanborn, National Geographic
Animal handlers hold a 19-foot anaconda at the Zoological Gardens. Among the world’s largest snakes, anacondas live in rivers and wetlands of South America. The word anaconda is thought to come from the Tamil word anaikolra, which means elephant killer, alluding to the reptile’s fearsome reputation.

Anacondas feed on fish, birds, reptiles, and small mammals, though they have been known to take the occasional domestic animal. The big snakes can be dangerous to people, though reports of deliberate predation are very rare.

Like other boas, anacondas are nonvenomous, and they often kill their prey by constricting it. Like other snakes, they swallow their prey whole. 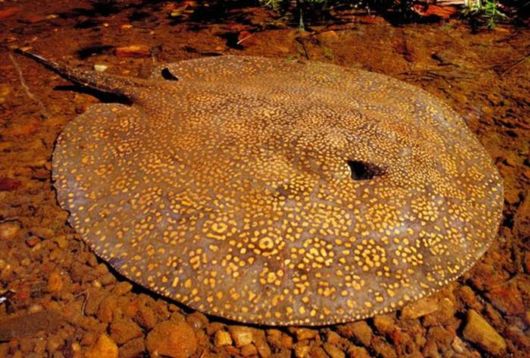 Photograph by Fenolio Dante, Getty Images
Freshwater stingrays are known to inhabit rivers in Southeast Asia and northern Australia, where they can reach enormous proportions, measuring up to 16.5 feet (5 meters) long and up to 1,320 pounds (600 kilograms). However, very little is known about these creatures, including how many are left, and if they ever enter saltwater.

Freshwater stingrays are hard to see, because they often bury themselves in river sediments. They hunt for clams and crabs by detecting their electric impulses. There are reports of the big animals overturning boats, though they rarely attack people.

Even so, stingrays can pack a powerful punch; they have a barb at the base of their tail that contains deadly poison and a stinger as long as 15 inches (38 centimeters).

Many scientists fear that freshwater stingrays are threatened by habitat loss and pollution. 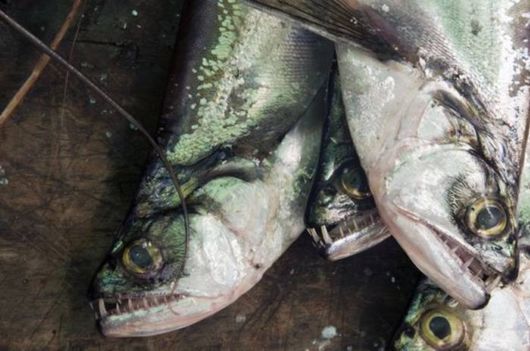 Photograph by Peter McBride, National Geographic
Fanged vampire fish, or payara (Hydrolycus scomberoides), are offered at a market in Pevas, Peru, on the Amazon River. This fearsome, little-known fish is prized for its meat in the Amazon and Orinoco basins.

Vampire fish prey primarily on smaller fish, especially piranhas, which they impale with their long, sharp fangs. The intimidating teeth can grow up to six inches long. 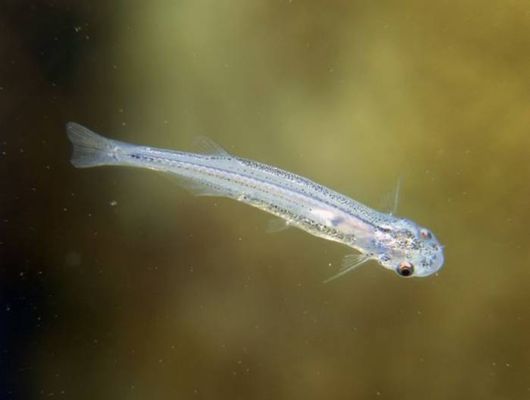 Photograph by Max Gibbs, Getty Images
Perhaps the most feared freshwater species of all, candiru are parasitic catfish in the family Trichomycteridae. These small, narrow fish normally feed on the gills of larger fish in the Amazon. However, over the past few centuries there have been reports of these creatures lodging in the urethras of men and women.

Some native peoples along the Amazon have described means of preventing such a disturbing infection, which is said to be hard to remedy, even with surgery. Protection measures are said to include tough clothing, tying off extremities with ligatures, and avoiding urination around rivers. It was long believed that urine attracted the candiru, although a recent study Candirurange. 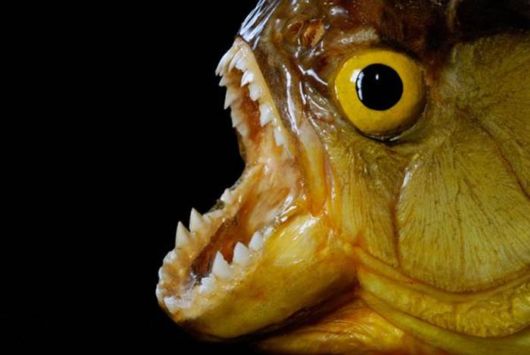 Photograph by Martin Shields, Alamy
Notorious for their sharp teeth and voracious appetites, piranhas inhabit several of the major river basins in South America. These omnivorous fish are known for their taste for meat, although attacks on human beings are quite rare, despite breathless accounts from early explorers.

In a historic visit to Brazil, Theodore Roosevelt famously saw a group of piranhas shredding pieces of a cow carcass in seconds. His dramatic account would color popular imagination for years, even though it was based on a manipulated spectacle in which fishermen blocked off a group of the fish and starved them beforehand.

Still, piranhas are important scavengers and predators in their native rivers, and they often resort to cannibalism if food gets scarce. It’s true that local fishermen occasionally have scars from close encounters with them.

It’s unknown how many species of piranhas exist, with estimates ranging from 30 to 60. ?Brian Clark Howard. 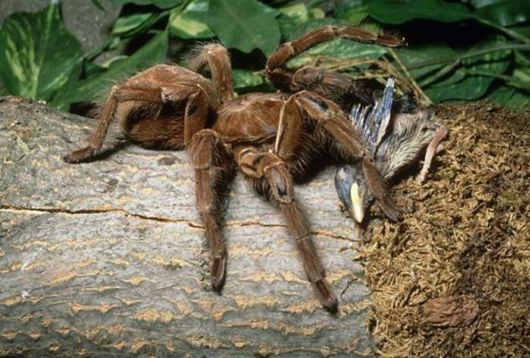 Photograph by John Mitchell, Getty Images
The second largest spider in the world, the goliath bird-eater (Theraphosa blondi), is related to the tarantula. It received its fearsome name after Victorian explorers witnessed one feasting on a hummingbird.

The big spiders inhabit marshy land in the rain forests of nothern South America, where they can grow to a leg span of up to 12 inches (30 cm) and can weigh more than 6 ounces (170 grams). As with many other spiders, females may eat the males after mating. Partially as a result, males have a lifespan of 3 to 6 years, while females have a lifespan of 15 to 25 years.

Despite the spider’s name, birds are not the main prey of the goliath bird-eater. They prefer to eat insects and other invertebrates, although they will occasionally eat small vertebrates. The big spiders are not generally considered dangerous to human beings, although they can bite if disturbed, leaving a wound about as painful as a wasp sting. They can also release hairs that irritate the skin. 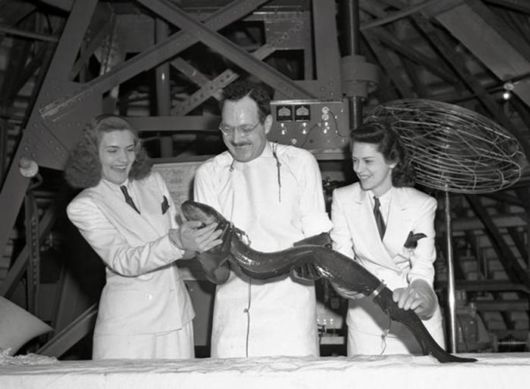 Photograph from Bettman Archive/Corbis
Electra the electric eel (Electrophorus electricus) demonstrates her shocking power at Ford Motor Company’s "Cycle of Production" exhibit at the 1939 New York World’s Fair. Despite their name, electric eels are actually a type of knifefish and are more closely related to catfish than they are to true eels. These unusual fish inhabit waterways in the Amazon and Orinoco basins of South America, where they hunt prey and defend themselves by producing powerful bursts of electricity.

Electric eels gulp air from the surface in order to breathe. Thanks to specialized internal organs, they can produce pulses of electricity greater than 500 volts, with a current greater than one amp. That’s enough to kill an adult human being.

Electric eels mostly hunt invertebrates, though adults also consume fish and small mammals. They only attack human beings if they are disturbed. They tend to live in murky, stagnate waters. Scientists have long been fascinated by the species and have probed its impressive electrical abilities. 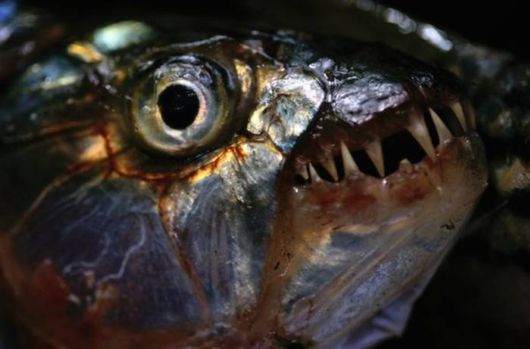 Photograph by Chris Johns, National Geographic
Widely distributed across much of Africa, tiger fish are fierce predators with large, razor-sharp teeth. They often hunt in packs and occasionally eat large animals. Attacks on human beings are rare but not unheard of.