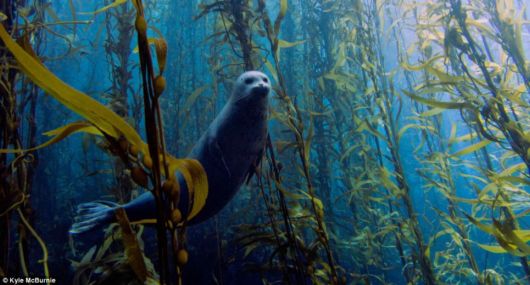 This image of a harbor seal was taken in a kelp forest at Cortes bank near San Diego in California by Kyle McBurnie. It was the overall winning image submitted to the Rosenstiel School of Marine and Atmospheric Science?s (RSMAS) underwater photography competition in Miami 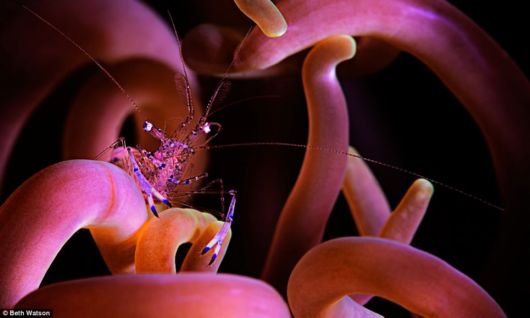 This shot of anemone shrimp was taken in Puerto Galera in the Philippines by Beth Watson from Missouri. It was the winning picture in the RSMAS macro category. Most anemone shrimp live, and are totally dependent, on sea anemones. They are vulnerable to predators when they are not attached to their hosts and some lie parallel to the anemone?s tentacles to camouflage themselves further 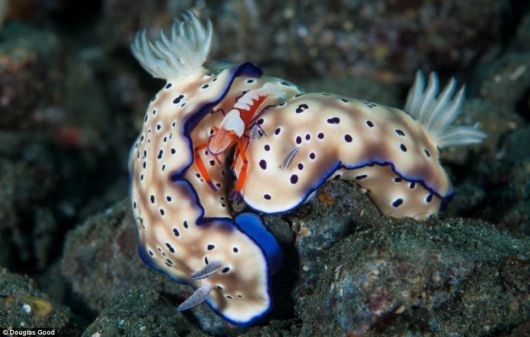 The second place macro picture was this image of an emperor shrimp sat on top of two nudibranch molluscs. It was taken at Dinah?s Beach in Papua New Guinea by Douglas Good from Pennsylvania. The nudibranches resemble the worms in 1986 film, Labyrinth. The word ?nudibranch? comes from the Latin nudus for naked, and the Greek, brankhia, which means gills 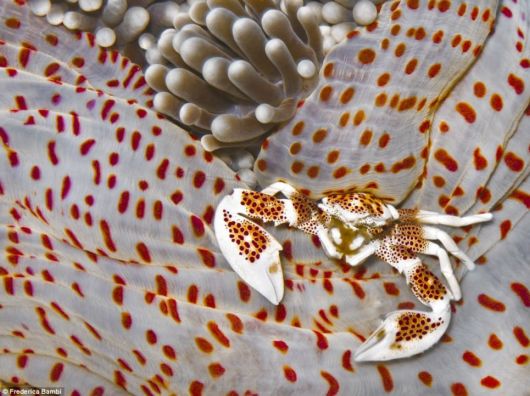 The third place in the macro category of the RSMAS underwater photography competition went to Italian photographer Frederica Bambi. It shows a porcelain crab on an anemone at Pescador Island, Cebu in the Philippines. This porcelain crab?s official name is Neopetrolisthes maculatus. The porcelain crab gets its nickname because of its delicate shell. They are typically less than 15 mm wide and readily lose limbs when attacked 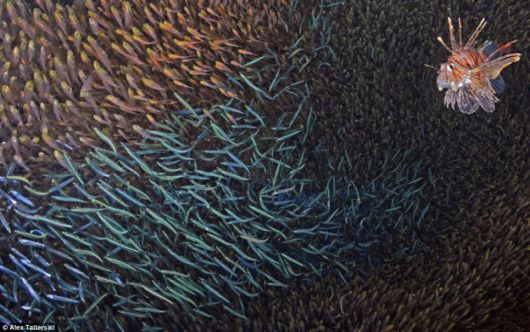 A photographer from Bournemouth took this winning shot of a lionfish on the Thistlegorm wreck in the Red Sea. Alex Tattersall took the shot during a trip to Egypt and it won first place in the wide-angle category. The SS Thistlegorm was a British naval ship built in 1940 in England. She was sunk on 6 October 1941 near Ras Muhammad in the north African country and is now a well known diving site 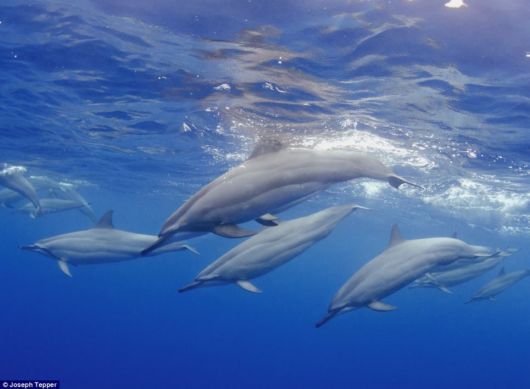 Second place in the wide-angle category went to Joseph Tepper, from New York. It shows spinner dolphins swimming in a small inlet off the Kona coast of Hawaii. Dolphins work as a team to capture fish but they also hunt individually. They search for prey using echolocation, which is similar to sonar 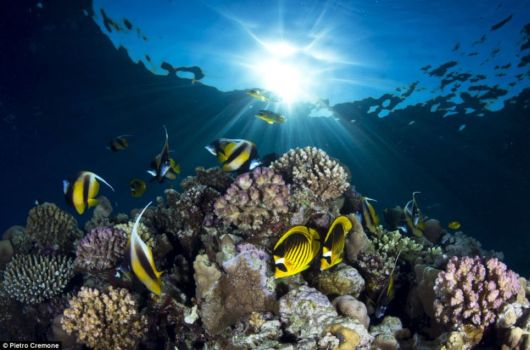 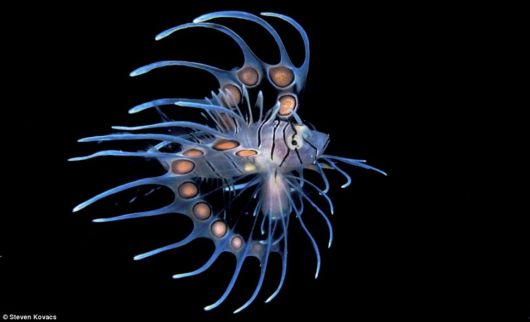 First place in the fish or marine animal portrait category was won by Steven Kovacs. This juvenile lionfish was shot during a night dive in Roatan in Honduras. Lionfish, also known as pterois, have red, white, creamy, or black bands to warn off predators such as moray eels and bluespotted cornetfish. They also have pectoral fins and venomous spiky fin rays 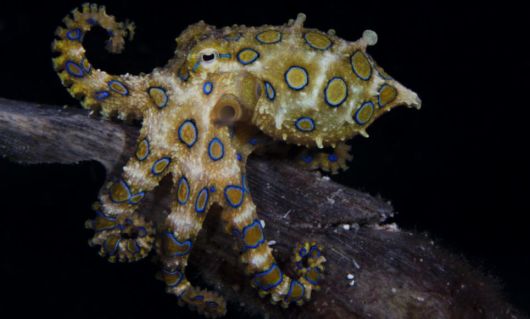 This greater blue-ringed octopus was photographed near Malapascua island in the Philippines. The image won second place in the fish or marine animal portrait category and was taken by Marcello DiFrancesco from Italy. The octopus is one of three species of venomous blue-ringed octopuses that produce venom in its salivary glands. The venom called tetrodotoxin causes paralysis and respiratory arrest and can lead to heart attacks in victims due to a lack of oxygen 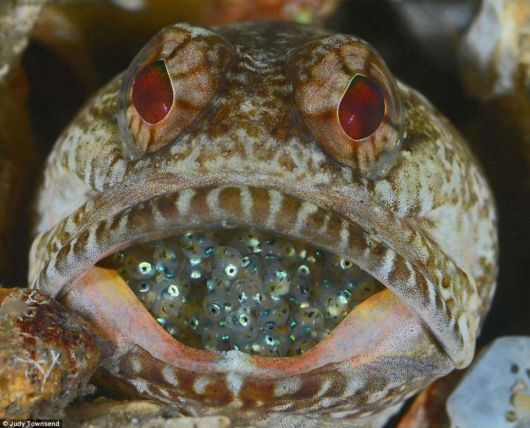 Third place in the fish or marine animal portrait category was taken by Judy Townsend. It shows a male dusky jawfish protecting his eggs inside his mouth. The image was taken at the Blue Heron Bridge in Riviera Beach in Florida. Jawfishes are called mouthbrooders, which meaning their eggs hatch in their mouths in a bid to protect them from predators. The eggs are typically kept in the fishes? mouths for between eight to 10 days before hatching 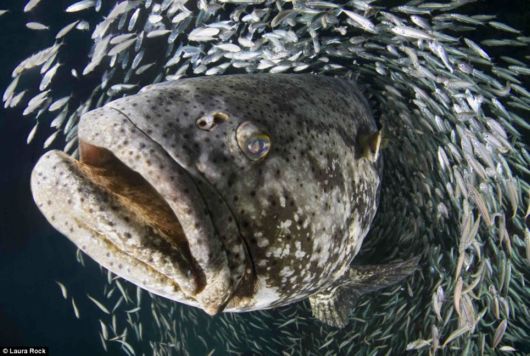 The best student entry in the RSMAS underwater photography competition was won by Laura Rock from Florida. It shows a goliath grouper fish, official name, Epinephelus itajara, during the annual spawning event in Jupiter in Florida. Goliath groupers mainly eat mostly small, slow-moving fish and crustaceans. They can live to their 60s and begin to spawn when they reach about four feet long. They will travel long distances ¿ as much as 180 miles ¿ to reach summer spawning sites 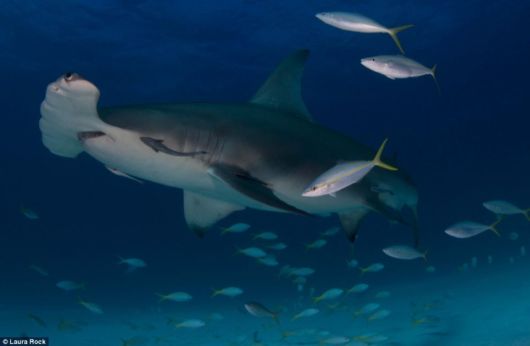 Laura Rock from Florida also won second place in the student category with this shot of a great hammerhead shark in Bimini in Bahamas. The average great hammerhead grows to around 20 feet long. The great hammerhead rarely attacks humans but will defend itself when hunted for large fins. The fins are valuable in Asia as the main ingredient of shark fin soup 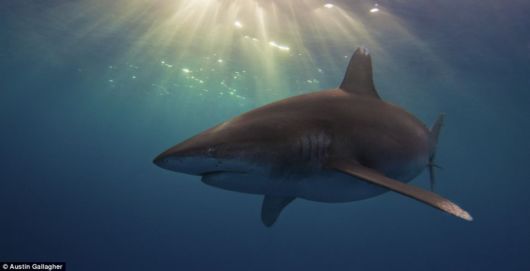 This photo of an oceanic white tip shark was taken by third place student winner Austin Gallagher, from Florida. He took the image near Cat Island in the Bahamas. Renowned oceanographer Jacques Cousteau labelled the white tips as ?the most dangerous of all sharks?. In 1945, after the torpedoing of the USS Indianapolis, whitetips were thought to be responsible for the deaths of up to 800 sailors