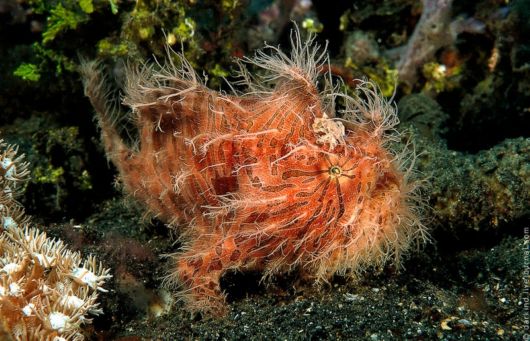 Welcome to Indonesia treated by divers as a unique region that contains the largest amount of resorts and diving areas in the world. Lembeh Strait on the northern part of the Sulavesi island is very popular among those who prefer diving. 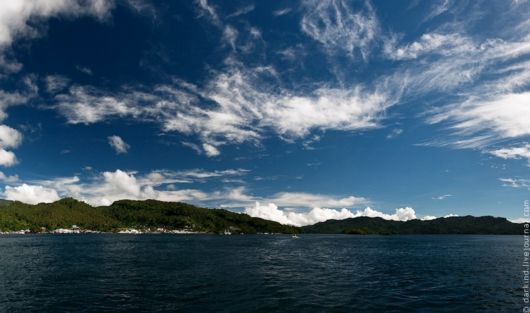 Underwater creatures of this region are loved by photographers taking macropictures and divers who are fond of muck diving. Muck diving is searching and examining dark bottom covered with corals and other brightly colored details. The hairy frogfish in the picture is famous with its thready skin protrusion. It usually hides on the bottom and hunts using a part of its spinal fin as a which is moved and attracts small fishes. 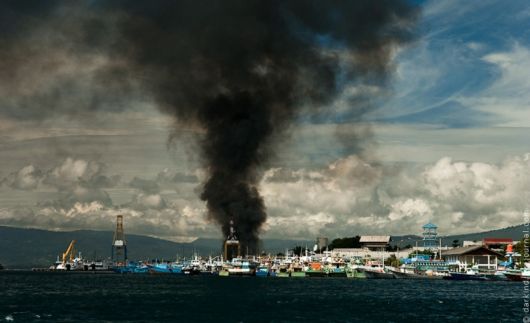 The Strait is not rather big. It is just 1.5-2 km wide and 15 km long. Manado is the closest international airport. This port is very big and developed. It has over dozens of vessels engaged in fishing and transportation of agricultural products. Its location in the southern part of the strait is convenient for divers. 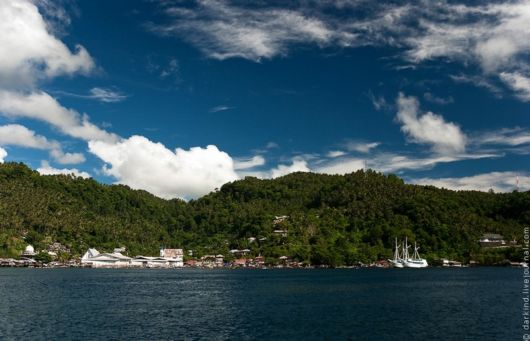 The coast from the land side is covered with a large variety of villages and different constructions. Fertile lands are covered with plantations. Less umber of buidlings can be observed from the Lembeh side where land is privately owned and is waiting for foreign investors. 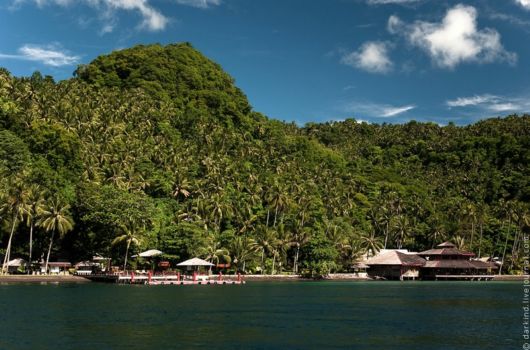 Diving resorts that combine comfortable living, excellent restaurants and multi-functional diving center are located along the coast. It’s very convenient as no additional expenses are required. The Kungkungan Bay Dive Resort is presented in the picture. 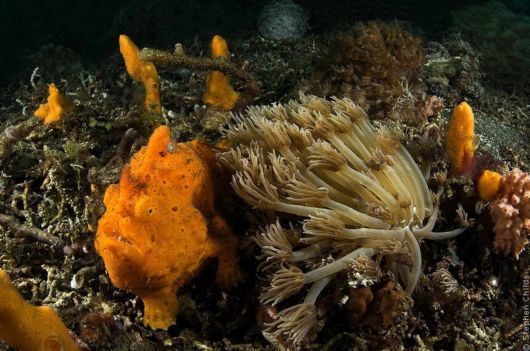 Thus, muck diving is a favorite thing done by photographers and people who are ready to examine unknown things. They have enough patience to take pictures of a shy frogfish or examining a tiny crayfish. Another Commerson’s frogfish sitting under the coral colony has pulsating polyps that keep open and close in the process of the creature’s nutrition. 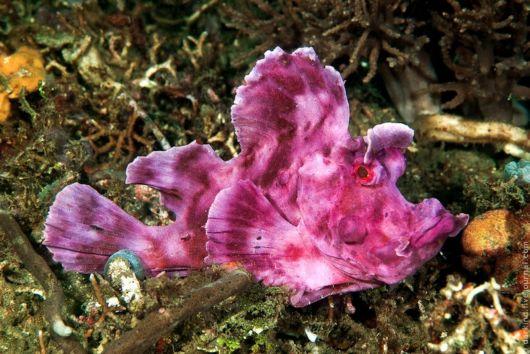 During one immersion under control of an experienced guide one can see 10 kinds of various fishes. Purple Scorpiofish is another unusual inhabitant of the sea bottom. Itcan cosume one-fourth part of a similar fish. 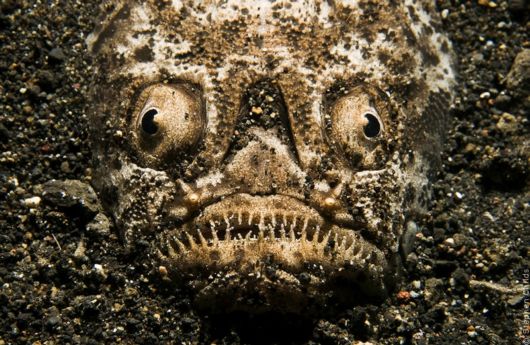 When you see this fish try not to be scared. The Stargazer or Uranoscopus chinensis is buried in the ambush all day long.Only its eyes and mouth waiting for the coming food are visible. 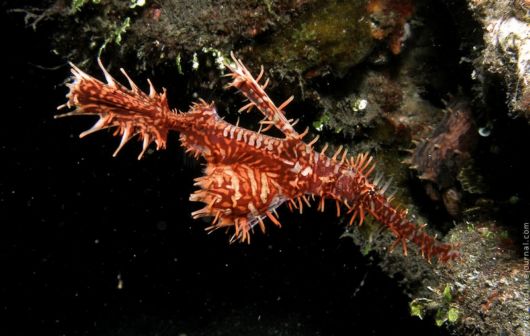 The Solenostomus paradoxus is a pipefish of the family Solenostomidae that reaches a maximum length of 12 cm. They vary in color from red, yellow to black and are almost transparent. They feed mostly on mysids and benthic shrimp. 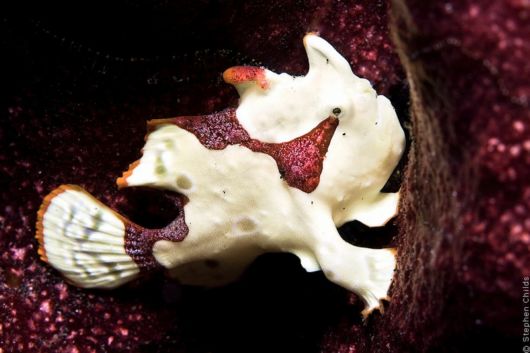 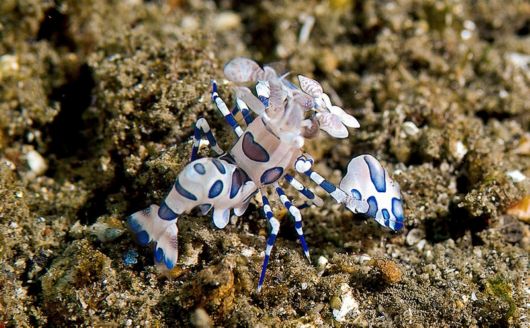 The Harlequin Shrimp was first scientifically described in 1852, and has also been referred to as the Painted Dancing Shrimp. It has a white body with large red, purple, or brown spots. The male is slightly smaller than the female. The female has blue tipped abdominal legs, while the legs of the male are transparent. It differs from its close cousin, H. elegans, which has pale blue spots. It has large claws (chelipeds) which are for show only; it does not use them for hunting. 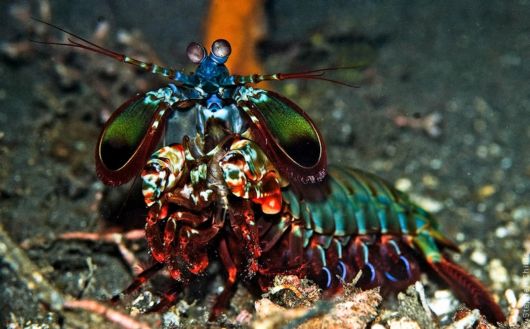 The peacock mantis shrimp, Odontodactylus scyllarus, is one of the larger, more colorful mantis shrimps commonly seen, ranging in size from 3 to 18 centimeters. An active hunter, it prefers gastropods, crustaceans, and bivalves, and will repeatedly smash its prey until it can gain access to the soft tissue for consumption. It is reported to have a "punch" of over 50 miles per hour (80 km/h). This is the fastest recorded punch of any living animal. 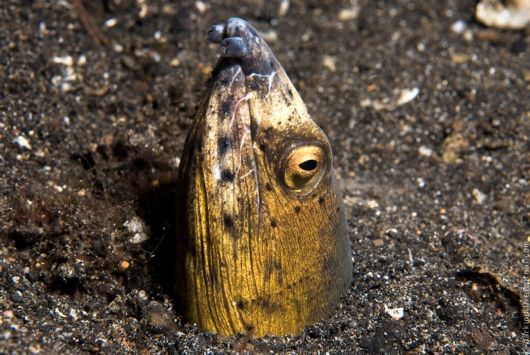 Most species of the black finned snake ell or Ophichthus altipennis spend their time buried in sand and hunt small fishes and crustaceans by sense of smell. Reproductively, most members of this family are nonguarders. The main mode of swimming of adult fish in this family is anguilliform. 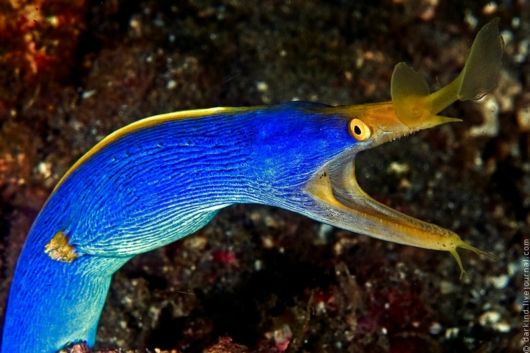 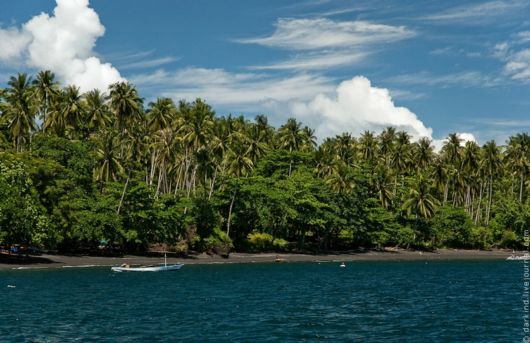 The leaf-nosed moray ell or Rhinomuraena quaesita is more active at night and hides in holes and crevices during the day. Vicious reputation is undeserved, although some species will bite if provoked. Reproductively, most members of this family are nonguarders. The main mode of swimming of adult fish in this family is anguilliform . 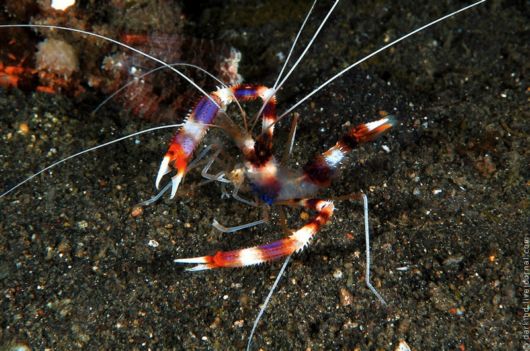 The Banded coral shrimp or Stenopus hispidus reaches a total length of 60 millimetres and has striking colouration. Stenopus hispidus lives below the intertidal zone, at depth of up to 210 metres on coral reefs. It is a cleaner shrimp, and advertises to passing fish by slowly waving its long, white antennae. S. hispidus uses its three pairs of claws to remove parasites, fungi and damaged tissue from the fish. 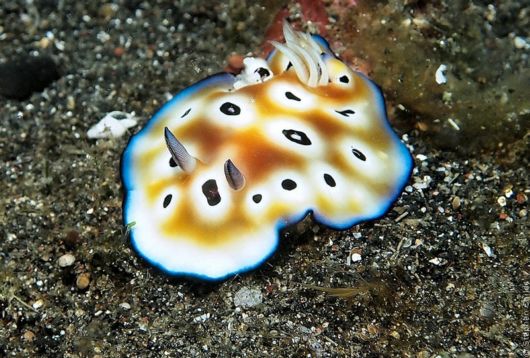 The Chromodoris leopardus is a species of colorful sea slug, a dorid nudibranch, a marine gastropod mollusk in the family Chromodorididae. 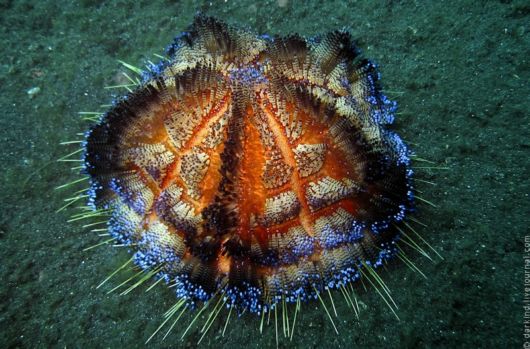 The Fire Urchin or Asthenosoma varium has Very mobile, short spines, arranged in rectangular areas, separated by spineless areas. A. varium sting can be very painful, a strong local pain due to venom injection can last for hours. 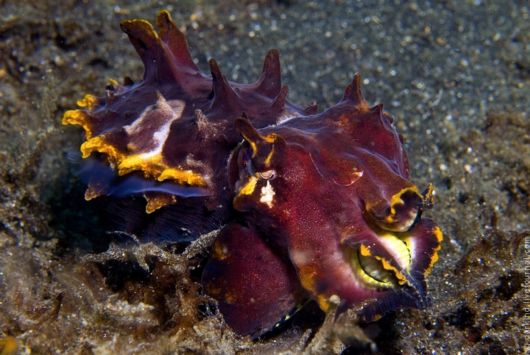 The Pfeffer’s Flamboyant Cuttlefish or Metasepia pfefferi is a robust-looking species, having a very broad, oval mantle. This particular species of cuttlefish is the only one known to walk upon the sea floor. Due to the small size of its cuttlebone, it can float only for a short time. The species is active during the day and has been observed hunting fish and crustaceans. 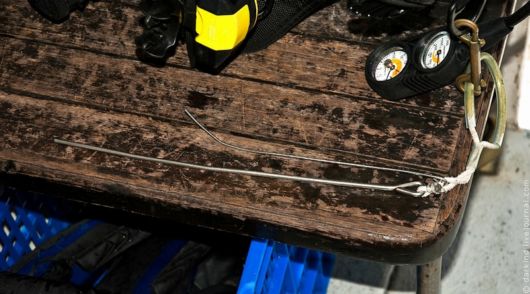 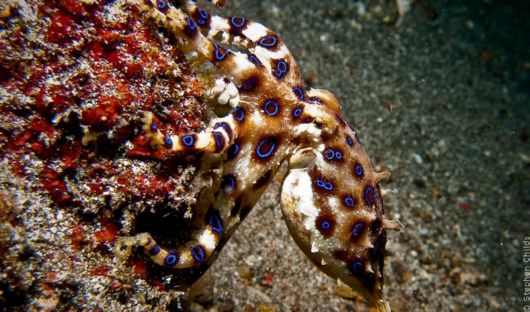 The Blue ringed octopus or Hapalochlaena lunulata is the most deadly of all cephalopods. The common name comes from the bright blue rings that appear when the blue-ringed octopus is alarmed. feeds on small crabs, hermit crabs, and shrimp that it hunts during the day. Two types of poison secreted by two separate poison glands are used against prey and predators. 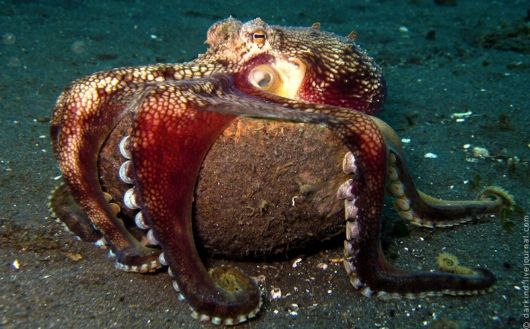 The Coconut Octopus or Amphioctopus marginatus is a medium-sized cephalopod belonging to the genus Amphioctopus. It commonly preys upon shrimp, crabs, and clams, and displays unusual behavior, including bipedal walking and gathering and using coconut shells and seashells for shelter. 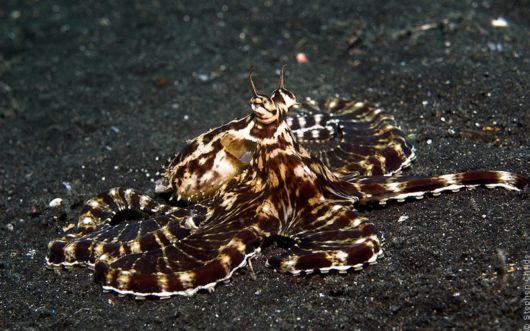 The Mimic Octopus or Thaumoctopus mimicus is a species of octopus that has a strong ability to mimic other creatures. It grows up to 60 cm (2 feet) in length. Its normal colouring consists of brown and white stripes or spots. Based on observation, the mimic octopus may decide which animal to impersonate depending on local predators. For example, when the octopus was being attacked by damselfish, it was observed that the octopus appeared as a banded sea snake, a damselfish predator. The octopus impersonates the snake by turning black and yellow, burying six of its arms, and waving its other two arms in opposite directions. 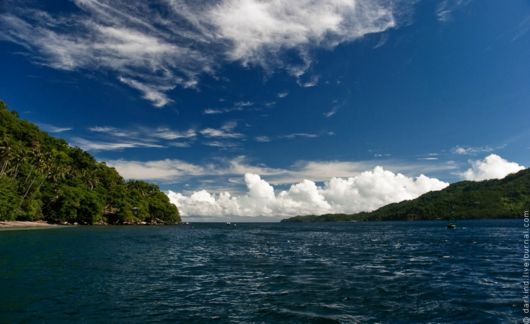 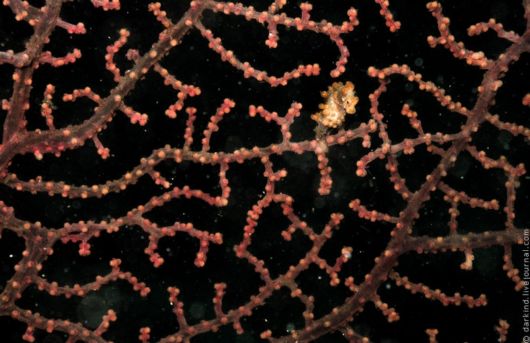 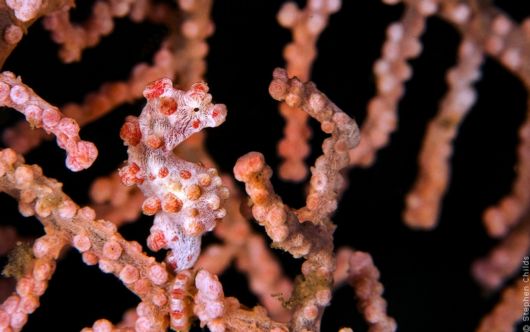 This species is known to occur only on gorgonian corals of the genus Muricella, and has evolved to resemble its host. The tubercles and truncated snout of this species match the color and shape of the polyps of the host gorgonian, while its body matches the gorgonian stem. The camouflage is so effective, the original specimens were discovered only after their host gorgonian had been collected and placed in an aquarium. 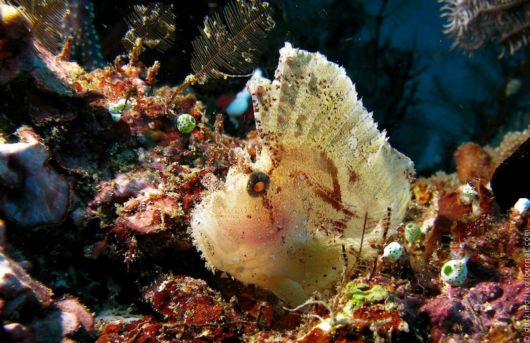 The Leaf Scorpionfish is a small compressed scorpion fish, with a high long sail like dorsal fin that is often lifted up. It has a variably developed ‘beard’ of fine appendages around the mouth and algae and hydroids can grow on its skin. It is known to shed its skin periodically. The colouration of the Leaf Scorpionfish is variable, ranging from white, yellow, pink, red, brown and green. 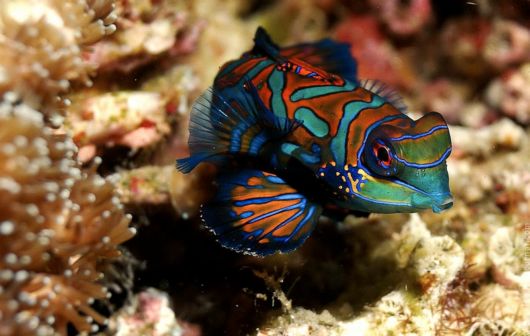 The Mandarinfish or Mandarin dragonet is a small, brightly-colored member of the dragonet family, which is popular in the saltwater aquarium trade. Mandarinfish are reef dwellers, preferring sheltered lagoons and inshore reefs. While they are slow-moving and fairly common within their range, they are not easily seen due to their bottom-feeding habit and their small size (reaching only about 6 cm). They feed primarily on small crustaceans and other invertebrates.