Halt! Who rows there? Meet Tyson the terrifying swan that attacks boaters if
they dare venture on his stretch of canal

With the sun shining and the water calm, it seemed like the perfect day for messing about in his boat. But this hapless kayaker didn?t bank
on Tyson ? an enormous swan which stalks this pretty waterway.

The bird, standing 4ft tall with an 8ft wingspan, batters anyone who dares to venture near his nest. Locals say he has attacked at least
three people in the past month.

His antics have meant that a two-mile stretch of the popular Grand Union Canal in Bugbrooke, Northamptonshire, is now a ?no-go area?
for children and families. 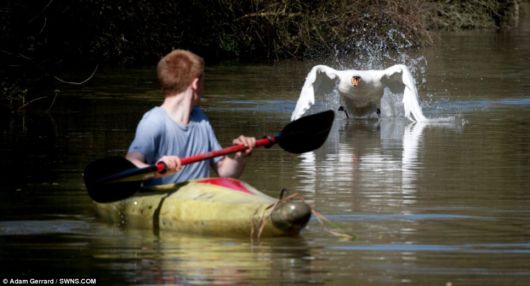 Joe Davies feels the wrath of Tyson the swan on the Grand Union Canal in Bugbrooke, Northamptonshire

Mr Davies, a chef at a nearby pub, admitted he was ‘bricking it’ when Tyson attacked 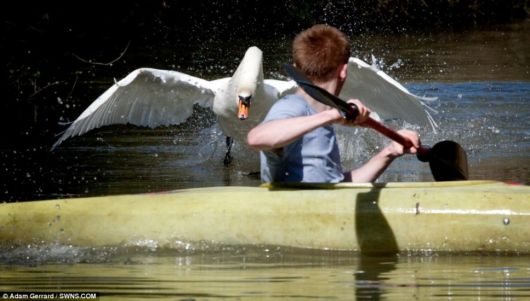 … but it was too late for Joe, as he capsized, thanks to the angry bird

The swan was caught on camera swooping on kayaker Joe Davies while he was paddling on the canal on Tuesday afternoon.

The 20-year-old is seen capsizing after Tyson goes into attack mode. Mr Davies said the incident had been ?terrifying?.

?I?d heard the rumours about Tyson, but I had never seen him before,? he added. ?He went for me as soon as I got in the water.

?I eventually capsized and he went for me as I was falling in, which made me panic. I?ve been kayaking on this stretch for five years and I?m

a confident boat user, but I was terrified.? 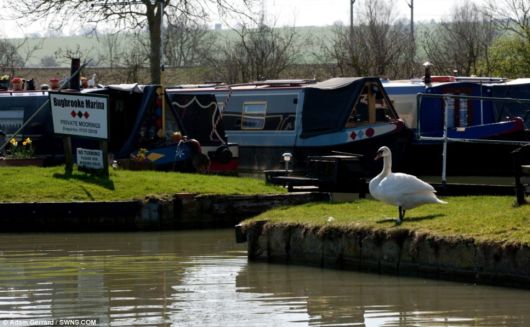