Death in the domain of the insects can be swift and cruel but retains a magnificence and beauty that is somehow at odds with the brutality of what is happening. Take a look at this collection of awesome photographs and see whether or not you agree – but beware! This is not for the squeamish!

Look Out Behind You

?Thus that which is the most awful of evils, death, is nothing to us, since when we exist there is no death, and when there is death we do not exist.? – Epicurus 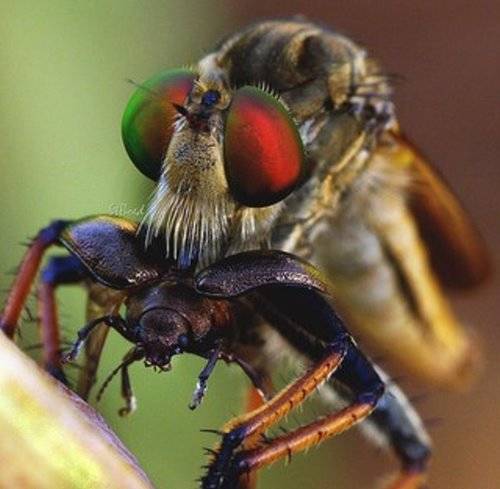 This Robber Fly is perhaps taking its name far too literally as it steals the life from an unsuspecting beetle. At this moment it is injecting its prey with saliva containing enzymes which paralyze the victim. The enzymes then dissolve the insides of the prey and the resulting mush can be sucked out through the proboscis.

?For death begins with life’s first breath And life begins at touch of death? – John Oxenham 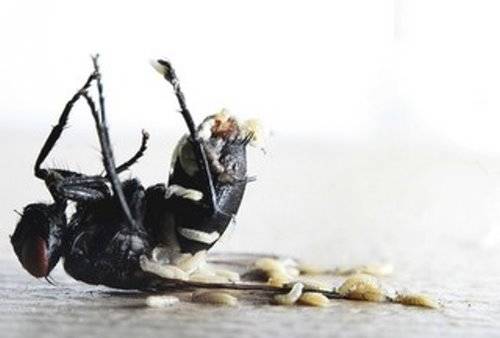 Out of every evil, it is said, some great good must come. Well, for good, read food in this case. This fly’s death was not in vain – the next generation finds him a tasty nursery snack on its road to adulthood.

?I am ready to meet my Maker. Whether my Maker is prepared for the great ordeal of meeting me is another matter.? – Winston Churchill. 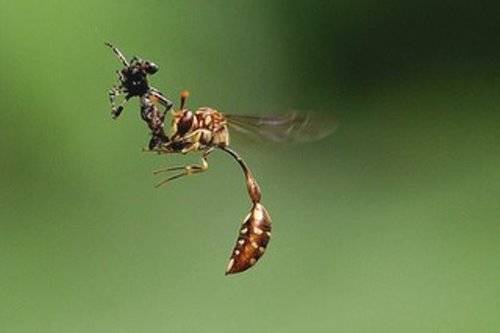 A spider wasp continues to tear in to its prey despite being on the wing. Previously it had attacked its prey and left it to die, returning for it later. Nature, of course, is oblivious to cruelty. Don’t feel sorry for the poor creature in the spider wasp’s jaws. There is plenty more where it came from!

?If my doctor told me I had only six minutes to live, I wouldn’t brood. I’d type a little faster.? – Isaac Asimov 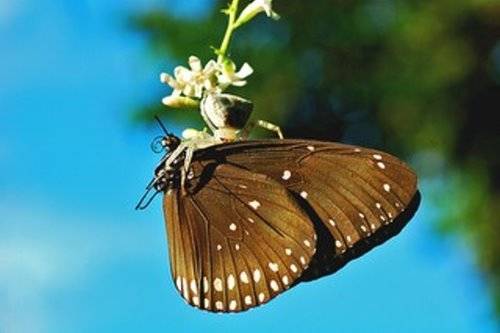 Cunningly camouflaged as a flower, this spider grabs the opportunity to seize a butterfly just as it was anticipating a long relaxing lunch of nectar. It will proceed to eat every last bit of the butterfly, wings and all.

Death Among The Lavender 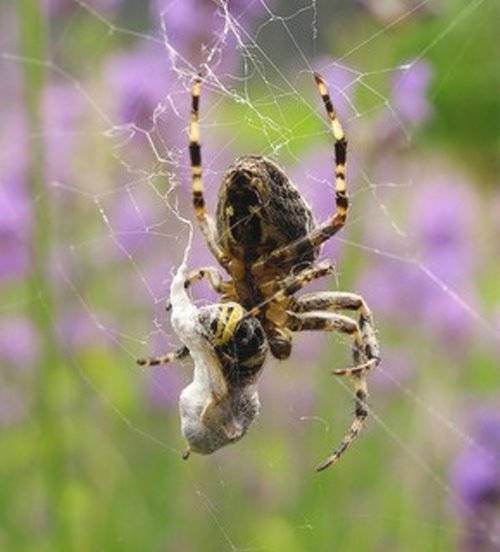 Death stalks a quiet English garden – it’s almost like something out of an Agatha Christie novel. Here a Garden Spider cocoons its wasp victim, to return later for a snack.

?Dying is a very dull, dreary affair. And my advice to you is to have nothing whatever to do with it.? – W. Somerset Maugham 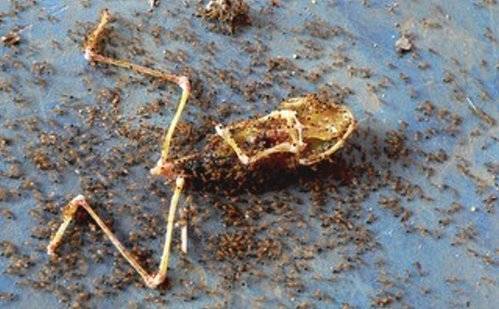 The circle of life, presented in all its gory glory. A frog is stripped to the bone by a host of young spiders, eager to gorge on its remains. So, one entity expires but leads to the sating of the hunger of so many others.

All You Can Eat Buffet

?As long as I have a want, I have a reason for living. Satisfaction is death.? – George Bernard Shaw 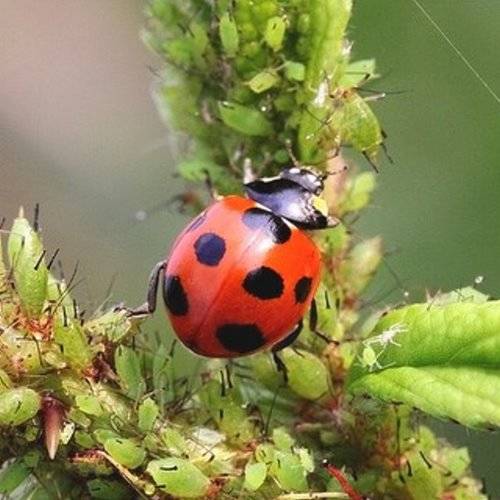 Greenfly and Ladybirds are one of those common sites in gardens and a lot of people believe the ladybird to be a vegetarian because of its attractive coloring and the fact it has been anthropomorphized in so many children’s books. However, the Ladybird is a voracious fan of the Greenfly – literally – and will devour as many as it can eat.

?The fear of death is the most unjustified of all fears, for there’s no risk of accident for someone who’s dead.? – Albert Einstein 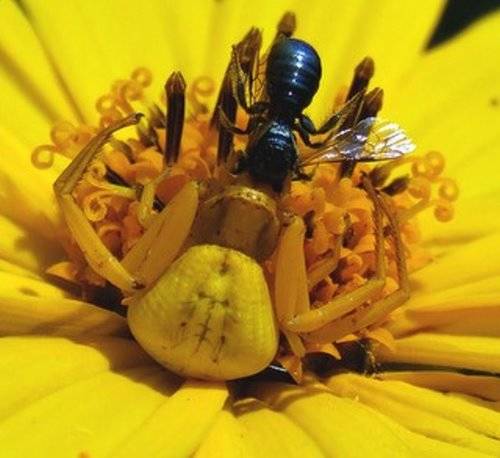 The crab spider is almost the chameleon of the insect world and many different species can hide themselves, barely indistinguishable amongst certain plants. Here, a crab spider that has been laying patiently in wait gets its just reward in the form of a bee which, until the first and final lunge, had been blissfully unaware of its encroaching fate. 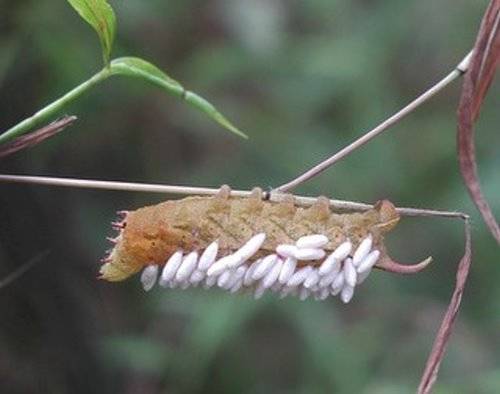 You have seen the film Alien, yes? Well, perhaps the Braconid Wasp was the inspiration for that particular nightmare of science fiction. Here we see the result of the wasp’s unwillingness to raise its own young. It has paralyzed the Hog Sphinx Moth caterpillar and its eggs were then laid inside the caterpillar. The cocoons are now pupating on the exterior of the poor thing. Before you ask, yes, it is still alive.

Kiss of the Spiderwoman?

?To die will be an awfully big adventure? – J.M. Barrie (Peter Pan) 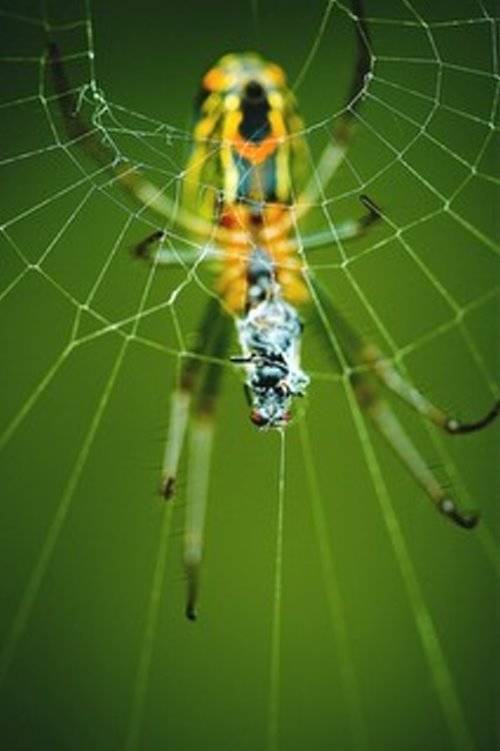 When death comes, it is often in glorious Technicolor, even though the insect itself will not see it in quite the way we do. Woody Allen once maintained that he didn’t want to achieve immortality through his own work, but by not dying. Unfortunately, Mr. Allen, that will not be the case.

?Our life dreams the Utopia. Our death achieves the Ideal.? – Victor Hugo 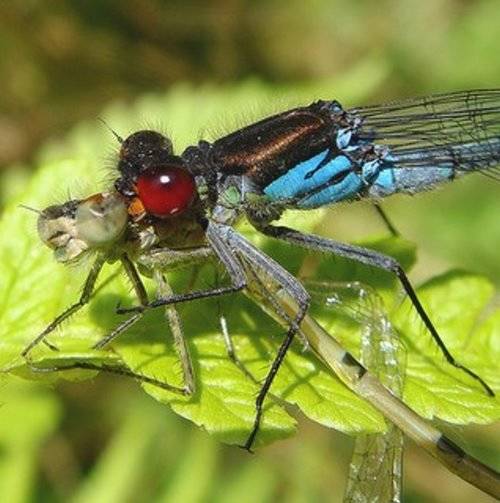 Here a damselfly gives a vampire’s touch to an unwitting newly hatched member of its own species. It is amazing that, despite the subject of the photograph, the beauty of both insects shines through. Strange how death can be so gorgeous, isn’t it?

The First Rule of Fight Club

?You only live twice. Once when you are born and once when you look death in the face.? – Ian Fleming (You Only Live Twice) 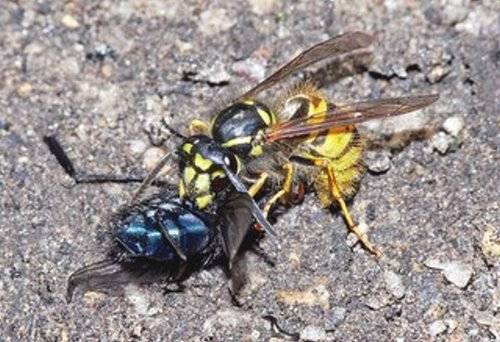 A wasp and a blue bottle have a chance encounter. This particular spat could leave only one winner. The day of our death is, though, perhaps the birth of eternity. Who can say?

Death Gets a Visitor

?Death is a natural part of life. Rejoice for those around you who transform into the Force? – Yoda 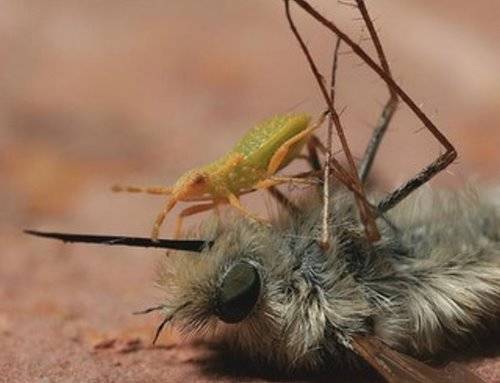 This dead bee fly has been discovered by a much smaller scavenger, which will no doubt either lay its eggs in the carcass or eat it. Whatever happens, it won’t go to waste!

?Death’s gang is bigger and tougher than anyone else’s. Always has been and always will be. Death’s the man.? – Michael Marshall 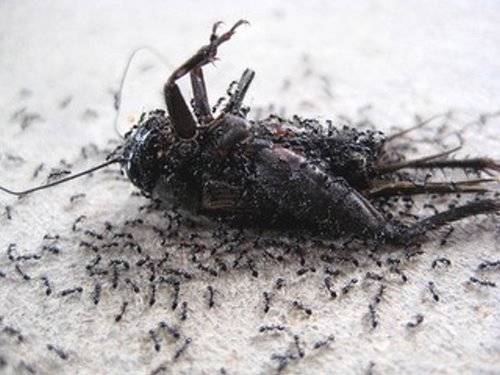 One dead creature can be the source of life for hundreds if not thousands of others, so does life go on in a way? The ancient Egyptians believed in the afterlife. They believed they would be asked two questions – and their answers would determine whether or not they would go on to the afterlife. ?Did you bring joy?? was the first question. And the second? ?Did you find joy??

Do Not Interrupt My Lunch!

?Do not fear death so much, but rather the inadequate life.? – Bertol Brecht 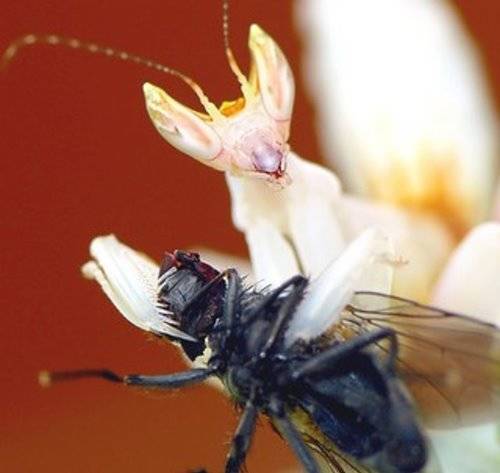 Can insects look peeved? Perhaps the tendency to anthropomorphize is too great to resist, but this Orchid Praying Mantis is looking ever so slightly miffed at being photographed while it is about to enjoy its breakfast.

?Fear not death, for the sooner we die the longer we shall be immortal.? – Benjamin Franklin 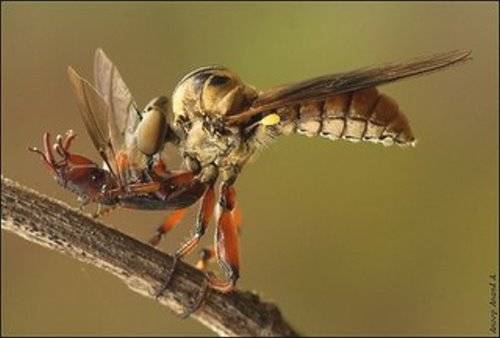 This robberfly savagely attacks its prey – in a few seconds the poor victim will be eviscerated. It is amazing how quickly a life can be extinguished but, unlike Homo sapiens, the insects that we have seen in this collection do it for survival, not for gluttony or sport. We cannot squirm at the sight of these creatures killing and dying without at least a little introspection. Or can we?

Watch What You Eat!

?If you should die before me, ask if you could bring a friend? – Stone Temple Pilots 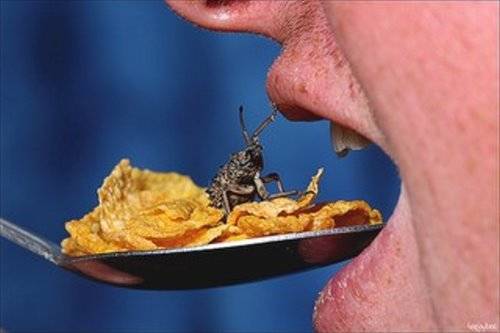 Always be careful. After all, they do say you are what you eat!