The whale shark, Rhincodon typus, is a slow moving filter feeding shark that is the largest living fish species. It can grow up to 12.2 m. (40 ft.) in length and can weigh up to 13.6 tonnes (15 short tons). . The shark is found in tropical and warm oceans and lives in the open sea and can live for about 70 years. The species is believed to have originated about 60 million years ago. 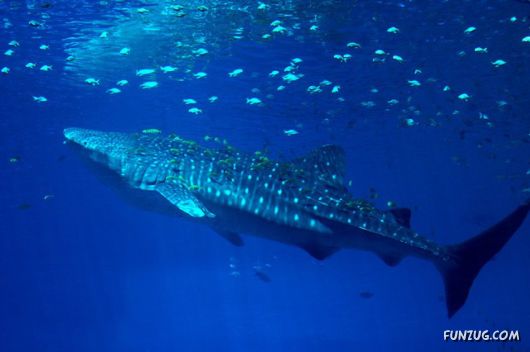 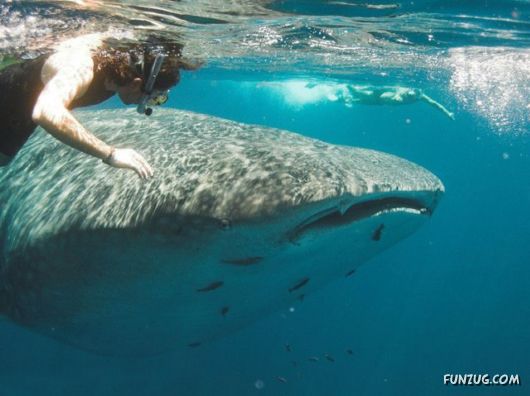 This distinctively-marked shark is the only member of its genus Rhincodon and its family, Rhincodontidae (called Rhinodontes before 1984), which is grouped into the subclass Elasmobranchii in the class Chondrichthyes. 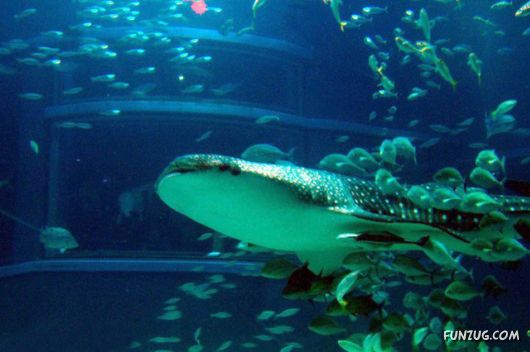 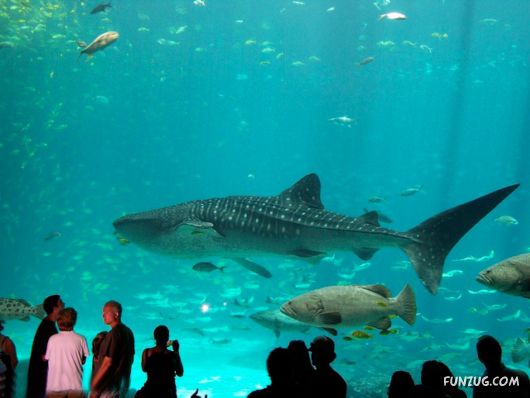 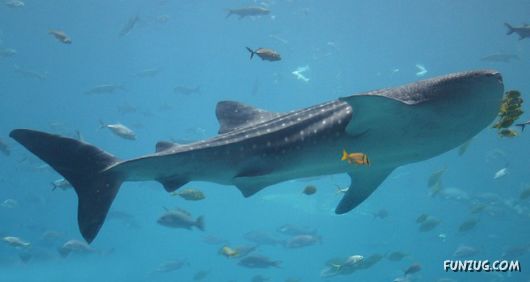 The species was first identified in April 1828 following the harpooning of a 4.6-metre (15.1 ft) specimen in Table Bay, South Africa. It was described the following year by Andrew Smith, a military doctor associated with British troops stationed in Cape Town. He proceeded to publish a more detailed description of the species in 1849. The name "whale shark" comes from the fish’s physiology; that is, a shark as large as a whale that shares a similar filter feeder eating mode. Known as a deity in a Vietnamese religion, the whale shark is called "Ca Ong", which literally translates as "Sir Fish". 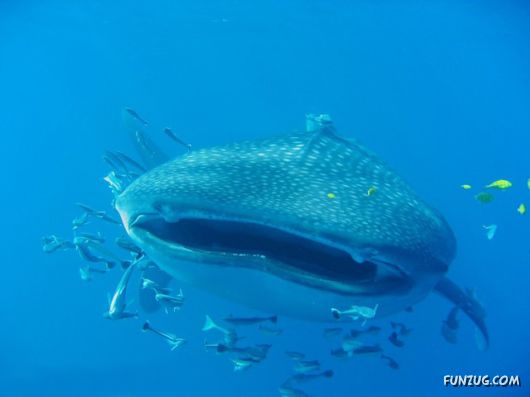 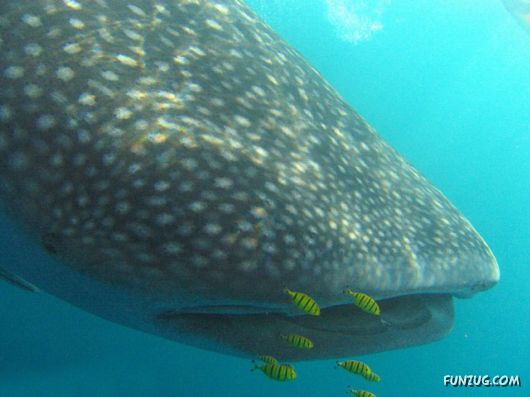 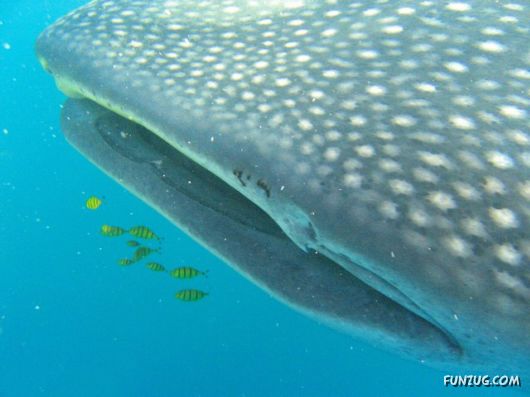 In Mexico, and throughout much of Latin America, the whale shark is known as "pez dama" or "domino" for its patterns of spots. Whales sharks go by the name of "Sapodilla Tom" in Belize due to the regularity of sightings near the Sapodilla Cayes on the Belize Barrier Reef. In Africa, the names for the whale shark are very evocative: "Papa Shillingi" in Kenya came about as it is believed that God threw shillings upon the shark which are now its spots, and in Madagascar whale sharks are known locally as "Marokintana" which means "Many stars". In Indonesia, Javanese also called this species referring to star as "geger lintang" which has meaning "stars in the back". 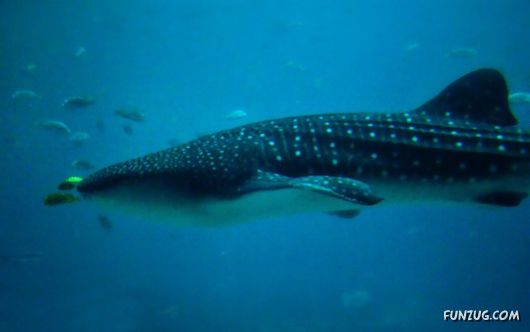 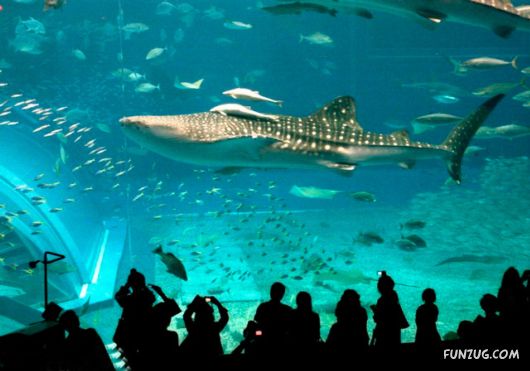 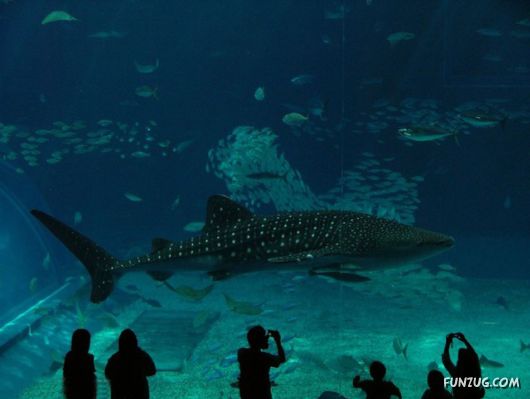 The whale shark is a filter feeder ? one of only three known filter feeding shark species (along with the basking shark and the megamouth shark). It feeds on phytoplankton, macro-algae, plankton, krill and small nektonic life, such as small squid or vertebrates. The many rows of teeth play no role in feeding; in fact, they are reduced in size in the whale shark. Instead, the shark sucks in a mouthful of water, closes its mouth and expels the water through its gills. 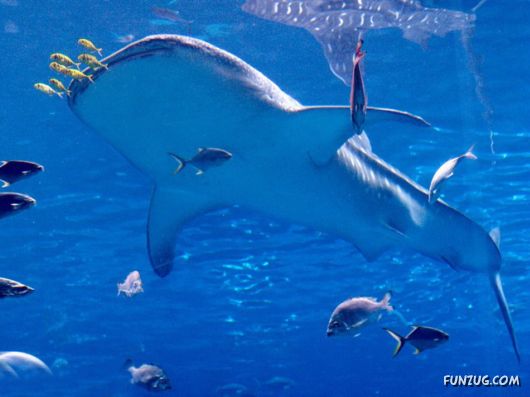 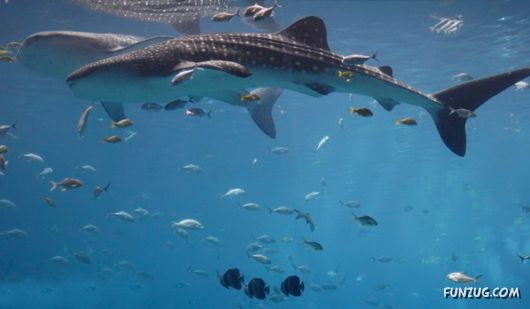 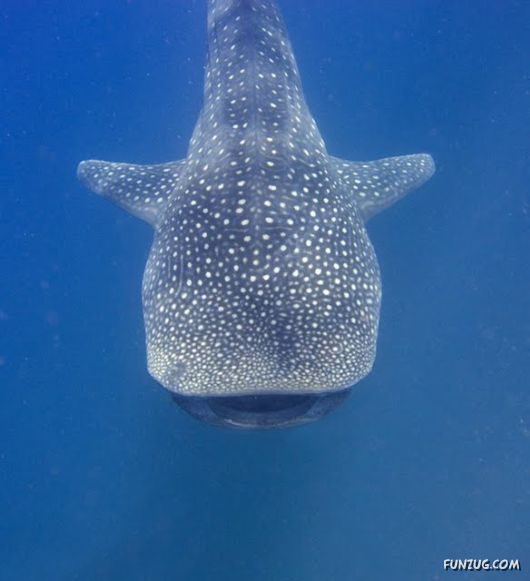 During the slight delay between closing the mouth and opening the gill flaps, plankton is trapped against the dermal denticles which line its gill plates and pharynx. This fine sieve-like apparatus, which is a unique modification of the gill rakers, prevents the passage of anything but fluid out through the gills (anything above 2 to 3 mm in diameter is trapped). Any material caught in the filter between the gill bars is swallowed. Whale sharks have been observed "coughing" and it is presumed that this is a method of clearing a build up of food particles in the gill rakers. 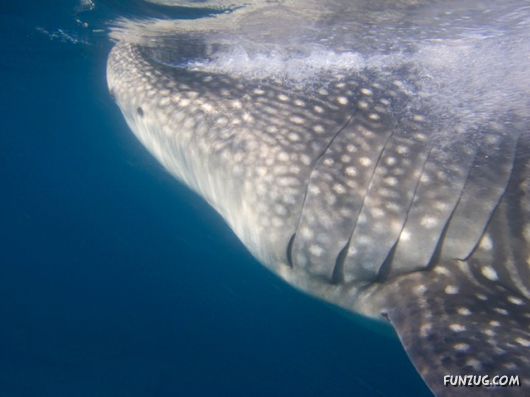 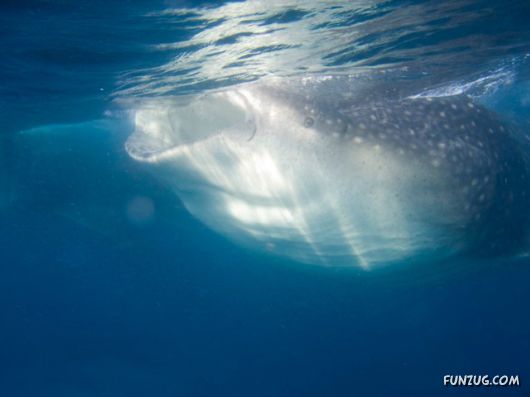 Whale sharks congregate at reefs off the Belizean Caribbean coast, supplementing their ordinary diet by feeding on the spawn of giant cubera snappers, which spawn in these waters between the full and new moons of March through September. 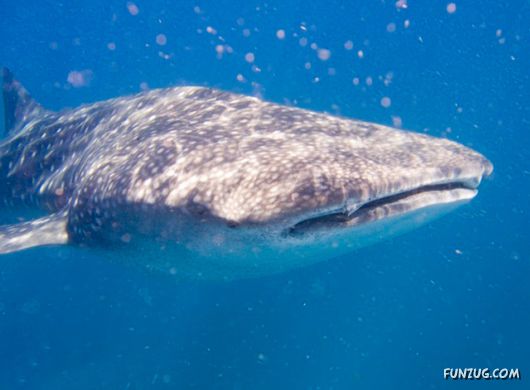 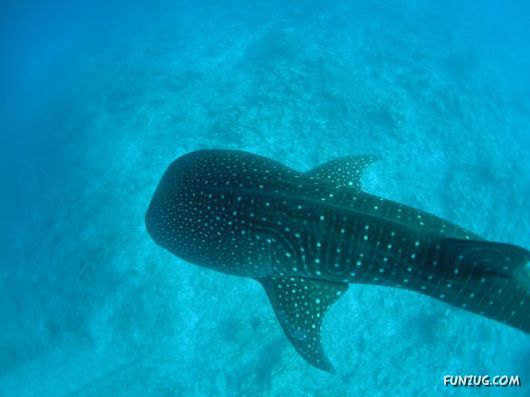 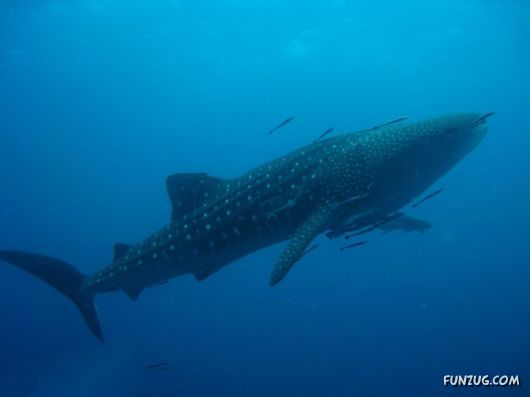