Ranakpur Temples are acclaimed world-wide for their intricate and superb architectural style. These temples form one of the five major pilgrimages of the Jains. Located in village of Ranakpur near Sadri town in the Pali district of Rajasthan, Ranakpur temple lies at a distance of 95 kms in the north of Udaipur city. The temple is easily accessible from the city of Udaipur as regular buses are easily available. Built in the 15th century, Ranakpur temples are known for being the largest and most important temples of the Jain cult.

The temple is said to have been built by Seth Dharna Sah (a Jain businessman) with the aid of Rana Kumbha, who ruled Mewar in the 15th century. Ranakpur got its name after the name of the Rajput Monarch and likewise the temples. The temple complex is positioned in an isolated valley on the western side of the Aravalli Range. The Jain Temples of Ranakpur are certainly creditable for their splendid architecture. This temple is wholly constructed in light colored marble and comprises a basement covering an area of 48000 sq feet. There are more than 1400 exquisitely carved pillars that support the temple. 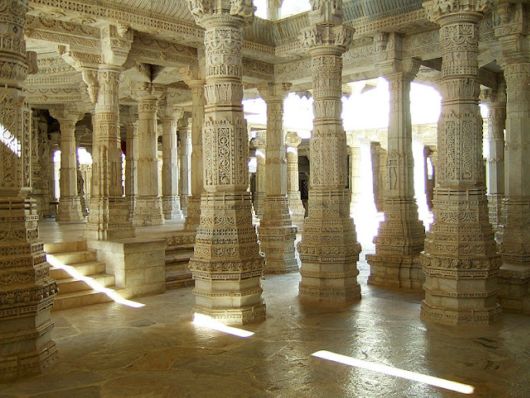 The temple is a masterpiece of architecture and boasts of not less than four additional shrines. It has 24 pillared halls with 80 domes that are supported by 400 columns. The upper and lower parts of the domes are linked by brackets that have deities’ sculptures. Above all, you would be amazed to see at a height of 45 feet engraved nymphs playing the flute in various dance postures. Each column is intricately carved and it is surprising to know that no two columns have the similar design. 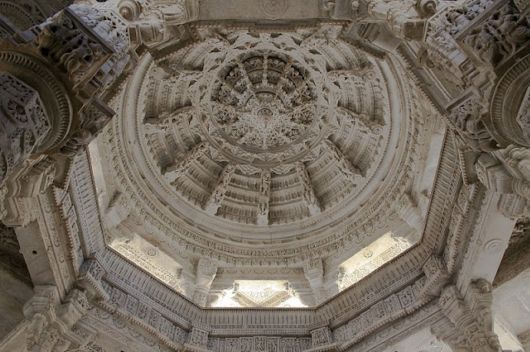 Apart from this, another stunning act about these columns is that they change their color from golden to pale blue after every hour during the day. In the mandap (prayer hall), the two big bells of 108 kg each produce a harmonious sound on the movement. Chaumukha temple is formed like a Nalinigulm Vimana (heavenly aircraft) and provides this whole structure a celestial appearance. Conceivably, it is due to the intricacy of the structure that the temple took approximately 65 years to complete. 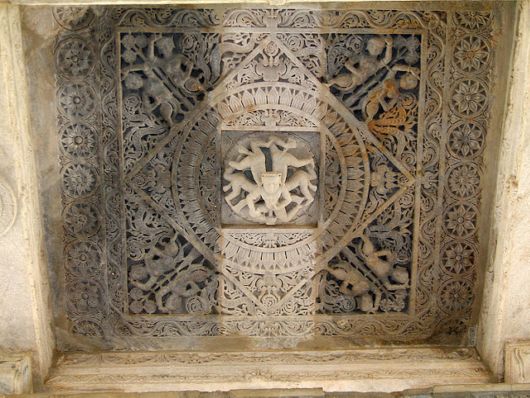 The four faced image also symbolizes the Tirthankara’s quest for the four directions and ultimately the cosmos. The image is surrounded by many small shrines and domes. One more range of cells with separate roofs encircles these shrines and domes all over again. The five spires elevate above the walls and around 20 cupolas rise from roof of the pillared hall. Each spire houses a shrine and the largest shrine is the important one that addresses the central altar. The temple ceilings are festooned with foliate scrollwork and geometric patter 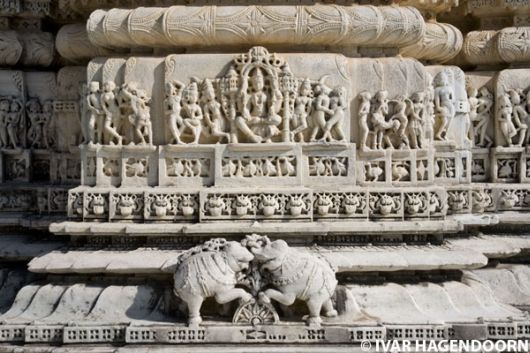 The Temple of Parsavanath is another attraction that is worth visiting. Built in the mid 15th century, the temple is renowned for its engraved windows embellished with Jain figures. Parsavanath Temple is also known as Patriyon Ka Mandir. In close proximity to this temple, you can trace two other temples dedicated to Neminath (22nd saint) and Surya Narayan (Sun God) respectively. Here, Surya Narayan Temple has innumerable wall projections with circular structure. The sight of Lord Surya driven in his chariot of seven horses is truly pleasing.
The dating of this temple is controversial but it is largely considered to be anywhere between the late 14th to mid-15th centuries. Inspired by a dream of a celestial vehicle, Dhanna Shah, a Porwad, is said to have commissioned it, under the patronage of Rana kumbha, then ruler of Mewar. The architect who oversaw the project is said to have been named Deepaka. There is an inscription on a pillar near the main shrine stating that in 1439 Deepaka, an architect, constructed the temple at the direction of Dharanka, a devoted Jain 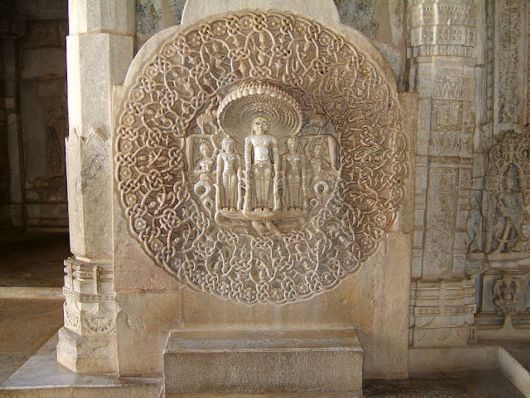 The origins of Jainism can be traced back to the Indus River valley civilization of 3000 B.C. Jains believe that there were 24 great teachers the last of whom was Lord Mahavira who lived during 6th century B.C. These twenty-four teachers are called Tirthankaras-people who had attained all knowledge while living (Moksha) and preached it to the people. Thus, there is not one all-powerful supreme being that controls all. Jains believe in reincarnation. Their souls, which are believed to be a unique substance in the universe, take different living forms in the cycle of birth, death, and rebirth. This cycle has been going on forever, the universe has no beginning or end, it has always been and always will be. The ultimate goal is to get rid of one’s karma on their soul so that they may end this cycle. Once this goal is reached their soul has attained all knowledge and it rests in the heavens forever (Nirvana). Karma theory is about actions and the results they bring to the soul’s path. It is the simply the law of cause and effect with respect to the soul.
E.G. One’s actions for today will effect what will happen to them in this or their future lives. The way to get rid of one’s karma is to follow certain rules of doing good somewhat similar to the ten commandments. These include the principles of: Ahimsa – To protect all life (non-violence) Satya – To speak truth Asteya – To not steal Brahmacharya – To not commit adultery Aparigraha – To limit one’s possessions Jains uphold these principles by practicing vegetarianism, non-violence in thought, deed, and action. Jains perform their sacred rituals at the temple or Derasar. Some of these rituals are: Puja – Concentrating on one’s soul through intense prayer sometimes in the presence of sculptures of the teachers to serve as an example of how to attain Moksha. Samayik – Forty-eight minute ritual that asks for forgiveness for one’s sins Namokar Mantra – A short prayer that can be said at any time that shows obeisance to the perfect souls that have achieved Nirvana. The biggest event in the Jain calendar is the holy week (8-10 days) of Paryushan where Jains reflect upon their actions throughout the past year. The week takes place in August or September and is concluded by a three hour prayer called Pratikraman. 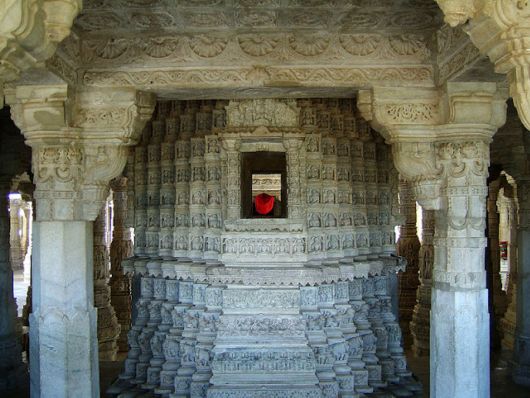 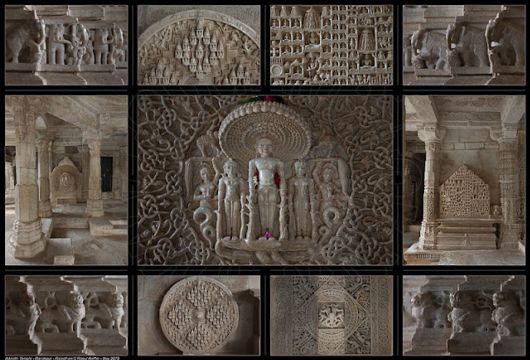 The ultimate power of a Mantra uttered in words and meter depends on the one who recites it, his feelings at the time and the place where it is recites. However, the Namokar Mantra while it controls our behaviour pattern and destroys our sins (Karmanashak), upon being recited increases our inner spiritual strength. It releases us from crisis, and it generates our well-being. Jain scriptures tell of its endless magical manifestation: A dog who was about to die, heard the Mantra recited by Jeevandhar and became a handsome Yaksha. A pair of serpents heard the Mantra recited by Parshva Kumar and metamorphosed into Darnendra and Padmavati. A bull while in physical agony, heard the Mantra recited by Seth Padmaruchi and in his next life became Prince Vrishabhdhvaj – the same prince was known as Sugriva later on. The nobleman Dhananjai’s son dying from snakebite heard the Mantra and regained life. Anjan the thief running from sure death learnt this Mantra and became a learned man. Aj while dying patiently heard the Mantra recited by Charudutt and reached heaven. There are endless legends about the power of this Mantra. The one who recites this sure Mantra with real faith, scales the heights of the everlasting pits of hell. In this context it would be well to recall Suhom Chakravarti’s fate.
May we all learn from the teachings and beliefs of Jainism and make our souls pure and sacred so that it is ready to become one with God. 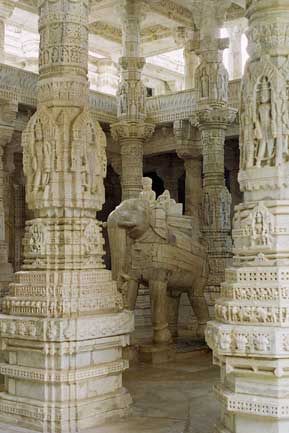 In the complex, there are several temples including Chaumukha temple, Parsavanath temple, Amba Mata Temple and Surya Temple. Amongst all of them, Chaumukha Temple is the most important and as the term Chaumukha suggests, this temple is four-faced. Chaumukha temple is dedicated to Lord Adinath, who is the first ‘Tirthankara’ of the Jains. The Temple structure is highly compound having four different doorways to get into the chambers. These chambers ultimately take you to the main hall where the image of Adinath is positioned.