Cramped cubicle culture is not unfamiliar to many office-dwellers, as most of us spend our adult years feeling like rats being held in a badly lit corporate cage. Not all workspaces are created equal, though. In fact, some of the following cubicles and office spaces are the stuff dreams are made of. Here are some of the coolest workspaces that foster productivity and likely make water cooler discussions a little less "I can’t believe I have to work here" and more "I can’t believe I get to work here!" 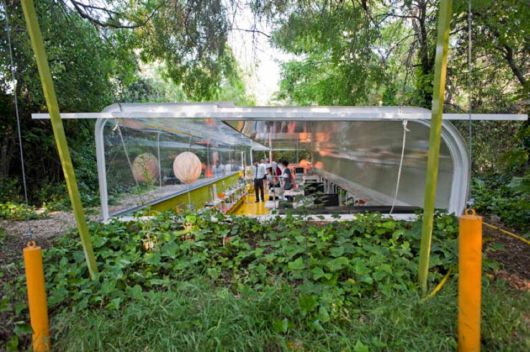 Imagine working for the Madrid-based architectural firm Selgas Cano, filing documents under the trees and alongside the sunshine, with the serenity of nature all around you. Jose Selgas and Lucia Cano designed the ultimate office for their business using plexiglass, fiberglass and polyester-based materials. Work doesn’t have to separate you from nature; rather, nature and natural lighting work to enhance your professional experience. 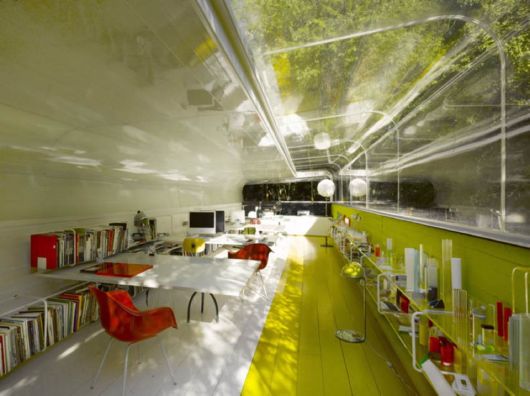 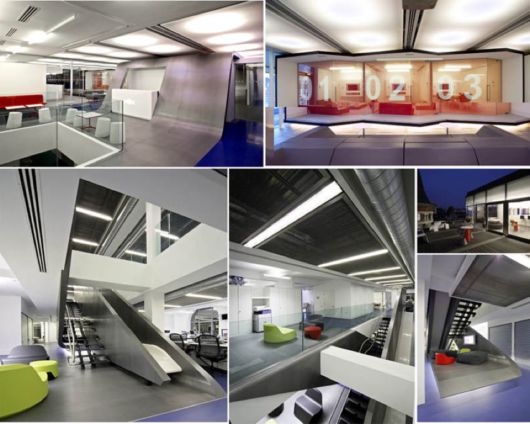 Jump Studio’s vibrant take on the RedBull Headquarters in London was inspired by the energy drink itself, intending to stimulate and energize the headquarters’ employees and visitors alike. It boasts three levels, a rooftop extension, a floating staircase, a slide, and ? well, what else do you need? There’s a SLIDE! 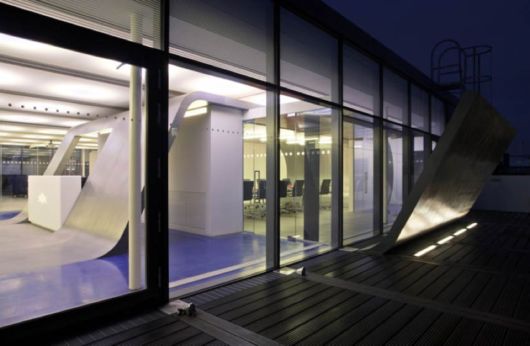 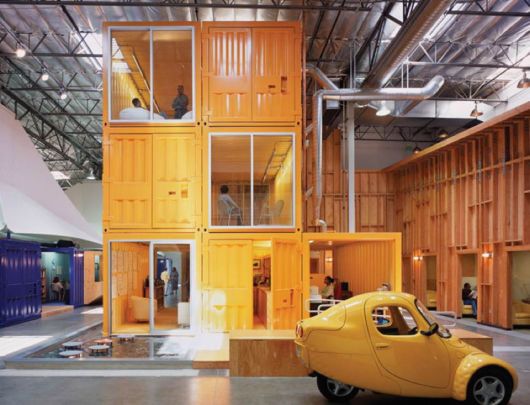 The sky is the limit with these individual shipping container cubicles at Pallotta Teamworks in Los Angeles. The company figured this was the best way to provide individual, private workstations with their two-million dollar budget, which when you’re talking about a 47,000 square foot warehouse, equals out to $40 per square foot ? or half the typical amount for this kind of project. With the use of tented "neighborhoods" to streamline cooling costs, among other outside-the-box- ideas, this company has fulfilled their mantra of creative and sustainable work solution 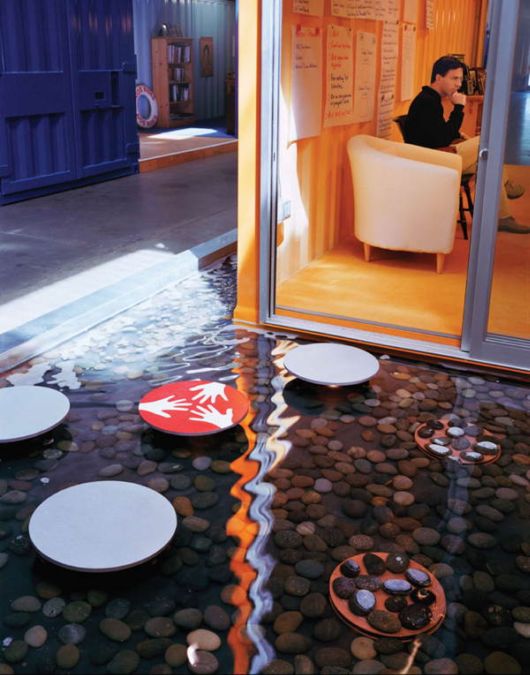 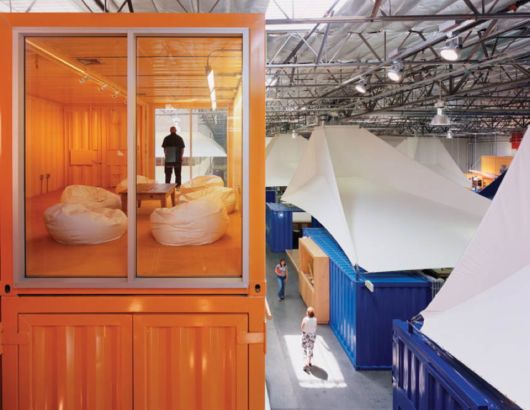 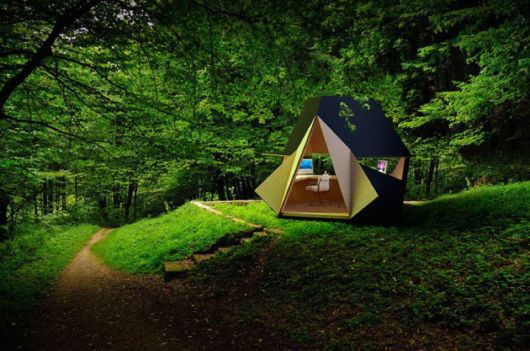 Stepping away from the industrial vibe of the standard high-tech office, these "pop-up cubicles" fit two people and two desks. Given their versatile nature, you can put them pretty much anywhere, so why not in the middle of the forest? Designed by David Ajasa-Adekunle for Innovation Imperative, these are reasonably priced due to the modern materials used and practical construction 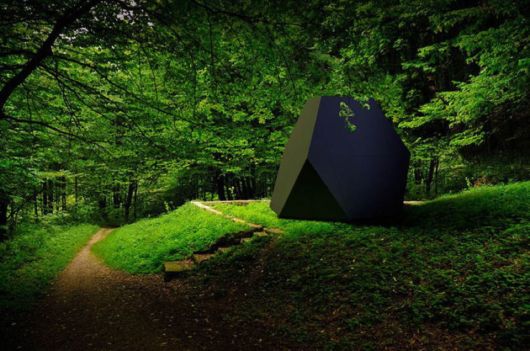 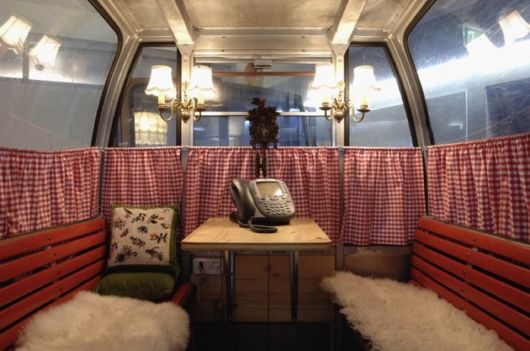 A tastemaker in all that is cool and well designed, it’s easy to anticipate a Google nod in a list like this. Located in Zurich, these Google offices are perfect space to take a conference call during lunch. The Zooglers?what Google employees in Zurich are called?want a "personal workspace [that was] functional, and more neutral, communal areas had to offer strong visual?qualities to stimulate creativity, innovation and collaboration". And from the looks of it, that’s just what they received. 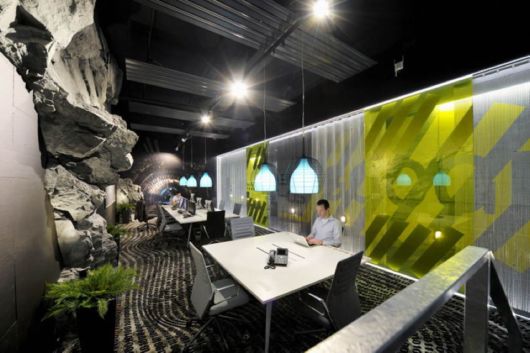 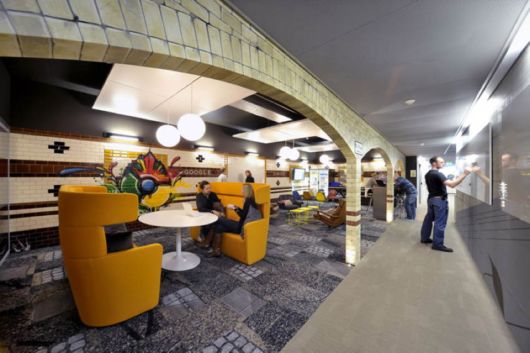 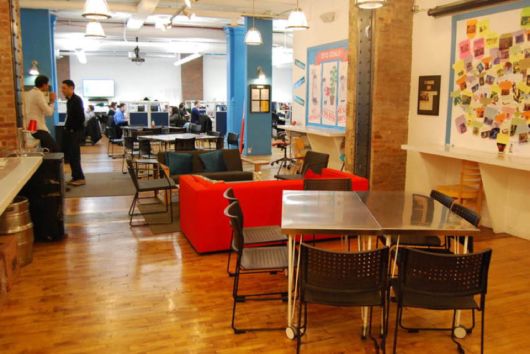 Here is the Google known to all; simultaneously high tech and chilled out, but with a definite New York vibe. Designed to promote ‘casual collision’ among workers that might not normally talk to each other, groups of employees rotate around and are encouraged to meet others and have conversations. The floor plan facilitates this well; since the complex occupies a full city block- and is home to 3,000 employees- many people choose scooters as a mode of transportation from one space to the next. This particular group of offices is much like snowflakes? no two Google office complexes look alike. If you want to successfully kill an entire weekend, Google "Google offices". 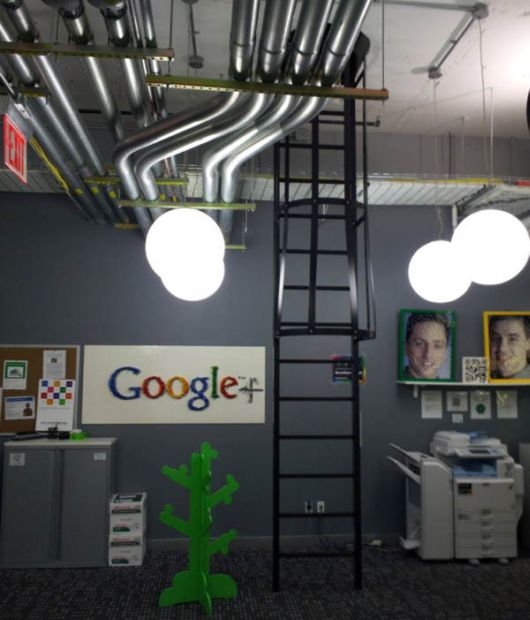 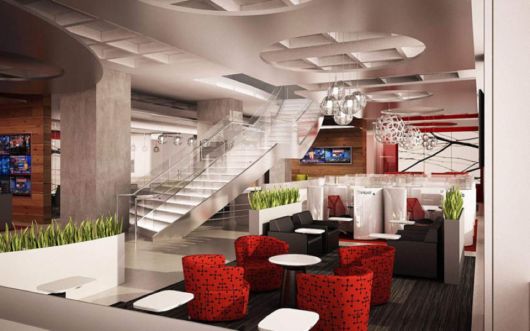 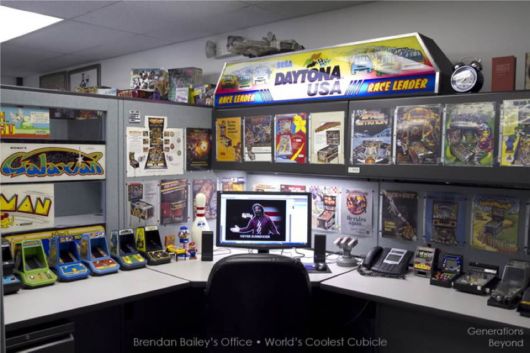 Even if you can’t escape cubicle life, you can make the best of your own space. Somewhere in Middle Island, NY, video-game enthusiast Brendan Bailey has made himself a workspace that looks more like an arcade museum than some place to make spreadsheets. You even have to search pretty hard to find his phone. See more of his fantastic office here. 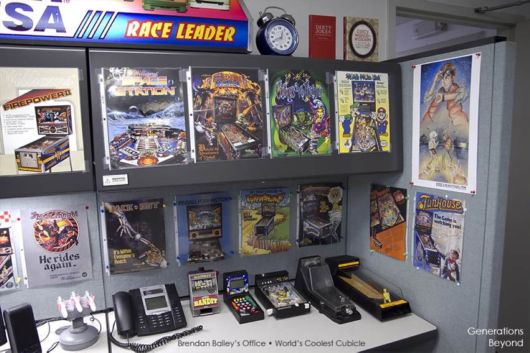 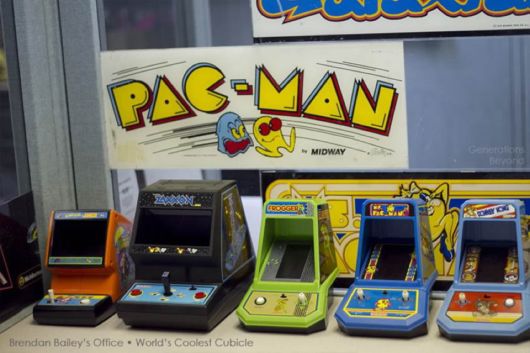 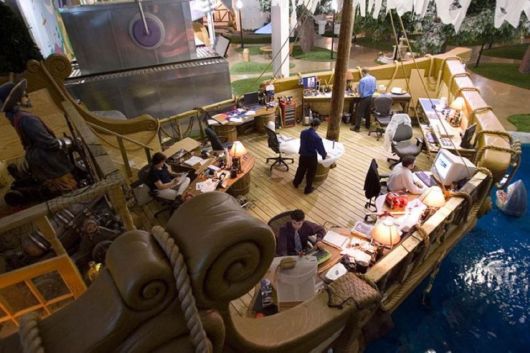 Pittsburgh, Pennsylvania is home to Inventionland, a 61,000 square-foot wonderland that’s possibly the most eccentric office of the bunch. Here, employees tackle what would otherwise be mundane desk work on either a giant pirate ship, inside a treehouse, or inside what looks to be a giant Hot-Wheels racetrack. For added creative spark, there are also three running waterfalls and lifelike trees, birds, and butterflies. Inventionland calls itself "America’s largest invention factory", proving that innovation is still alive and well, and supplying product ideas and prototypes to thousands of companies daily. 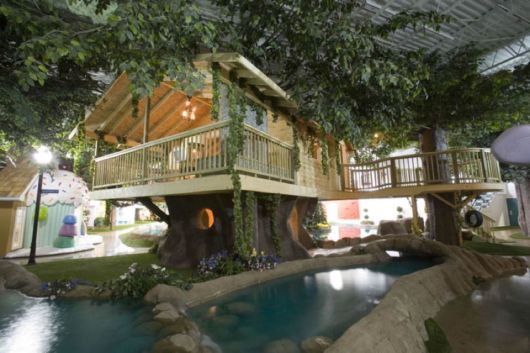 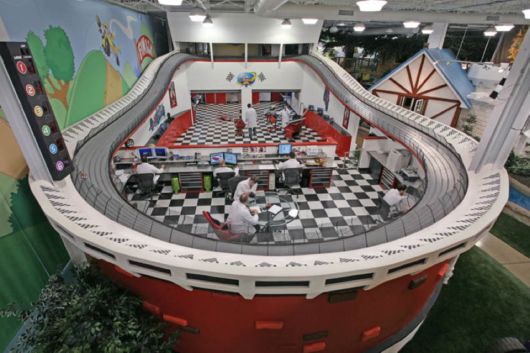 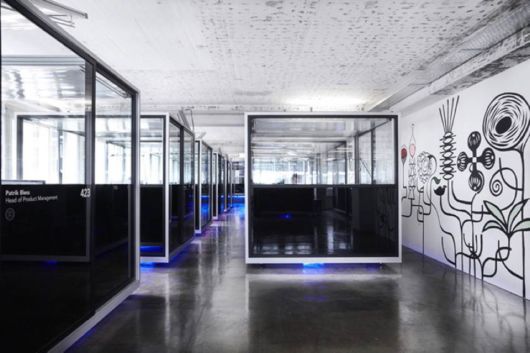 Ambience abounds in the minimalist and modern office of Open Systems, designed by Meury Architektur of Switzerland. This integrated service management company is decked out with "a series of identical pods" which for whatever reason (maybe a lack of corners) sounds like much more fun than cubicles. Each of the floor-to-ceiling window walls can be folded down and removed altogether to garner extra office space. 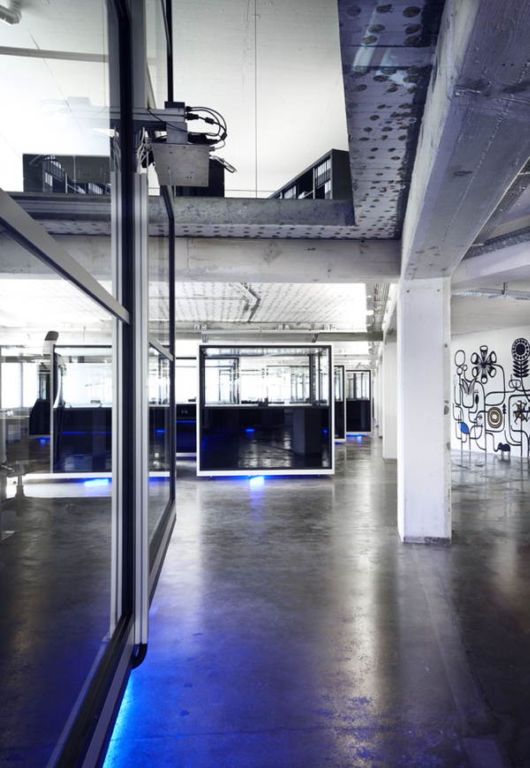 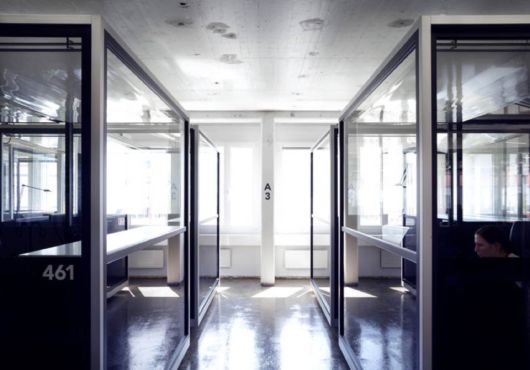