The Namaste tower! Designed by the Atkins design studio, work IS currently underway on this 300m-62 storeyed mixed use tower that will encompass a hotel, office and retail space.
The location is Ambika mills which is a couple hundred meters south of the The developer of the project is unknown.

The renders and text were submitted by Atkins to the World Architecture Festival in Barcelona (3-5 Nov 2010). 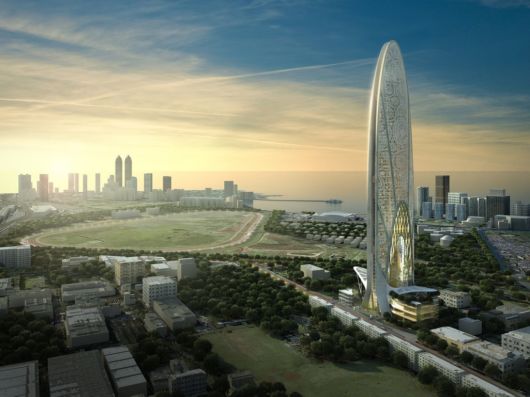 Following the long tradition of great Indian Architecture it was our aim that the Namaste Tower will stand as a landmark structure, representative of the burgeoning economic and cultural significance of India. We aimed to design a building that would become representative of the city: the picture postcard of Mumbai. 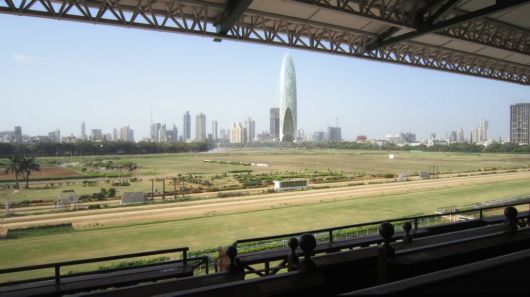 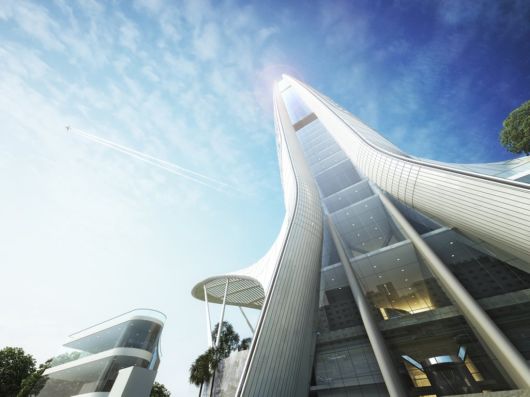 The traditional Indian greeting of ?Namaste?, where the hands are clasped together in greeting, is the inspiration for the design of this tower. In Sanskrit ?Namaste` means ?I bow to you`. It has a spiritual significance of negating one?s ego in the presence of another.

The Architecture of the Namaste Hotel builds on this ancient Indian expression. The two wings of the hotel are clasped together like hands greeting the city of Mumbai. In this way the architectural design of the hotel provides the ultimate symbol of hospitality and welcome, as seen in the as seen in the cultural context of India. 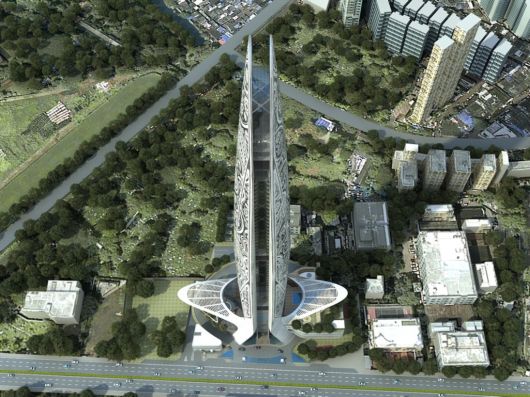 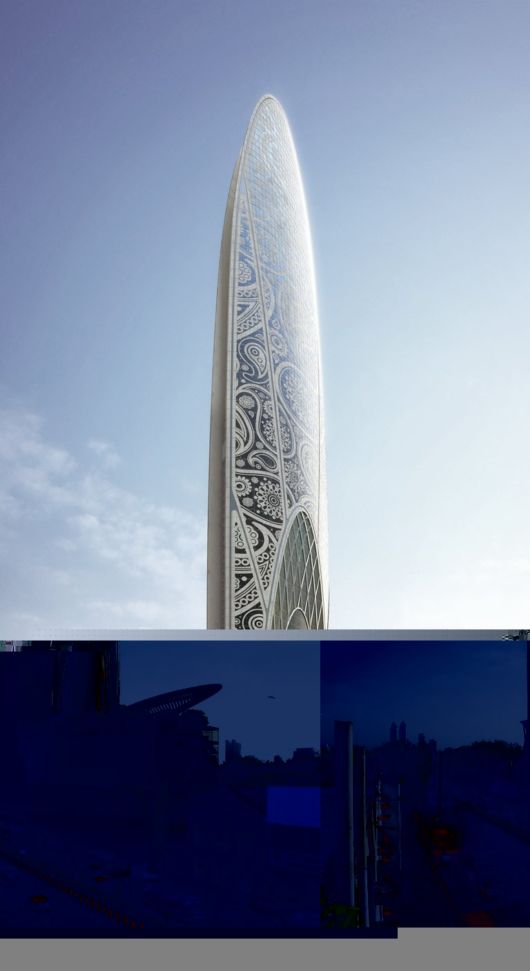 Visual Relationships to and from the Site

With a proposed height of 300 m the tower will be seen from a distance of more than 40 km. Therefore the visual appearance of the project as a major landmark is of great importance to the city of Mumbai.

Views from the tower will extend to the South over the Mahalkshi Race course towards the Mumbai Peninsula and to the South West over the Indian Ocean. The views to the north East are towards a number of adjacent towers that are currently being constructed. The orientation and massing of the tower have been designed in order to make the very best of these visual relationships. 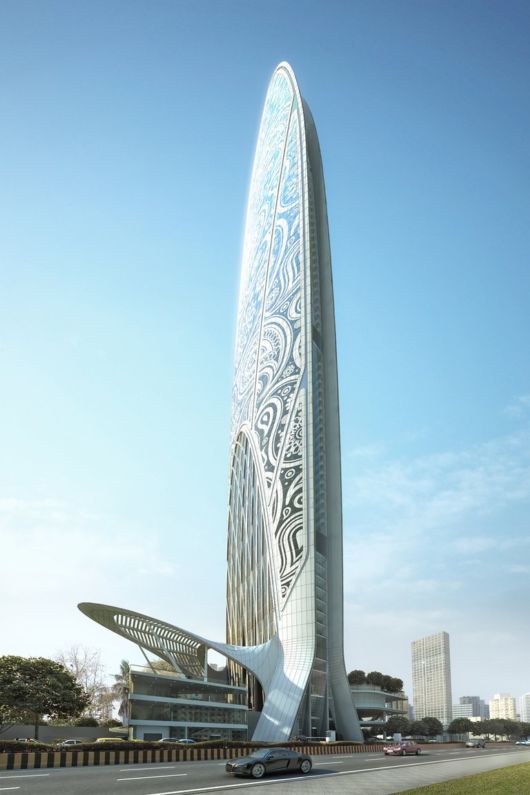 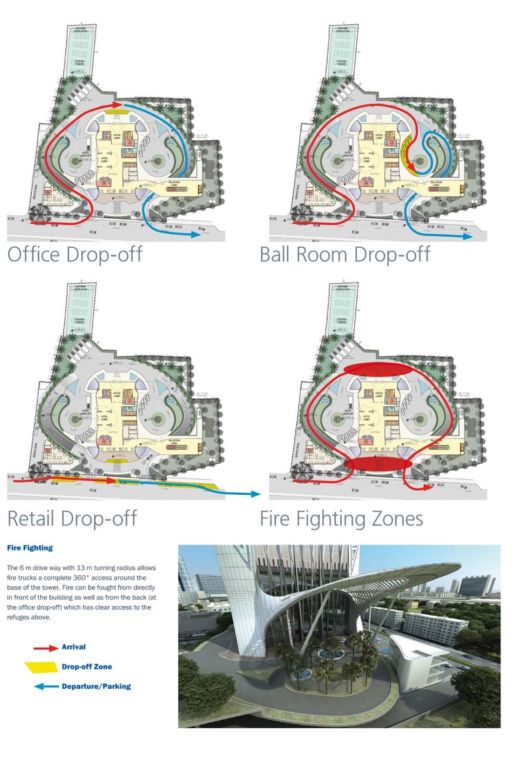 The tower has been designed to cater for large scale Indian weddings. The occasion of a Mehndi ceremony (where the hands and feet of the bride and groom are decorated with henna) is often one of the most important pre-wedding rituals in India.

The design seeks to build on the theme of the clasped hands by referencing the intricate Mehndi patterns through the treatment of the building skin. The tower is will be clad in fritted glazing that combines to form an architectural scale graphic on the exterior of the building. This will create a sense of transparency and depth to the building while at the same time helping to maintain the thermal qualities required to meet the building?s envelope design criteria.

It is proposed that the large scale canopies over the drop-off points area support an array of solar thermal collectors. Given the available surface area and annual sunlight conditions these have the potential to provide 12% of the energy required to heat the hot water for the hotel. 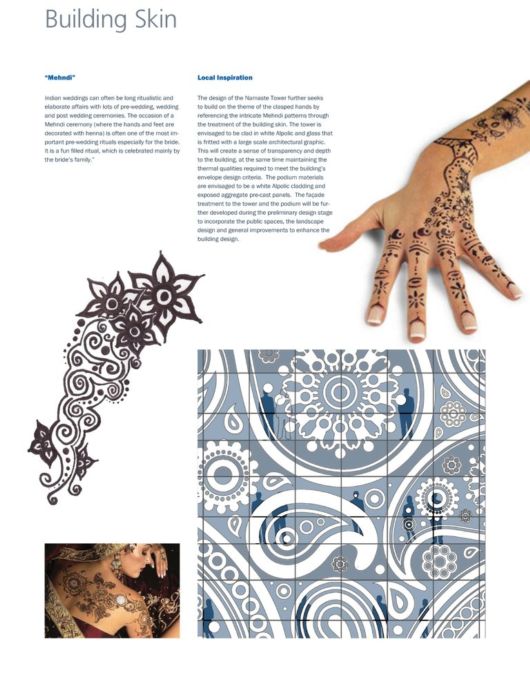 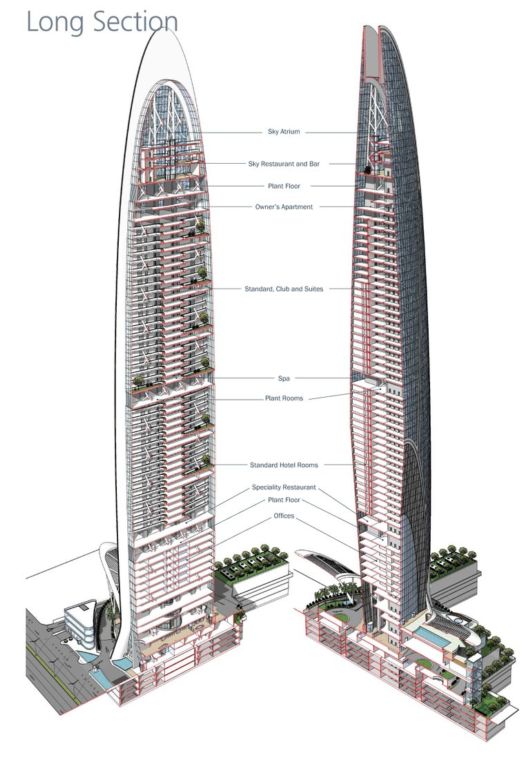 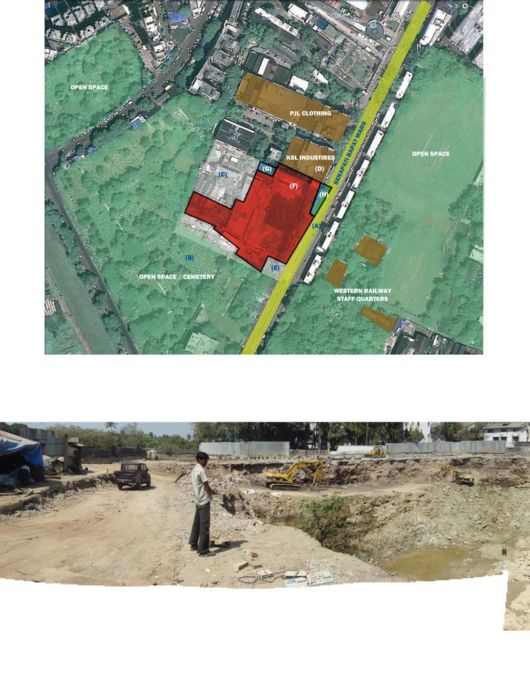 The tower is made up of two separate wings (or hands) which together form the architectural expression of ?Namaste?. The space between the wings forms the corridor spaces. At either end of the corridor space a pair of open atria will offer hotel guests dramatic framed views out over the city. 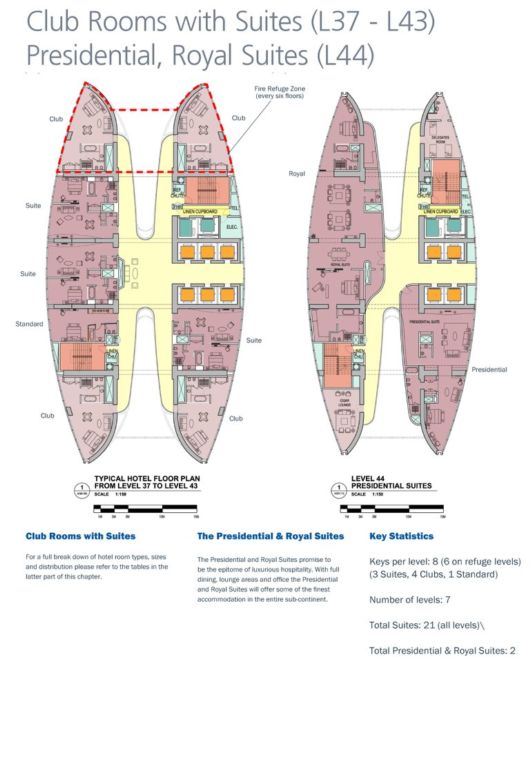 These atria also serve to bring natural light deep into the plan. At the plant floor levels these atria are broken with internal gardens that serve to bring greenery into the corridor and atrium spaces. It was a central design aim to ensure that the circulation areas of the hotel, (including corridors) are just as impressive as the rooms themselves. 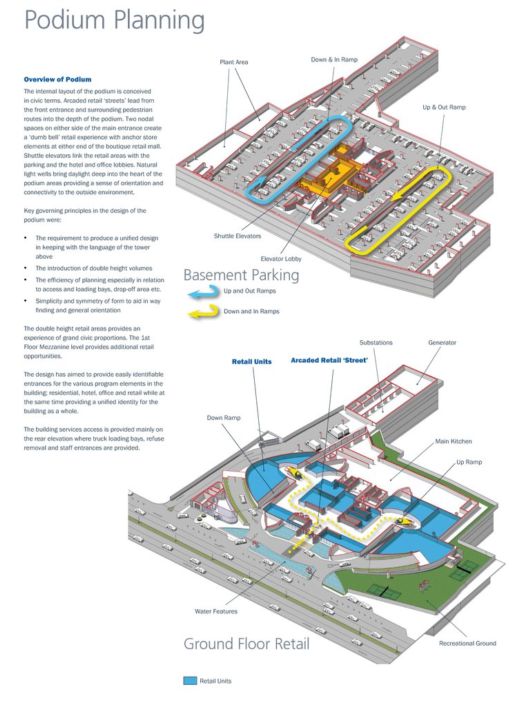 The geometry of the podium is designed to integrate fully with the design of the tower. Thus it is a highly symmetrical form that responds to the wing like canopies above the drop off. Containing mostly retail, the facade of the podium is activated with water features and fountains that cascade down to street level. 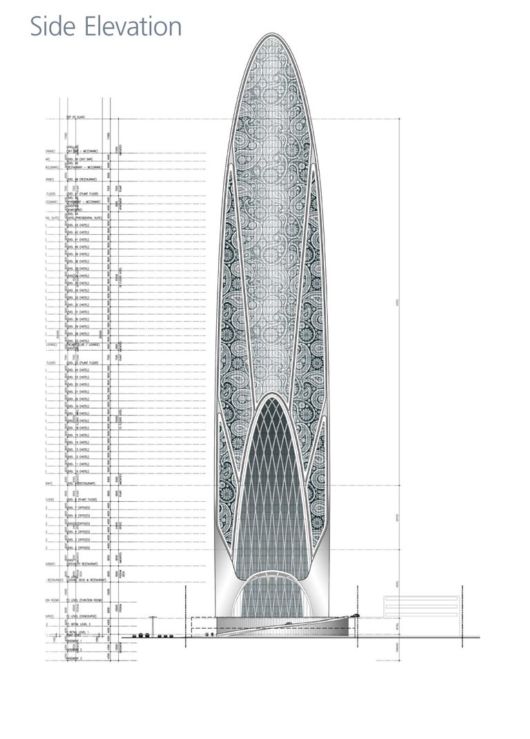 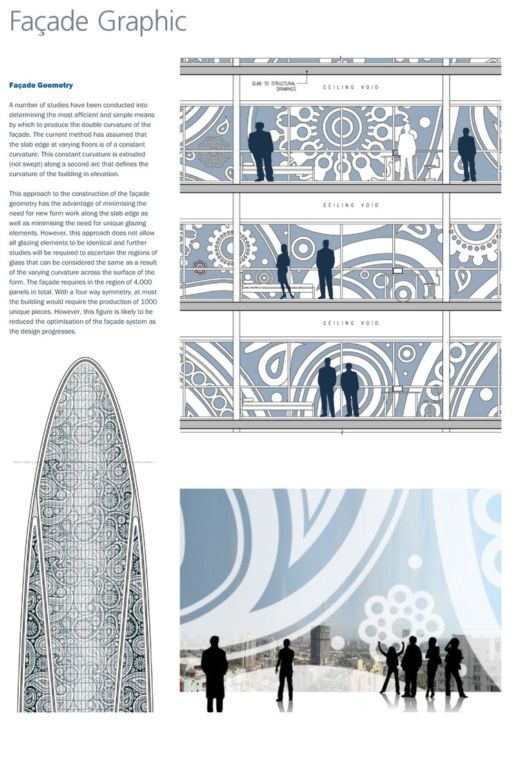 At the summit of the building a generous quadruple height atrium space encloses a Sky Restaurant and Bar which will provide a unique vantage point for patrons to gain panoramic views out over the city. 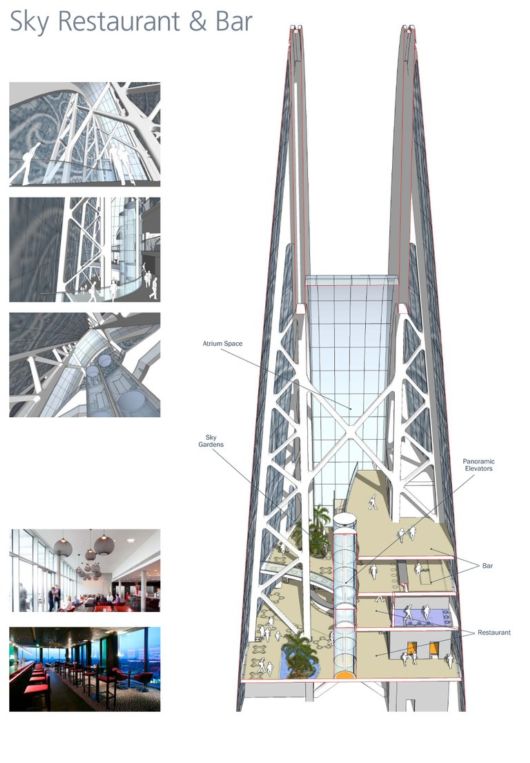 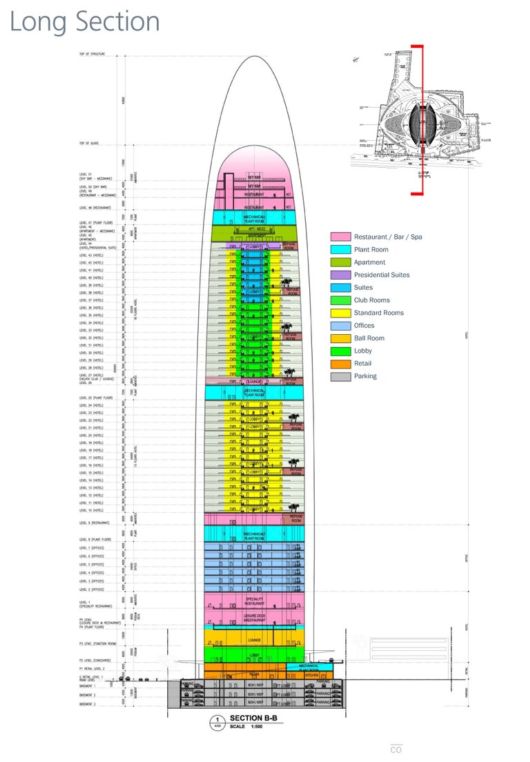