All of the stadiums will harness the power of the suns rays to provide a cool environment for players and fans by converting solar energy into electricity that will then be used to cool both fans and players. When games are not taking place, the solar installations at the stadiums will export energy onto the power grid. During matches, the stadiums will draw energy from the grid. This is the basis for the stadiums? carbon-neutrality.

The upper tiers will be sent to developing nations, which often lack sufficient football infrastructure. We see sending the stadiums to developing nations as an integral part of our bid, as doing so will allow for the further development of football on the global stage. Along with the stadiums, we plan to make the cooling technologies we have developed available to other countries in hot climates, so that they too can host major sporting events. 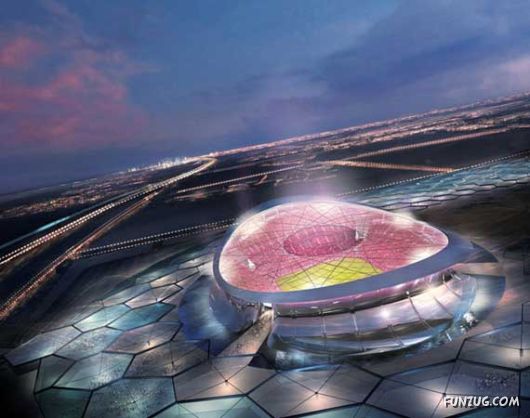 The new Lusail Iconic Stadium, with a capacity of 86,250, will host the opening and final matches of the 2022 FIFA World Cup? if Qatar is granted hosting rights. Located in Lusail City , the stadium takes its inspiration from the sail of a traditional dhow boat and is surrounded by water. After the FIFA World Cup?, the stadium will be used to host other spectacular sporting and cultural events. 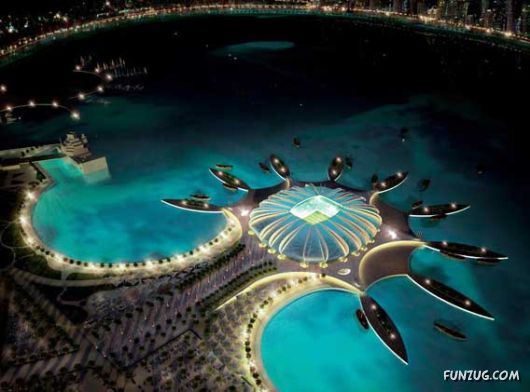 The new Doha Port Stadium will be a completely modular stadium with 44,950 seats. The stadium, which will sit on an artificial peninsula in the Gulf, is designed to evoke its marine setting. Water from the Gulf will run over its outer facade, aiding in the cooling process and adding to its visual allure. Fans will have the option of arriving on a water taxi or ferry. After the FIFA World Cup?, the whole stadium will be disassembled and the seats sent to developing countries to further their football development. 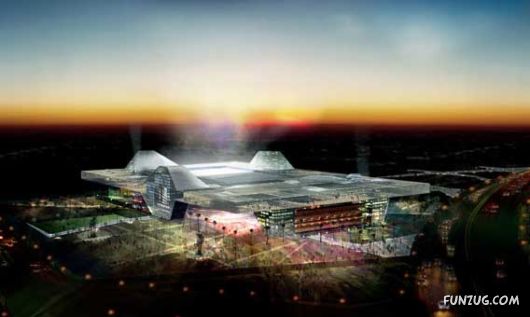 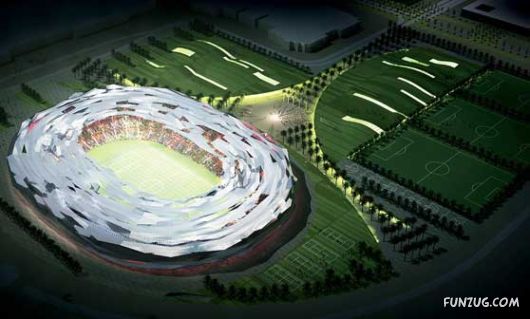 Education City Stadium takes the form of a jagged diamond, glittering by day and glowing by night. The 45,350-seat stadium will be located in the midst of several university campuses at Education City , easily accessible for fans both in Qatar and in neighbouring Bahrain , which will be only 51 minutes away from the stadium by high-speed rail. Following the FIFA World Cup?, the stadium will retain 25,000 seats for use by university athletic teams. 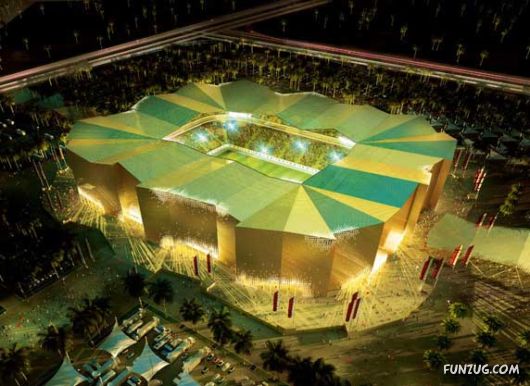 Umm Slal Stadium, located in the vicinity of one of Qatar ‘s most historically important forts, will have 45,120 seats. The design is a modern interpretation of traditional Arab forts, like the one in nearby Umm Slal Mohammed. After the FIFA World Cup?, seating capacity will be reduced to 25,500. The stadium will be used by Umm Slal F.C. 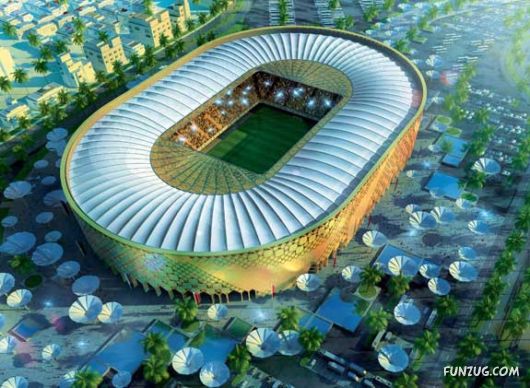 Replacing an existing track and field stadium on Qatar University ‘s campus, Qatar University Stadium will have 43,520 seats. The stadiums gold facade blends traditional Arabic geometric patterns with free-form open surfaces, conjuring both past and future. The stadium will be used by student athletes following the FIFA World Cup?, with a seating capacity of 23,500. 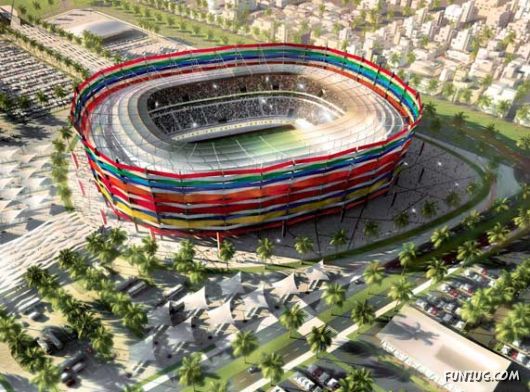 The existing 21,175 capacity Al-Gharafa stadium will be expanded to 44,740 seats using modular elements forming an upper tier. The facade will be made up of ribbons representing the nations that qualify for the 2022 FIFA World Cup and will symbolize football and the mutual friendship, tolerance and respect that the tournament represents. The stadium will be downscaled to its existing capacity after the tournament ends. 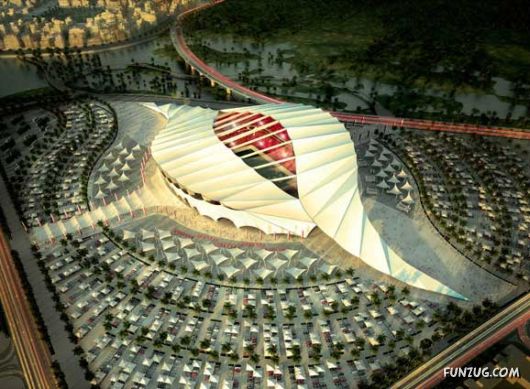 Al-Khor is a brand new 45,330-capacity stadium with a stunning seashell motif and a flexible roof. The permanent lower tier seats 25,500 and the modular upper tier seats 19,830. The stadium offers spectators a stunning view of the Arabian Gulf from their seats and will be located in a sports and recreation zone. 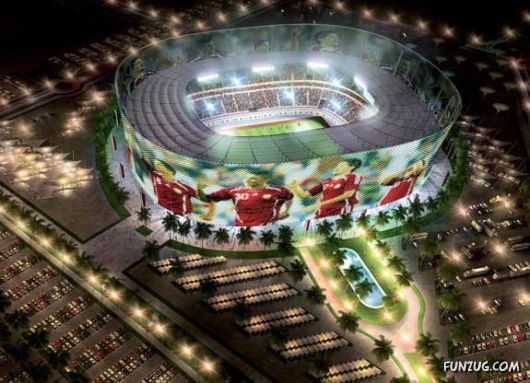 The existing Al-Rayyan Stadium with a seating capacity of 21,282 will be expanded to 44,740 seats using modular elements to form an upper tier. The stadium is designed with a special "media membrane" facade that acts as a screen for projecting news, updates and current matches. The stadium will be downsized to its current capacity after the tournament. 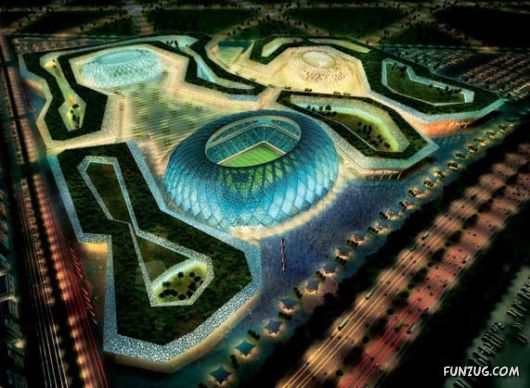 Al-Wakrah is one of Qatar ‘s oldest cities, with a long history of commercial fishing and pearl diving. Al-Wakrah stadium, with a capacity of 45,120, takes its cues from the sea that has played such an important role in the city’s history. After the FIFA World Cup?, the stadium’s capacity will be reduced to 25,500 seats. 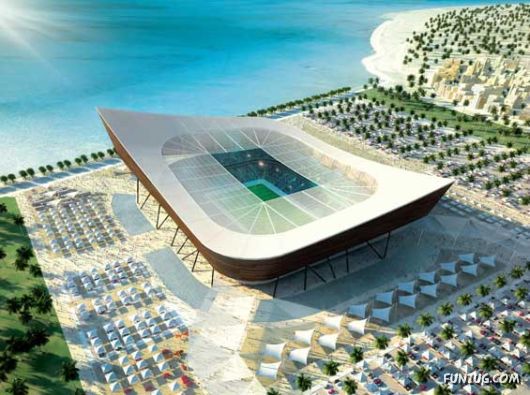 Al-Shamal stadium will have a capacity of 45,120, with a permanent lower tier of 25,500 seats and a modular upper tier of 19,620 seats. The stadiums shape is derived from the "dhow" fishing boat used in the Gulf. Spectators are expected to arrive from the Doha Expressway, water taxis, the Bahrain-Qatar Friendship Bridge and the new metrorail. 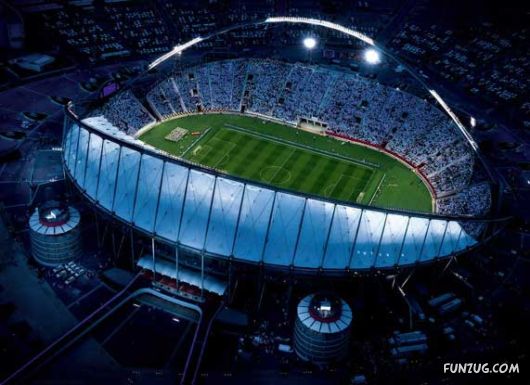 Redesigned for Qatar ‘s successful hosting of the 2006 Asian Games, Khalifa International Stadium’s current capacity of 50,000 will be expanded to 68,030 for the 2022 FIFA World Cup?. The stadium, which includes sweeping arcs and partially covered stands, is the centerpiece of Aspire Zone, a sports complex that includes the Aspire Academy for Sports Excellence, ASPETAR Sports Medicine Hospital and many other sporting venues.