The Aqueduct of Segovia is a Roman aqueduct and one of the most significant and best-preserved ancient monuments left on the Iberian Peninsula. It is located in Spain and is the foremost symbol of Segovia, as evidenced by its presence on the city’s coat of arms.

History ? As the aqueduct lacks a legible inscription (one was apparently located in the structure’s attic, or top portion), the date of construction cannot be definitively determined. Researchers have placed it between the second half of the 1st Century AD and the early years of the 2nd Century?during the reign of either Emperor Vespasian or Nerva. The beginnings of Segovia itself are likewise not definitively known. The people called Vaccaei are known to have populated the place or area before the Romans conquered the city. Roman troops sent to control the area stayed behind to settle there. The area fell within the jurisdiction of the Roman provincial court (Latin conventus iuridici, Spanish convento jurídico) located in Clunia. 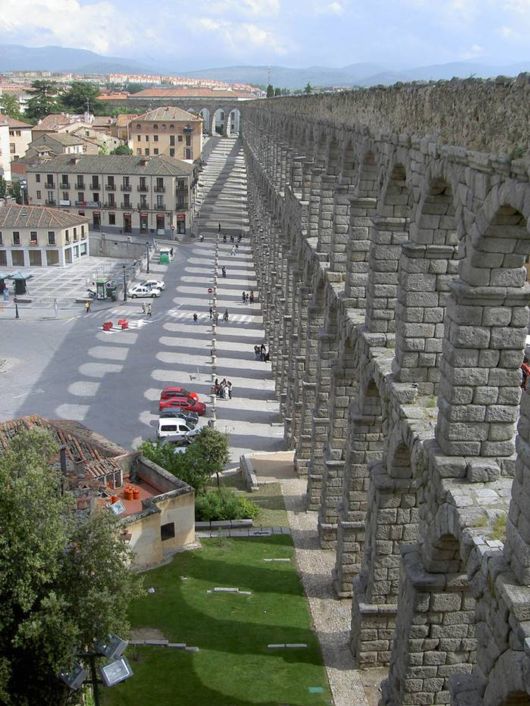 Description ? The aqueduct transports waters from Fuente Fría river, situated in the nearby mountains, some 17 km (11 mi) from the city in a region known as La Acebeda. It runs another 15 km (9.3 mi) before arriving in the city. The water is first gathered in a tank known as El Caserón (or Big House), and is then led through a channel to a second tower known as the Casa de Aguas (or Waterhouse). There it is naturally decanted and sand settles out before the water continues its route. Next the water travels 728 m (796 yd) on a one-percent grade until it is high upon the Postigo, a rocky outcropping on which the old city center, the Segovia Alcázar, was built. Then, at Plaza de Díaz Sanz (Díaz Sanz Square), the structure makes an abrupt turn and heads toward Plaza Azoguejo (Azoguejo Square). It is there the monument begins to display its full splendor. At its tallest, the aqueduct reaches a height of 28.5 m (93 ft 6 in), including nearly 6 m (19 ft 8 in) of foundation. There are both single and double arches supported by pillars. From the point the aqueduct enters the city until it reaches Plaza de Díaz Sanz, it includes 75 single arches and 44 double arches (or 88 arches when counted individually), followed by four single arches, totalling 166 arches in all. 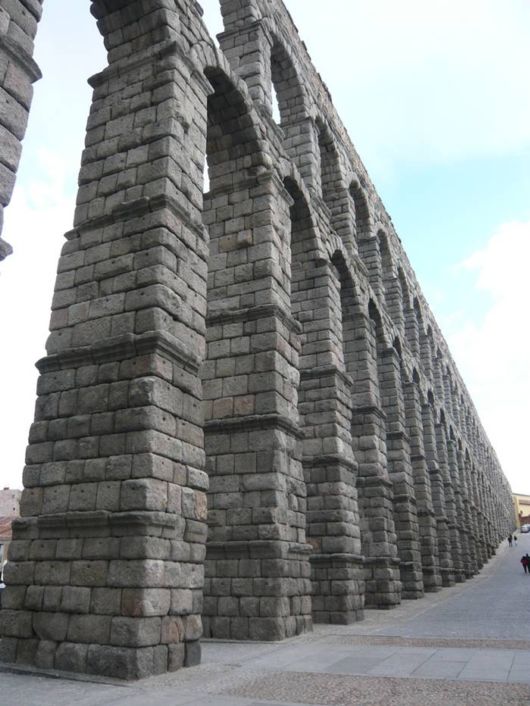 The construction of the aqueduct follows the principles laid out by Vitruvius as he describes in his De Architectura published in the mid-first century.

Construction ? The first section of the aqueduct contains 36 semi-circular arches, rebuilt in the 15th century to restore a portion destroyed by the Moors in 1072. The line of arches is organized in two levels, decorated simply, in which predominantly simple moulds hold the frame and provide support to the structure. On the upper level, the arches have a total width of 5.1 meters (16.1 ft). Built in two levels, the top pillars are both shorter and narrower than those on the lower level. The top of the structure contains the channel through which water travels, through a U-shaped hollow measuring 0.55 by 0.46 in circumference size. The top of each pillar has a cross-section measuring 1.8 by 2.5 meters (5.9 by 8.2 feet), while the base cross-section measures approximately 2.4 by 3 meters (7.9 by 9.8 feet).

Principal facade of the Aqueduct of Segovia. The aqueduct is built of unmortared, brick-like granite blocks. During the Roman era, each of the three tallest arches displayed a sign in bronze letters, indicating the name of its builder along with the date of construction. Today, two niches are still visible, one on each side of the aqueduct. One of them is known to have held the image of Hercules, who according to legend was founder of the city. The other niche now contains the images of the Virgen de la Fuencisla (the Patroness of Segovia) and Saint Stephen. 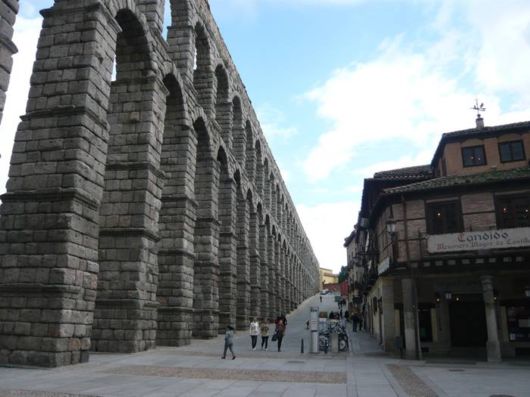 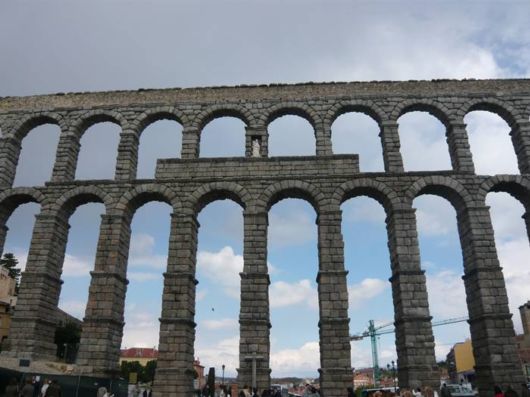 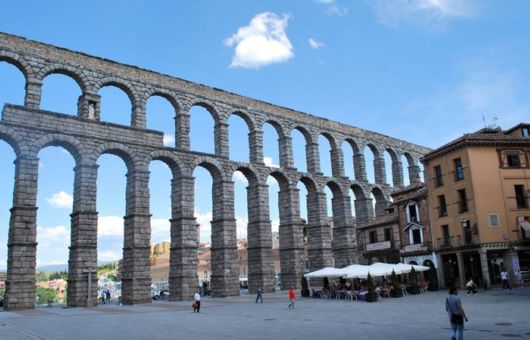 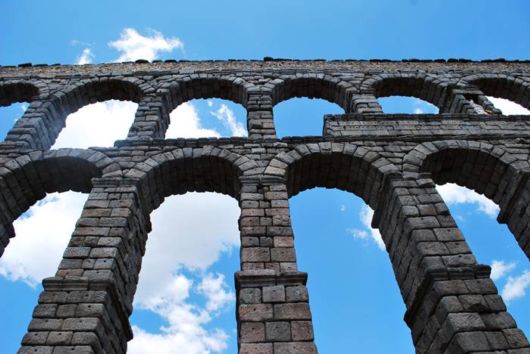 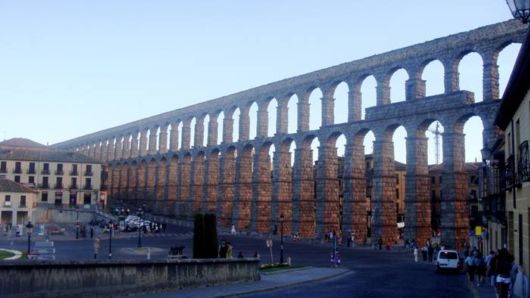 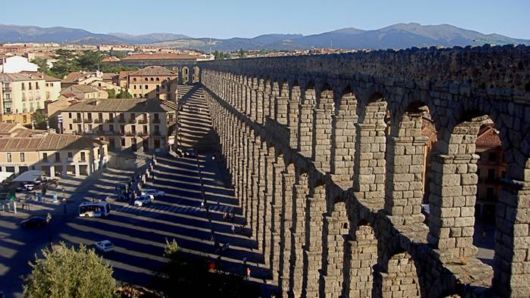 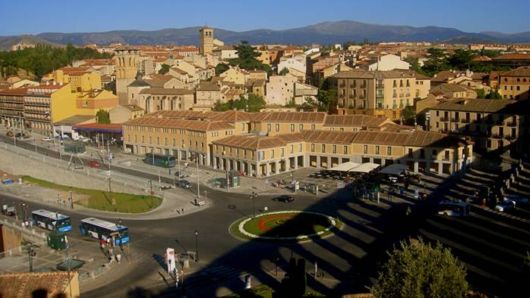 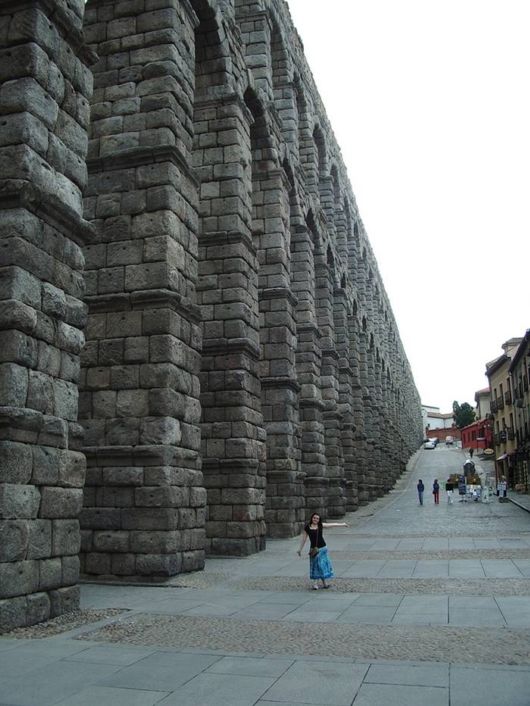 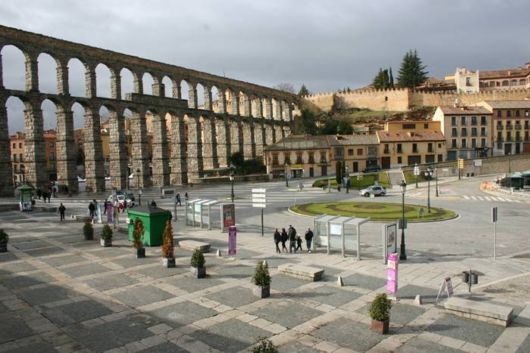 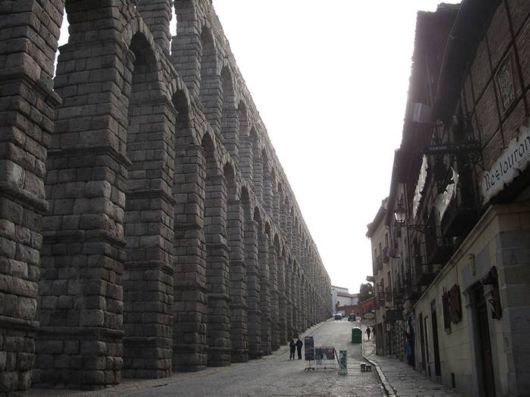 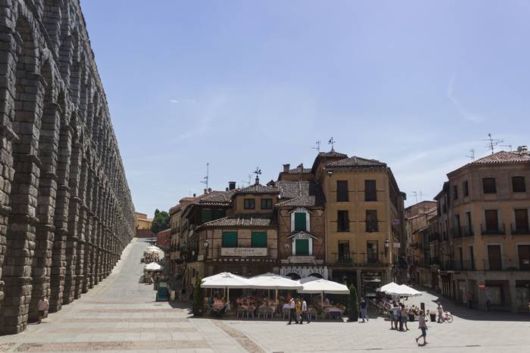 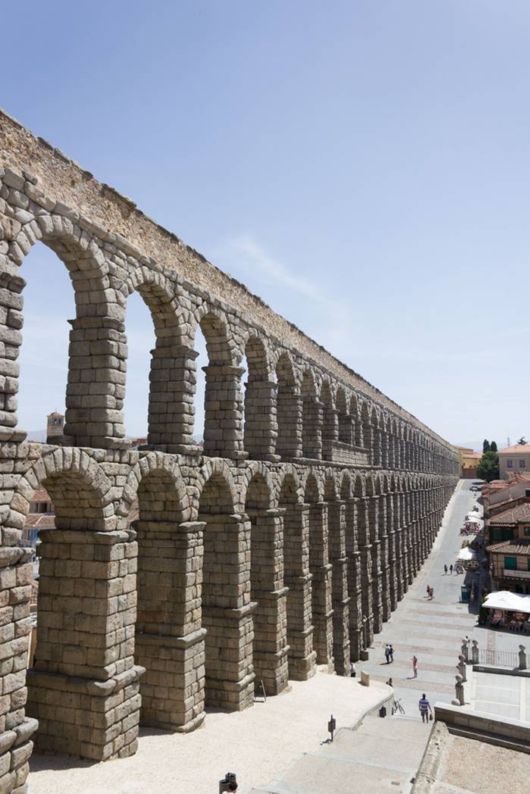 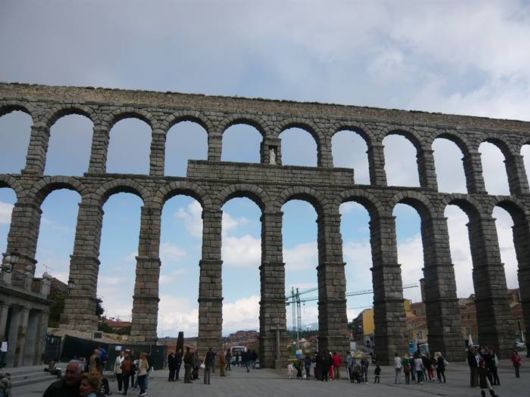