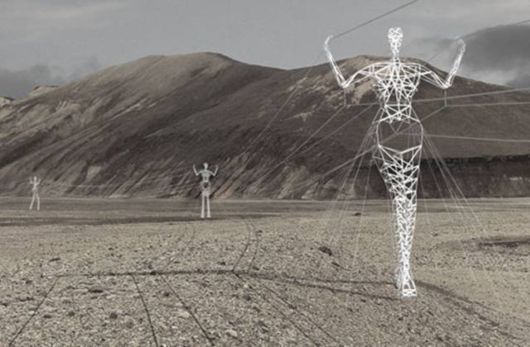 American firm Choi + Shine Architects designed these conceptual electricity pylons shaped like human figures to march across the Icelandic landscape. Each pylon would be assembled from modular parts, which could be adapted into various positions to given the impression the the statues are walking, climbing or crouching. The 30-metre tall statues would be supported on concrete footings and are an alteration of the steel frame used by existing pylons. Called Land of Giants, the project was originally submitted for a 2008 competition held by Icelandic transmission company Landsnet and the Association of Icelandic Architects.The design was one of four winners at the recent 2010 Boston Society of Architects Unbuilt Architecture Awards 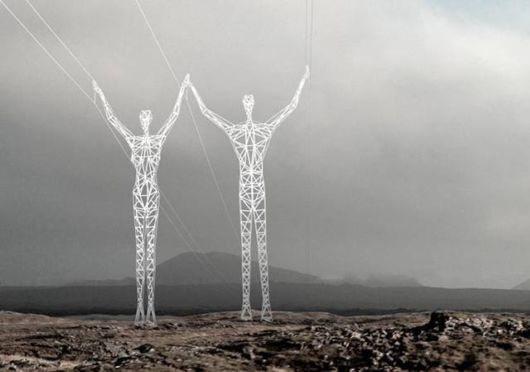 This design transforms mundane electrical pylons into statues on the Icelandic landscape.Making only minor alterations to well established steel-framed tower design, we have created a series of towers that are powerful, solemn and variable. These iconic pylon-figures will become monuments in the landscape. Seeing the pylon- figures will become an unforgettable experience, elevating the towers to something more than merely a functional design of necessity. 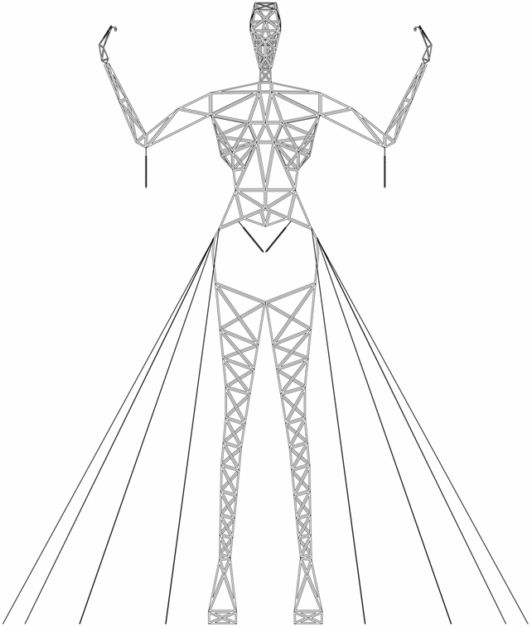 In addition, the pylon-figures can also be arranged to create a sense of place through deliberate expression. Subtle alterations in the hands and head combined with repositioning of the main body parts in the x, y and z-axis, allow for a rich variety of expressions. The pylon-figures can be placed in pairs, walking in the same direction or opposite directions, glancing at each other as they pass by or kneeling respectively, head bowed at a town. 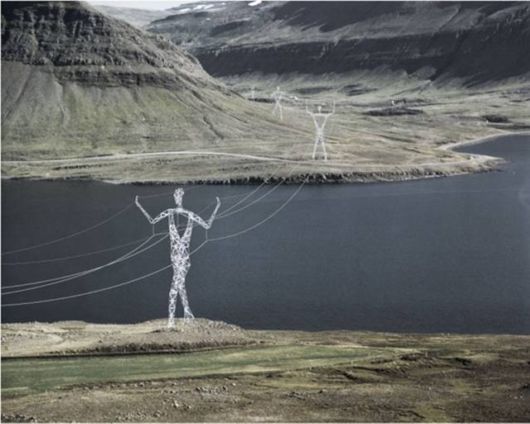 Despite the large number of possible forms, each pylon-figure is made from the same major assembled parts (torso, fore arm, upper leg, hand etc.) and uses a library of pre-assembled joints between these parts to create the pylon-figures? appearance. This design allows for many variations in form and height while the pylon-figures? cost is kept low through identical production, simple assembly and construction. 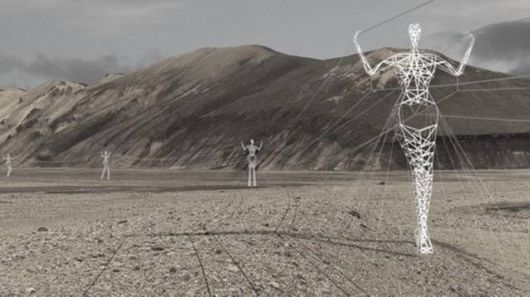 The pylon-figures are designed to provide supports for the conductors, ground wires and other cables all within required clearances. These clearances are maintained in the various shown positions. The towers are largely self-supporting, sitting on concrete footings, perhaps with the addition of guy wires, depending on requirements of the loading wires.Like the statues of Easter Island, it is envisioned that these one hundred and fifty foot tall, modern caryatids will take on a quiet authority, belonging to their landscape yet serving the people, silently transporting electricity across all terrain, day and night, sunshine or snow.

Special constraints & site description: The pylons were intended to be constructable, affordable and durable.
Design challenges & solutions: We sought to make an iconic, unforgettable pylon, that created an identity for Iceland and the power company.
Original/Adaptation: The design is original.
Unusual/innovative building components: Each structure is composed of a kit of parts, minimizing construction costs.
Sustainable design elements: The structure is predominantly recyclable
Material use: Steel, glass and concrete 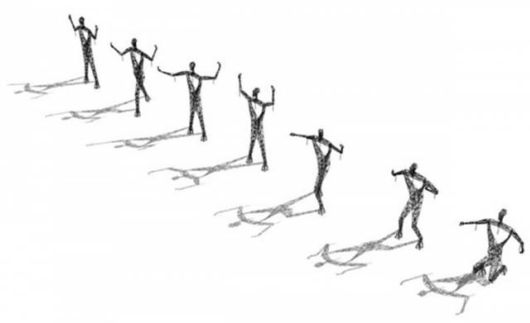