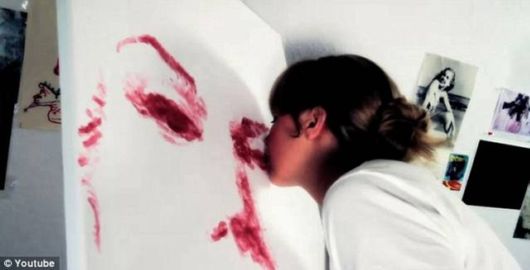 Skill: Instead of a paintbrush, Ms Irish employs her rouged lips to create a portrait of Marilyn Monroe

Jackson Pollock painted with drips, while this young artist paints with her lips.
Natalie Irish of Houston, Texas paints by putting on lipstick, then pressing her lips against a blank canvas.

By varying the pressure of her kisses, as if titillating a lover, she can create large, nuanced images.

In a recent video she uploaded to YouTube (made by Chris O’Malley), Ms Irish creates a gorgeous portrait of icon Marilyn Monroe, solely with the use of her puckered lips.

Ms Irish told MailOnline.com that she had learned how to paint pictures with thumbprints back in high school.

She said: ‘I always got a good response from them, but because it had been done before by other artists, I never felt like it was "my own". 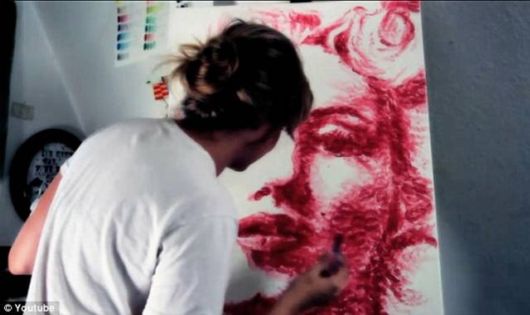 Unique style: Ms Irish has found her own way of adding colour to her life

‘I was getting ready to go to a show one night and put on a bit of red lipstick. I blotted it on a piece of paper and it hit me.

‘I started experimenting and decided Marilyn Monroe would be the perfect candidate for a portrait with kisses!’

Ms Irish admitted that her lips get very tired, and that she owns ‘many tubes of both lipstick and chapstick’. 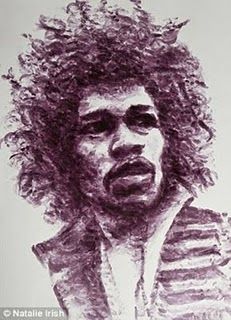 She said her eyes get tired from constantly moving between very close to farther back from the canvas to examine her work.

Getting cheeky on her website, natalieirish.com, she wrote of herself, ‘There are rumors that she has been creating works of art since in utero.

‘Following her birth, Natalie Irish quickly began to shock and amaze every entity with her astonishing artwork of all conceivable mediums and dominate all competitions of the arts’. 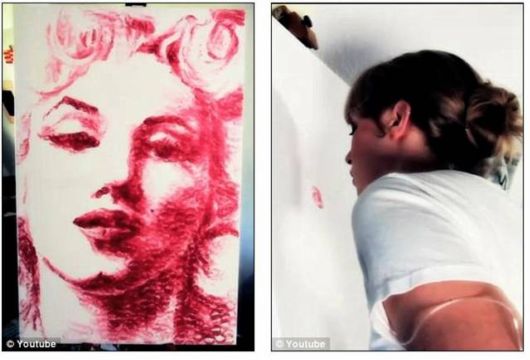 Trained: Ms Irish attended the University of North Texas, where she studied metalsmithing and ceramics

Ms Irish goes on to claim that she earned Best in District at the Houston Livestock Show and Rodeo Art Competition when she was five years old.

She then went on to study with the Galveston Arts Alliance, and attended the University of North Texas, where she studied metalsmithing and ceramics.

She also wrote: ‘One fateful October night Miss Irish was stricken with a debilitating and misunderstood disease that hospitalized her for weeks.

‘It ultimately left her completely dependent on a machine that was to be attached to her body 24/7 in order for her to sustain life’.

Ms Irish told MailOnline that the disease she mentioned is type I diabetes. ‘I have been on an insulin pump for going on ten years now’, she said. 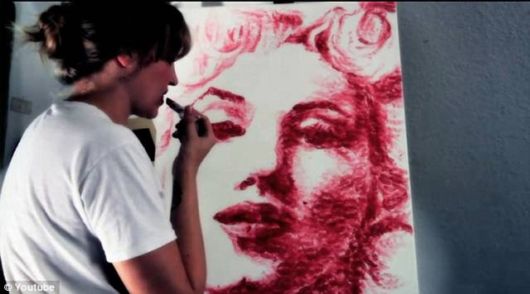 Cheeky: On her website, natalieirish.com, she writes, ‘There are rumors that she has been creating works of art since in utero’

On her website, Ms Irish showcases a range of colourful drawings and paintings, only some apparently generated with kisses.

Ms Irish shared with us a brand new picture she did, with her lips, of Jimi Hendrix.
She said that work is called ‘Influence’, and that it was a commission for famed gig poster artist Jermaine Rogers.

She made it by kissing a canvas with Urban Decay ‘Confession’ lipstick. She added, ‘It was a more sheer colour and had to be applied in numerous layers to get the darker tones’. 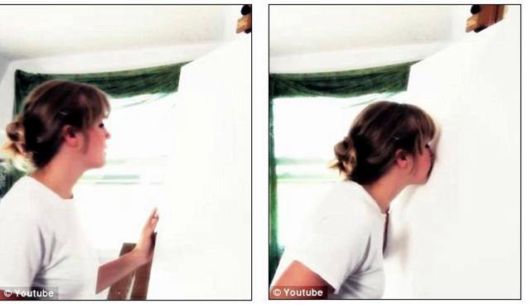 Blank canvas: Ms Irish starts with a fresh space, then starts kissing away, her lips dabbed with colour

In her ‘3D’ gallery, she also displays sculptures and vases.

No word on whether Ms Irish has any kisses left for loved ones.