Waterwork of art: American photographer creates amazing images which capture the split-second dyed liquids burst into colour – and are so exquisite they ‘look like glass sculptures’

Jack Long, a 55-year-old photographer from Milwaukee, Wisconsin, developed a technique for capturing the images
He build special devices to fire a precise mixture of water and dyes in order to capture – which work underwater
Mr Long made a set of images set in an art gallery and placed on pedestals after admirers said his pictures reminded them of fine glasswork

They look like exquisite vases made of finely-blown glass, placed carefully on a pedestal to receive the admiration of gallery visitors.

But in fact these colourful images are not precious artefacts preserved for the ages, but show a split-second in which specially-manipulated liquids are captured in fantastic formation.

They are the work of American photographer Jack Long, 55, from Milwaukee, who developed a special formula for the liquids himself 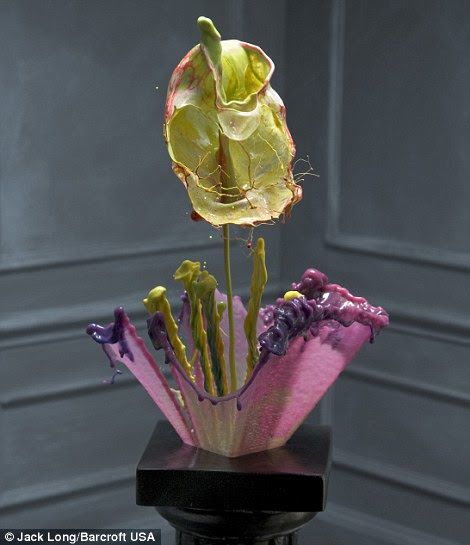 Split-second: The images could be mistaken for intricate glasswork, but are actually split-second snapshots of liquid in motion 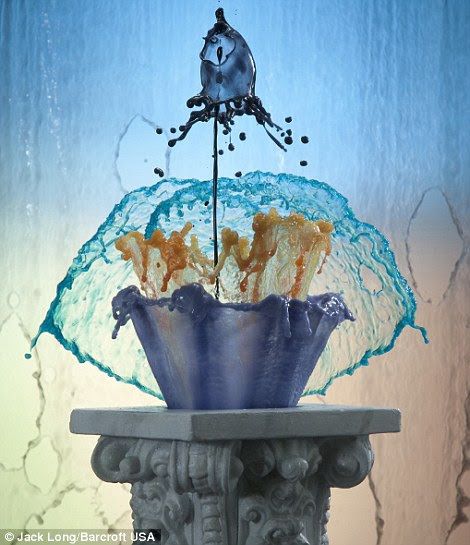 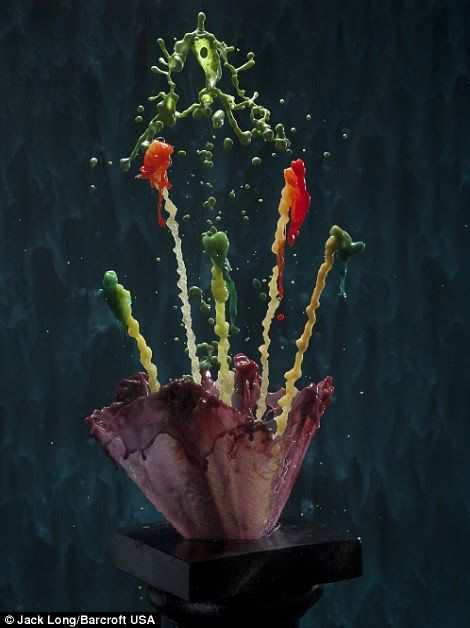 Art: American photographer Jack Long, 55, took the images, created on pedestals, after viewers said that his pictures look like they could be valuable works of art 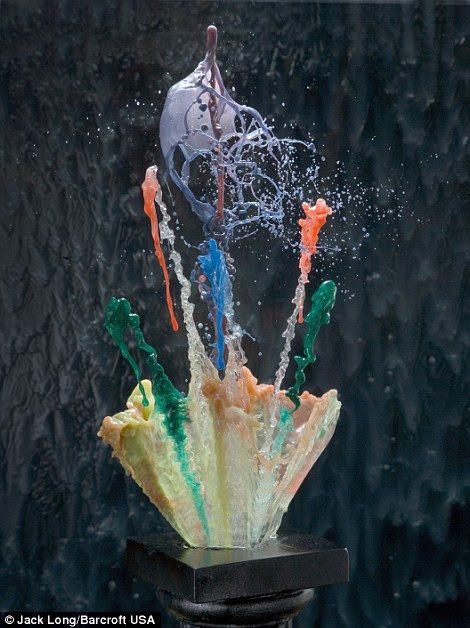 Alien: These images, part of the Wave/Cave series, look almost alive The accomplished images require a camera with an extremely fast shutter speed to capture properly, and also requires artificial dyes to go in the water, and custom-built machinery to spray the liquids into the correct shapes.
One of his projects, entitled ‘Gallery’ was prompted by viewers telling him that his images looked like solid glass sculptures – and that if they were real they would buy them.
He decided to set up a series of the fleeting formations on top of pedestals, so that the shapes and colours would look as much like solid artefacts as possible to onlookers.
Mr Long said: ‘Someone told me that if my work were actual sculptures, they would buy them. 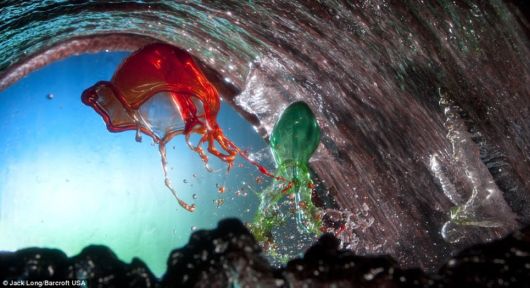 Disembodied: These delicate formations only last a second before being lost 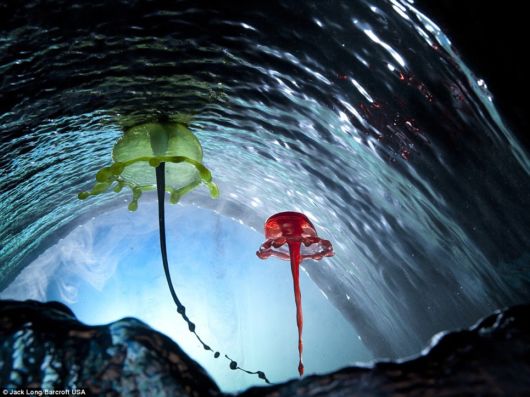 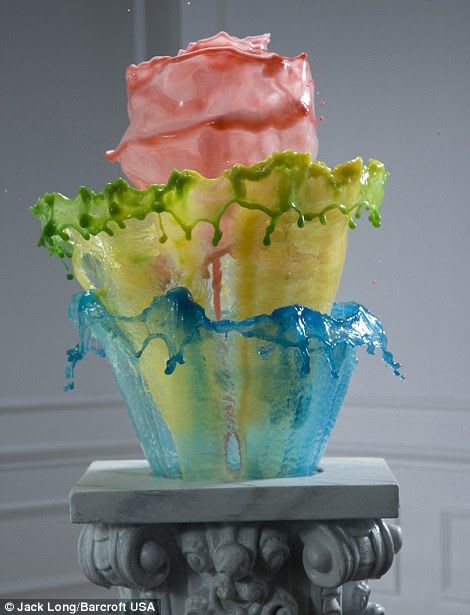 Bursting into colour: Mr Long uses special dyes to create the dramatic contrasts seen in images such as those above 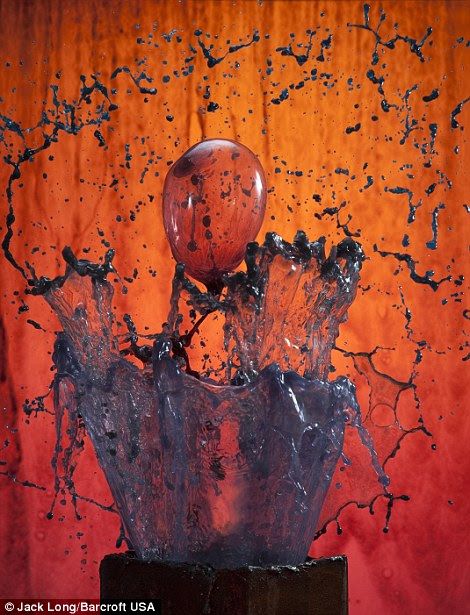 Marine: These two formations look almost like jellyfish ‘I decided to set the image up to make it look like it was in a gallery – used pillars and pedestals and played on the idea that the liquid was a sculpture.’
Mr Long has been working on his technique for three years. He originally began taking commercial photographs of coffees, cocktails and milkshakes, but now focuses on artistic images.
He said: ‘I accidentally discovered the unique formation of liquids and I thought I’d push it a bit more.
‘I realized it was completely unique within the world of splash art photography, and I wanted to take it to a new level.’
Mr long Jack creates these beautiful images in his garage, and outdoors, and it sometimes spends months experimenting with new techniques, which have led to several other projects. 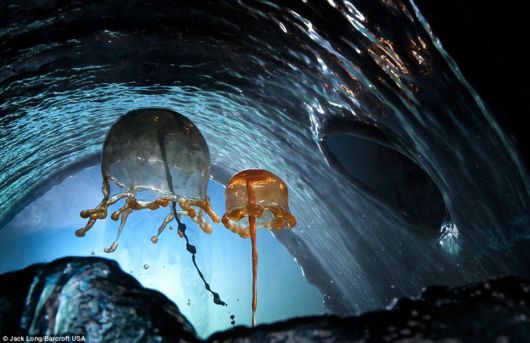 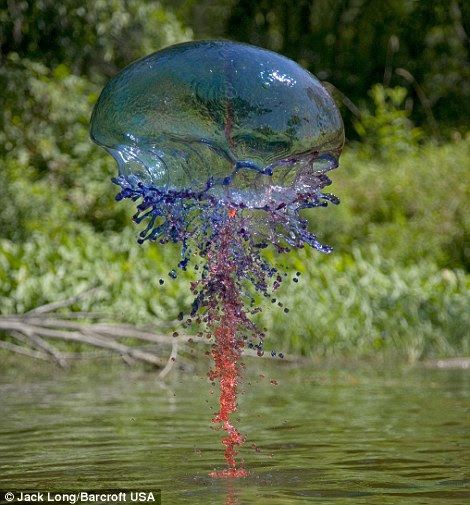 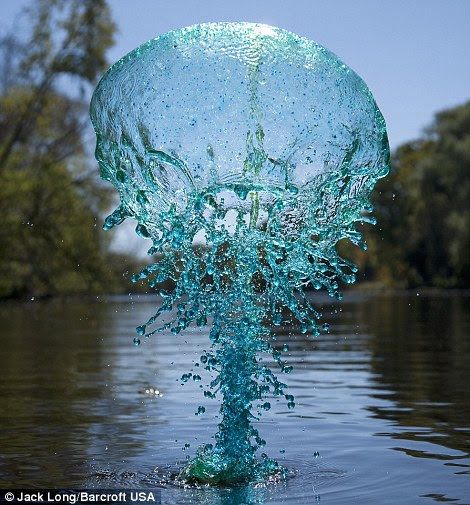 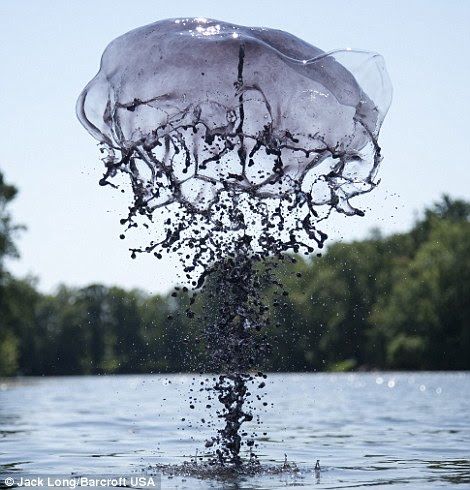 Machinery: For this set, called River and taken near his home, Mr Long created a special machine to squirt the liquid, which could work while submerged in the water His ‘River’ series was created in a river near his house, and features dramatic formations emerging from the water.
He said: ‘I had the idea for River in the back of my head. I thought it would be neat to have them coming out of the water.
‘I had to build an apparatus below the water surface that was water tight so that I could shoot the water into the air and capture it. It was quite a challenge.’
For another series, ‘Wave/Cave’ Jack built a fountain that would continuously flow in an arch over the exploding liquid forms.
‘I really enjoy creating these images because I’m working in uncharted territory. It makes it that much more wonderful.
‘I don’t know what it will look like when I’m beginning – it’s always rewarding when I see good results.’