Looking to lose a few stone? You definitely shouldn’t eat any of this then! Entire Chinese banquet carved out of ROCK

A sculptor has set a new world record by carving a banquet of 143 dishes out of stone.

Sun Zhaoyong has spent almost 20 years crafting his culinary works of art out of the traditional Chinese sculpting stone from the village of Shoushan. Among the collection are faithful representations of fish dinners, suckling pig and carved vegetables which have all been painstakingly shaped by hand. 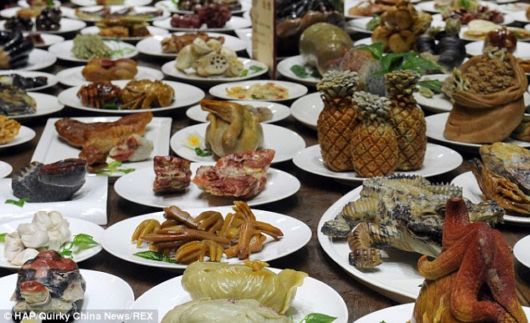 Solid meal: Each dish in the 143 plate banquet has been hand carved from naturally colored Shoushan stones 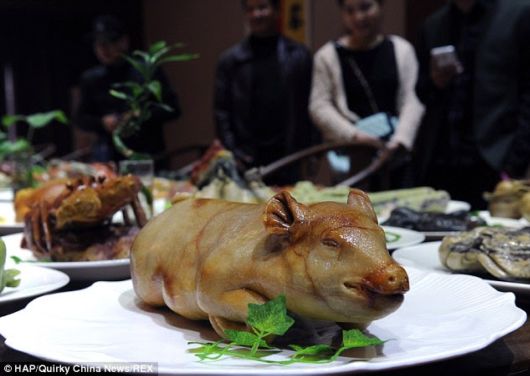 Tough meat: The set is the work of sculptor Sun Zhaoyong who created the collection over the past 20 years

For his hard work, the artist has been handed a certificate by a world record company in Shanghai, where the dishes are currently on display. Sun used only naturally colored Shoushan stones to create his work. The rock is some of the most famous raw material used in Chinese art. They have been used in for carving in the country for over 1,000 years and are one of the traditional ‘seal stones’ used by emperors to immortalise their regal logos. 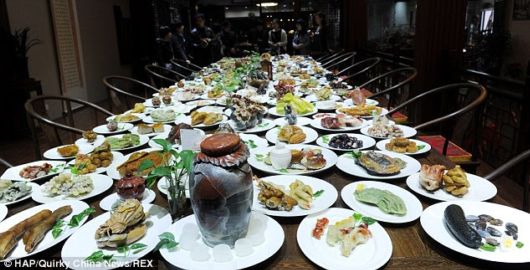 Bad for your teeth: Among the ‘dishes’ are plates of traditional Chinese fish and vegetable dishes

The rocks are believed to have been formed by tectonic movement more than 100 million years ago and are only found in the village of Shousan. Mining the stones is notoriously difficult, making them rare and valuable. There are around 100 varieties of Shoushan stone, which Tianhuang is the most precious type. 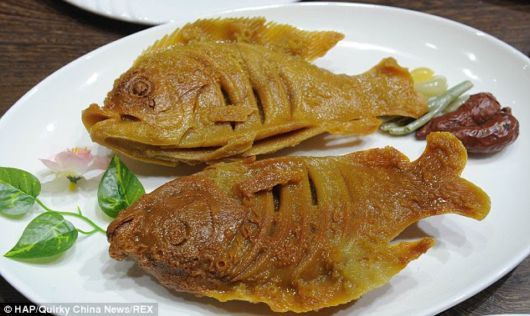 Organic food: These fish may look deep fried, but they have been painstakingly shaped from stone