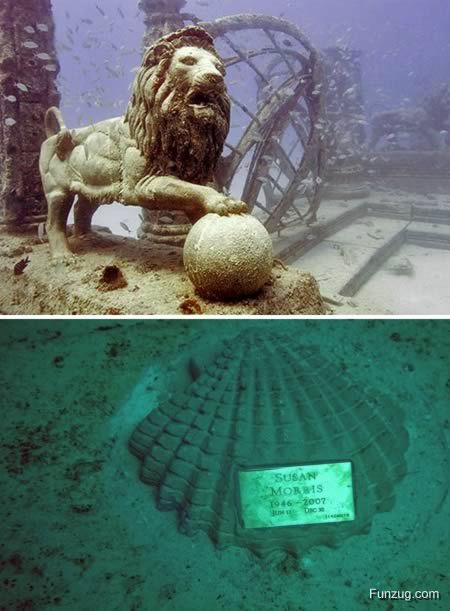 The Neptune Memorial Reef also known as the Atlantis Memorial Reef or the Atlantis Reef is an underwater mausoleum for cremated remains and the world’s largest man-made reef (covering over 600,000 square feet (56,000 m²) of ocean floor). The place was chosen at 3.25 miles (either 6.0 km or 5.2 km) off the coast of Key Biscayne, Florida. It is a type of burial at sea and the first phase is estimated to be able to accommodate 850 remains, with an eventual goal of more than 125,000 remains. The man-made reef, located three miles (5 km) off the coast of Florida’s Key Largo, opened in 2007 after a number of difficulties, including permits. The reef stretches across 16 acres (65,000 m2) of ocean floor designed as both a home for sea life and "a destination for divers". Cremated remains are mixed into different structures and columns.

Among its residents: 86-year-old Edith Hink of Naples who passed away last year. Her family decided she loved the water so much, they’d try something new. Hink was cremated and buried at the underwater cemetery off the coast of Miami Beach. 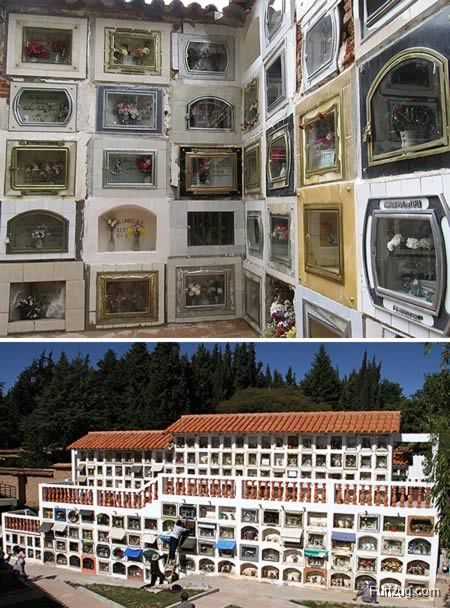 In Bolivia, at the Sucre’s Cementerio General, the family pays for a vault upon their loved one’s demise: $10,000 for seven years. After those seven years are up, the deceased’s corpse is moved from the vault into the ground. And after twenty years in the ground, the remains are removed entirely. Seems kind of harsh, but still: there are probably very few people whose deaths need more than 27 years of mourning.

Men are often buried with their workmates, betraying how tightly bound a Bolivian’s identity is to his profession. Here, they’re not so much family men who happen to work as truck drivers; they’re truck drivers who happen to have a family. In Sucre’s cemetery, large common vaults owned by unions ? coal miners, lawyers and teachers among them ? occupy a lot of ground. Likewise, children aren’t buried with their parents, but with other children under a large hill of white graves, which is both beautiful and sad. The kids’ shrines are filled with Disney characters, coke bottles, toys and poems. Adults, too, have shrines filled with the things they loved ? often tiny liquor bottles, or a pack of cigarettes.

There’s a lot of history in Sucre’s cemetery, as well. Among the many presidents buried here is Hilarión Daza, who sparked the disastrous War of the Pacific with Chile, which cost Bolivia its coastline.

The original character of the cemetery is first of all suggested by its name: Cimitirul Vesel that means The Merry Cemetery. This paradoxical name is due to the vivid colours of the crosses and the amusing or satirical epitaphs carved on them. It is said that this joyful attitude towards death is a legacy of the Dacians who believed in the immortality of the soul and that death was only a passage to a better life. They did not see death as a tragic end, but as a chance to meet with the supreme god, Zalmoxis.

The cemetery dates back to the mid-1930′s and is the creation of the local folk artist Stan Ioan Patras, sculptor, painter and poet rolled in one. Patras used all his skills to create colourful tombstones with naïve paintings describing, in an original and poetic manner, the persons that are buried there as well as scenes from their lives.

4. City Of The Dead (North Ossetia) 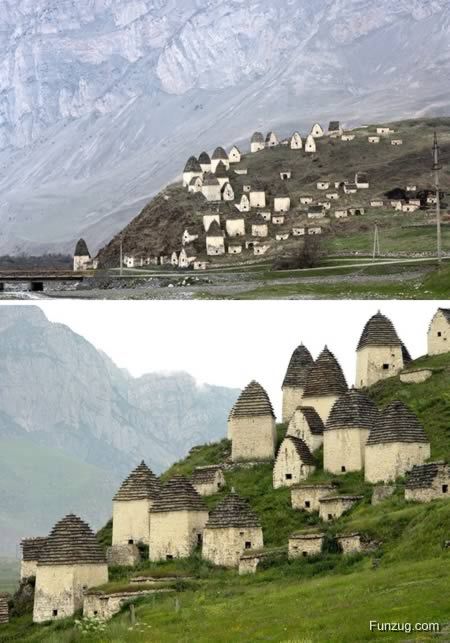 Christian churches, agricultural prosperity and a magnificent ancient necropolis, known as the City of the Dead attract tourists from all over Russia. The village of Dargavs, or as the locals call it, the City of the Dead, has a cemetery with almost 100 ancient stone crypts where people that lived in the valley buried their loved ones along with clothes and belongings.

The first mention about the City of the Dead dates back to the beginning of the 14th Century. The ancestors of Ossetians settled down on the five mountain ridges, but the land was so expensive they were forced to choose the windiest and most unserviceable place for their cemetery. In the times of the plague many people, with no one left to bury them, would come to the crypt and wait for their death. 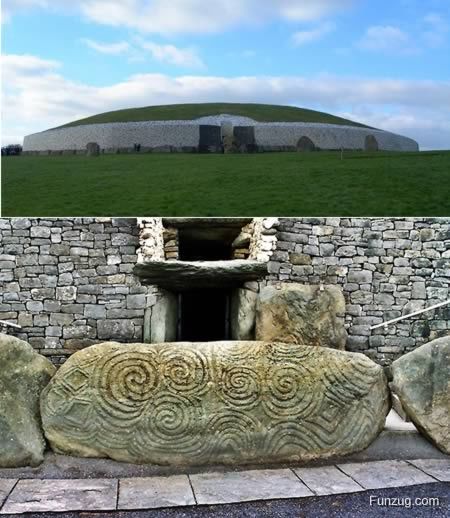 Newgrange, County Meath, Ireland, was constructed over 5,000 years ago (about 3,200 B.C.), making it older than Stonehenge in England and the Great Pyramid of Giza in Egypt. The Megalithic Passage Tomb at Newgrange was built about 3200 BC. The kidney shaped mound covers an area of over one acre and is surrounded by 97 kerbstones, some of which are richly decorated with megalithic art. The 19 meter long inner passage leads to a cruciform chamber with a corbelled roof. It is estimated that the construction of the Passage Tomb at Newgrange would have taken a work force of 300 at least 20 years. 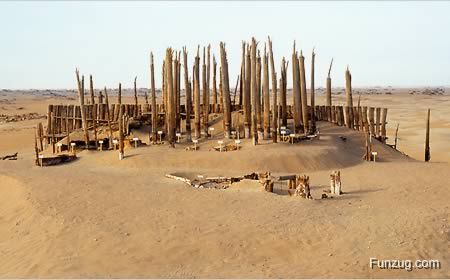 In the middle of a terrifying desert north of Tibet, Chinese archaeologists have excavated an extraordinary cemetery. Its inhabitants died almost 4,000 years ago, yet their bodies have been well preserved by the dry air.

The cemetery lies in what is now China’s northwest province of Xinjiang, yet the people have European features, with brown hair and long noses. Their remains, though lying in one of the world’s largest deserts, are buried in upside-down boats. And where tombstones might stand, declaring pious hope for some god’s mercy in the afterlife, their cemetery sports instead a vigorous forest of phallic symbols, signaling an intense interest in the pleasures or utility of procreation. 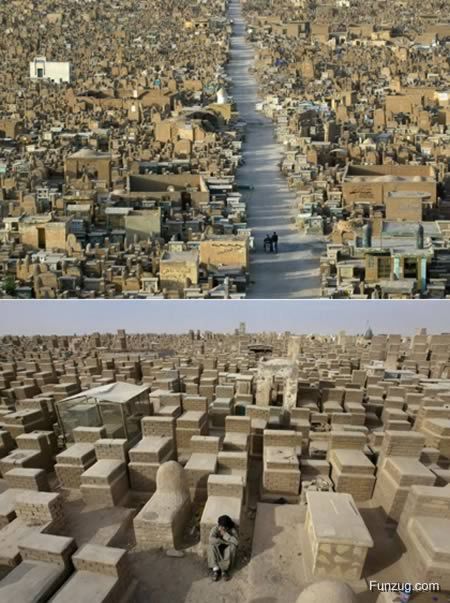 Wadi-us-Salaam (Valley of Peace) is the largest Islamic cemetery, and one of the largest cemeteries in the world. Located in Najaf, Iraq, this cemetery holds the graves of many Prophets, and is located near the Holy Tomb of Hazrat Imam Ali ibn Abu Talib (as). 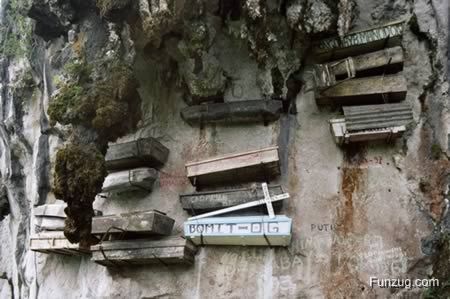 About six hours by bus from the Luzon island town of Banaue, north of Manila, the people of Sagada have devised a unique burial ritual involving the placement of dead relatives into caves after carefully preparing a hollowed out log. These coffins are carved by the elderly before they die; if they are too ill or weak their son or other close relative will do it for them. This ritual involves pushing the bodies into the tight spaces of the coffins, and often bones are cracked and broken as the process is completed.

La Recoleta Cemetery is a famous cemetery located in the exclusive Recoleta neighbourhood of Buenos Aires, Argentina. It contains the graves of notable people, including Eva Perón, Raúl Alfonsín, and several presidents of Argentina. Recoleta Cemetery is both an outstanding cemetery and a highly valuable architectonic piece. It is a true outdoors art gallery, a unique exhibition of different architectonic styles and sculptures. In 1946, Recoleta Cemetery was declared National Historic Museum, since, among its little streets, we can find the graves of national heroes, Argentine presidents, brave soldiers, great scientists, and renowned artists and celebrities. 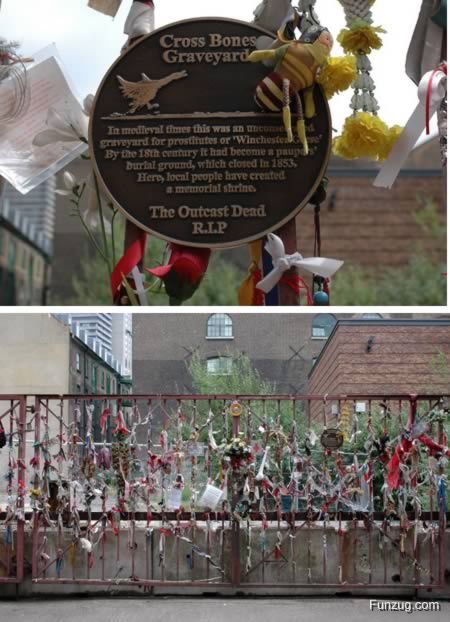 The Cross Bones Graveyard is an unusual cemetery located in the United Kingdom. It is a post-medieval disused burial ground in London, England. Originally, this graveyard was established as an unconsecrated graveyard for ?single women,’ a euphemism for prostitutes and was known as the ?Single Woman’s Churchyard’. It had become a pauper’s cemetery in 1769. It is believed that more than 15,000 people have been buried there. 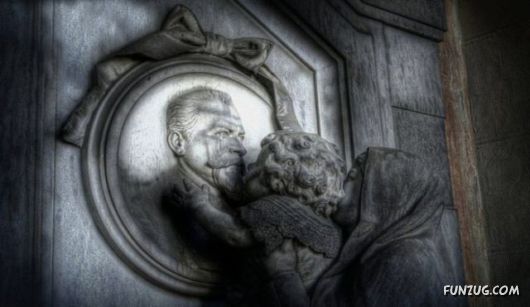 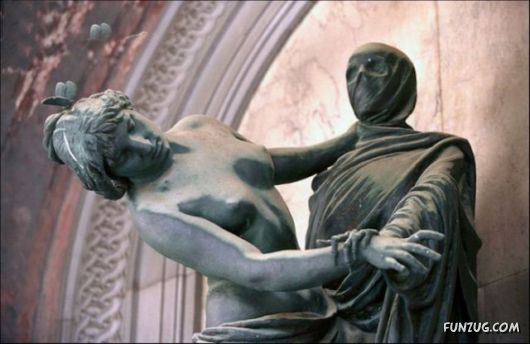 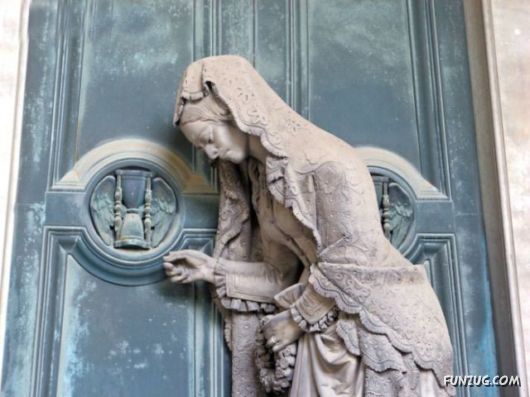 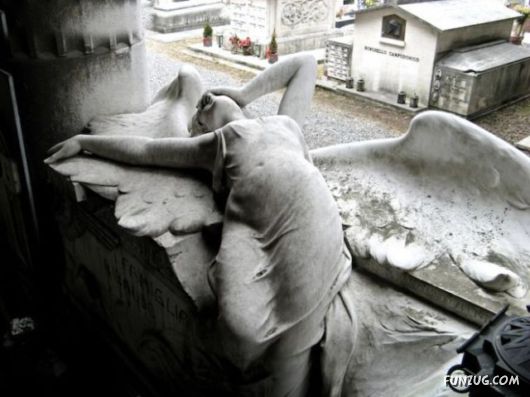 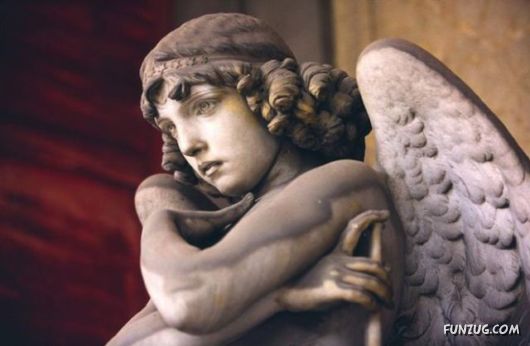 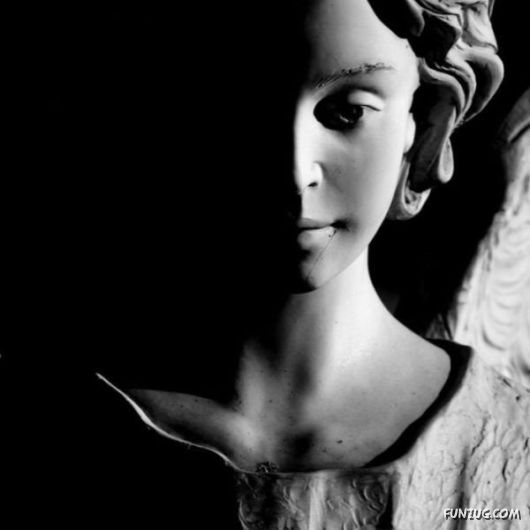 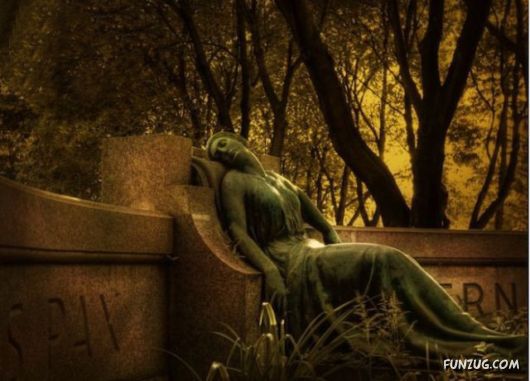 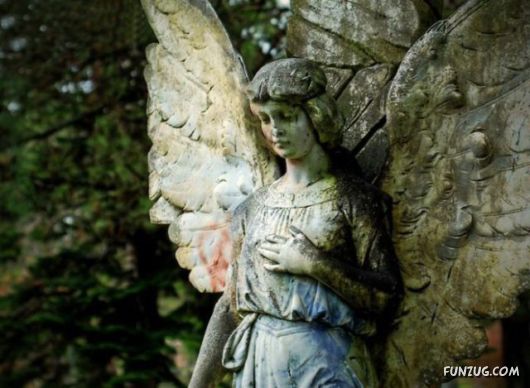 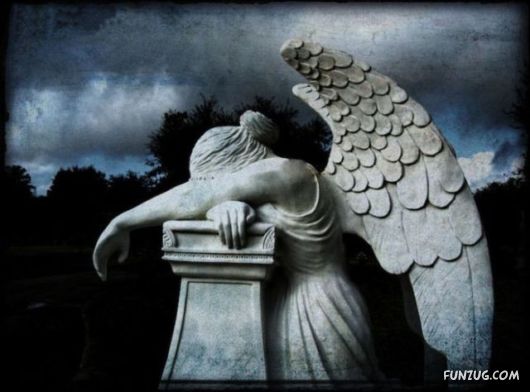 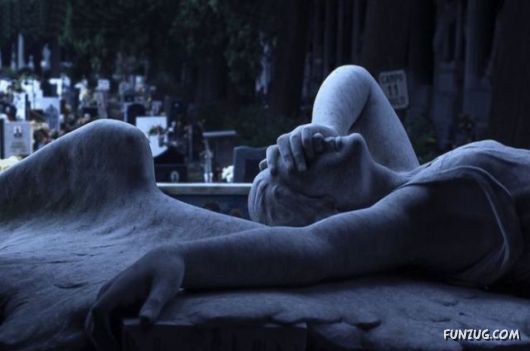 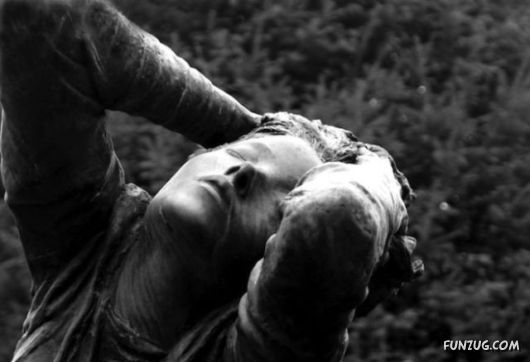 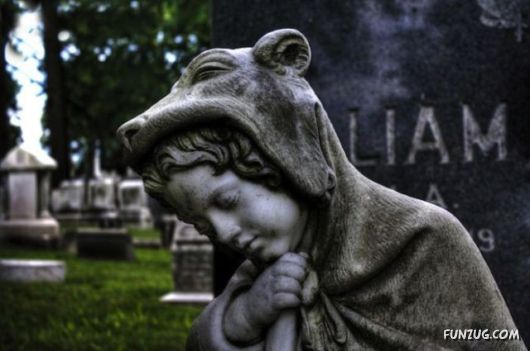 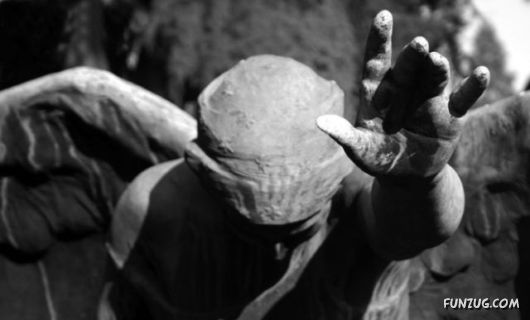 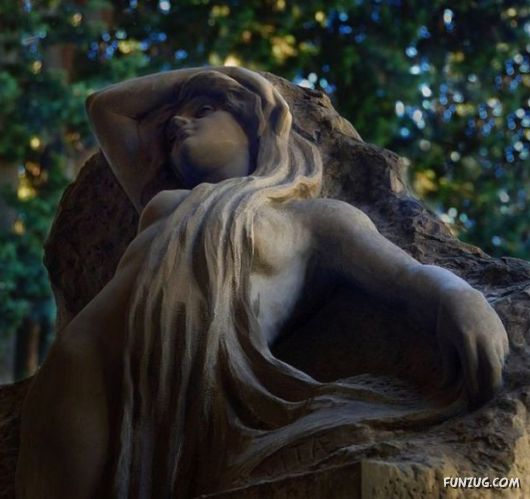 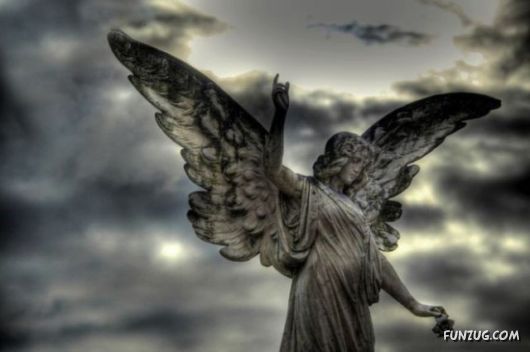 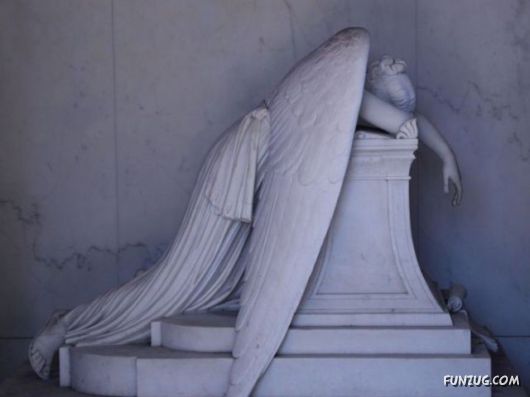 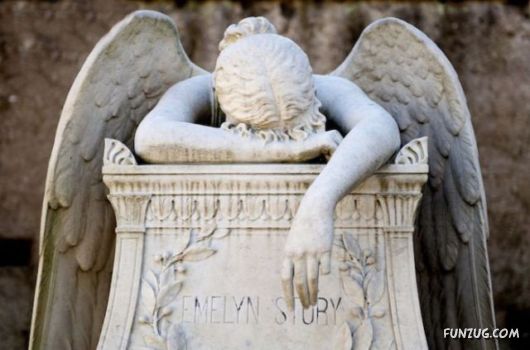 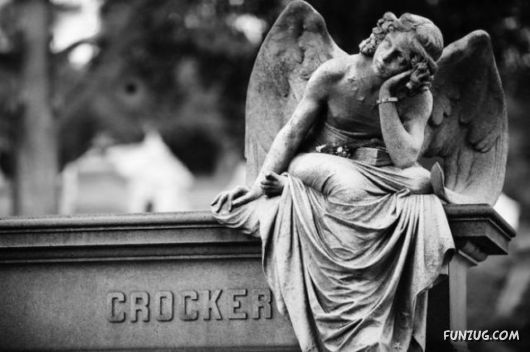 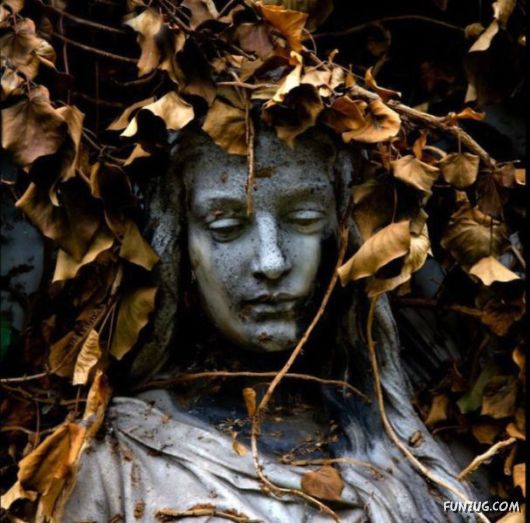 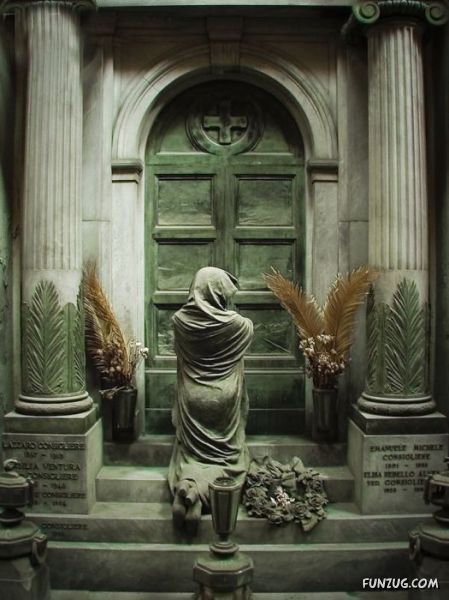