Amazing works are by Italians Antonio Magliocchetti and Stefano Adorinni
They have made more than 130 photos from bread, pineapples and coffee
Antonio: ‘We usually create them in our living rooms during our free time’
Their secret is £1 figurines on eBay, a good camera and very steady hands

Art may be food for the soul, but these works really are good enough to eat.
Two amateur photographers have made more than 100 miniature scenes in their living rooms – with food from their kitchen cupboards.
The ‘food art’ includes a moon landing in parmesan cheese, a ski slope on an iced cake, an office built from wafer biscuits and a crib containing the baby Jesus inside a muffin. 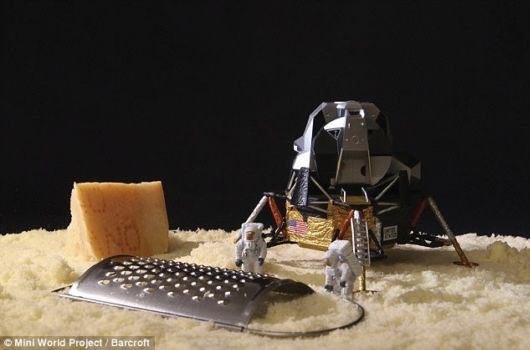 One small step for parmesan: Italian ‘food artists’ Antonio Magliocchetti and Stefano Adorinni have created more than 130 photos of a miniature world using everyday objects – often from their kitchens 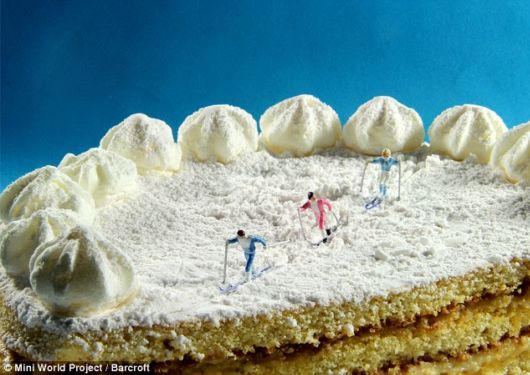 Off-piste: In one creation these cross-country skiers appear to have got lost on the icing on a cake 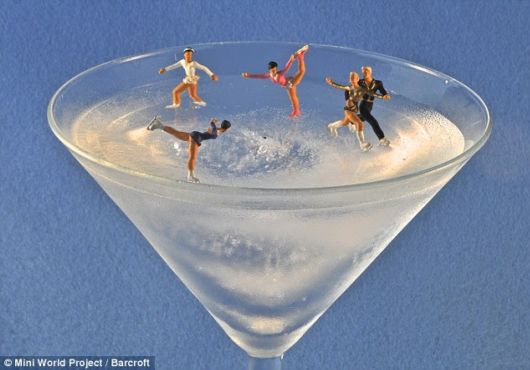 Dancing on iced martini: Figure skaters take to the surface of a frozen cocktail in another shot by the artists 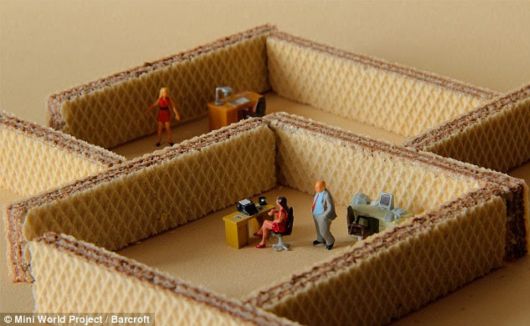 Earning a crust: Office workers are hemmed in by wafer biscuits, but at least they can eat their way out 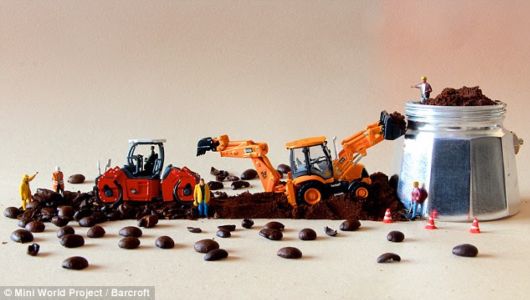 On their coffee break: Construction workers hauling buckets of beans – including with a miniature JCB The artists from Udine, Italy, used tiny model people which they bought from hobby shops and from eBay for as little as £1.
Antonio Magliocchetti and Stefano Adorinni began their Mini World Project in 2012 and have since amassed more than 130 images, expanding their repertoire to household objects like vinyl records, glass bottles and a fish tank.

Each shot takes up to two hours to piece together using ordinary household objects, coloured paper and a tripod-mounted camera with a macro lens.
The pair have sold their creations to cafes, restaurants and offices, where they are now on display across Italy.
Mr Magliocchetti, 54, said: ‘The construction is very fun, finding the items and building the sets. 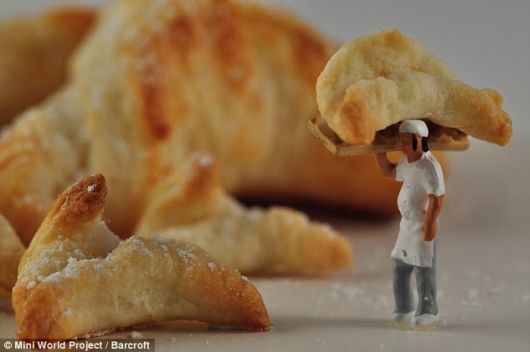 Big appetite? This baker carries a croissant bigger than him. The artist pair use 1/67 scale models 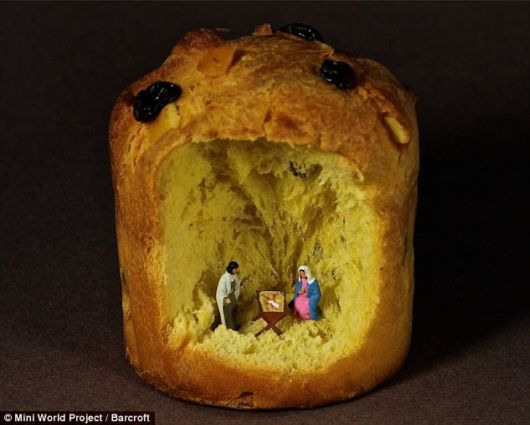 No crib for his bread: The baby Jesus finds an unusual scene for a manger inside a hollowed-out panettone 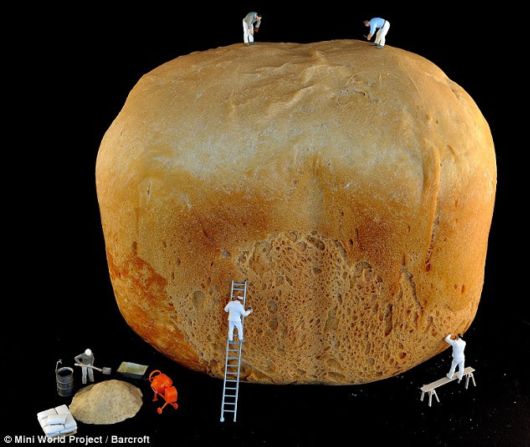 Rising to the challenge: Builders create a bread house out of dough (bottom left) in a tiny cement mixer 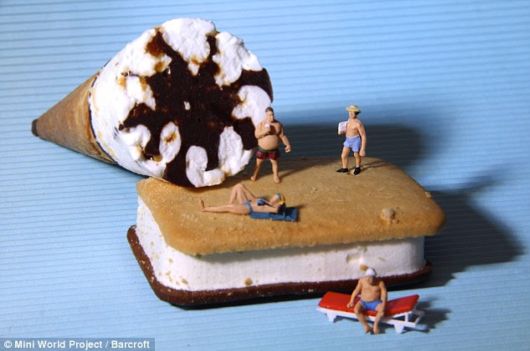 Ice cream Sunday: Subathers lounge around on their day off with more food than they can eat 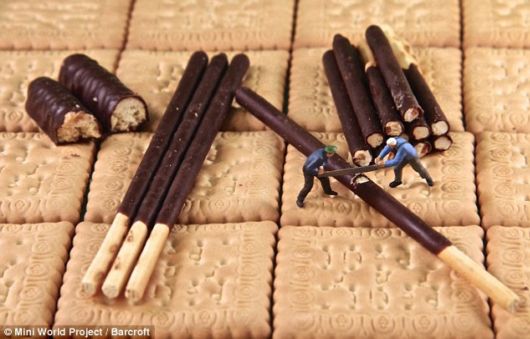 Sawing chocolate: This logging depot made out of thin wafers takes the biscuit in one photo by the artists 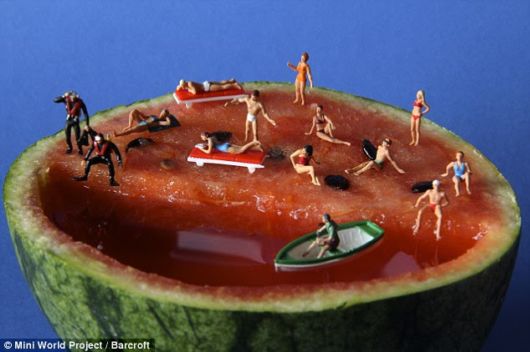 Watermelon men: There was no seed of doubt for the swimmers in this miniature beach scene 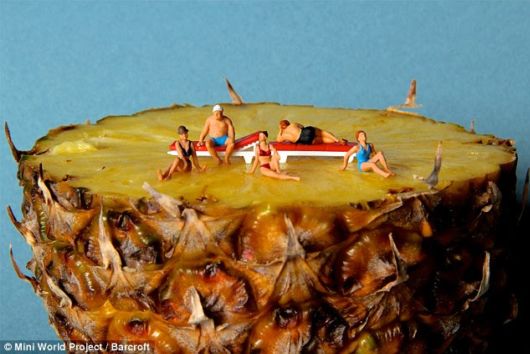 Golden sun: The artists created a perfect sunbathing spot for their figurines with half a pineapple 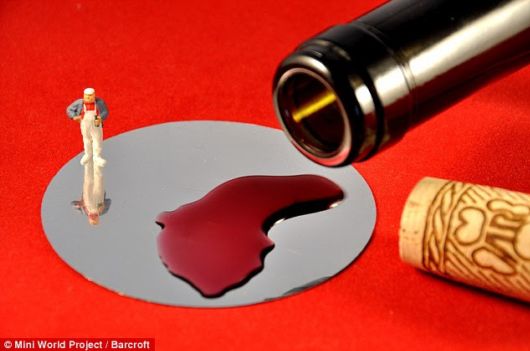 Spill something? A man drinks wine next to a full-size bottle in this photo by the two Italian artists 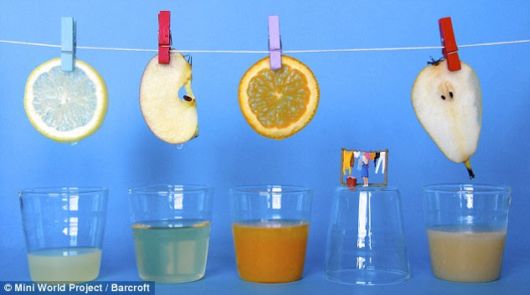 Dried fruit: Brightly-coloured clothes on a miniature washing line are outshone by slices of pear and lime ‘We get inspiration from everywhere: the kitchen, food. It can strike at any time.’
Despite the intricate nature of their shots, the pair use some surprisingly low-key methods to create them.
They tend to set up their ‘studio’ on the carpets of their living rooms during their free time.
For the people in their scenes they favour 1/87 scale figurines, which they buy from hobby shops or on eBay for as little as £1 each.
Mr Magliocchetti said: ‘The reaction is highly variable. It is often the surprise and amazement of seeing certain combinations that get people going. It’s an attempt to revive what is not alive.’ 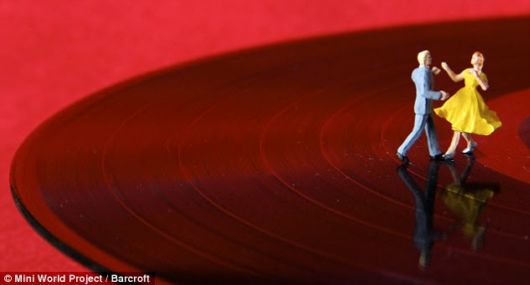 Our song: Some of the photos do not include food, such as this one of a couple dancing on a vinyl record 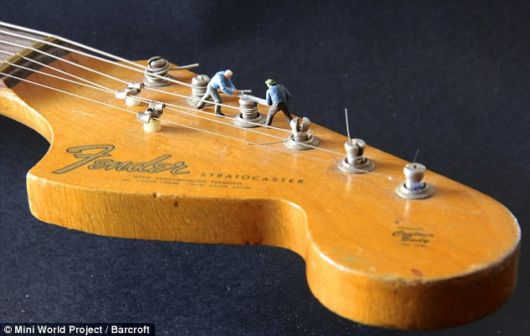 Tuning up: The musical theme continues as tweaking these guitar strings becomes an industrial task 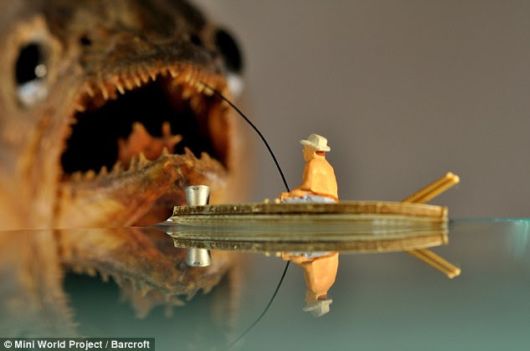 You’re going to need a bigger boat: This fisherman comes face-to-face with his gigantic catch 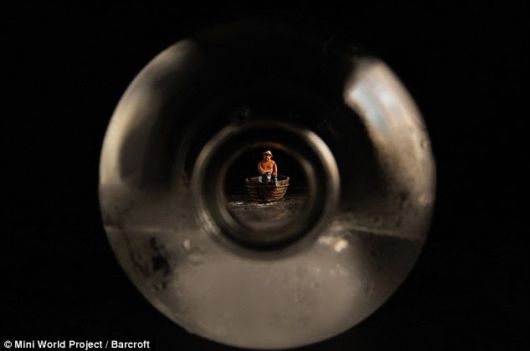 Castaway: A rowboat delivers a message in a bottle in this photo, taken at an unusual angle 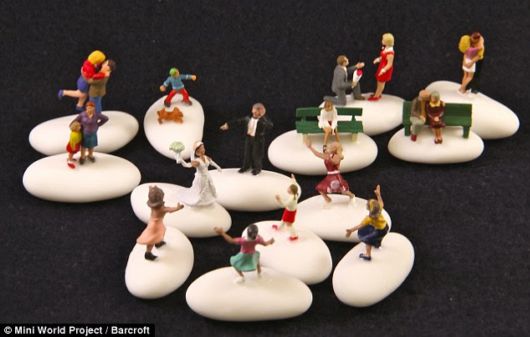 White wedding: As the bride throws her bouquet, guests clamour to catch it without falling off their tiny pebbles 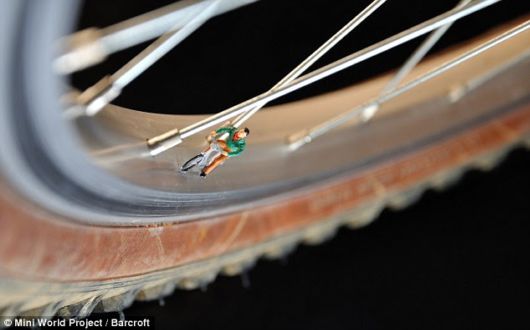 Daredevil: A cyclist takes on a full-size companion as he makes his way round the rim of a bicycle wheel 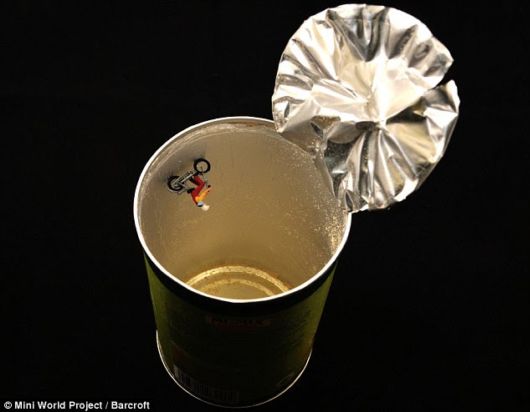 Wall of death: An empty tin can becomes a funfair stunt in this photo, created in the artists’ living rooms 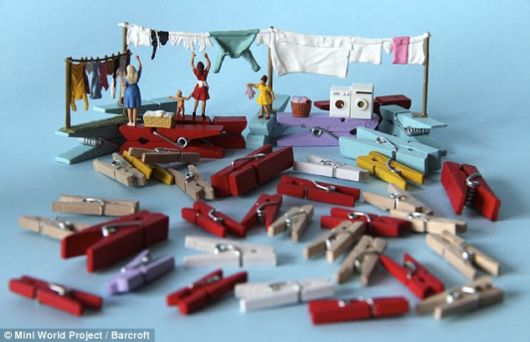 In this photo, women and children are dwarfed by their own clothes pegs as they try to reach for the washing The pair are continuing with their project, even releasing ‘how-to’ images giving a glimpse of how their pieced their shots together.
The fantastical scenes include workers sawing apart ‘logs’ made of wafer biscuits and a woodland scene with closed cup mushrooms transforming into trees.
Some are a little more bizarre, with a tiny clothes line next to a line of dripping fruit slices.
And many of the pair’s characters are stranded on top of fruit slices, frozen drinks or biscuit mountains with no sight of terra firma. But at least if they get stuck there’s a solution: they can always eat their way out. 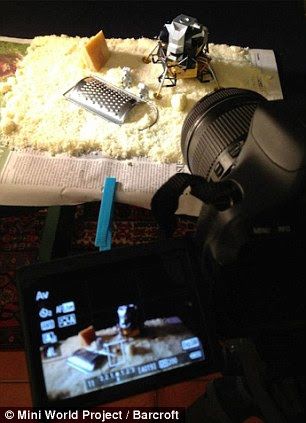 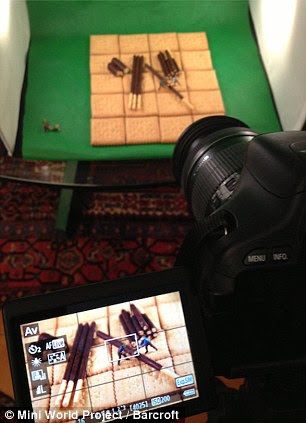 So it WAS a hoax! ‘Making-of’ photos released by the pair show how they created the moon landing made of parmesan cheese, left, and the logging depot constructed from wafer biscuits, right – in their living rooms 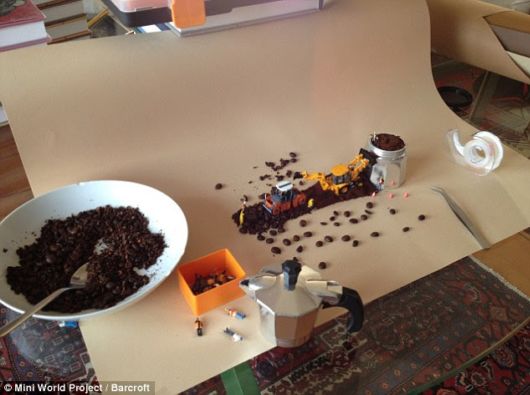 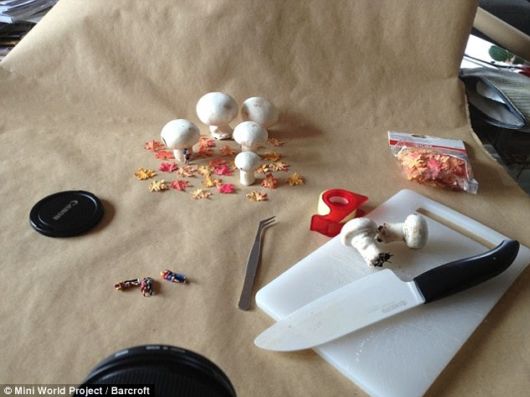 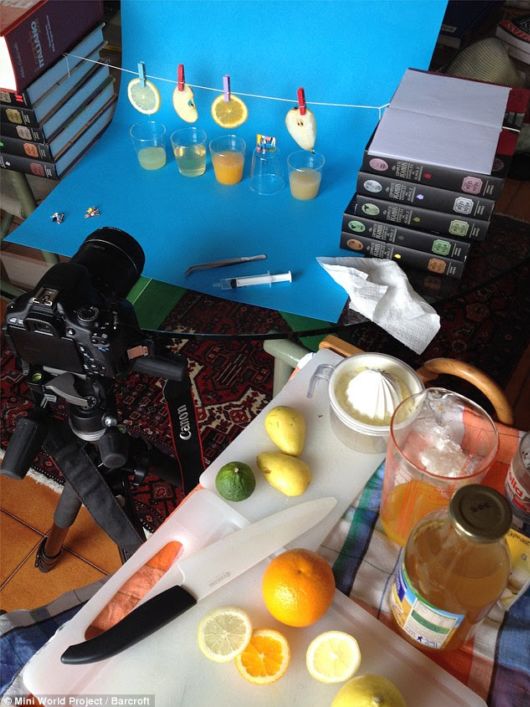 Complex: The scenes needed a macro lens, but otherwise used household objects and a perfectionist mind