A very intresting work of art in Japan

Stunning crop art has sprung up across rice fields in Japan . But this is no alien creation – the designs have been cleverly planted.
Farmers creating the huge displays use no ink or dye. Instead, different colors of rice plants have been precisely and strategically arranged and grown in the paddy fields.

As summer progresses and the plants shoot up, the detailed artwork begins to emerge. 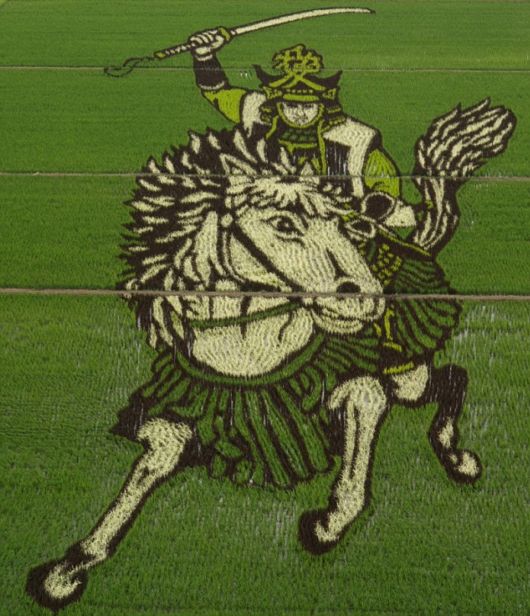 A Sengoku warrior on horseback has been created from hundreds of thousands of rice plants, the colors created by using different varieties, in Inakadate in Japan

The largest and finest work is grown in the Aomori village of Inakadate , 600 miles north of Toyko, where the tradition began in 1993.

The village has now earned a reputation for its agricultural artistry and this year the enormous pictures of Napoleon and a Sengoku-period warrior, both on horseback, are visible in a pair of fields adjacent to the town hall.

More than 150,000 visitors come to Inakadate, where just 8,700 people live, every summer to see the extraordinary murals.

Each year hundreds of volunteers and villagers plant four different varieties of rice in late May across huge swathes of paddy fields. 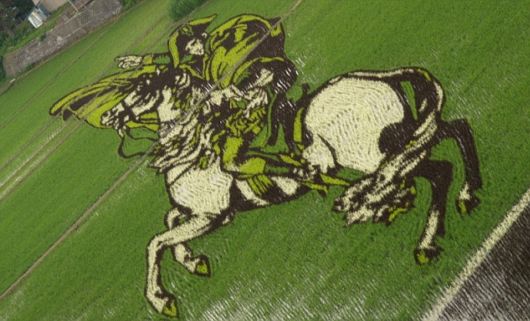 Napoleon on horseback can be seen from the skies, created by precision planting and months of planning between villagers and farmers in Inkadate 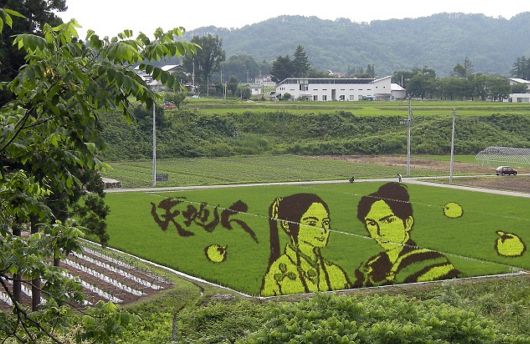 Fictional warrior Naoe Kanetsugu and his wife Osen appear in fields in the town of Yonezawa , Japan

And over the past few years, other villages have joined in with the plant designs.

Another famous rice paddy art venue is in the town of Yonezawa in the Yamagata prefecture.

Various artwork has popped up in other rice-farming areas of Japan this year, including designs of deer dancers. 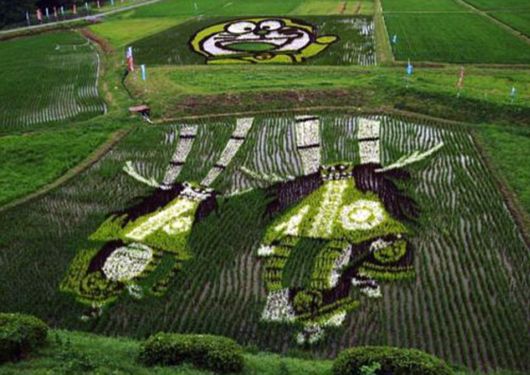 The farmers create the murals by planting little purple and yellow-leafed kodaimai rice along with their local green-leafed tsugaru roman variety to create the coloured patterns between planting and harvesting in September.

The murals in Inakadate cover 15,000 square meters of paddy fields. From ground level, the designs are invisible, and viewers have to climb the mock castle tower of the village office to get a glimpse of the work.

Rice-paddy art was started there in 1993 as a local revitalization project, an idea that grew out of meetings of the village committee. 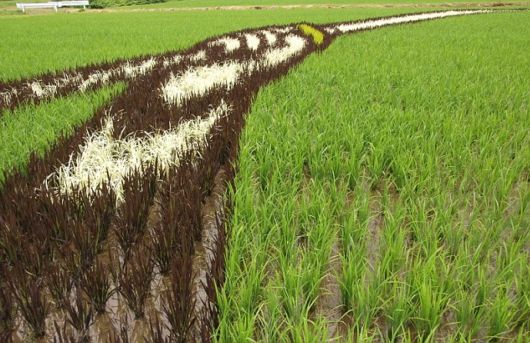 Closer to the image, the careful placement of thousands of rice plants in the paddy fields can be seen 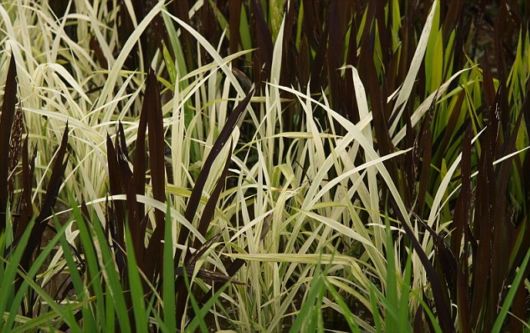 In the first nine years, the village office workers and local farmers grew a simple design of Mount Iwaki every year.

But their ideas grew more complicated and attracted more attention. In 2005 agreements between landowners allowed the creation of enormous rice paddy art.

A year later, organizers used computers to precisely plot planting of the four differently colored rice varieties that bring the images to life.