Welcome to planet soap bubble: The extraordinary close-up pictures that look like an alien world

At first glance these incredible images appear to show a sun shining on a distant alien world. But on closer inspection the oily surface of the ‘planets’ reveal they are actually soap bubbles.

Richard Heeks has been taking the amazing photographs for the past few years and said it had become something of an obsessive hobby.

The 38-year-old from Exminster, near Exeter, said he created the pictures through a combination of experimentation and good luck. 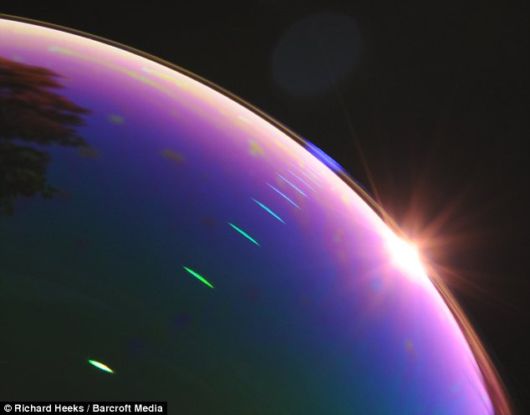 This image is titled ‘Solar flares on planet soap bubble’: ‘There is no editing at all here, just a crop,’ says Mr Heeks, adding the image reminded him of a scene from Kubrick’s 2001 Space Odyssey. 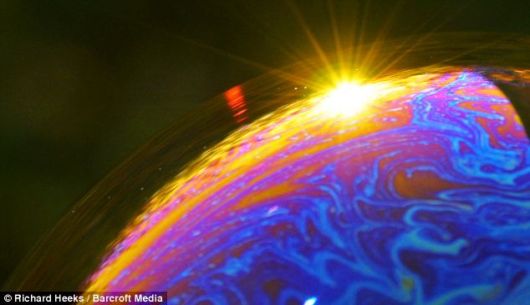 ‘I’ve been trying to get better shots of "coronas" on soap bubbles. This is my first try.’ 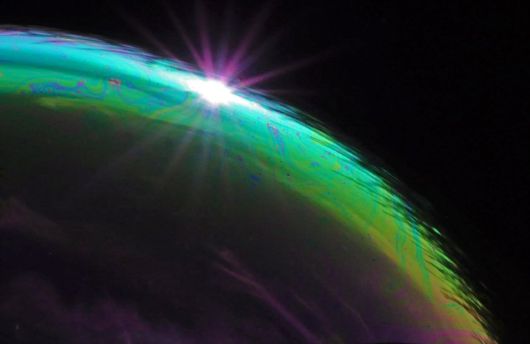 The photographer from Exminster, near Exeter, said he created the pictures through a combination of experimentation and good luck

‘Sometimes I stand back and just watch a bubble as it hangs in the air. I walk around it, admiring it, and I see how the light plays on it,’ Mr Heeks said.

‘And sometimes I photograph a bubble and see things I didn’t expect to see. I didn’t realise these bubbles would look like planets until I caught one or two good ones and then looked at them carefully on the camera screen.

‘I find it uncanny that they seem to have an atmosphere just like a planet. And with the sun corona on the surface, it reminds me of pictures of the earth from space, where the sun appears behind Earth’s surface.’ 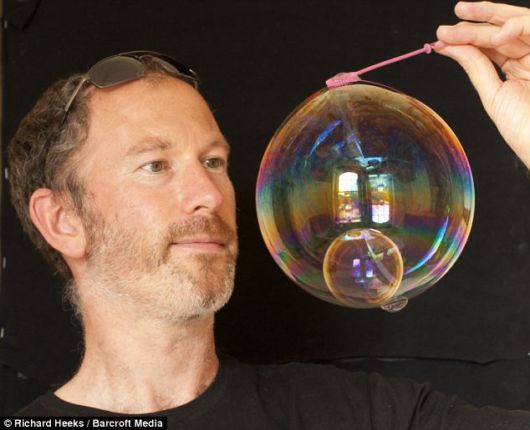 ‘Sometimes I stand back and just watch a bubble as it hangs in the air. I walk around it, admiring it, and I see how the light plays on it,’ Mr Heeks said. 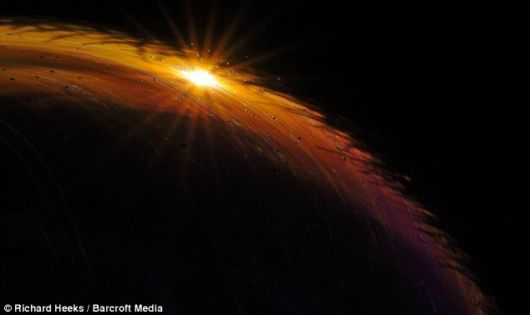 ‘Nuclear fires on planet bubble’: ‘I’m really pleased with some of these results. The close-ups show a different side to bubbles, with the surface textures’

Mr Heels takes his pictures in his back garden. Here his house can be seen reflected in the bubble

Writing on his Flickr photostream he added: ‘The lens is always in the centre of the bubble reflection. I find that reassuring for some reason. Life is rarely so simple.’

Mr Heeks takes his soapy shots with a Nikon D90, which retails at around £650. However, he warned anyone thinking of photographing bubbles to take care if using an optical viewfinder, as the reflected sun could potentially damage the retinas.