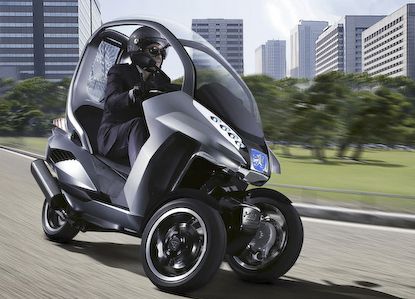 The BMW C1’s safety cage brought it an unprecedented level of crash safety. The Piaggio MP3’s two front wheels bring it unprecedented levels of stability. The Toyota Prius’s hybrid powertrain brings it unprecedented levels of fuel economy and low emissions. The new Peugeot Hymotion3 Compressor Concept — presented today at the Paris Motor Show — improves on the technology of all three to create the most stupefyingly high-tech scooter of all time. Of course, it does more than just adapt other people’s innovations. Did we mention it has three-wheel drive? 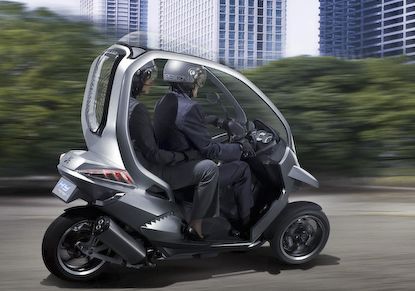 On the C1, riders were kept safe and dry inside a steel safety cage, but the passenger was left out in the cold — literally, the rider had heat vents — forced to ride behind the cage on a little jump seat. The HYmotion3 makes room for a passenger inside its safety cell; even incorporating natty grab handles into the integrated roll bars. 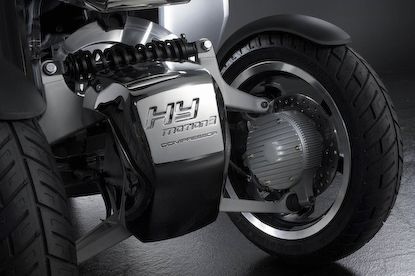 The Toyota Prius (and the Honda Insight before it) uses an electric/gasoline hybrid powertrain. The HYmotion3 does the same. Although here it’s only regenerative braking and not the engine, that recharges the batteries. It can still run in electric only mode at low speeds, just like the Prius, but unlike the Toyota, the Peugeot locates its electric motors inside the front wheels, meaning there are no packaging compromises. 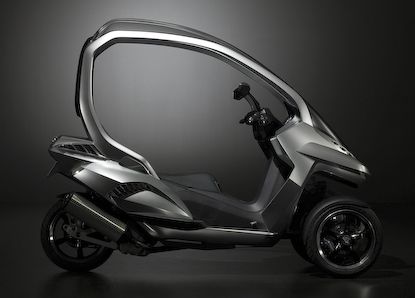 Those in-wheel electric motors, each capable of producing 4bhp, power the front wheels independently of each other and the gasoline driven rear wheel. Everything is kept in check by the ride-by-wire system. Where the MP3’s front wheels merely serve to eliminate the possibility of front-end washout and to improve braking distances, the HYmotion3 uses its to increase performance, allowing more power to be delivered to the road earlier in corners through all three wheels being driven simultaneously.

The main source of motivation is a supercharged 125cc engine with 20bhp (that’s a lot for a four-stroke 125). Combined with the electric motors, that means there’s a maximum of 29bhp on tap. This means the HYmotion3 has equivalent performance to 400cc rivals. Combine that with a stop/start engine that turns itself off when stationary and fires up instantaneously when it’s time to pull away and you have a machine that’s not only capable of out-cornering a traditional two-wheeled scooter in any weather while carrying two occupants in car-like safety, but one that’s able to do all of the above while delivering 118mpg. 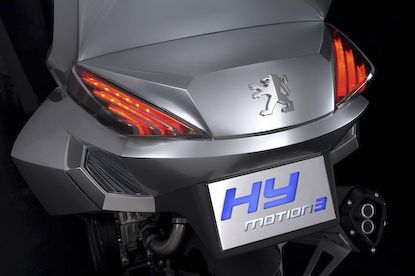 Right now the HYmotion3 is just a concept, but Peugeot is one of the biggest scooter makers in the world. Selling most of its machines in the European market, where there’s high demand for large, practical scooters and other fuel-efficient vehicles, the company is uniquely placed to bring a machine with the HYmotion3’s capability to production. Let’s hope it does so.