Is it the next big thing?

Tata Motors is taking giant strides and making history for itself. First the Landrover-Jaguar deal,
then the world’s cheapest car and now it is also set to introduce the car that runs on air, compressed air.
With spiraling fuel prices it is about time we heard some breakthrough!

The Air Car, called the MiniCAT could cost around Rs.139,700 at UDD3,000.00 in India and
would have a range of around 300 km between refuels.
The cost of a refill would be about Rs. 85 ($ 2).
The MiniCAT which is a simple, light urban car, with a tubular chassis that is glued not
welded and a body of fiberglass powered by compressed air. Microcontrollers are used in every
device in the car, so one tiny radio transmitter sends instructions to the lights, indicators etc.
There are no keys – just an access card which can be read by the car from your pocket. According to the designers,
it costs less than 50 rupees per 100Km (about a tenth that of a petrol car).
Its mileage is about double that of the most advanced electric car (200 to 300 km or 10 hours of driving),
a factor which makes a perfect choice in cities where the 80% of motorists drive at less than 60Km.
The car has a top speed of 105 kmph. Refilling the car will, once the market develops, take place at adapted
petrol stations to administer compressed air. In two or three minutes, and at a cost of approximately 100 rupees,
the car will be ready to go another 200-300 kilometers. 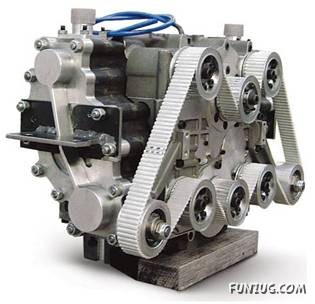 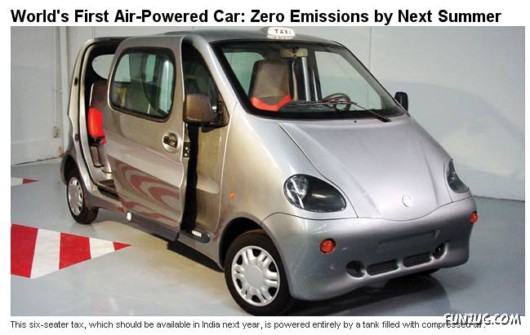 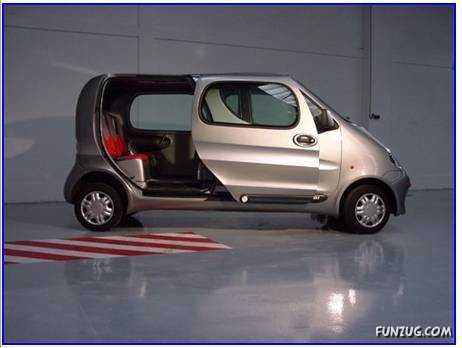 As a viable alternative, the car carries a small compressor which can be connected to the mains (220V or 380V) and
refill the tank in 3-4 hours. Due to the absence of combustion and, consequently, of residues,
changing the oil (1 litre of vegetable oil) is necessary only every 50,000Km).
The temperature of the clean air expelled by the exhaust pipe is between
0-15 degrees below zero, which makes it suitable for use by the internal air conditioning
system with no need for gases or loss of power.