Cars that are envisioned to meet the requirements of the gen-next, incorporating futuristic technology and features. 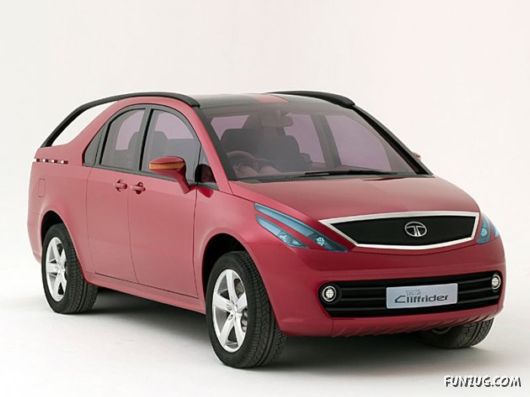 The Tata Cliffrider is derived from the Tata "Crossover" Concept, which was originally unveiled at the last Geneva Auto Show. Sporting a silhouette like a high-slung sedan, the Tata Cliffrider is a dynamic package that combines lifestyle and sporty usage with the practical functionality of a pick-up truck. 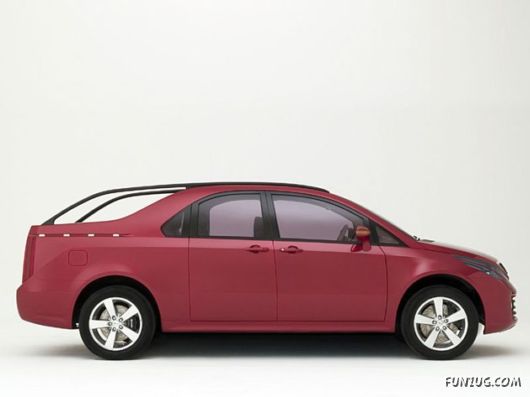 The Concept showcases Tata Motors’ idea of how a utility product could evolve in future for the discerning customer through a truly multi-purpose, multi-terrain usage of a car. 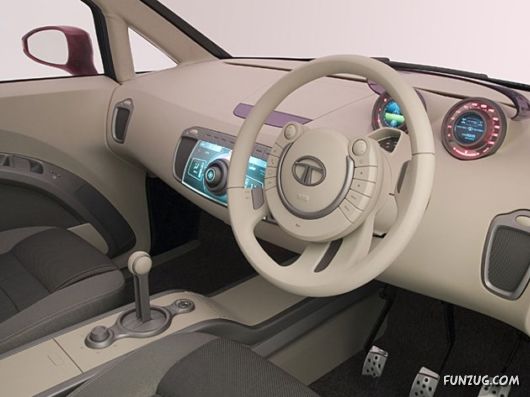 The exterior styling cues carry forward the visual theme of the Tata Crossover. The door trims show a continuity of form due to the disguised central pillar, with the front door hinged at its leading edge and the rear door at its trailing edge, allowing better access to the rear seats. 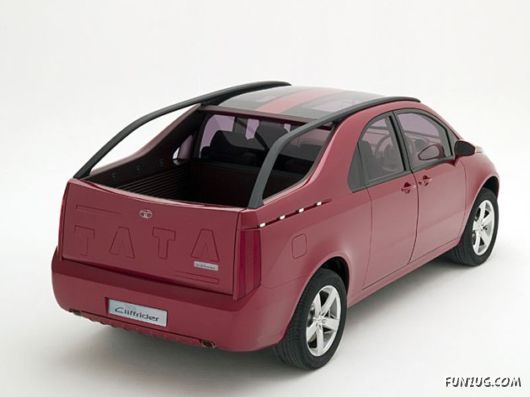 The interior emphasizes space and elegance with an innovative ventilation system and driver-oriented instrumentation stylishly packaged in the steering column. 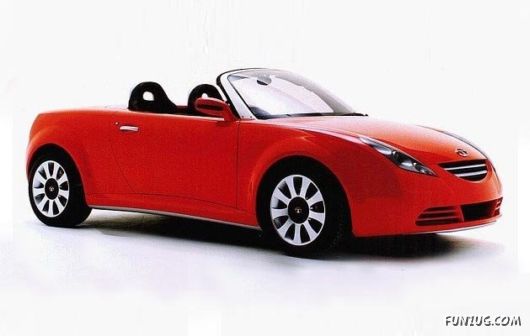 Tata Aria Roadster – Tata showcased in the year 2000 the concept of an exceedingly good looking roadster – a two seater coupe convertible – called the Tata Aria. The then Ms. World Yukta Mookhey, along with the Tata Group Chairman Ratan Tata did the honour of unveiling the Aria to the international press. Built on the same platform as the Tata Indica, The Tata Aria, proposed to be powered by a 140 hp engine 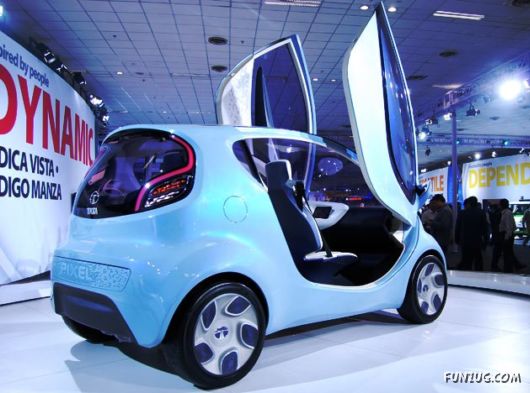 Tata Pixel – The Tata Pixel’s ability to manoeuvre and park in the tightest of spaces is made possible by its Zero Turn toroidal traction-drive Infinitely Variable Transmission (IVT), which assists rotation of the outer rear wheel forwards and the inner rear wheel backwards, while the front wheels turn at acute angles. The result is a turning circle radius of just 2.6 metres. The ‘scissor’ doors rotate upwards from the front to allow passengers to effortlessly enter or exit the Tata Pixel, even in the tightest of spaces. 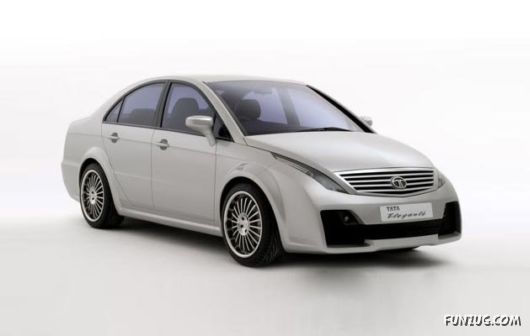 Tata Elegante – Tata Motors unveiled the Tata Elegante, a Sedan Concept based on all new platform, at the 77th Geneva Auto Show in the year 2007. The Tata Elegante, larger than the current Tata Indigo Sedan, is conceptualized to incorporate 4 cylinder transverse petrol and diesel engines from 1.4 litres through to 2 litres and a compact V6 petrol power unit. Common rail direct injection turbo diesel engines with variable valve timing and capabilities to comply with Euro V emissions norms will also be available. Power varies from 90 to 200 PS with torque of upto 280 Nm. Transmission options include 6 speed manual and automatic gearboxes. 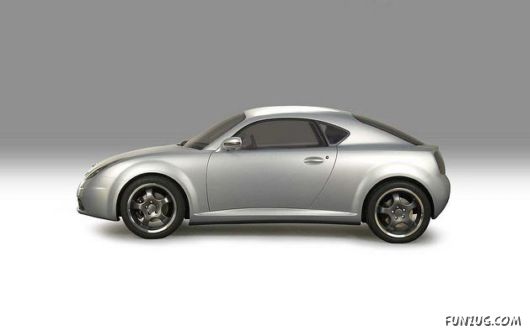 Tata Megapixel – Combining a lithium ion phosphate battery and an on-board petrol engine generator for recharging on the move, the Tata Megapixel offers a range of up to 900 km (with a single tank of fuel), path-breaking CO2 emission of just 22 gm / km and fuel economy of 100 km / litre (under battery only power). The at-home charging system is an as innovative induction charging system. The car has simply to be parked over the induction pad for charging to begin. 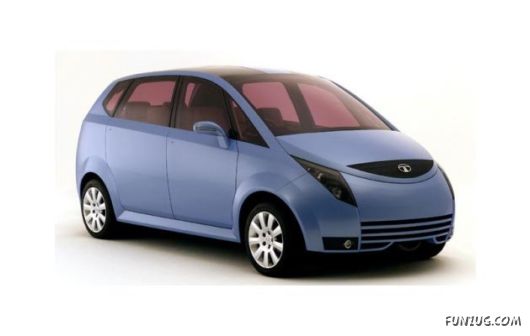 Tata Indiva – Tata Motors has unveiled a new 7-seater MPV concept in the year 2002. Built on the same platform as Tata’s B-segment offering, the Tata Indica, this MPV concept demonstrates the versatility of the Tata Indica platform. The Tata MPV, the Tata Indiva has been designed as a compact, space-efficient vehicle and is amongst the shortest 7-seater conceived with an overall length of just under 4.3 metres. It has a high seating position, which enhances passenger comfort, safety and visibility. The interior layout is flexible with the 3rd row of seats being removable which frees up interior space. Sporting 16" alloy wheels, it has been designed as a streamlined peoples’ carrier, which is more car-like with on-board electronic systems integrating high level of in-car entertainment, navigation and internet connectivity. The concept has a permanent sunroof and a headliner with LED lighting, which gives the interior an airy, spacious feeling. 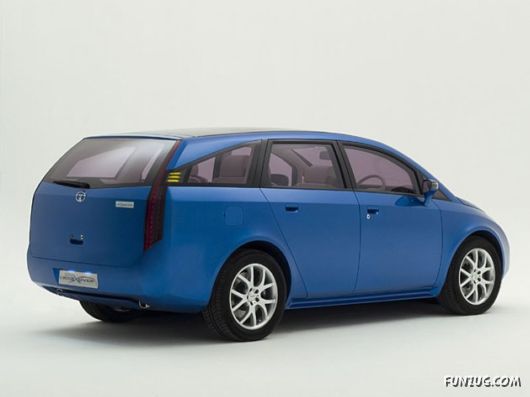 Long beam lights mounted on the roll bar and a load-body suited to carry mountain bikes, skis or snowboards re-inforce the "fun and adventure" image. It can also carry goods in the load tray which can be hidden from view as well as protected from weather conditions by a sliding cover. 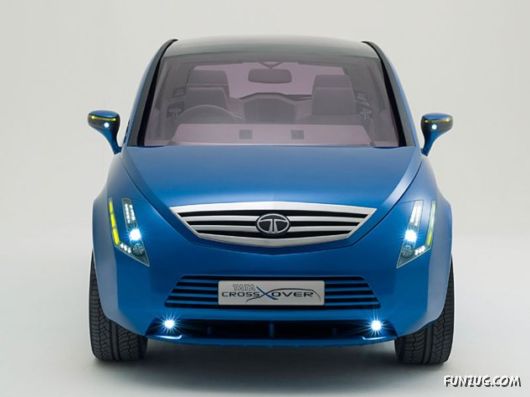 Configured to be fitted with a range of Euro IV engines including a V6 Petrol and next generation Common Rail diesel power trains, it would offer multiple airbags, ABS, Traction Control, Navigation Control and a host of other contemporary features. 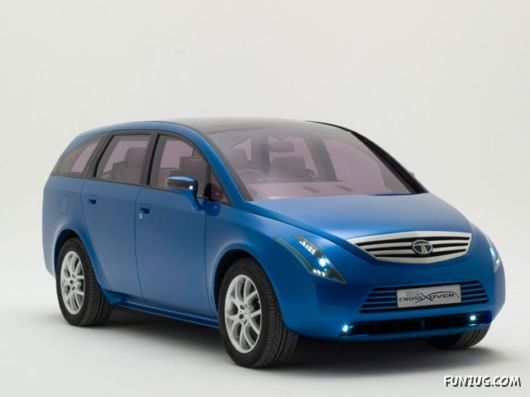