This is a compilation of the world’s worst & ugliest looking cars! This is a list of cars from all over the world, including some cars recently launched in India! 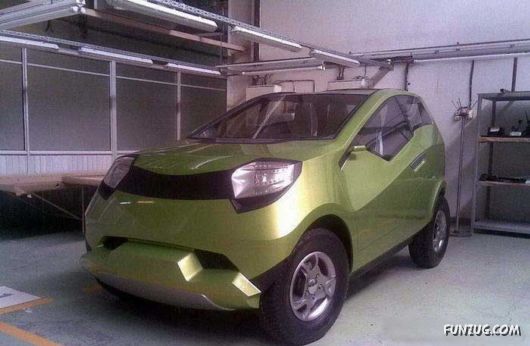 (this is the LADA, Russian SUV concept that we hope will never see the light of day – )

Unveiled in 2010, Tata Magic Iris may be a great and efficient vehicle for India (and may even one day replace the ubiquitous autorickshaw), but to our eyes it has very unbalanced shape… as though somebody kicked it in the back and sent it on its way, wobbling and bouncing along: 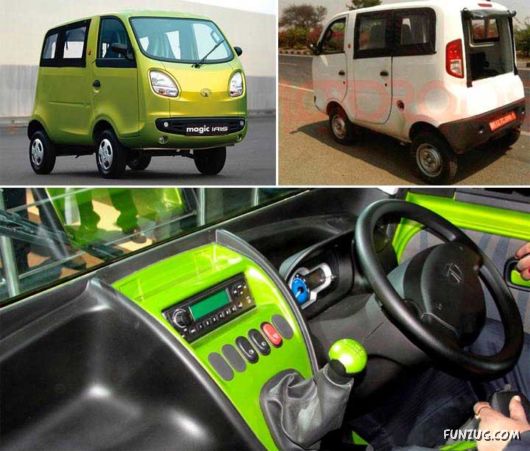 The Aurora monster was built in 1957 by an eccentric New York priest trying to make the ultimate safety vehicle. Clearly, this design was not graced by the hand of God: only one prototype was produced, and it broke down 15 times on the way to the press conference, requiring towing to 7 different garages (more info, and images at Gatsby Magazine):

Safari Car (left) and 1968 Ostentatienne Opera Sedan, made by Mohs Automobile – no side doors here; entry is only from the rear door, what a bright idea:

Measuring more than 20 ft in length, Milton Reeves? barmy behemoth had 8 wheels and received zero customer orders when it went on display at the inaugural Indianapolis 500. Unable to realize that 4 wheels was the future of automobiles, Reeves made a 6 wheeled SexAuto the following year, which was another flop. Imagine the length of congestion lines today if 8 wheels had caught on as a design concept! 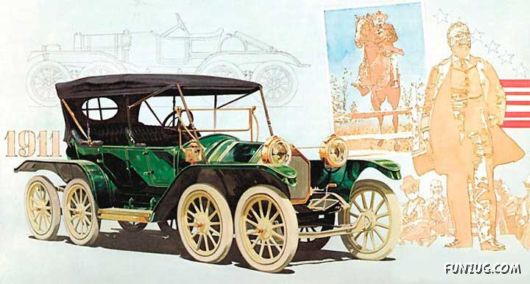 Not really a car but some sort of a bike / cart hybrid, this two-wheeled 3,200-lb monstrosity was built in 1913 and was powered by the very first V8 engine that was made in Detroit. Check out the huge external radiator, made from the shiny copper tubes… The Scribbs-Bah…Bi…Whatever… even comes equipped with the training wheels! 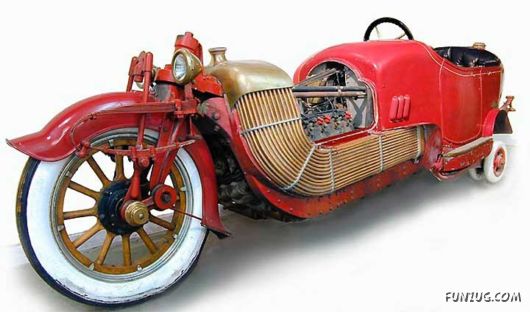 A similar two-wheeled (or somewhat three-wheeled) "thing" was manufactured from 1925-1928 in France from a design by the Mauser company (better known for guns) and called a "Monotrace": 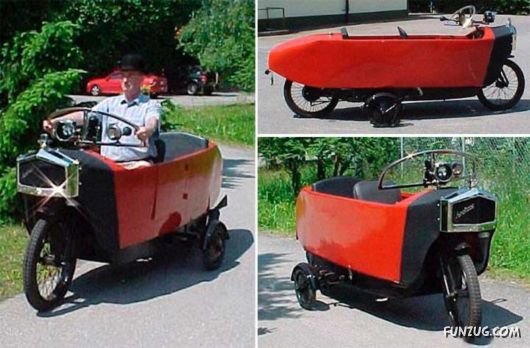 (images , see the restored Monotrace there!)

Aiming to provide a cheap kit car every household could afford, Midget Motors Corporation put together the King Midget package, containing an instruction manual, axles, chassis, steering system, springs and patterned schematics for the sheet metal. Able to accept all one cylinder engines, the King Midget was bargain basement design at its worst and later models were discontinued with stricter safety and emissions regulations.

To say that King’s dashboard was simple is an understatement (left), and to our eye, this vehicle looks better and more interesting when totally rusted:

Even Uglier: The Town Shopper

Made by Carter Motor Corporation in California in 1950: 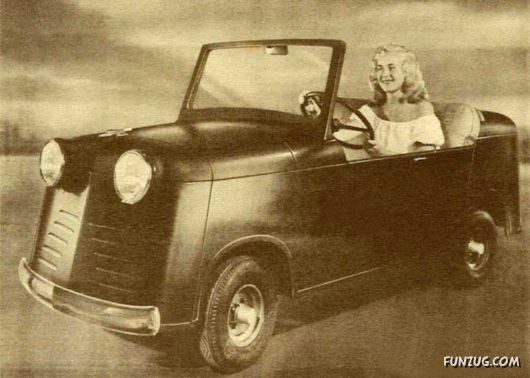 Renault Dauphine (1956): considered by many to be "the Slowest Car of All Time"

Proof that no one ever lost money underestimating the intelligence and taste of the general public, the Renault Dauphine sold very well, over 2 million units globally. Not bad, considering it was a cheap heap of junk with no identifiable redeeming feature other than what the scrap merchant ultimately offered for it. A continental bad joke, the Dauphine possessed the glacial acceleration (able to reach 60 mph from start in "only" 32 seconds) and was so prone to rusting that one hard winter could corrode the front wings into sieves.

People were saying that "if you stood beside it, you could actually hear it rusting". Imagine how criminals rejoiced when French police was outfitted with Dauphines! And yet it even was used in car racing:

The actual shape of Renault Dauphine is not that bad-looking, and holds nostalgic value for many people. The idea behind this car was to provide modest transportation to many working families in a post-war recovery France. It did just that, but barely, providing people with many hilarious memories, and earning itself a place in many "worst cars" lists.
Zunndapp Janus (1958): better not to look where it’s going…

When the Janus was unveiled industry experts weren?t two-faced with their reaction, they all openly agreed it was terrible. Equipped with a 250-cc engine and boasting a maximum speed of 50 mph, the Janus proved that motorbike manufacturers shouldn?t meddle in the motorcar market. Hilariously, the back seats were rear-facing so the red-faced passengers could watch congestion build up behind them while being serenaded with an irate cacophony of car horns.

The dashboard was no less hilarious:

Amphicar (1961): equally bad on the road and in the water

There was a certain sinking feeling about this bizarre concept car, seemingly thought up by a drunk car designer who had watched far too many Bond films. Able to drive on land and ride on water, the Amphicar wasn?t watertight and therefore only floated for as long as a pump held out or passengers could bucket the rising flood overboard. With a top speed of 7 mph when on water, consumers decided to keep their cars and boats as separate vehicles. 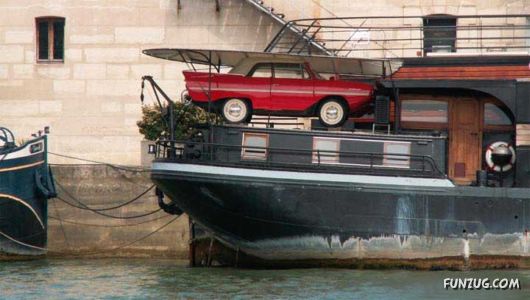 Peel Trident (1966): you’ll be so hot, your skin will start peeling off

A woeful attempt to make a futuristic car (though it is rather neat looking, in a soap box sort of way), the Peel Trident was made on the Isle of Wight and was basically a go-kart with a ludicrously heavy bubble-like chassis. Slow and cumbersome, the Peel Trident was quickly laughed off the road, particularly as the plastic dome threatened to cook the passengers under the harsh gaze of the sun.

The Bond Bug (1970): Ask Sean Connery what he thinks about this

No relation to Agent 007, and ugly as sin, the Bond Bug was a two seated sports car with three wheels which had a short production run of four years, during which the guffaws from car critics resounded loudly. The bright orange body paint made it look like a satsuma on wheels and the price was ridiculously high for such a small oddball of a vehicle that fared poorly when compared with the iconic and cheaper Mini.

See other super-small vehicles in our Smallest Cars series. One advantage of their size, of course, is that you can transport them on the flat bed of your truck: 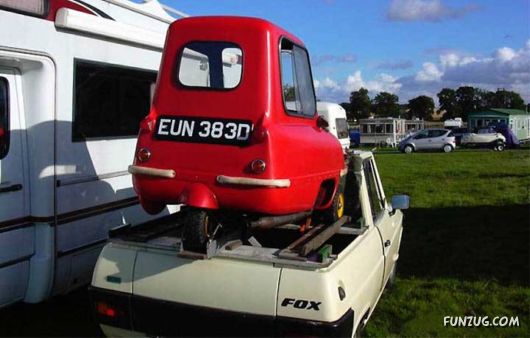 Surely this ugly duckling should be applauded for being an early attempt at introducing an electric car on to the motor market? No, it looked like the mismanaged mix of a golf-cart and a garden shed. Made as a response to the 70s fuel crisis, the Sebring-Vanguard CitiCar placed the reputation of car design and manufacturing itself in jeopardy with its unpopular box-like body. Its production run ran for four years.

Miserably-shaped 1965 Citroen Ami (designed by an Italian sculptor, it has an eclectic, perhaps too eclectic shape – which still looks like parts badly put together):

A kit car, but no less crime against any design sense ("a dash of Corvette, the headlights from a Cougar, tail lights from a Vauxhall, powered by a VW engine"), more info:

The 1977 Volkswagen prototype by Luigi Colani (definitely not the high point in the career of the master): 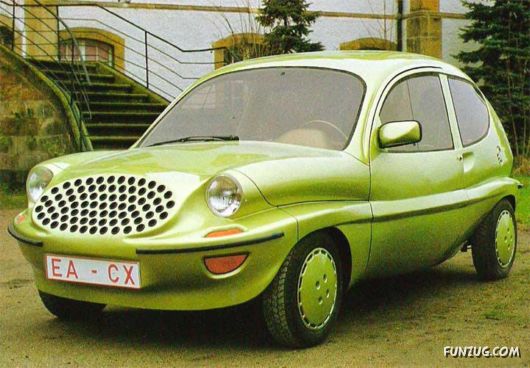 Fiat Multipla (1998): this is ugly beyond reasonable level of ugliness

Proof that looks do matter, the Fiat Multipla is an ugly beast that had drivers staying away in droves. Less aesthetically pleasing than a proboscis monkey, Fiat trumpeted its excellence as a family carrier, while families pointed out they wouldn?t be seen dead in it. Given the advancements made in car design over the decades, how on Earth did the schematics for the Multipla ever get used for anything other than a practical joke?

(the ugly dog on the right )

Another Fiat, this time called "Doblo" (left), and a weird Australian item (a Lightburn Zeta?):

What is this?? A customized Tato Nano, that’s what: 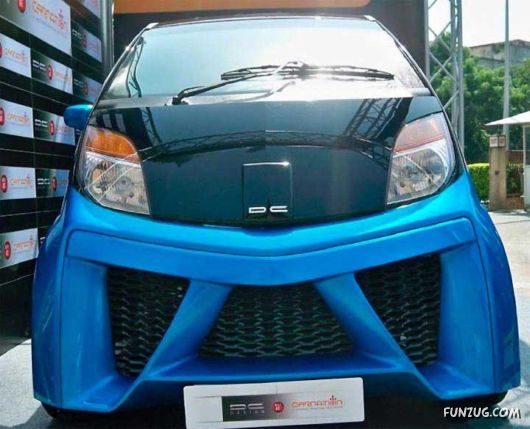 Fiat Aquila concept (left) and a custom abomination from the 2007 Tokyo Auto Show:

Here is a truly outrageous-looking concept car, the recent 2010 Sbarro Autobau – more info. It may look like it’s got teeth and preparing to eat you for breakfast. It also looks like it’s been hastily put together from LEGO blocks by a 4-year old. But in any case, the future is here and looks as yellow as it can possibly be. 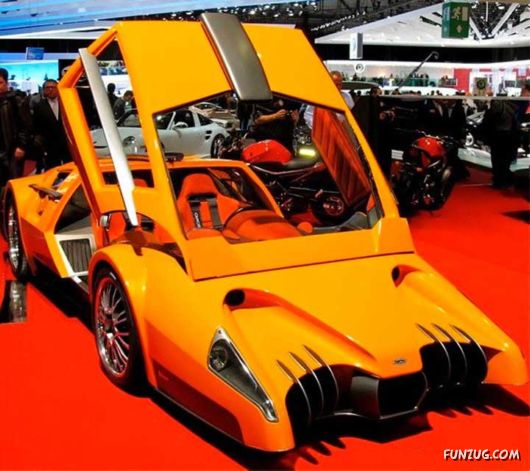 Well, my eyes hurt now from all this ugliness; gotta get some eye-bleach. Stay tuned for the next part in this series! 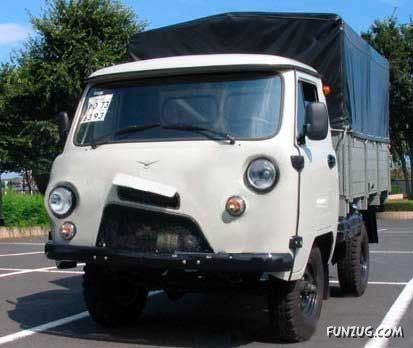