When billionaires and millionaires already have everything, anything your heart desires, occurs is the time to buy your own island.
I suggest you read the 10 most interesting private islands in the world. Note: For ease of reading area of the islands was measured in football fields.
In the area of a football field derived values? of 10 800 square meters – maximum allowable area of the norms FIFA. 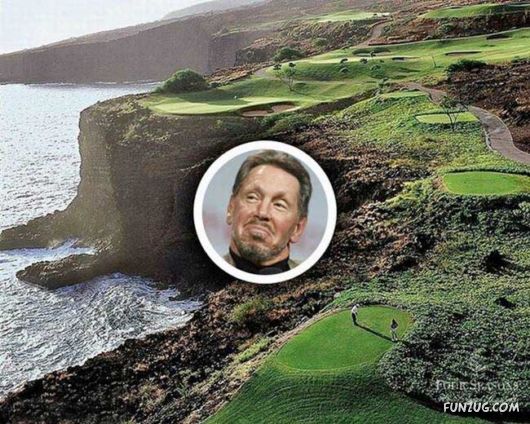 Cost: $ 500-600 million
Area: 39,000 football fields
Use: tourist industry
Location: Hawaii (USA), Pacific Ocean. Executive Director, Oracle CEO Larry Ellison loves the good life. Why are only $ 100 million, attached to them in winning the America’s Cup regatta or yacht Rising Sun which is but it is rumored to have sold for $ 300 million Now, Allison seems to have broken the record, having bought Lanai – one of the most expensive private islands in the history of (However, for a person with a fortune of $ 36 billion is mere pennies). The purchase price 98% of the island has not been disclosed, but observers estimate the value of a piece of land with two prestigious resorts and golf courses in the half-billion dollars. 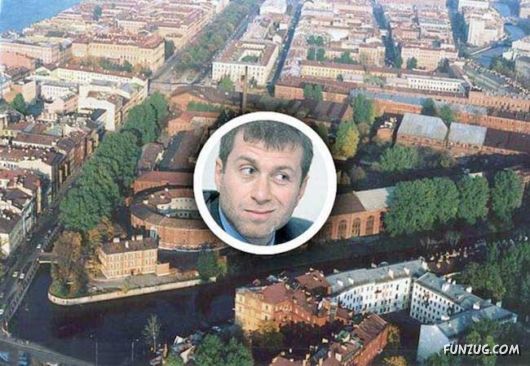 The artificial island of New Holland appeared between the Moika River in the era of Peter I after construction. Until the 2000s, it housed warehouses of the Leningrad Naval Base. In 2004, the Ministry of Defence handed over the island city two years later won the competition for the reconstruction of the company Shalva Chigirinsky and Igor Kesaev. Partners plan to invest $ 1 billion in the island, but their plans to prevent financial difficulties. In autumn 2010 to re-contest won by Roman Abramovich, LLC "New Holland Development", which has committed to invest in the reconstruction of 12 billion rubles ($ 365 million at current exchange rates) until 2017. Investors are going to build an area of ?7.8 hectares of museums, exhibition centers, cultural centers, and restore thearchitectural appearance of the "New Holland". This island can not be considered complete private ownership of Abramovich yet almost everyone is not built it, will belong to his company. Under the agreement with the City, after the project developer will be required to convey to the city utilities and two bridges to the island.
Active participation in the project takes the well-known patron of modern art, a close friend of Abramovich, Daria Zhukova, whose name is also associated with the now-defunct cultural center of the "garage" and an updated Gorky Park in Moscow. Partly because of the media dubbed the New Holland "Mecca of St. Petersburg hipsters. 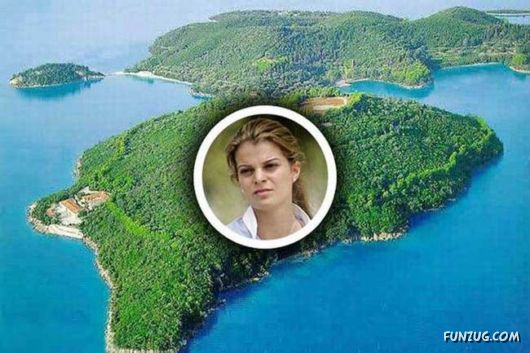 Cost: $ 125-200 million
Area: 12 football fields
Usage: Leisure Owners
Location: Ionian Sea, Greece Greek Aristotle Onassis may be called trendsetters in fashion for the purchase of the islands.
The rich owner purchased the island Skorpios just east of Lefkada Greece back in 1963.
Five years later he became a place of marriage of Onassis and Jacqueline Kennedy – widow of the 35th U.S. President John F. Kennedy. Currently, the island belongs to the granddaughter of Greek tycoon Athena Onassis. According to rumors, the owner appears there is quite rare,
and the island may be for sale. Among the potential buyers at different times, called the Emir of Qatar, Roman Abramovich, Microsoft owner Bill Gates, Madonna and fashion designer Giorgio Armani. None of them, apparently, have not yet bought ScorpiosThis is not surprising: according to various estimates, the cost of the island ranges from $ 125 million to $ 200 million 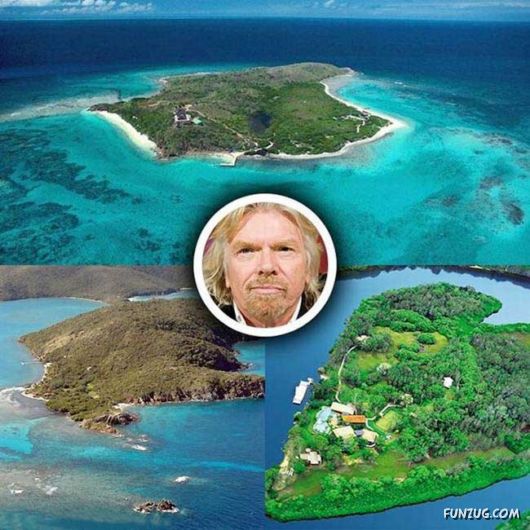 The total cost of purchasing and investment: more than $ 120 million
The total area of ??84 football fields
Use: tourist industry
Location: Mosquito and Necker Island – British Virgin Islands, Karbiskoe sea Makepeace Island – Australia 61-year-old founder of Virgin’s Richard Branson bought his first island – Necker – when he was 28.Currently, the island is open to visitors. In addition, there is the personal residence of Branson and his family. In 2011, the villa extravagant entrepreneur, he has to date invested about $ 100 million, were destroyed by the hurricane. The owner took the loss philosophically – as an opportunity to build a new, even better than the last. In 2003, Branson purchased Makepeace tiny island in Australia, which is shaped like a heart. It was planned that there will be a rest employees Virgin, but now the island is accessible to the public (A company of 22 people renting will cost up to $ 17,000 per night). In 2007, the entrepreneur has acquired Mosquito Island in the vicinity of Necker, which set out to equip the "eco-resort" with 20 villas and a restaurant, which feed exclusively from solar and wind energy. The island is home to rare species of lizards – geckos dwarf. Also, the businessman said the plans provide far lemurs who are languishing in captivity at the "Big Land" – an initiative that criticized a number of environmentalists. 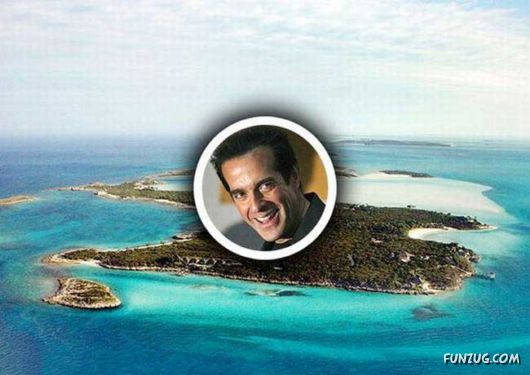 The cost of purchase: $ 50-65 million
The total area of ??187 football fields
Use: tourist industry
Location: The Bahamas, Atlantic Ocean The richest of the planet illusionist David Copperfield bought four islands in the Exuma Ridge in 2006.
Place of purchase chosen by chance: Copperfield says that before buying, he traced the two lines connecting the locations of the four wonders of the world – the Pyramid of the Sun in Mexico, the Egyptian pyramids at Giza, Stonehenge and the stone statues on Easter Island. And (a miracle!) At the intersection of two lines was the prestigious resort of Mary Kay, where at one time stayed TV host Oprah Winfrey and singer Robin Williams. In one of the islands discovered Copperfield "fountain of youth" water which, according to the owner, are able to return to the life of dried leaves and half-dead insects.
Ravings of a madman? A publicity stunt? Check it out – rent the island will cost you about $ 400,000 a week. 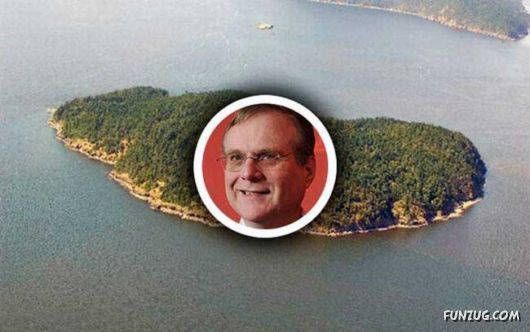 Cost: $ 13.5 million
The area of ??109 football fields
Usage: investment
Location: Washington, USA
Kofaunder Microsoft Paul Allen, whose fortune is estimated by Forbes in $ 14 billion, bought the island 20 years ago, Allan. With all due respect to the merits of Allen’s worth noting that the island was named after the hero of the American fleet, not IT-industry gurus, as you might think. Currently, the island is virtually built up, there is not even electricity. Buy a piece of land in the middle of the sea is much easier than to sell.
Allen is trying to get rid of the island’s namesake, the middle zero, when it was put up for sale for $ 25 million The crisis has tempered the appetite of the owner: Now for Allan asked twice smaller amount – $ 13.5 million 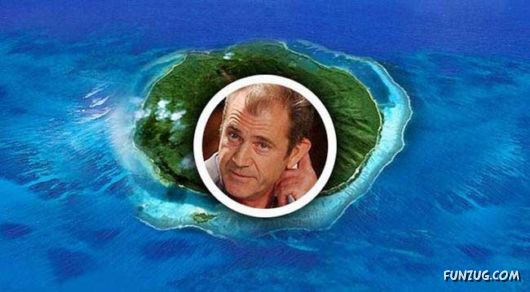 Gibson bought one of the largest private island in the world of the Japanese Tokyu Corporation. Local residents were against the deal, but their opinion is not taken into account. Judging by the images from the satellite in the Google Maps, most of the island is covered with forests and built up. 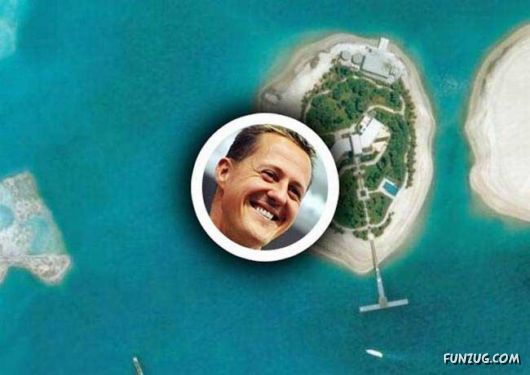 Cost: $ 7 million
Area: 2 football fields
Usage: Leisure holder
Location: The World Islands, Dubai
In October 2006 ended the era in the history of "Formula 1" – the legendary racing driver Michael Schumacher ended his career.
Perhaps the most original gift he received from the UAE Crown Prince Sheikh Mohammed bin Rashid Al Maktoum. He gave Schumacher an artificial island in the archipelago of The World, which follows the shape of a world map.

Island, where the couple Schumacher spends the days of well-deserved retirement, this map is located in Antarctica. "To get there you can only boat or helicopter. Perhaps he will build a race track out there to practice karting, – said the manager immediately racer after receiving a valuable gift.

The cost of purchase: $ 3.6 million
Area: 13 football fields
Usage: Leisure holder
Location: The Bahamas, Atlantic Ocean
Actor Johnny Depp bought Little Island Pond Cay Halls after the first "Pirates of the Caribbean" (2003), that collected around the world more than $ 650 million Island is located 60 miles south of Nassau and Depp can do favorite snorkeling (snorkelling for breath) away from the madding crowd. 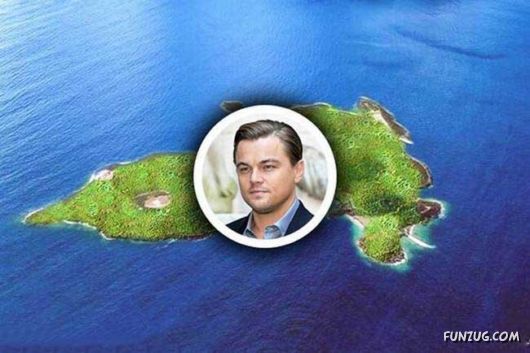 The cost of purchase: $ 1.75 million
Area: 39 football fields
Use: Development
Location: Belize, Caribbean Sea Name the actor Leonardo DiCaprio have starred in "The Beach" and Titanic, so his love of the sea is not surprising.

In 2005, DiCaprio has earned enough to buy an island Blekador Kay. In 2007, the actor announced plans to build there is eco-friendly hotels Class "luxury brand Four Seasons. Based on the information in open sources, the project "Green Hotel" remains incomplete, the investments in it are estimated at $ 30 million 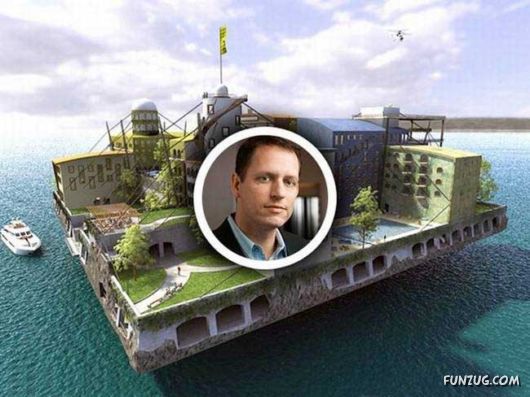 Investment: $ 1,250,000
Total area: not available
Use: the creation of micro-
Location: Neutral Water
The founder of PayPal, in its time gave the team $ 500,000 Mark Zuckerberg on Facebook, Peter Thiel always had original ideas. For example, a billionaire, has launched a project that helps talented high school graduates to start their own businesses, bypassing college. From 2008 Till finances Seasteading Institute (Institute of Marine settlements), which deals with the problem of creating micro on artificial islands, living in accordance with the ideology of libertarianism. Platform will be built in areas of the world’s oceans, is not subject to the jurisdiction of traditional nations. The laws in these islands will be approximately as follows: No sotspodderzhki, as a free building codes, the absence of the lower threshold of wages and minimal restrictions on the carrying of weapons. By 2050, the "sea settlement plan to recruit up to several millions of citizens, which will require the construction of more than 40 000 platforms that can accommodate 270 people.