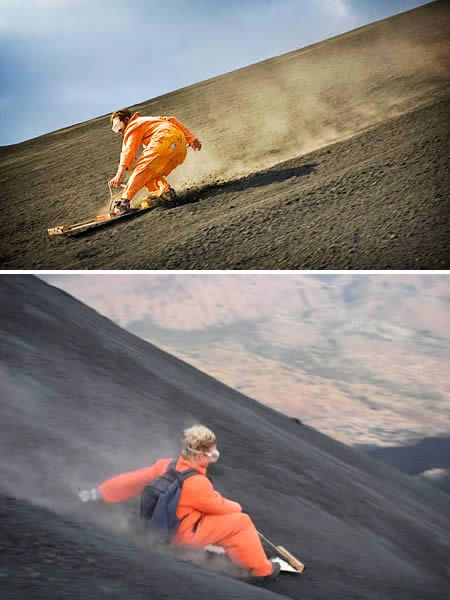 Racing down an active 2,380 ft volcano at speeds of 50 mph with only a board for protection is considered by many thrill-seeking sports fanatics as the coolest sport around.

Thousands of travelers head to the foothills of Nicaragua’s Cerro Negro mountain every year to take part in the new sporting craze. Surfers, dressed in protective jump suits, knee-pads and helmets, can reach speeds of up to 80 km/h (50mph) on their specially-constructed plywood boards. Since its creation, in 2005, the volcano boarding has attracted more than 10,000 participants. 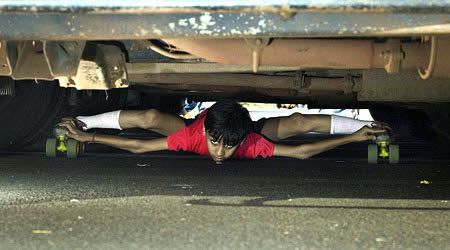 For what may appear to be near-impossible, limbo-skating ? roller skating under cars ? is the latest rage in India, requiring the flexibility, strength and balance of a gymnast. Wonder-kid Aniket Chindak holds the unofficial world record for ?limbo-skating’ beneath 57 cars. 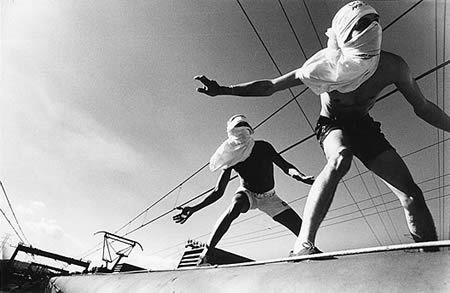 Usually an illegal sport, train surfing involves riders climbing or "surfing" on the outside of a moving train or subway. The practice is a serious issue in South Africa, where many young people have been killed or injured. The ‘sport’ was made popular in the 1980s in Germany, where it was called "S-Bahn Surfing". The phenomenon was then forgotten, but in 2005 it was rediscovered by a gang from Frankfurt, Germany. The leader of the crew who called himself "The Trainrider" famously surfed the InterCityExpress, the fastest train in Germany. 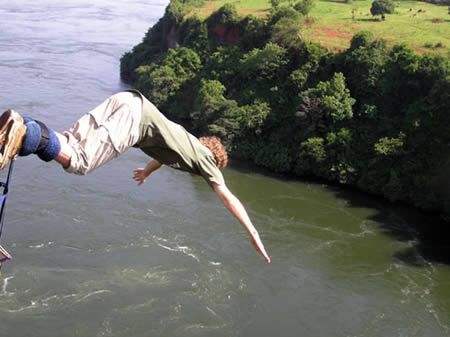 Feeling jaded by garden-variety bungee jumping? You might consider imitating how these Aussies spice up the sport: bungee jumping into a body of water containing live crocodiles. 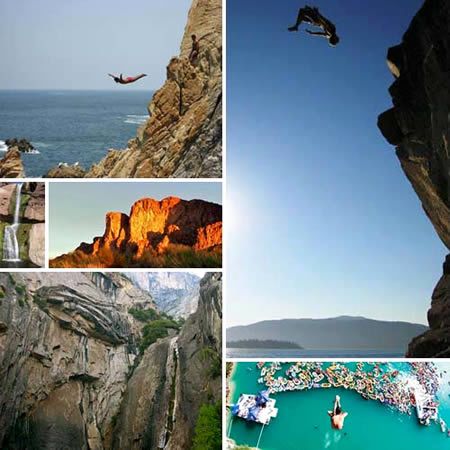 Adding a new dimension to the sport of diving, cliff diving is defined as the acrobatic perfection of diving into water from a high cliff. Braving the rough rocks, divers take a plunge in the hard-hitting water beneath to experience a thrill to last for a lifetime.

This dangerous sport originated from the Hawaiian Island of Lana´i in 1770. Kahekili, the king, demanded that his men leap off high cliffs and enter the water feet first without a splash, to prove their courage and loyalty. Today, after centuries, the activity has expanded into a sport that is marked by immense courage, focus, thrill and risk.

Cliff diving is one of the riskier kinds of diving; hence, extreme caution is a must. To the benefit of the divers, certain standards have been set to minimize the risk factor. Some of these include determining the height of the jump (23 ? 28 meters for men, 18 ? 23 meters for women), an ideal entering speed of 75 ? 100 km/h, and a free fall time of 3 seconds.

This is an up-and-coming extreme sport where you wear these things on your feet that are sort of a cross between low stilts and pogo sticks. The idea is to do stunts with them. It sounds a little boring until you see it. 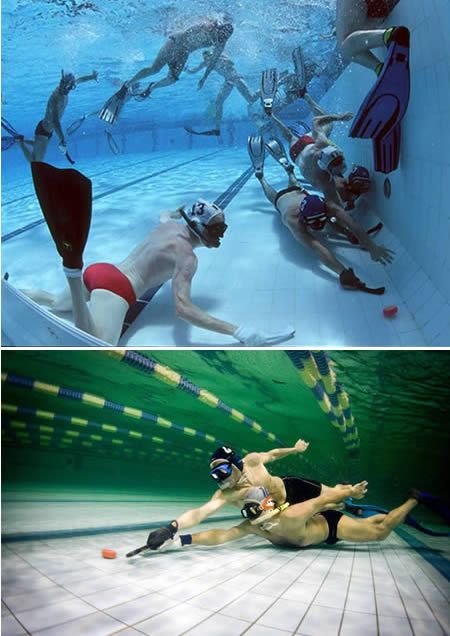 A little known sport, underwater hockey is what some divers like to do during the winter months when the outside water is too cold for diving. The sport was invented in Great Britain during the 1950’s when some British divers were looking for ways to stay fit during the winter.

The game is played using nothing more than snorkeling equipment – and of course the stick, protective gear and gloves – which adds breathing as an important game factor, meaning players have to manage the oxygen in their body. The game is played at the bottom of the pool using a puck weighing over one kilogram. The sport is tough and tiring though it is not as bad for experienced divers capable of holding their breath for extensive periods of time. The sport is becoming increasingly popular around the world and some countries have formed national teams which take part in world championships. 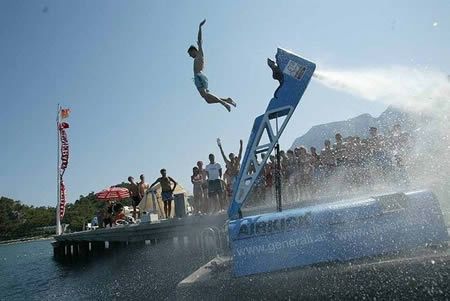 In this strange extreme sport, a human catapult launches individuals over 26 feet in the air into a swimming pool or foam pit. AirKick works propeling participants through the air in a pre-calculated parabolic trajectory using a special combination of air pressure and water recoil technology. The participant sits in a specially constructed seat at the back end of the catapult arm and 3,2,1?liftoff! The participant himself sets the device in motion by pushing a button. Approximately 60 Liters of water are then forced through a rocket nozzle under the seat. This pressurized water (8 to 10 bar of air pressure) propels the participant 8 meters (26 ft) though the air for a cool and refreshing splash down in a swimming pool. 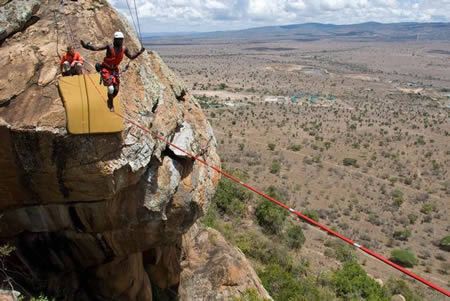 A balance sport, Slacklining utilizes nylon webbing stretched tight between two anchor points. It is distinct from tightrope walking in that the line is not held rigidly taut ? it is instead dynamic, stretching and bouncing like a large rubber band. The line’s tension can be adjusted to suit the performer and different types of dynamic webbing can be used to achieve a variety of feats. The line itself is flat, due to the nature of webbing, therefore keeping the slacker’s footing from rolling as would be the case with an ordinary rope. The dynamic nature of the line allows for imposing tricks and stunts.

Christian Schou holds the Guinness World Record title for the highest slackline after crossins a Norwegian fjord in Kjerag, Norway at 3,280 feet (1000 meters) ? the equivalent of 3 Eiffel towers high. 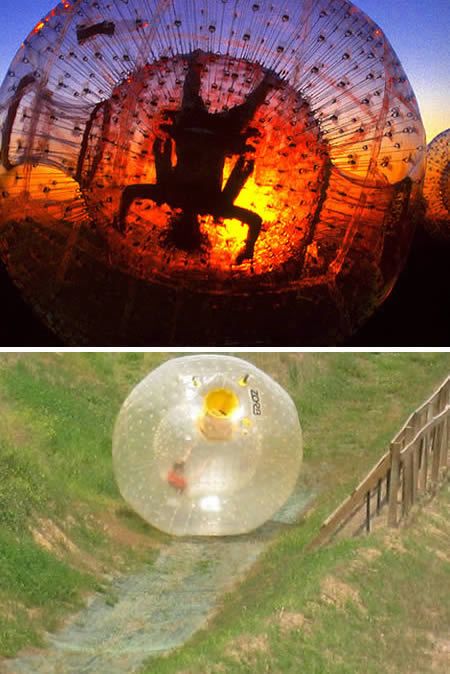 Effectively throwing yourself down a slope in a giant ball, or ?Zorbing?, is one of the latest extreme sport craze to sweep the world. This bizarre sport, invented in 2000, involves a giant plastic ball, which has two skins, one inside the other. The person zorbing is in the area between the skins, which is pumped up with air. The middle ball effectively suspends them on a cushion of air 700mm off the ground and the ball is then rolled down a hill.

Like a number of other extreme sports, such as bungee jumping, zorbing originated in New Zealand. There are two different ways to zorb – either harnessed inside the ball, or "hydrozorbing", which involves putting water in the ball, which zorbers can slide around on as it revolves.