These are photos from PiercedSmurf?s suspension wedding on April 20, 2007 in New Orleans. They’re sharing their love for each other and for body modification. 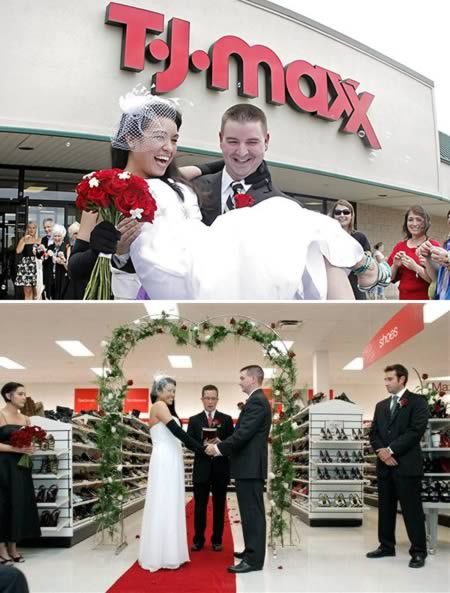 Lisa Satayut’s dream was to get married in the size 8 shoe aisle at T.J. Maxx for as long as she could remember. Calling it her "happy place," the "Maxxinista" and her fiance, Drew Ellis, were married while the Mt. Pleasant, Michigan store was still open for business. 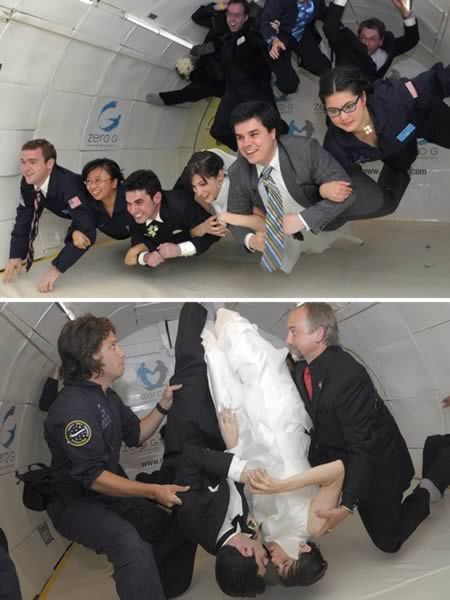 The bride wore white and earrings resembling tiny planets, the groom wore a tuxedo and cuff links shaped like spacecraft, and the wedding party attended in blue jumpsuits. New York City couple Erin Finnegan and Noah Fulmor floated into matrimony thousands of meters above the Gulf of Mexico in what organizers said was the world’s first zero gravity wedding.

The couple exchanged wedding vows and rings ? with some difficulty ? and fumbled their kiss while flying weightless inside the padded fuselage of a specially modified Boeing 727-200 aircraft, G-Force One, operated by ZERO-G, a company offering weightless flight experiences. 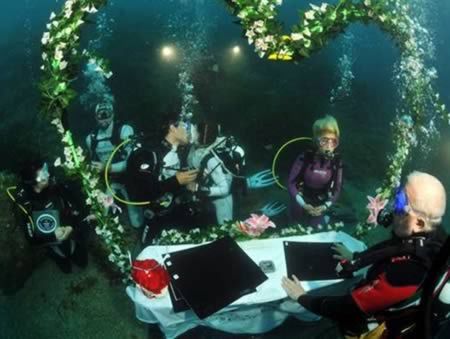 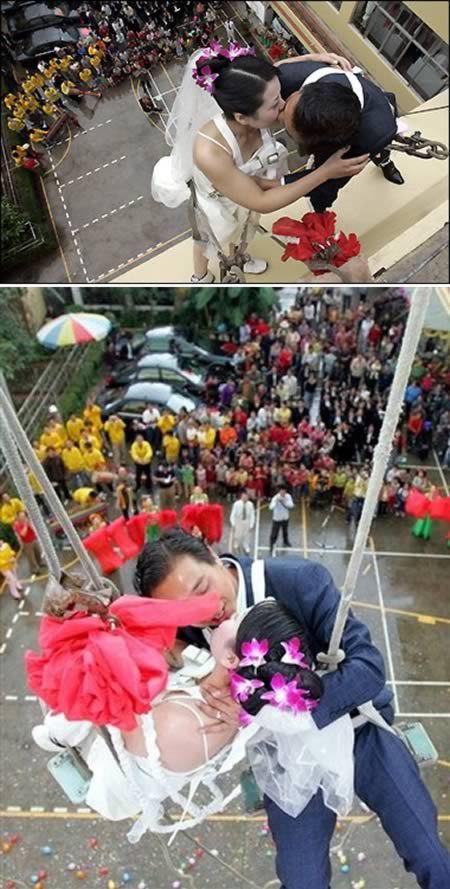 These newlyweds are joining the mile high club … in front of all their family and friends. Jiang Dezhang (R), 27, kisses his bride Tie Guangju, 26, while rappelling from a building during their wedding ceremony in Kunming, China.

These two lovebirds both work as exterior cleaners of tall buildings, so they decided to incorporate rappelling into their ceremony. Sure, because they don’t get enough of that on regular days. 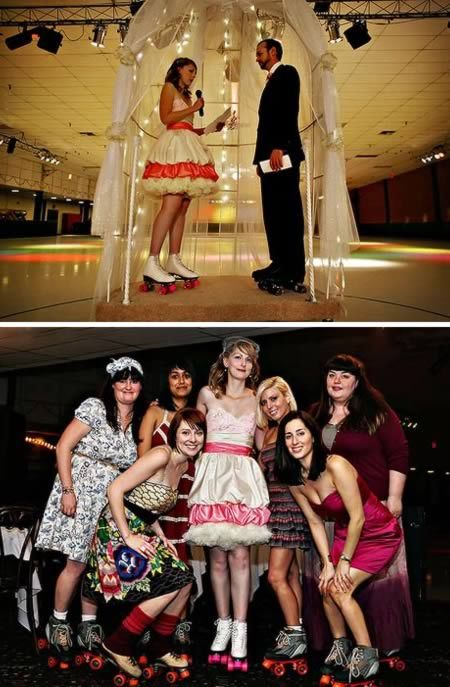 Who says that wedding gowns have to be white and traditional? Check out these fantastic photos of Liz and Dave’s roller skating-themed wedding by photographer Michelle Hayes. 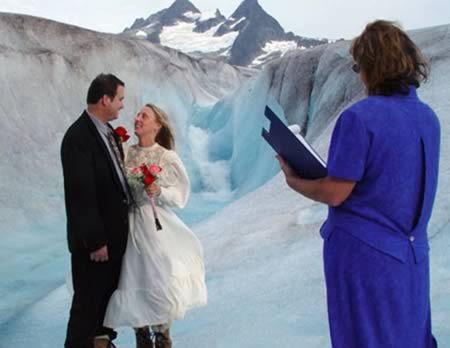 A bride and groom say "I do" on a frozen glacier just outside of Juneau, Alaska. Temperatures on the glacier are usually only about 10 to 15 degrees cooler than on land. We hope it leads to a warm marriage. (Courtesy of Diane Pearson) 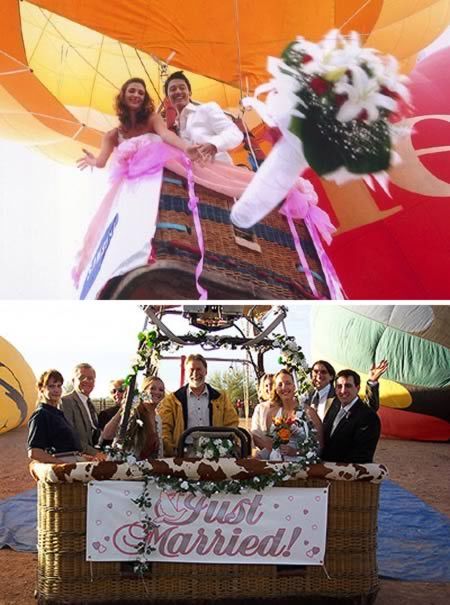 Mike Kijak has been flying hot air balloons through California’s Sonoma Valley for 15 years. Though the wedding party is limited to eight, the sky is the limit for hot air balloon weddings at Up and Away in Sonoma Valley. Owner Mike Kijak, center, pilots the balloon and performs the ceremony. "You would hear about it," he said of hot air balloon weddings. "It’s marriage proposals we’d see a lot of. Then one day someone asked, ‘Can you marry us?’ and I thought, ‘Sure, why not?’" So, Kijak looked into it and can now legally marry couples in the state of California. Of course, he’s also flying the balloon, so ceremonies stay relatively simple. 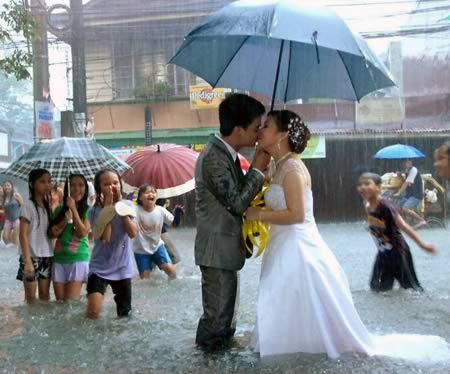 There are those who believe that a rainy wedding means good luck for the happy couple. If this is true, then Hernelie Ruazol and Ram Campo are in for a blessed marriage indeed?it didn’t just rain on their wedding, it poured and even flooded.

The couple’s sopping-wet wedding became Internet-famous as a post-nup photo of them kissing in ankle-deep flood water in their wedding garb made romantics swoon. The couple tied the knot inside the flooded San Antonio de Padua Parish Church in Singalong, Manila, at the height of the monsoon rains.

In the days leading up to the ceremony, the bride, a teacher at Epifanio de los Santos Elementary School, had begged the weather for a break on her special day. Obviously, the skies did not heed her appeals, but ultimately, Hernalie and Ram didn’t seem to mind. On the day of the wedding, the couple’s spirits seemed as relentless as the rain.

Their vow of "for better or worse" was tested much earlier than expected. Kissing in a rainy deluge, Hernelie and Ram appeared able to endure any future storms in their marriage. 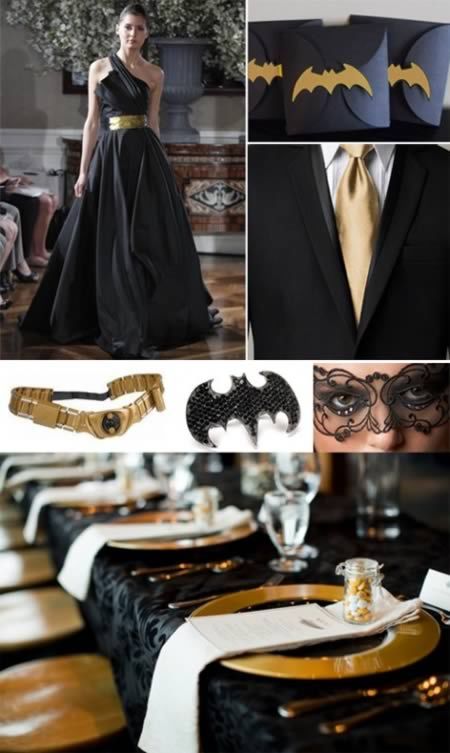 If you thought superhero weddings are generally too casual, here are some classy, stunning gold and black wedding ideas all based on having an elegant Batman wedding.