And you thought shaving stung! Man battle it out to see who can cultivate the biggest beard of BEES


Facial hair can be itchy and uncomfortable, but nothing quite compares to the beards several brave souls donned at Clovermead Adventure Farm near Ontario, Canada.
At the annual Clovermead Bee Beard Competition contestants heads and upper torsos are covered by ‘beards’ made up of thousands of the buzzing insects.
Now in its 9th year, contestants cover themselves in bees and then strut their insect facial fashions on the catwalk for gathered crowds. 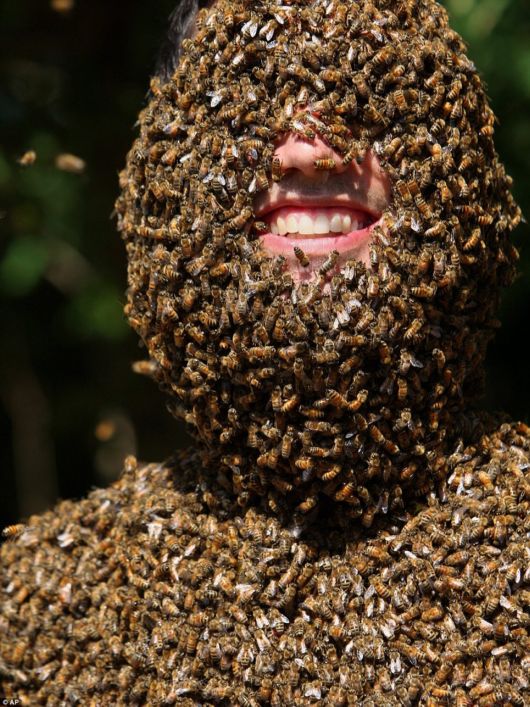 Patrick Boelsterli, a contestant in the annual Clovermead Adventure Farm’s Bee Beard Competition shows off his beard made up of the stinging insects The buzzing beards typically weigh for pounds each and are made up of approximately 13,000- 16,000 bees, according to the St. Thomas Times Journal.

To entice the swarms of honey bees to land contestants wear a queen bee in cage from around their neck, the Journal reports.
Bee keepers then help to brush on and shape the growing mass of insects into a ‘beard.’ 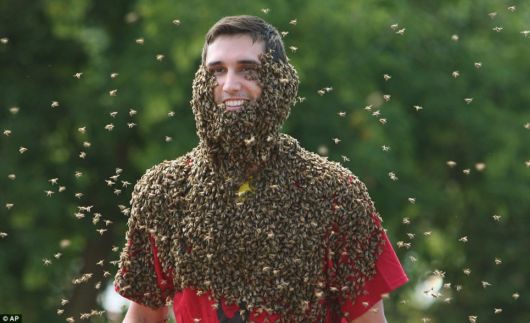 Bees swarm around Boelsterli as he adds to his living beard at the 9th annual competition in Ontario, Canada 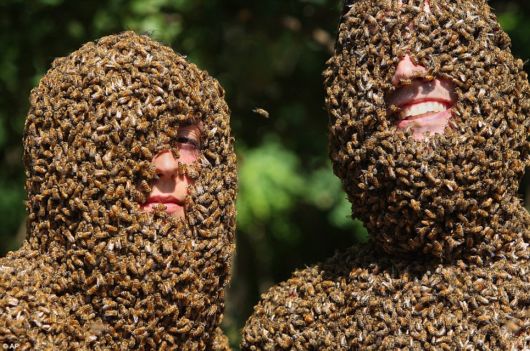 Marenda Schipper and Patrick Boelsterli model their bee beards that typically weigh 4 lbs and are made up of 13,000-16,000 bees Bees flock on to the contestants faces and upper torsos around their queen as the recognize and are drawn to her scent, the BBC reports.
Veteran competitors use petrolatum, a substance bees avoid, to help sculpt and ‘grow’ their bee beards into particular shapes, the news organization goes on to report.
In addition, to keep the participants from being stung the bee keepers keep the colonies well feed with sugar water and sedate the bees with smoke before letting them amass on the contestants. 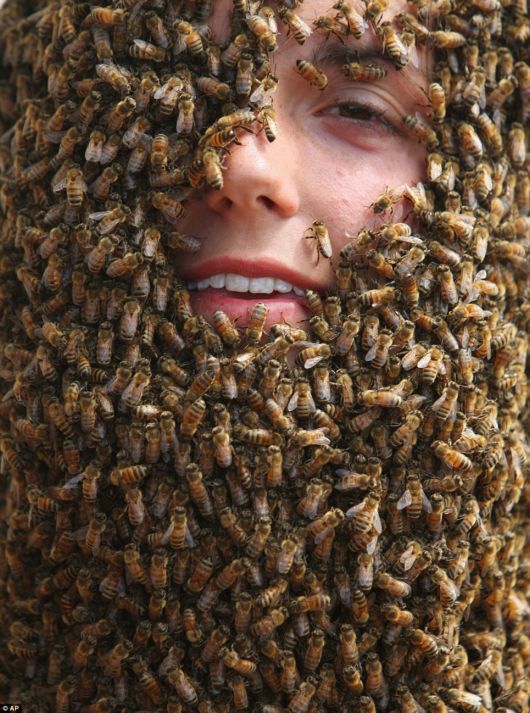 All smiles: University student Schipper smiles as thousands of bees cover most of her face To determine the weight of the beards judges weight the contestants before and after the bees collect on their face, according to the BBC.
It takes about 5,000 bees to weight a pound. Officials also judge the contestants based on the beard’s style and the performance each person puts on for the audience. In the past contestants on the catwalk have managed to hula hoop while covering by the stinging insects. 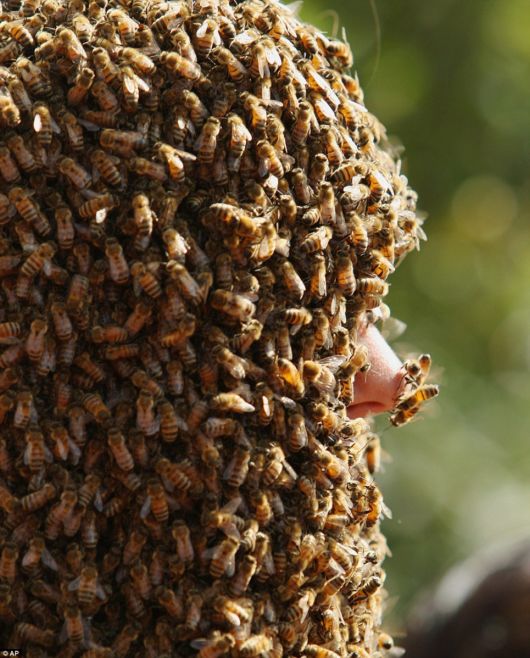 Covered: Only Schipper’s nose peeks out from under her bee beard as she competes in the Pioneer Games on Clovermead Farm This year’s competitiors included everyone from middle-aged adults to University students. The 2013 winner was Justin Hiemstra, who won for having the heaviest beard, according to Ruptly.com. Marenda Schipper was also recognized for her beard’s atheistic with the 2013 Judge’s Choice Award.