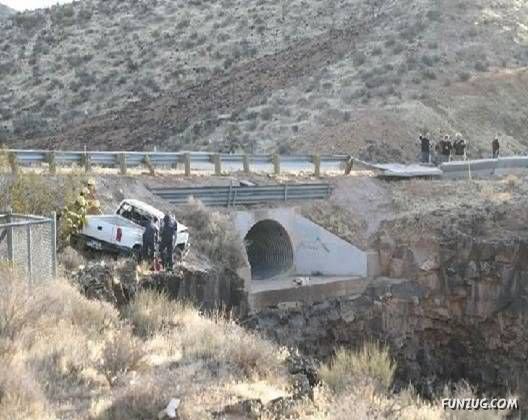 Look at the picture above and you can see where this driver broke through the guardrail, on the right side of the culvert, where the people are standing on the road, pointing. The pick-up was traveling about 75 mph from right to left when it crashed through the guardrail. It flipped end-over-end, bounced off and across the culvert outlet and landed right side up on the left side of the culvert, facing the opposite direction from which the driver was traveling.. The 22-year-old driver and his 18-year-old passenger were unhurt except for minor cuts and bruises.

Now look at the second picture below…

If this guy didn’t believe in GOD before, do you suppose he believes now? Share this your email family and friends. Let this be a reminder to all of us, GOD is controlling !