It is surely a recipe for disaster, but many Chinese motorists cannot resist the urge to pile their tricycles and trucks as high as they possibly can while they move their goods – and families – across town.

Seemingly relaxed, these pictures show drivers on Chinese roads going about their daily business with alarming volumes of precarious cargo tottering above their heads.

These motorists give the term "wide load" a whole new meaning. 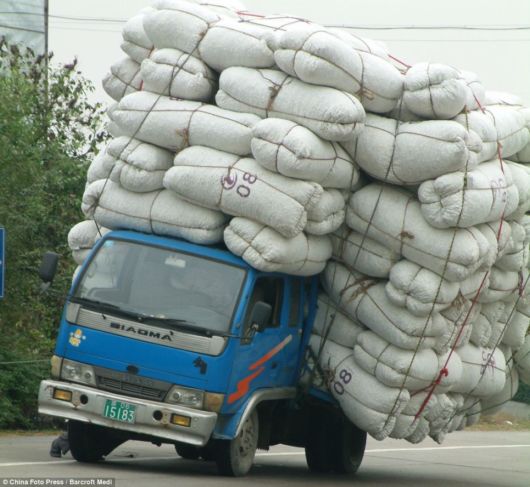 Cushioned landing: This truck is clearly battling with its load as it veers along a national highway in Hai’an, China but it looks as though it would have a soft landing if it did keel over 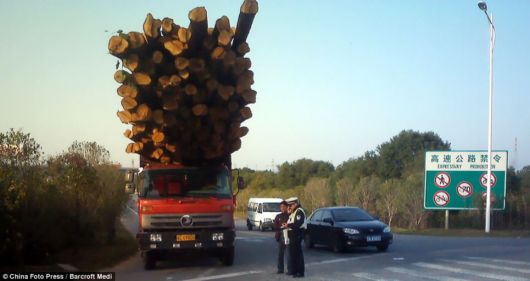 Steady as he goes: A truck driver keeps his precarious logs in place, but has to stop to explain to a traffic police officer in Nanchang, China 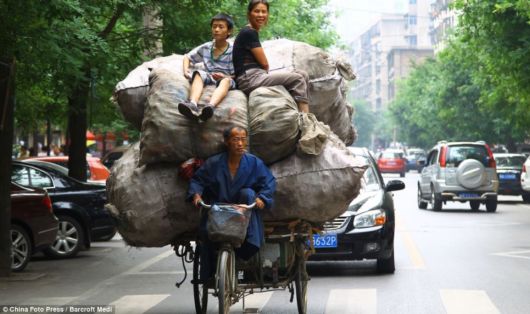 Precious cargo: A fearless bike rider has his goods and family piled above his head as he pedals hard down the street 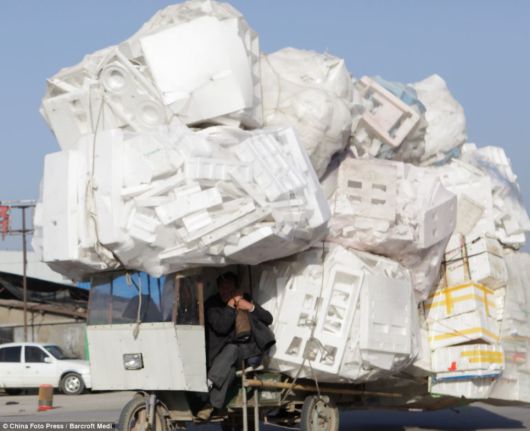 Spot the driver: A mound of polystyrene boxes on a street in Xi’an 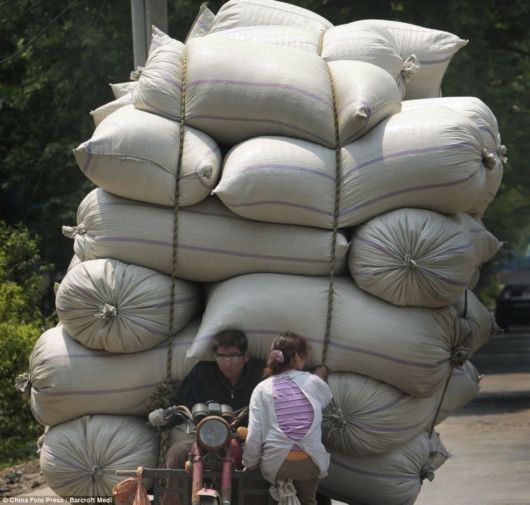 Hanging out: This pair look unperturbed by the bag towering above their motorcycle in Nanjing 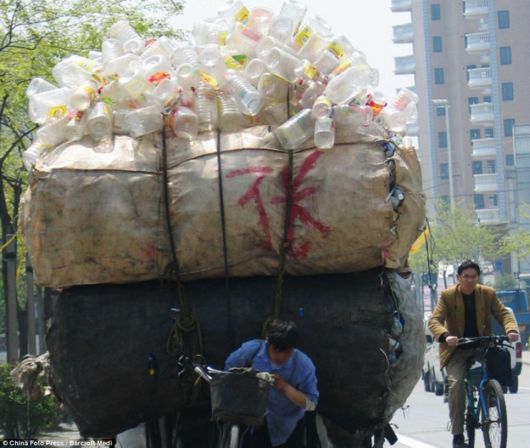 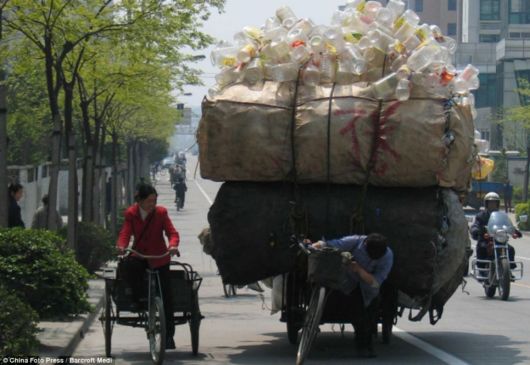 Amused: A fellow cyclist laughs at her the collector with his enormous baggage in Shanghai 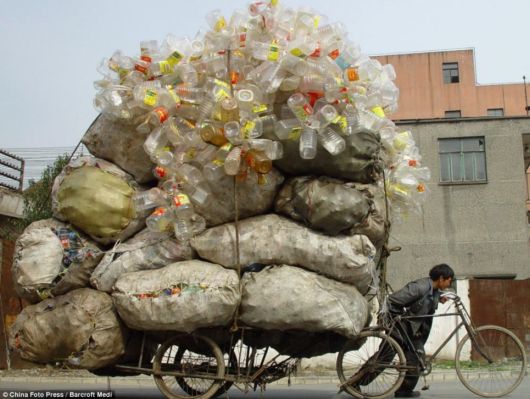 A load of rubbish: A collector of recyclable waste in pushes along his enormous plastic bottle collection in Shanghai 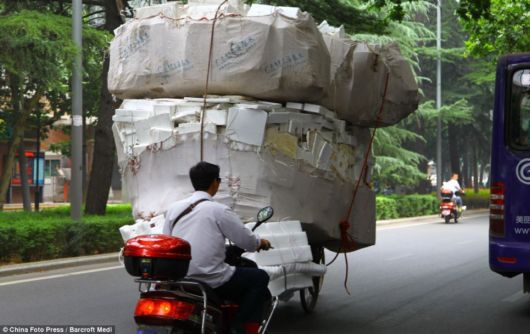 Tricky manoeuvre: Bundled up polystyrene boxes in Xi’an make it difficult for other motorists to get around without causing an accident 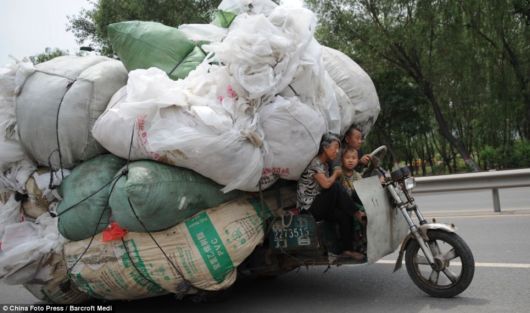 Squashed family outing: A family squeezes under mounds of plastic bags that are nearly scraping the ground in Taiyuan

The images that were taken from across China, including cities such as Shanghai, Shouguang as-well-as rural Huai-an, show that fellow road-users have to be very weary of these heavy loaders – there could be disastrous cases of lost-loads and accidents clogging up the roads. could strike in the form of a giant lost-load.

Chinese photographer An Fu, 44, explained what it was like to witness real-life bulk carriers at their most laden.

‘These carriers are dangerous,’ said An.

‘Sometimes they fall over into the road or the driver is stopped by the police because they’re overloaded.’

‘Drivers load their vehicles with so many goods because they need to carry as many goods as possible to save money and time.’

There have been several recent high profile accidents because of this overloading problem.

Last year, a Chinese driver whose truck was so heavy the bridge he drove on collapsed was sent the nearly £16m bill for the repair work. 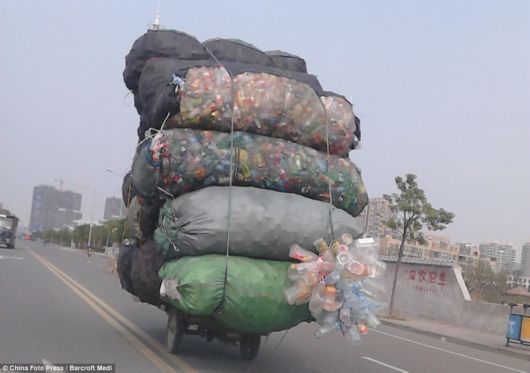 Uphill struggle: A rubbish collector battles along the road in Yuyao, China 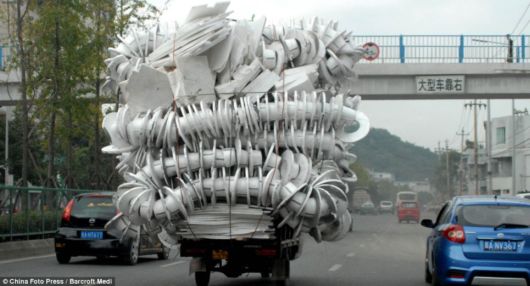 The long and winding cargo: An motor tricycle negotiates a main road in Guiyang with coils of wound-up household materials 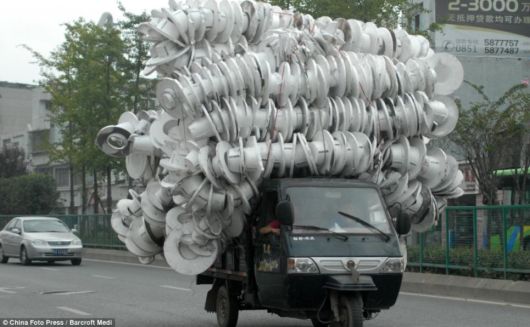 Careful taking corners: the motor tricycle in Guiyang has coils of plastic spilling out both right and left 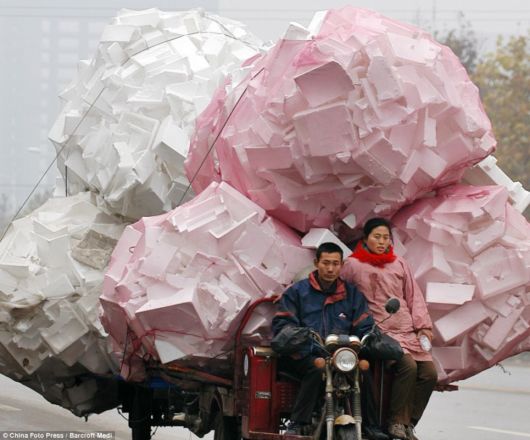 Uncomfortable ride: A man and his companion ride a tricycle engulfed by bags of plastic foam 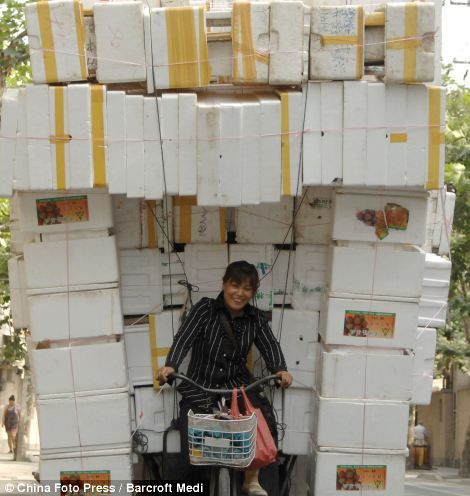 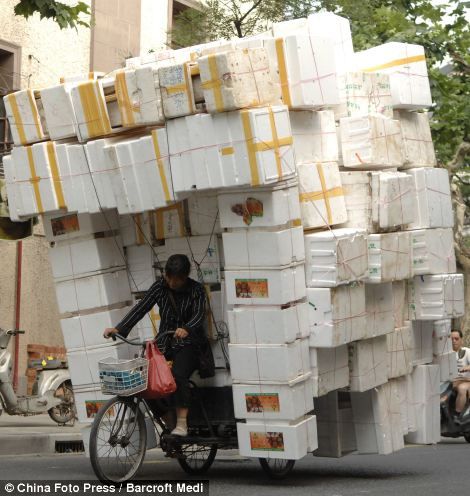 Soldiering on her with her heavy load: a woman moves innumerable plastic boxes through Shanghai on her tricycle 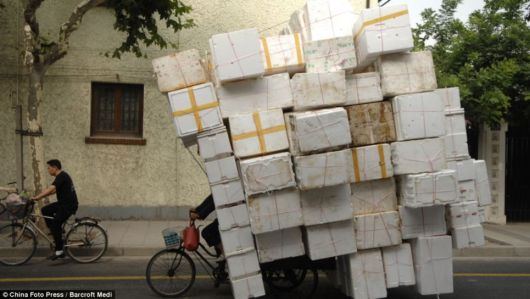 Look out behind you: The woman in Shanghai with all her boxes on her bike does not have a hope of seeing traffic coming behind her

The authorities are serious about clamping down on the tradition, however cost-effective it is.

‘They always need to cut the costs of fuel from multiple trips and like the rest of us time is money for these hard-workers,’ An said.

‘Many drivers don’t have the best vehicles to distribute recycling and other goods they need to transport.’

‘So they make the best of what they have.’ 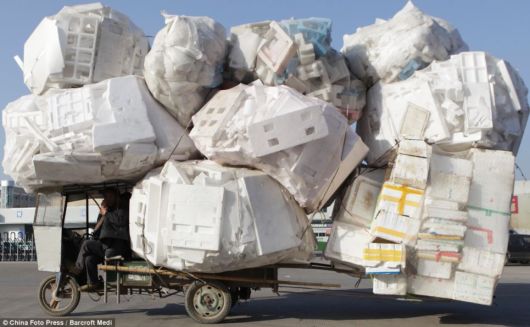 Not just piling it up, but piling it back: An electric tricycle moves slowly through Zhuji 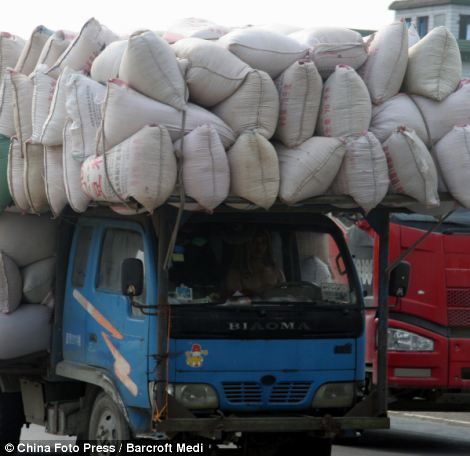 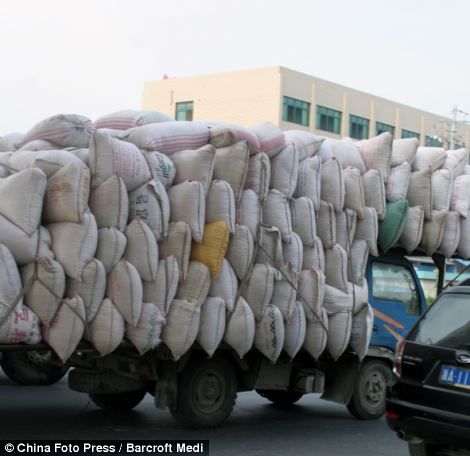 Overloaded from the front and side: This little lorry is lost underneath it cargo as it winds through the busy Chinese rush hour 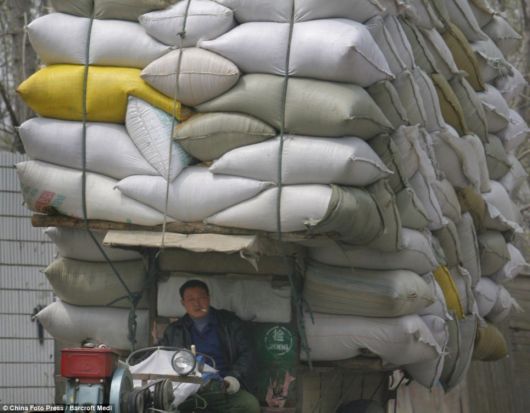 Relaxed despite the danger: A driver smokes a cigarette while his tractor lugs bags of paddy rice in Huai’an, China 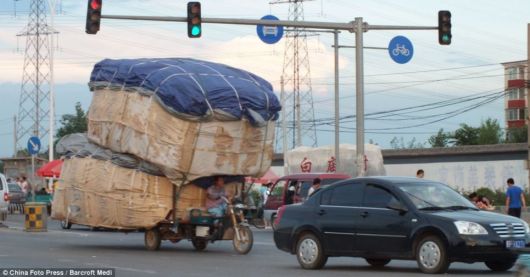 Mind the crossing: This man in Beijing looks worryingly close to be being squashed under the load above his head 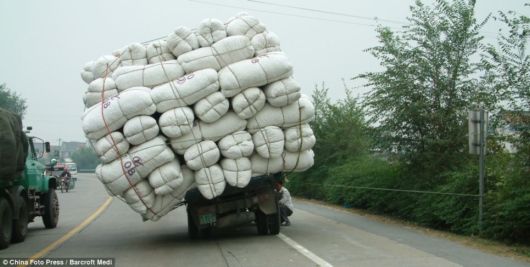 An accident waiting to happen: A truck comes to a standstill on a national highway in Hai’an 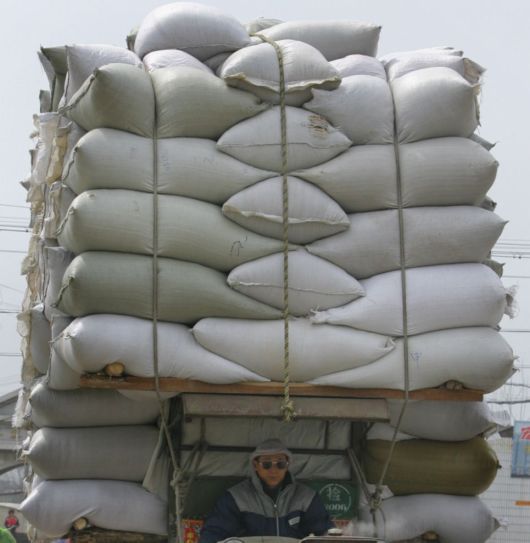 Neatly stacked: An orderly though huge stack of bags in Shouguang