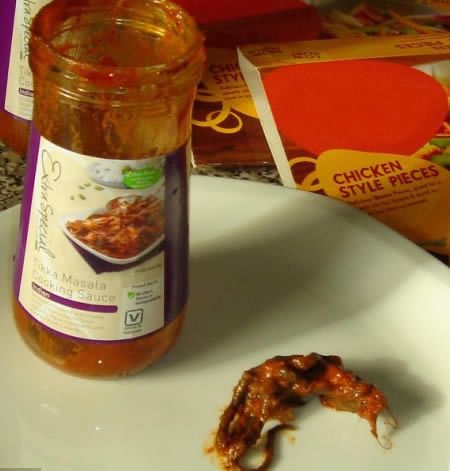 When Cate Barrett bought a jar of tikka masala sauce from her local Asda store, she was expecting it to contain a bit of a kick. But what she wasn’t expecting to find was the dead mouse which had somehow ended up in the jar – along with the rest of her favorite sauce. The nursery worker had begun making dinner for herself and her boyfriend, Nigel, when she poured the sauce into the pan, and noticed it was a little lumpy. As she began stirring the sauce through, she noticed what looked like whiskers and a tail – and immediately knew it was a dead rodent. The couple took the dead animal and the jar of Asda Extra Special sauce back to the shop where a manager apologized and said it would be sent for examination. 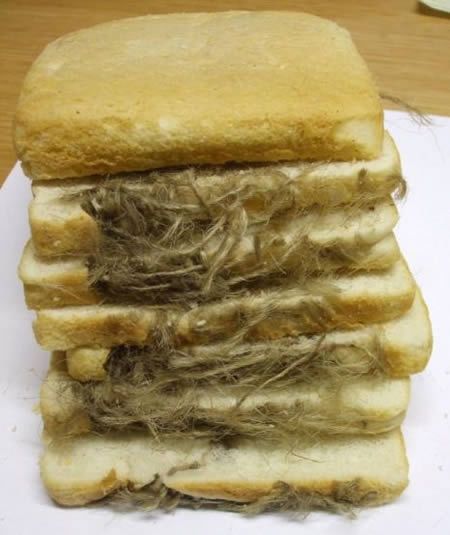 A woman in Northern Ireland discovered part of an oven glove baked into her slice of bread – and she didn’t even notice it until she began eating it. The loaf had been bought from a local shop just before Christmas. When the victim discovered the contamination, she reported the matter to the environmental health section of the council. The packet turned out to be full of shreds of the hessian-type cloth. Herefordshire-based Hovis makers Premier Foods were fined £750.

An American mother went to a McDonald’s with her two 6 and 8 -year old children.
She ordered two Happy Meals with chicken for the children and a hamburger with fries for herself. While they were eating, the 6-year old was more interested in the slide across the street than in the chicken nuggets which he didn’t even touch. So the mother decided she would eat them. Without actually watching what she was doing she was bringing a chicken biggest to her mouth, just when her 8-year old son yelled not to eat it. So she looked at the biggest to find that — despite the crust, it looked just like a chicken’s head.The manager offered them their meal for free and two more weeks of free meals. The mother pressed charges and demanded 100,000 dollars compensation. 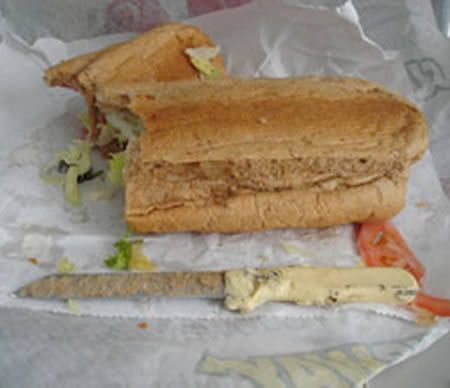 A Queens, N.Y. man sued his local Subway restaurant after he made a frightening discovery that gives new meaning to his former favorite, the Italian cold-cut trio: a knife baked right into the bun. John Agnesini, 27, was shocked to find the surprise ingredient, and a large one at that, in his sandwich. The design director of HX magazine was sitting at his computer doing work and not looking at what he was about to put into his mouth. Agnesini said he didn’t bite into the knife’s blade and wasn’t cut, but a few hours later, he said he felt sick to his stomach and went to his doctor.

5. Dead frog found in a Diet Pepsi can 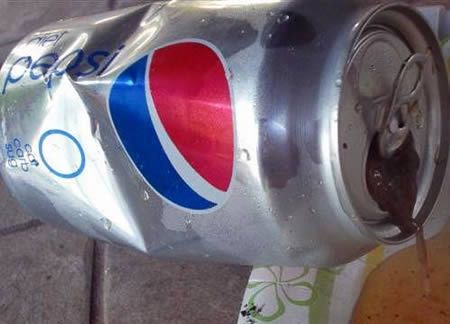 Fred DeNegri was grilling in his backyard when he cracked open a can of Diet Pepsi, took a thirsty gulp and immediately started gagging. The flavor of his Pepsi was rank and the texture was thick like slime. He immediately took it to a sink and shook out the contents until something resembling "pink linguini" slid out, followed by "dark stuff?. Despite persistent shaking, a heavy object remained inside the can. Completely disgusted, the DeNegris immediately called poison control and the FDA, and the can was taken in for lab testing to identify the source of the sludgy mess. The couple received a copy of the completed report from the Food and Drug Administration Office of Regulatory Affairs, which concluded the foreign matter appeared to be a frog or a toad.
6. Finger found in frozen custard

A man found part of a severed finger packed inside a pint of frozen custard he’d bought from a Kohl’s Frozen Custard shop, and officials said it belonged to a worker injured in a food-processing machine accident there. The customer, Clarence Stowers, said he put the finger in his mouth, thinking it was a piece of candy when he opened the pint at home. Stowers said he spat the object out, and "I said, ‘God, this ain’t no nut!’ So I came in here to the kitchen and rinsed it off with water and realized it was a human finger and I just started screaming."

The custard shop owner, Craig Thomas, said that the 23-year-old employee who lost the finger had dropped a bucket while working with a machine that dispenses the custard. He tried to catch the bucket when the accident occurred. Thomas said that as several employees tried to help the injured worker, a drive-thru window attendant apparently scooped the chocolate custard into a pint before being told what had happened. 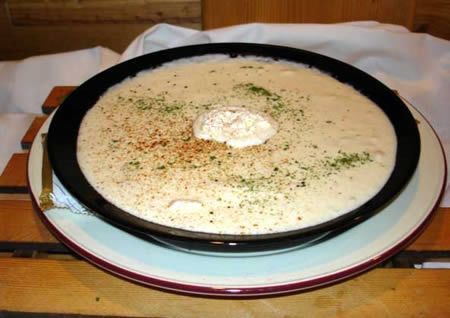 In Feb. 2002 a woman was eating a bowl of clam chowder at a McCormick and Schmick’s seafood restaurant in Irvine, CA, when she bit down on something rubbery. She thought it was a piece of calamari, but when she spit it out into her napkin she discovered that it was a condom. She immediately complained and the restaurant manager took the condom from her. The woman later sued and won an undisclosed settlement from the restaurant. The restaurant itself tried to sue the supplier of the clam chowder, but a judge ruled in favor of the supplier.

8. Cockroach found in packet of GoldenBoy 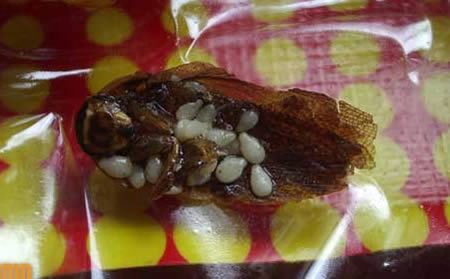 A man almost ate this cockroach, found inside a packet of GoldenBoy crispy anchovy snack. The cockroach was difficult to spot initially as it was coated with sesame seeds, making it blend together with the snack. He had bought a ‘GoldenBoy crispy anchovy snack’ and almost ate a small cockroach after eating about 1/3 of the snack. The cockroach even had sesame seeds on it, which means that it came along with the anchovies inside. 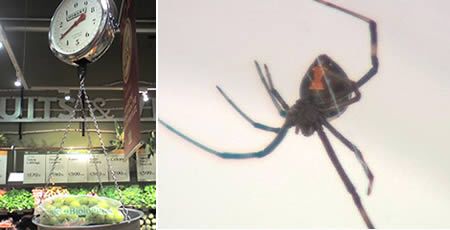 A man from Boston found a living black widow spider in a bag of grapes bought at the Whole Foods Market in Brighton. Jorge Fuertes reached into the bag, pulled out some grapes and saw something black fall out and run away. He thought it was an ant, so he looked in the bag and found a southern black widow spider. He spit out his mouthful of grapes and noticed the spider’s telltale red hourglass on its belly. He put it in a yogurt cup and went back to the store to let them know what had happened. A manager told Fuertes the entire shipment of Anthony’s brand organic red seedless grapes would be removed from the shelves. In a statement Whole Foods said spiders are part of the landscape at their California grower and "although we are very cautious when unpacking produce, sometimes insects are not detected." A black widow bite is rarely deadly, but its neurotoxic venom is painful. It can bring on muscle cramps, vomiting, and dizziness, especially in young children and the elderly.

A family accused chefs of serving poop in their ice cream after they complained about noise during a football match. A bitter row broke out between them and one of Sydney’s largest tourist pubs. State government food minister Ian Macdonald confirmed that frozen fecal matter had been found in a serving of chocolate gelato offered to placate pub patron Steve Whyte and his wife Jessica, who became "violently ill" after eating it. Staff at the Coogee Bay Hotel, located just a few minutes south of Bondi Beach, denied the charge. Both the chef and restaurant manager volunteered for DNA tests to prove their innocence. Both sides have accused the other of money seeking, with the Whyte’s claiming they were offered $5,000 (£1,500) in hush money by pub General Manager Tony Williams, while they in turn were accused of trying to negotiate up to $1 million in damages