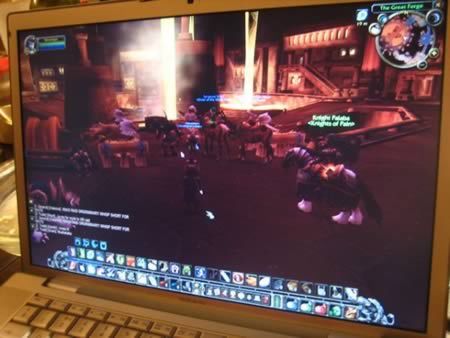 23-year old Xiao Feng doesn’t want to get a job. He’d rather spend his time playing video games. To discourage this activity, Feng’s father hired players to hunt down and slay his son’s characters.

Unhappy with his son not finding a job, Feng decided to hire players in his son’s favorite online games to hunt down Xiao Feng. It is unknown where or how Feng found the in-game assassins?every one of the players he hired were stronger and higher leveled than Xiao Feng. Feng’s idea was that his son would get bored with playing games if he was killed every time he logged on, and that he would start putting more effort into getting a job.

2. The Chinese millionaire who works as a street cleaner to set a good example for her kids 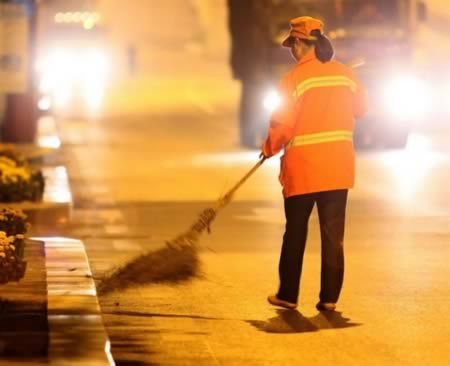 There probably aren’t many millionaires willingly volunteering to work in sanitation for about $228 a month. However, 53-year-old Chinese real estate mogul Yu Youzhen gladly wakes up at 3 a.m. six days a week to sweep almost two miles of roadway for one major reason: to set a good example for her children.
Yu, who amassed her fortune as the result of hard work and real-estate, has been cleaning streets since 1998. Although she owns 17 properties valued at roughly $1.5 million, Yu refuses to give up the contract job with the Wuchang District Chengguan Bureau Cleaning Team she acquired 15 years ago.

After witnessing what great fortune and a bad attitude can do to a person, Yo Youzheng became determined to keep her family on the right track. She’s already warned her son and daughter, ?If you don’t work, I’ll donate the apartments to the country.? It seems to have worked, since her son now works as a driver in the Donghu Scenic Area, making over 2,000 yuan a month, and her daughter is an office worker, with a 3,000 yuan salary.

3. The father who runs triathlons while carrying his daughter, who suffers from cerebral palsy 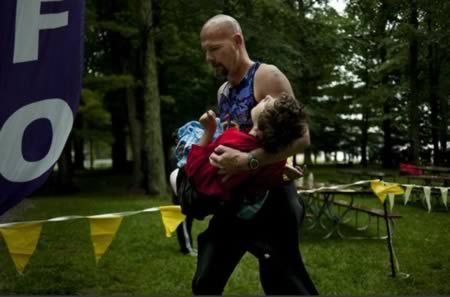 For the past four years, Rick van Beek has run his local triathlon with his daughter who has cerebral palsy. She can neither walk nor talk, and her dad says he isn’t even sure that she can see. However, he knows that she loves the outdoors, and he loves her, so he swims while pulling her in a kayak, bikes with her in a cart behind him, then finally runs while pushing her in a wheelchair so she can feel the breeze on her face. Is someone cutting onions in here?!
4. The father who wears a skirt in solidarity with his 5-year-old son 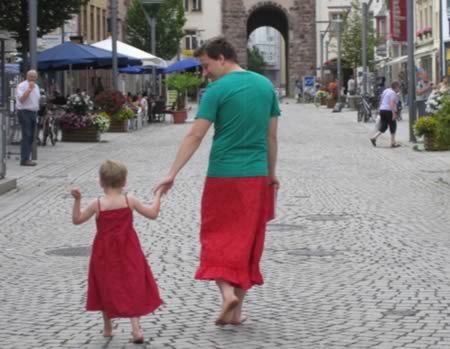 When it comes to supporting his son’s unconventional wardrobe, Nils Pickert talks the talk and walks the walk. The German dad explains that he wears women’s clothing (including nail polish) to help his 5-year-old son feel good about going out in dresses and skirts. A picture of Pickert and his little boy, sporting matching red clothes — dad in a long skirt, son in a spaghetti-strap dress — has been making the Internet rounds, inspiring enough positive feedback to cancel out a thousand sideways looks and gender marketing fails.

Pickert says that in the small town where he lives, his son’s dress choices are seen as everybody’s business — and when it comes to standing up for his son, he’s determined to show, not just tell.

5. The parents who got insulin pump tattoos to support their diabetic child 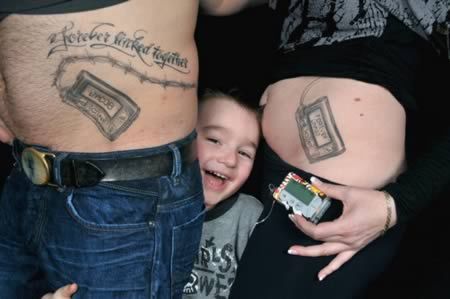 Some parents get tattoos of their child’s name, but Philippe Aumond and Camille Boivin went one better. In a show of solidarity, they each have an image of an insulin pump tattooed on their abdomens, declaring that they are ?forever linked? to their son Jacob.

A while back, Jacob, diagnosed with Type 1 diabetes at age 3 ½, was excited by the idea of getting an insulin pump that would replace four to five injections a day, and he figured it would be like having his own little robot working for him.

Jacob is now five and in kindergarten, and he wears it 24-7. ?He adapted pretty quickly, but one time he told me that he felt different and he was wondering if he was alone in the world, you know, wearing a pump,? Boivin said. So she and Aumond decided to get tattoos of the pump, ?because no parents want to have their child feel left out or alone.?

6. The parents who invented the ?get along’ t-shirt 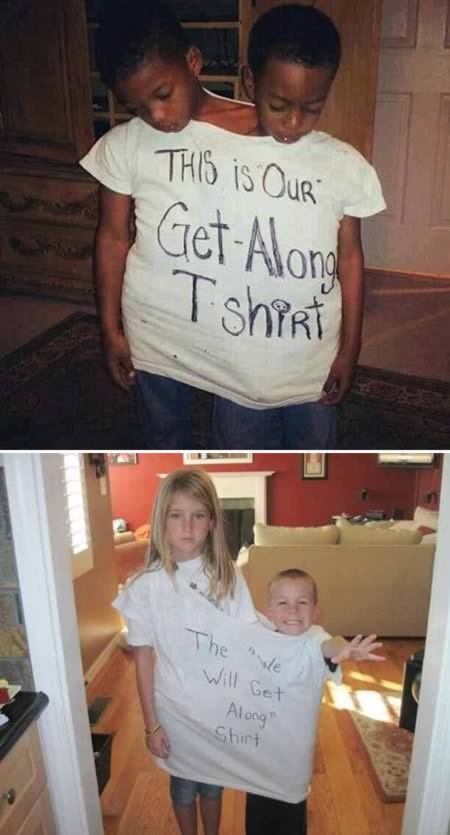 7. The mother who tries her best for her kids to be clean and organized 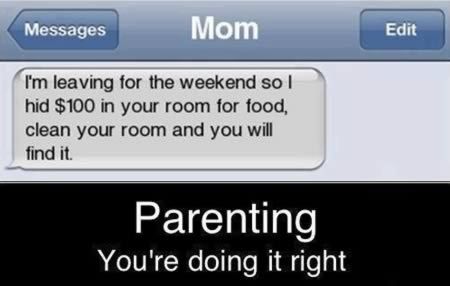 8. The parents of this twin set who are really sensitive to others 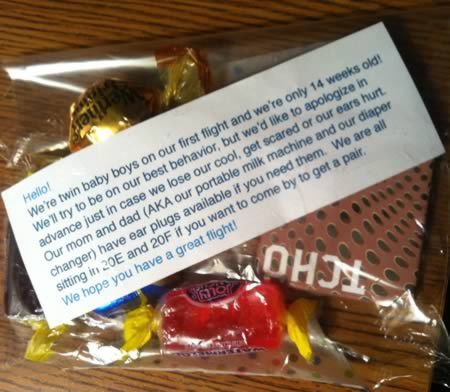 Redditor gigantomachy uploaded the following photo and captioned it, ?Brilliant and thoughtful parents handed these out to everyone on my flight.?

9. The mother who gave her son an iPhone with an 18-rule contract 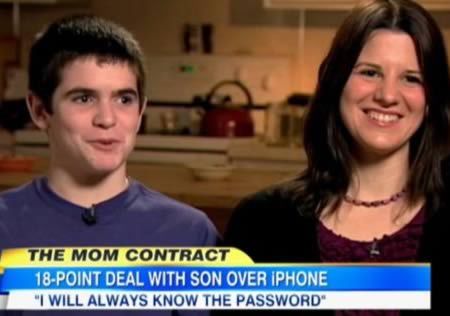 If you’re a mom or dad who gave an iPhone to your kid, you should make your kid follow the rules of Janell Hofmann. Hofmann bought an iPhone for her 13-year-old son Greg and gave him 18 rules to follow. If you think Hofmann was being an overbearing mom, think again. There’s good advice in her 18 rules!

Sure, she requires the password of the iPhone and demands to receive the phone at night, but she also encourages her kid not to get so caught up with her iPhone and to just live life. Rule #5 wants Greg to, "have a conversation with the people you text in person," because it’s a life skill. Rule #13 says not to take a "zillion pictures and videos" because you should live your experiences instead of being so focused on documenting everything.

However, the two best rules are probably the last two. Rule #17: Keep your eyes up. See the world happening around you. Stare out a window. Listen to the birds. Take a walk. Talk to a stranger. Wonder without googling. Also, rule number 18 admits that Greg is probably going to screw up eventually, but they’ll figure it out together because they’re a team. Yeah, you can say aww.

10. The parent who uses revenge in the sweetest way 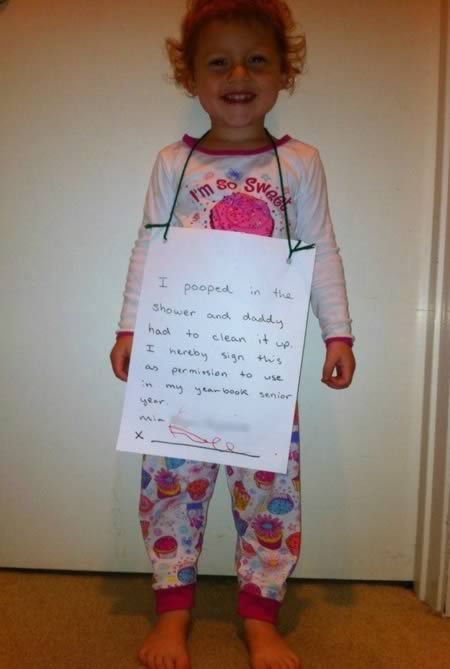 11. The celebrity father who uses comedy to educate 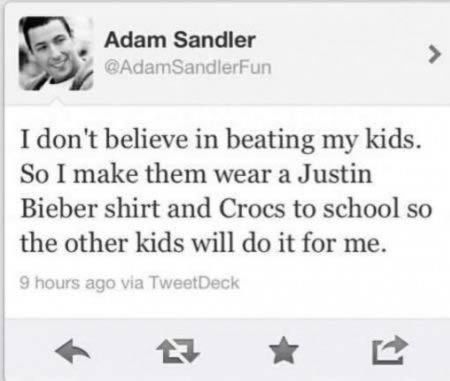 Adam Sandler for the win.

12. The parents who teach their kids to be grateful even in the harshest ways 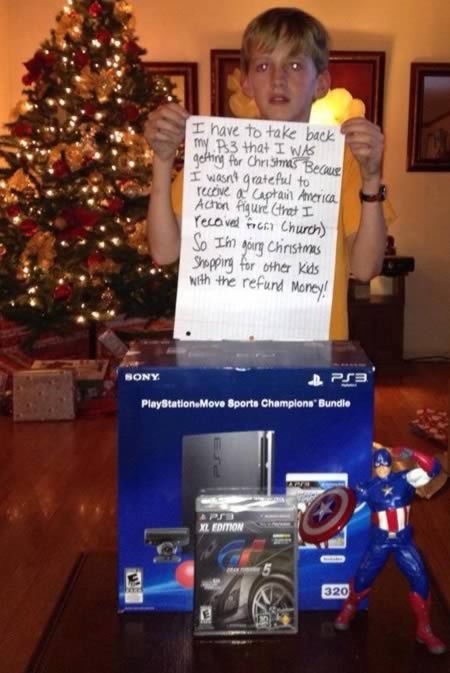