Goose pulling is an old sport originally played in parts of the Netherlands, Belgium, England and North America from the 17th to the 19th centuries. The sport involves a goose that is hung by its legs from a pole or rope that is stretched across a road. A man riding on horseback at a full gallop would attempt to grab the bird by the neck in order to pull the head off. Whoever makes off with the head is declared winner and becomes the noble hero of the day. Goose pulling is still practiced today, in parts of Belgium and in Grevenbicht in the Netherlands as part of Shrove Tuesday and in some towns in Germany as part of the Shrove Monday celebrations.

During the old days a live goose was used. To make the sport challenging, the goose’s neck was generously oiled to make it difficult to retain a grip on it, and the bird’s constant fluttering and flailing made it difficult to target it in the first place. Sometimes "a person? with a long whip in hand was stationed near the target who would harass the horse as he passed by. 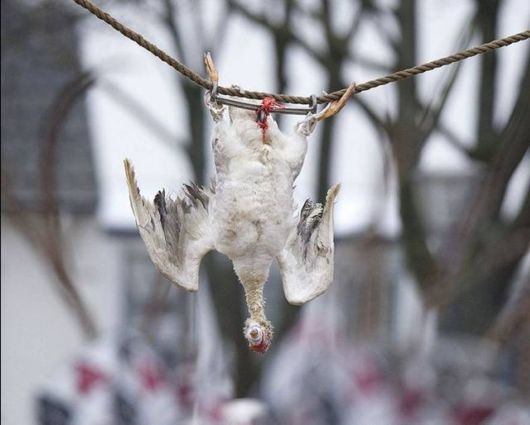 The prizes of a goose-pulling contest were trivial ? often the dead bird itself, other times contributions from the audience or rounds of drinks. The main draw of such contests for the spectators was the betting on the competitors, sometimes for money or more often for alcoholic drinks.

Today, instead of live geese, dead ones are used, but that doesn?t make the sport any less brutal. Even during the old days when animal brutality were common, goose pulling was often frowned upon and sometimes compared to the barbarous practice of bull-fighting. Goose pulling largely died out in the United States after the Civil War, though it was still occasionally practiced in parts of the South as late as the 1870s. However, in Grevenbicht in the Netherlands and in parts of Belgium and Germany, goose pulling ? using a dead goose that has been humanely killed by a veterinarian ? continues to this day as part of traditional Shrove Tuesday celebrations. It is referred to as Ganstrekken in the Netherlands, Gansrijden in Belgium and Gänsereiten in Germany. Although the use of live geese was banned in the 1920s, the practice still arouses some controversy. In 2008 the Dutch Party for Animals (PvdD) proposed that it should be banned. The organizers rejected the proposal, pointing out that there was no question of cruelty to animals because the geese were already dead.

Belgian goose pulling is accompanied by an elaborate set of customs. The rider who succeeds in pulling off the goose’s head is "crowned" as the "king" for one year and given a crown and mantle. At the end of his "king year" the ruling king has to treat his "subjects" to a feast of beer, drinks, cigars and bread pudding or sausages held either at his home or at a local pub. The kings compete with each other to become the "emperor". 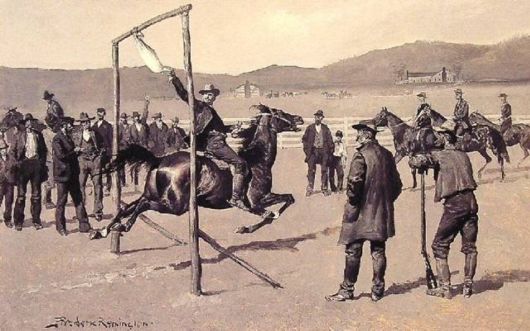 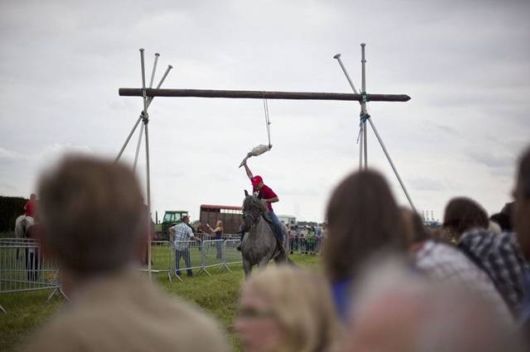 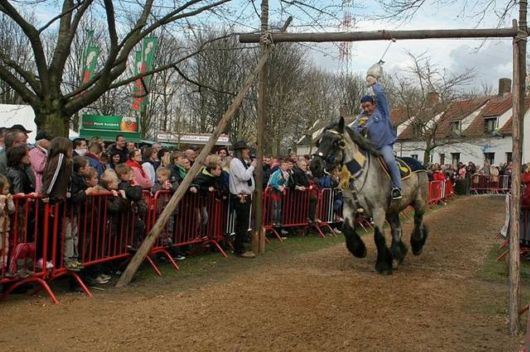 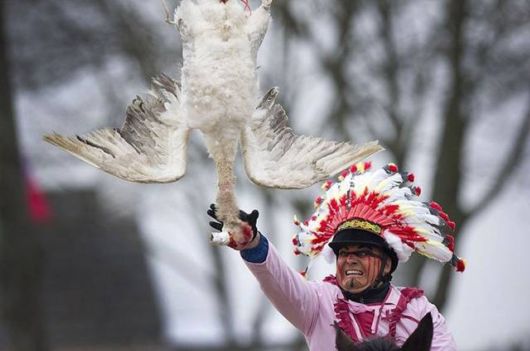 Goose pulling in Grevenbicht, the Netherland. 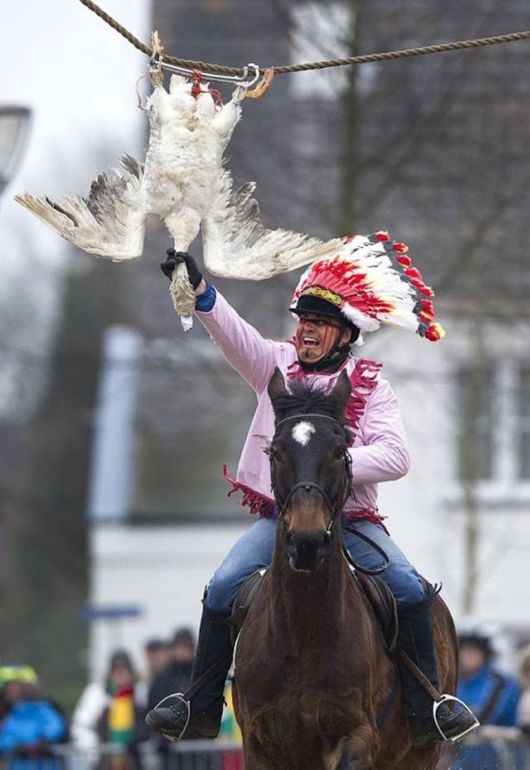 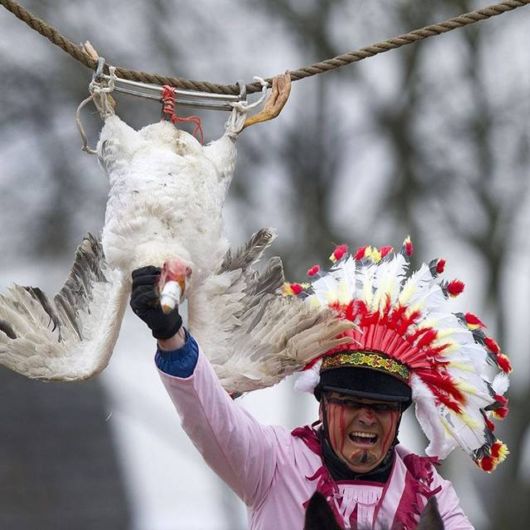 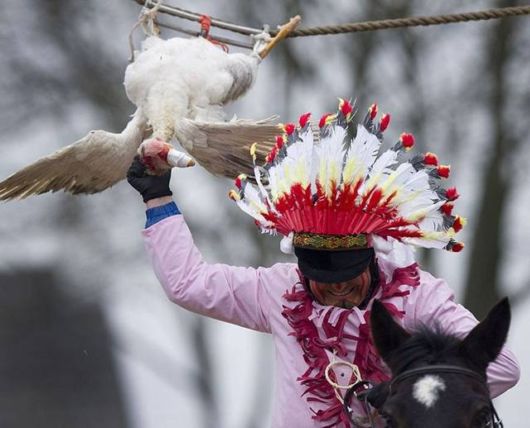 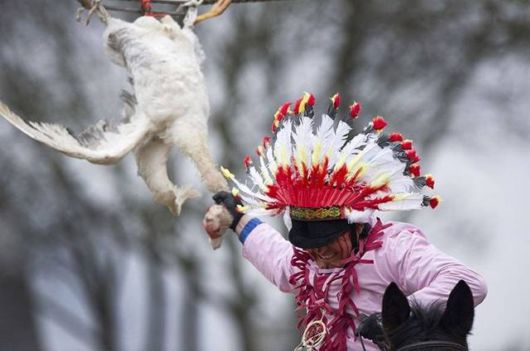 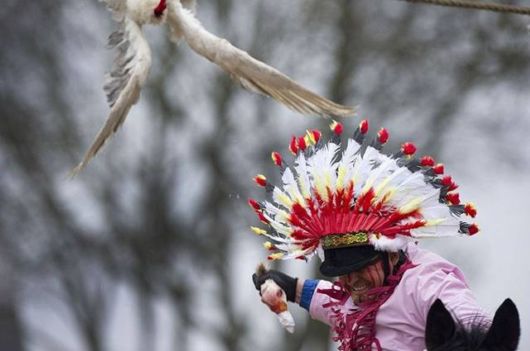 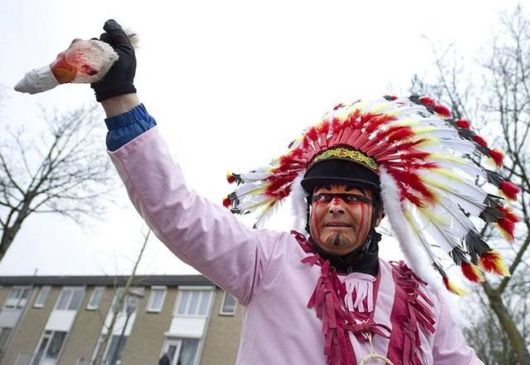