1. Strippers World a shop dedicated to the stripping business 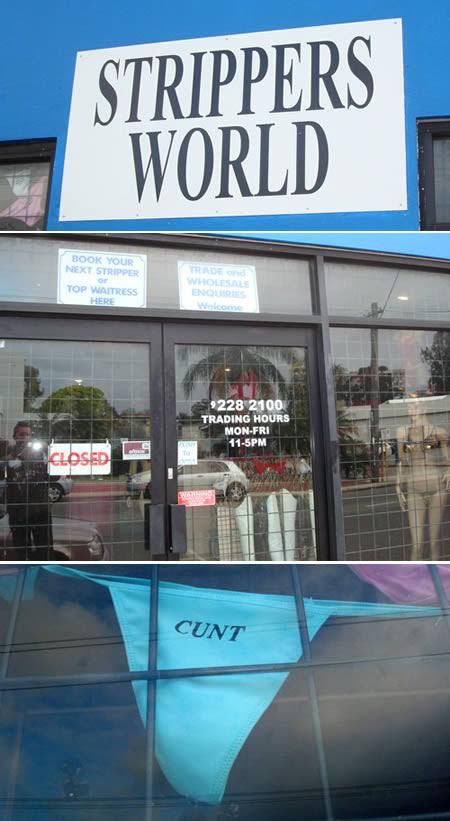 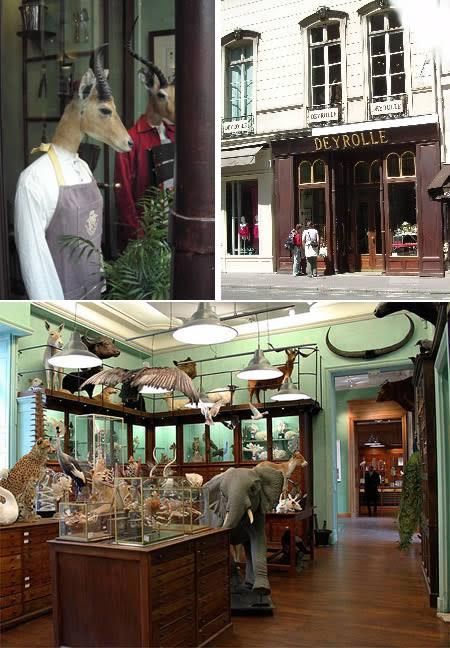 If you want to buy a stuffed elk, a frog’s skeleton, a Goliath beetle as big as a fist, or a Stone Age axe head, where would you go? For people living in Paris that would never be a question, for they have Deyrolle: Unofficially the world’s creepiest, yet strangely enchanting Taxidermy Shop, on their doorstep. The shop was opened in 1831 by entomologist Emile Deyrolle, and since then an enormous variety of animals have been lugged through the front door by customers ranging from budding young scientists through to overly-wenkghy collectors. On entering the entomology room of the shop, the public come face to face with creatures of all sizes: butterflies, rabbits, foxes, geese, elks? but to turn the creepiness up a notch a number of the larger animals have been dressed in human clothing.

3. Muara Kuin Floating Market a market where you shop by boat 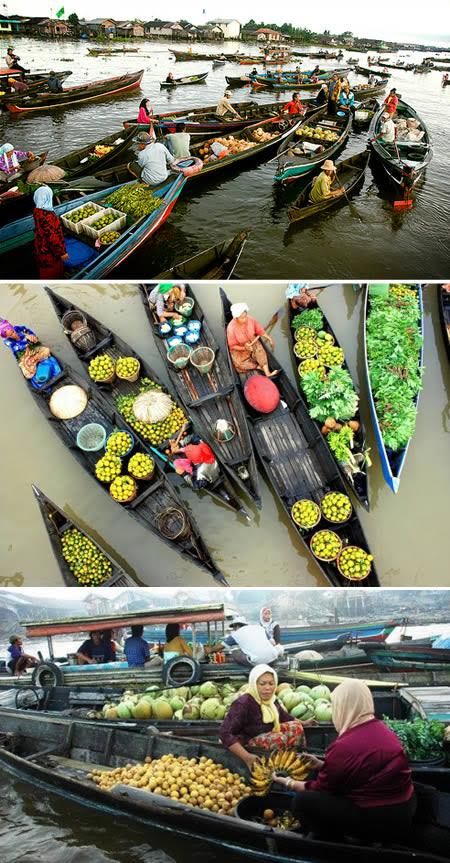 Banjarmasin, South Kalimantan, (Indonesia) is the city known as the city of a thousand rivers. This city has a uniqueness that is very interesting. Here, there is a traditional market that is better known as Muara Kuin Floating Market, located in the Barito river waters at the mouth of the river Muara Kuin. The traders bring a variety of materials by using jukung (small boats used by the public). With a view to see, tourists enjoy the sightseeing. A small boat which is usually called jukung brings merchandise with vegetables, fruits, all kinds of fish and other household goods available at the floating market. As the sun begins to emerge, the market gradually begins to retreat, the merchants leave the floating market to bring the results with satisfaction.

4. Witch’s Market where you can buy the weirdest kinds of amulets

This got to be one of the most bizarre street markets in South America. Located in the world’s highest capital at 11,200 feet (3,400 meters), La Paz, the market over Calle Linares hosts a crowded line of unusual stores where witches, medicine women, folk doctors, astrologers, fortune tellers, and sorcerers live and work. From Llama fetuses for prosperity, to toad talismans, owl feathers and stone amulets; meet Bolivia’s Witches’ Market. Through prayer and a burnt offering of Llama Fetuses, witches ask the "Pachamama" –a god that many Bolivians call "Mother Earth"– to bring henkgh, happiness, and especially prosperity. Most Bolivian families have a dried llama fetus thrown under the foundations of their house for luck. The naked ceramic couples are to improve the sex life, rectify impotency, and increase fertility. 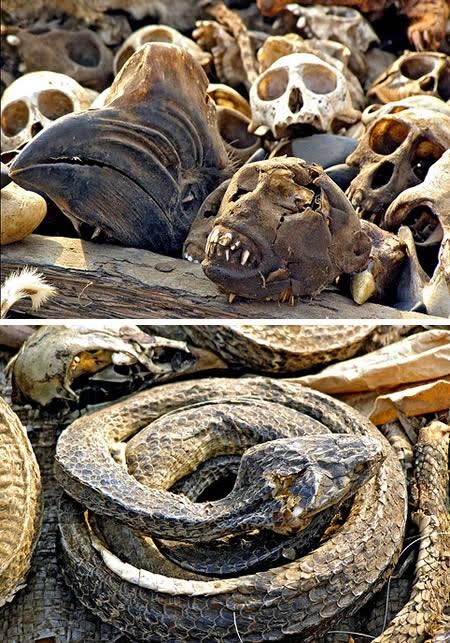 In Lomé, Togo (West Africa) there is a market that is not your usually fruits and vegetable stalls. They sell elephants’ feet, the heads of leopards, hands of chimpanzees, hearts of horses, and any other animal part you may or may not imagine. These items are not bound for the cooking pot; these are objects for traditional medicine. Ground up and drunk, swallowed or rubbed on the skin, they are said to cure a multitude of illnesses. Traditional voodoo priests and medicine men will administer the potions. The animal parts come from all over West Africa, and so do the customers.

6. Freitag’s Container Shop a shop made out of recycled containers

Swiss company Freitag is responsible for making some of the most fashionable bags on the market, and not just because they look good – these bags are made from recycled materials, with an average Freitag bag consisting of a truck-tarp body and seatbelt strap. In 2006, for their flagship free way shop in Zurich, the Freitag brothers decided to stick with this environmentally friendly stance and built a store from 17 rusty shipping containers, and it looks surprisingly inviting. At 26 metres in height the store offers quite a view from the top, one of the reasons why the brothers also decided to install a telescope at the summit in order for customers to take in the scenery, mostly consisting of a constant stream of trucks passing by.

7. The Old Umbrella Shop the cutest place to buy an umbrella 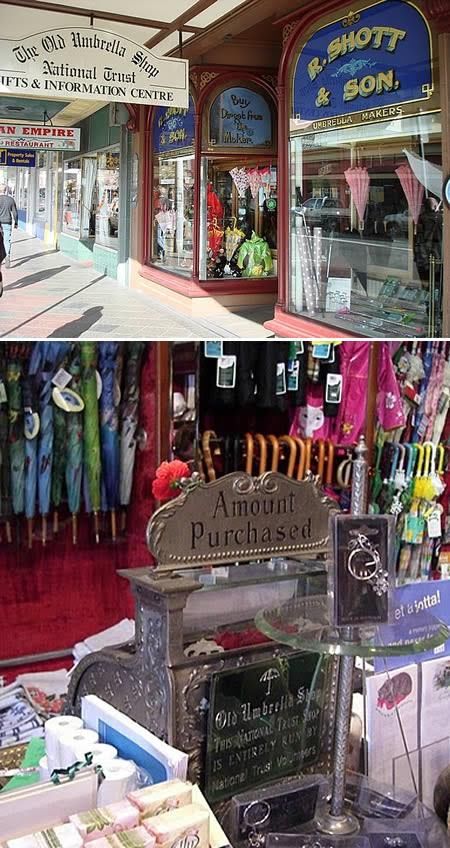 The Old Umbrella Shop is a heritage-listed store in central Launceston, northern Tasmania. Launceston is the third oldest city in Australia. This shop takes cutesy almost to the point of unbearable. There are lots of old-style toys, tea towels that middle-aged women will find strangely endearing and more kitsch books about birds and cats than you could ever wish for. However, the name of the shop isn’t some clever Alanis Morrisette-style attempt at irony. What it really specializes in is umbrellas. They come in all shapes, sizes and colours, with each one somehow managing to be more garish and brighter than the next. No more do the good people of Launceston have to settle for the bog-standard black umbrella they can pick one to match whatever they’re wearing. Rihanna, no doubt, would love it.
8. Rope a Japanese schoolgirl-fetish shop

Shibuya, in Tokyo, Japan, has many interesting shops, stores, services and restaurants. But one shop that is talked about by many westerners when describing strange Japanese under culture is called ROPE. ROPE is a specinkgy store that sells things that are a bit different to your run of the mill average adult shop. At ROPE you can find school girls uniforms, school girls socks and shirts and other things that used to belong to school girls. But, the most popular items sold are used senior school girls panties. These are wrapped in plastic with a colourful photo of the girl they belonged to attached to the front. Yours for only 4000 yen (about $US40). You can even buy them in bulk! Packs of 10 available for a discounted price! Having seen the other items available, like collections of photos of girlfriends for sale for 1000 yen, and that all the photographs available are perfect and seem to have been taken with the same camera, I’m convinced that the underwear probably didn’t belong to the person in the picture. Especially as the gentleman behind the counter was preparing many more of these used panties to go on the shelf. So, who likes all this stuff? Well, the Japanese fetish for all things school girl is called burusera.

9. Gypsy Brides Market a market where you can get yourself a wife

Dressed in their finest clothes and gold jewellery, thousands of teenage Roma girls parade around by their parents at an open-air brides market. Wearing lots of make-up, the teenagers come to the traditional annual market in Bulgaria, hoping to find a husband and preferably one willing to pay a large amount of money for his future spouse. At the market in the village of Mogila near Stara Zagora, the price of a beautiful young woman is said to be several thousand levs/euros. Younger siblings come along too to play and eat sweets while one newly-wed couple belly-danced on top of an old car to show their happiness at finding a match. Several wannabe-brides joined in, showing their eagerness to be married. The event takes place on the first Saturday after the start of the orthodox Easter fast – the Day of Saint Todor, or Horse Easter. In 2009 the gathering attracted some 2,000 people who came from all over southern Bulgaria including Plovdiv, Pasardzhik, Sliven and Jambol.
10. Ka Firushi Bird market Kabul’s bird bazaar 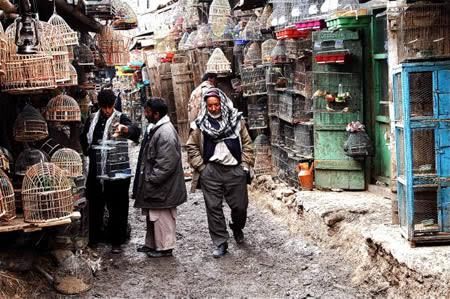 In Afghanistan, the keeping of birds as pets has long been a popular pastime. In one of the oldest quarters of the Afghan capital, Kabul, there is a bazaar that caters especially to bird-keepers. The bazaar is known as Ka Farushi – the "Hay Market". Ka Farushi is a narrow lane, lined with ramshackle mud brick buildings. It is located in a dusty quarter next to the Old City’s Blue Mosque, near the main bridge across the Kabul River. This part of the city is a warren of tiny lanes where no cars can penetrate, so the air is filled only with the melodious sound of birdsong. In tiny open-fronted shops, shopkeepers sell canaries, bulbuls (nightingales), budgerigars and other songbirds. While some shopkeepers here depend on their earnings to make a living, others – particularly the younger men and boys – often see it as a hobby.