Fashion has many fads and crazy logic, what rules the world of fashion is yet to be revealed. Fashion facts like a dark lip shade makes you look older where as a nude one takes age away from your face, are some of the fads that have no particular logic. Some fads like, the age olds debate over the which of the two strips horizontal or vertical made you look slimmer has finally found its conclusion recently. 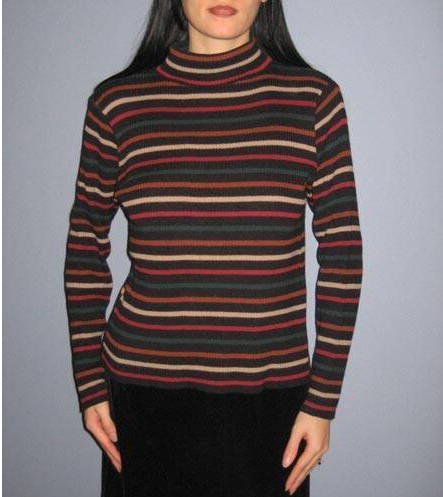 The most popular fashion advice that vertical stripes flatter the figure ? is a myth, according to a leading perception expert who says that wearing horizontal lines can actually make a person look thinner. Contrary to popular belief, stripes that run across the body are more slimming than supposedly flattering vertical stripes, according to the research by Peter Thompson of the University of York.

The study was based on the Helmholtz square illusion, created by 19th century scientist Hermann von Helmholtz who drew two identically sized squares and put vertical stripes on one and horizontal stripes on the other. That experiment showed the square with the horizontal stripes appeared taller and thinner than the other square, prompting Helmholtz to recommend ladies wore horizontal stripes to make them look taller. To reach his conclusion, the expert asked people to compare more than 200 pairs of pictures of women wearing horizontally and vertically striped dresses. He then asked them to say, in each case, which of the two they thought was fatter.

Contrary to popular belief, stripes that run across the body are more slimming than supposedly flattering vertical stripes.

Dr Thompson said it was not clear why the visual illusion existed, although it could be that the horizontal stripes made an image more 3D and introducing depth could reduce width. Well, now all you over weight people have to throw your ‘verticals’ away and start hunting for the ‘horizontals’, any thing at all to help you loose some weight.