This 15-Year Old Genius Boy?s Inventions Are So Good You?ll Be Amazed At How He Thinks!

While most kids his age are hankering after that one extra hour of play, he?s up all night in his lab experimenting and innovating! His hard work and passion have helped him win over 15 awards for various inventions! Let?s meet the young genius and find out what makes him tick.

?I do not want to live with problems, I want to solve them,? says M.Tenith Adithyaa, a 15 year-old student who already has 17 inventions under his name that have bagged him many awards and two Guinness World Record attempts.

An innovator, a professional coin collector, a software developer, a teacher, a bird tamer and a gamer, Adithyaa has a lot of achievements in his kitty and he makes sure he learns something new every day.

An eleventh grader, Adithyaa spends most of his time in his lab to come up with various solutions and innovations that could help society at large. Unlike a regular kid of his age group, who would be busy finishing up his homework on time so he could get one extra hour of play time, Adithyaa is up till 3 am experimenting in his lab.

?I am an outstanding student of the class as I am always standing out.

I have to stand outside!? he laughs.

This has become a regular story of his life and small setbacks don?t affect his desire to achieve bigger success. Once, while experimenting in his lab, during a chemical experiment, he had inhaled dangerous fumes, after which he had to be hospitalized.

While lying on the hospital bed, he told his parents, ?Science needs sacrifice?, which frightened his parents so much that they never allowed him to work with chemicals thereafter. But, truly dedicated to his passion for inventions, he continued his research for other ideas and came up with some very interesting inventions.

?When I work on various experiments I need a lot of plug points to power my devices,

which would mean a lot of wires and a big mess. I used to get very irritated with this so

I thought to solve the issue,? he says.

Adithyaa needed many electricity plug points to run various devices at the same time while experimenting. Using many extension cords/power strips was cumbersome, hence he developed an adjustable electricity extension board, in which one can put any type of electric plugs wherever space is available. The device is effective up to a distance of 3 meters, and the model is ready for commercialization.

?We use many plastic plates and create a lot of waste, so I came up with an idea to make cups and plates with banana leaves,? Adithyaa says.

The technology preserves banana leaves for a year without use of any chemicals. It also increases their durability. Preserved leaves can resist extreme temperatures and hold more weight than the original ones.

?Normally banana leaves dry up in three days because the cell wall is soft.

The process that I use hardens the cell walls, preventing the leaves from drying

for about a year,? he says.

The manufacturing cost of these plates and cups is very low and they can also be used as manure if disposed in the right way. The Ministry of Environment and Forests, GOI has approved this project and Adithyaa has received various awards for the same.

Basking in the glory

For his contributions at such a young age, Adithyaa has received global recognition including 2 world record attempts, 2 National Awards, 7 Titled Awards, 5 State Awards and many District Awards. He is also a winner of the IGNITE Awards conducted by National Innovation Foundation-India.

In addition to this, Adithyaa has been selected for the inaugural ?Innovator in Residence? program of the President office launched by the Honorable President of India, Shri Pranab Mukherjee on his birthday on December 11, 2013. He is currently staying at Rashtrapati Bhavan from July 1 to July 20, 2014 and is being mentored by the office of the President House! 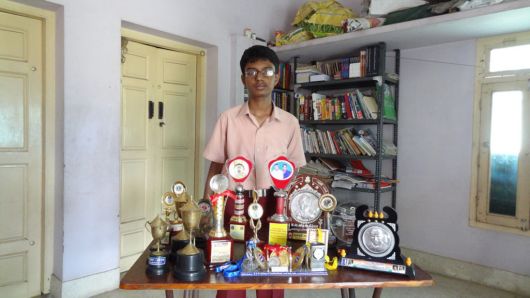 The young achiever wants to become an aerospace engineer and join ISRO.

?I am inspired by Leonardo Da Vinci?s life.

who makes people?s lives better. I want to become an aeronautical engineer and

Well, we hope he achieves all his dreams ? looks like they will be good for India too!