Christmas celebrations have kicked off around the world today as revellers across different timezones toasted the clock striking midnight. At the Vatican Pope Benedict XVI held his annual Christmas night holy mass at St Peter’s Basilica to mark the nativity of Jesus Christ. In Florida, around 150 surfing Santas, elves, snowmen and other Christmas characters took to the water in Cocoa Beach. The George Trosset’s Surfing Santa event Christmas in the Sand event raised money for Grind for Life, which helps people with cancer. 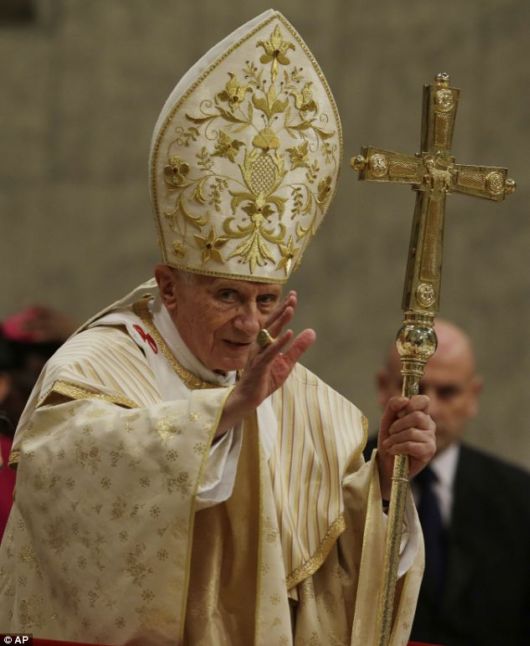 Heralded by the blare of trumpets reflecting Christmas joy, Pope Benedict XVI is presides over Christmas Eve Mass in St Peter’s Basilica, packed with tourists, Romans and other faithful 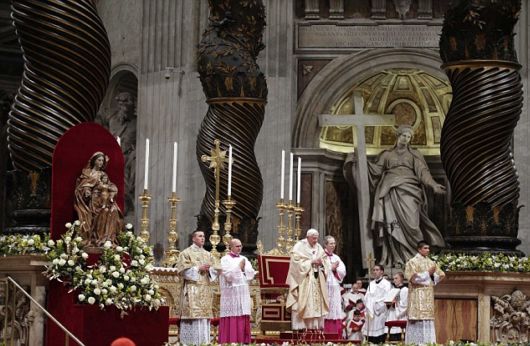 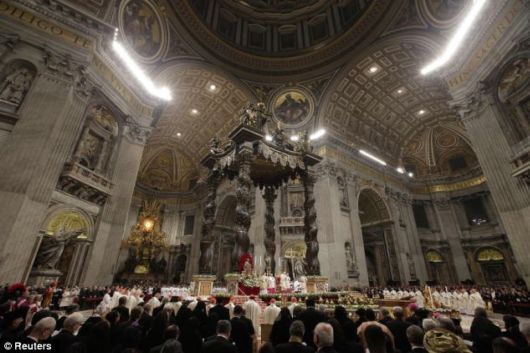 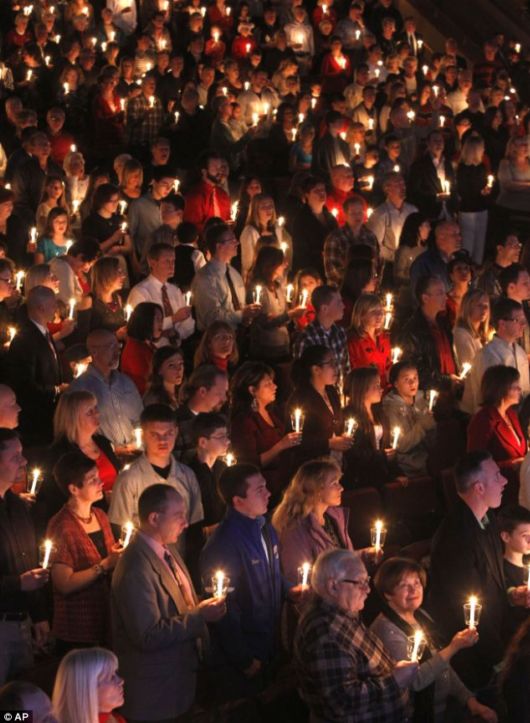 Christians hold candles at a Christmas Eve service at the Chapel at Crosspoint in Getzville, New York 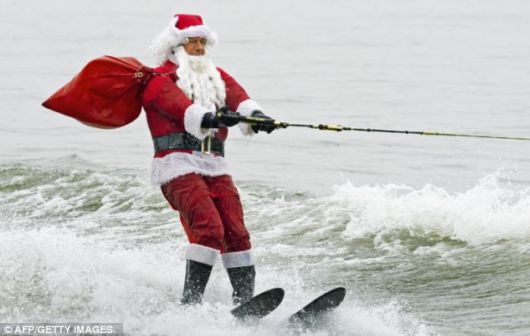 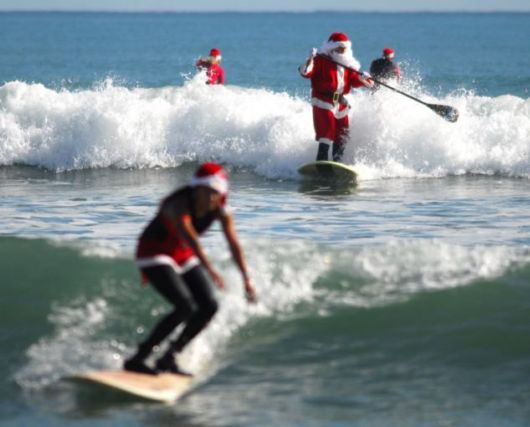 Around 150 surfing Santas, elves, snowmen and other Christmas characters showed up at George Trosset’s Surfing Santa event Christmas in the Sand in Cocoa Beach, Florida 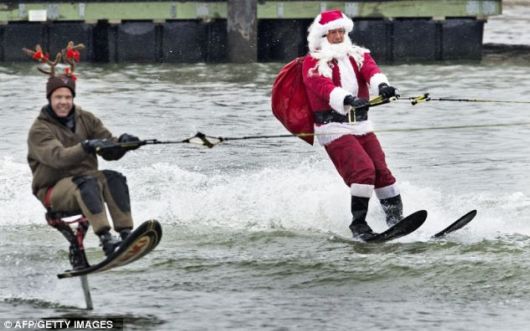 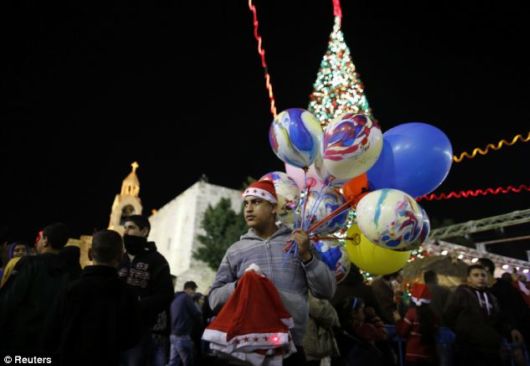 A Palestinian vendor sells balloons and Christmas hats at Manger Square, outside the Church of the Nativity, the site revered as the birthplace of Jesus, on Christmas eve in the West Bank town of Bethlehem

In the West Bank town of Bethlehem celebrations were held at Manger Square, outside the Church of the Nativity, the site revered as the birthplace of Jesus.

Thousands of tourists and Christian Arabs took to the streets, along with the annual Scouts parade and a protest by workers against mass layoffs.

Along the coast of Valparaiso city, about 75 miles northwest of Santiago, in Chile, fishermen organised a Santa Claus boat trip as people waited on the shore to receive their Christmas presents and well-wishes.

In Baghdad, Iraq, behind blast walls and with police nearby, 200 worshipers attended Christmas mass at the city’s Our Lady of Salvation Church, which officially reopened this month after a massacre in 2010. 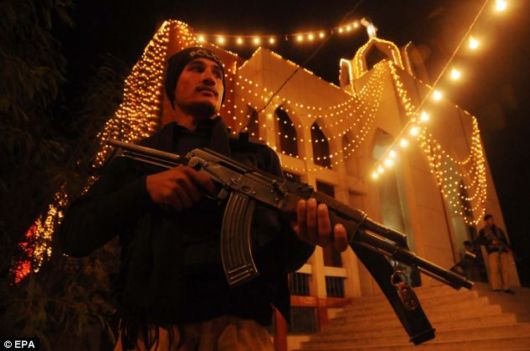 Police stand guard outside a Church as Christians celebrate Christmas, in Peshawar, Pakistan 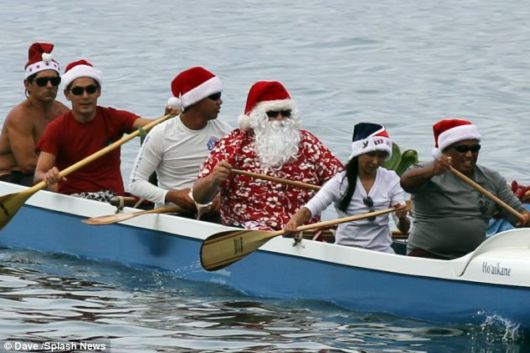 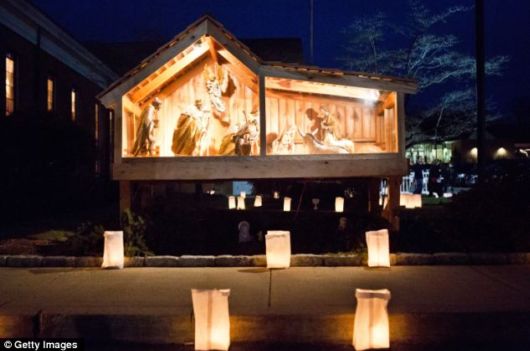 A nativity set is surrounded by lumineers, placed as a memorial for those killed in the school shooting at Sandy Hook Elementary School in Newtown, Connecticut 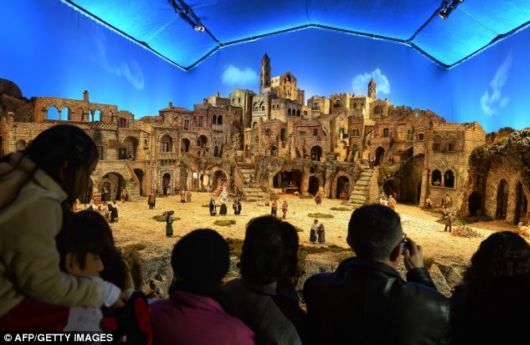 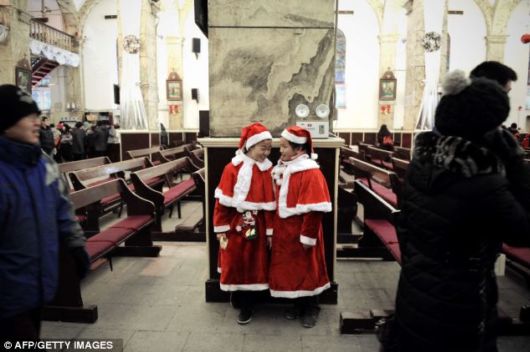 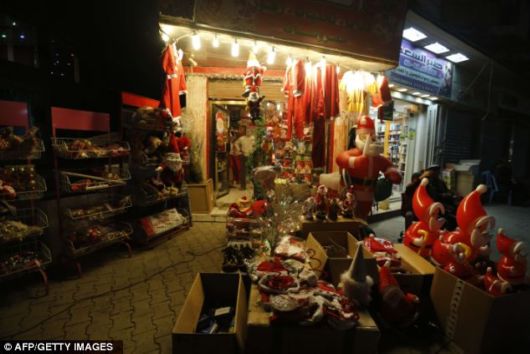 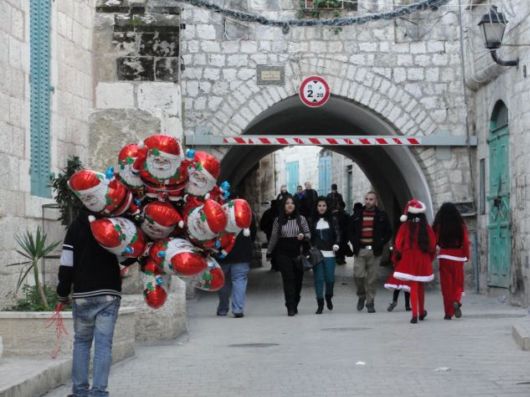 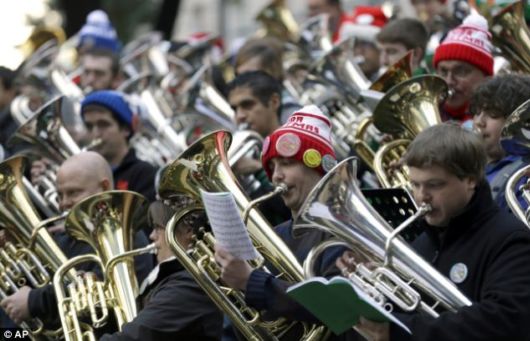 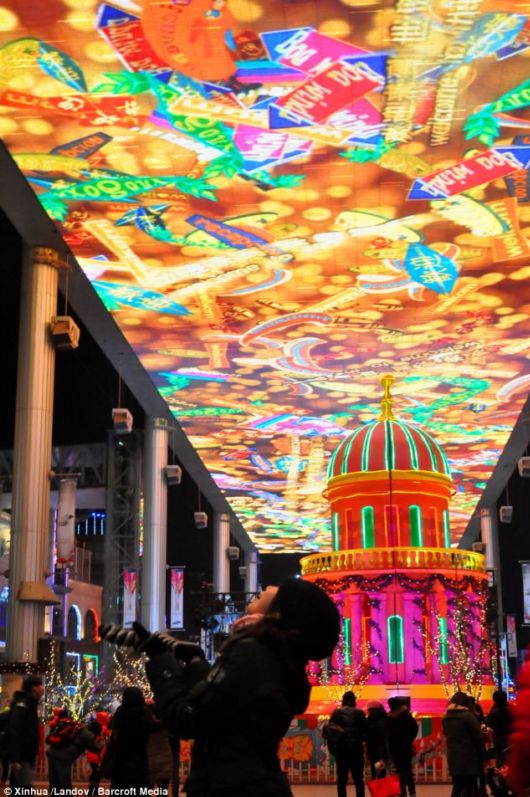 People look at a large screen at The Place, a shopping mall on December Eve in Beijing, China

In China, Christmas lights hung from trees outside the Xuanwumen Catholic Church as Chinese Catholics arrived for a Christmas Eve mass in Beijing.

Christians in China attend church masses as they prepare to celebrate the religious holiday to commemorate the birth of Christ.

Pope Benedict XVI marked Christmas Eve with Mass in St Peter’s Basilica and a pressing question: Will people find room in their hectic, technology-driven lives for children, the poor and God?

The pontiff also prayed that Israelis and Palestinians live in peace and freedom, and asked the faithful to pray for strife-torn Syria as well as Lebanon and Iraq.

The ceremony began at 10pm local time with the blare of trumpets, meant to symbolise Christian joy over the news of Christ’s birth in Bethlehem.

As midnight neared, church bells tolled throughout Rome, while inside the basilica, the sweet voices of the Vatican’s boys’ choir resounded joyously.

Christmas Eve Mass at the Vatican traditionally began at midnight, but the start time was moved up years ago so as to give the 85-year-old pontiff more time to rest before his Christmas Day speech.

That address is to be delivered at midday tomorrow from the basilica’s central balcony. 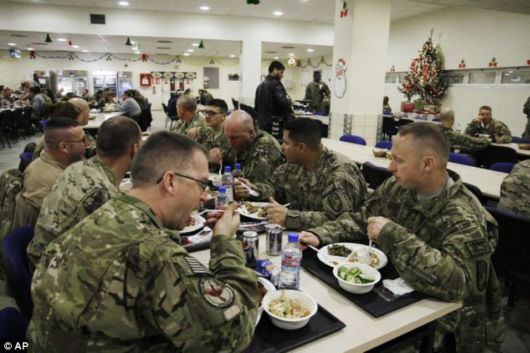 U.S. soldiers and service members with the NATO- led International Security Assistance Force take their dinner at a dinning hall on Christmas Eve at the U.S.-led coalition base in Kabul, Afghanistan 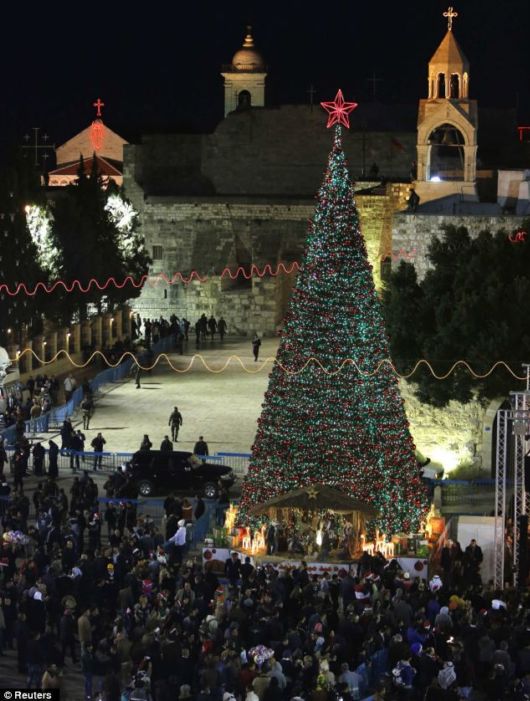 Manger Square, outside the Church of the Nativity, the site revered as the birthplace of Jesus, is seen on Christmas eve in the West Bank town of Bethlehem 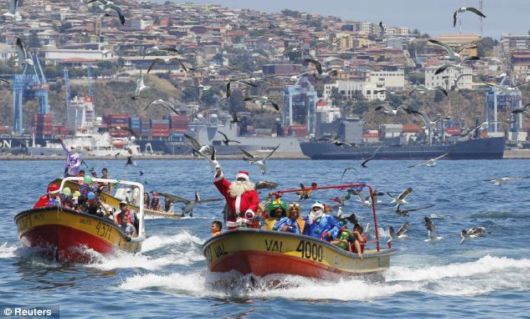 Ruben Torres, dressed in a Santa Claus outfit, and fishermen wave to people from a boat on Christmas Eve along the coast of Valparaiso city, about 75 miles northwest of Santiago 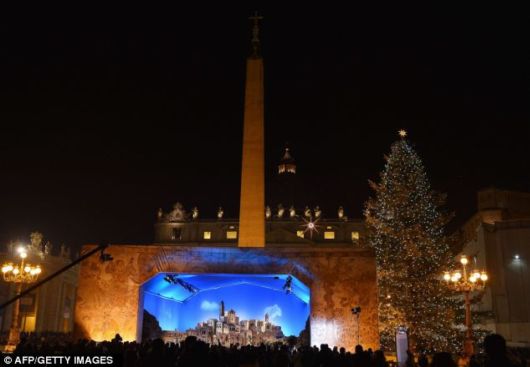 People admire the crib in St Peter’s Square in the Vatican after the unveiling ceremony. Pope Benedict XVI will celebrate a late Christmas night holy mass at St Peter’s Basilica to mark the nativity of Jesus Christ 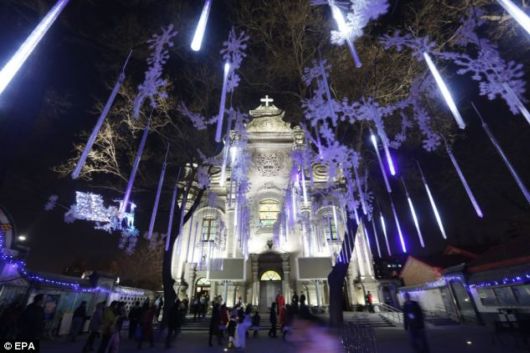 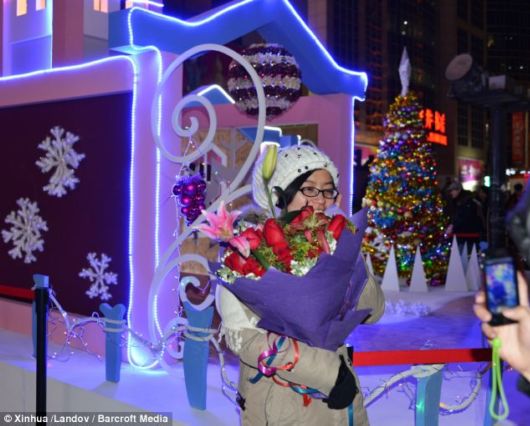 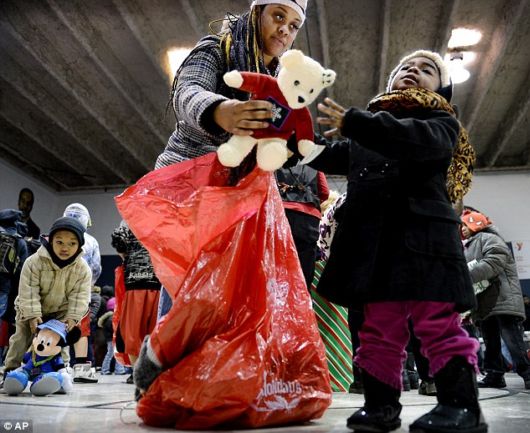 Little hands: Autumn Purnell, 2, stretched her hands out to hug a new teddy bear at the Linwood Family YMCA in Kansas City, Missouri on Monday 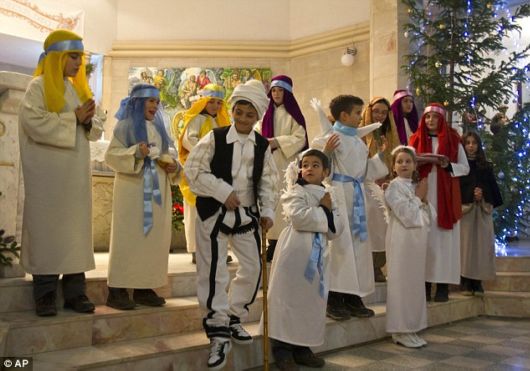 Southeastern Europe: Kosovo Catholic children take part in a play during a Christmas mass at St. Anthony church in Pristina on Tuesday morning 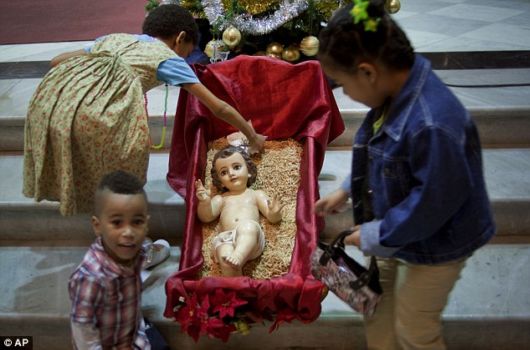 Cuba: Children play around a statue depicting baby Jesus after a Christmas Eve Mass to reenact his birth at the Cathedral in Havana 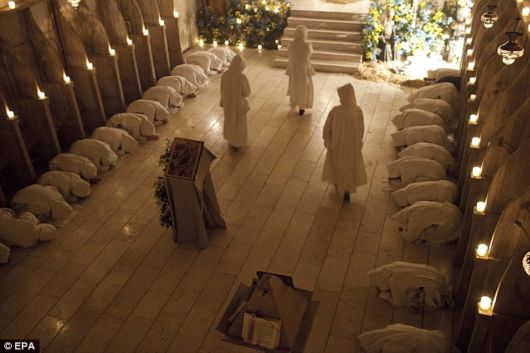 Israeli nuns: Catholic nuns from the Sisters of Bethlehem pray during midnight mass to mark Christmas in the Beit Jamal Monastery near Jerusalem 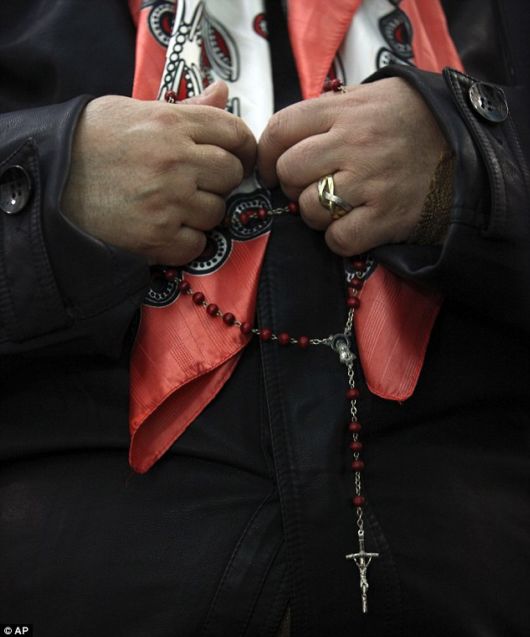 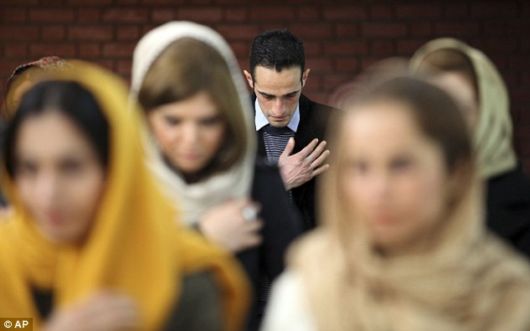 Religious protection: Iranian Christians pray in the Christmas mass at the Saint Mary Chaldean- Assyrian Catholic church, in Tehran thanks to the country’s constitution that protects status to Christians, Jews and Zoroastrians 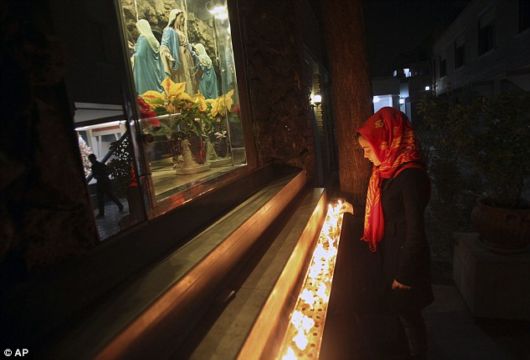 Practicing: A female Iranian Christian lights a candle beneath a red and gold scarf at the Saint Mary Chaldean- Assyrian Catholic church